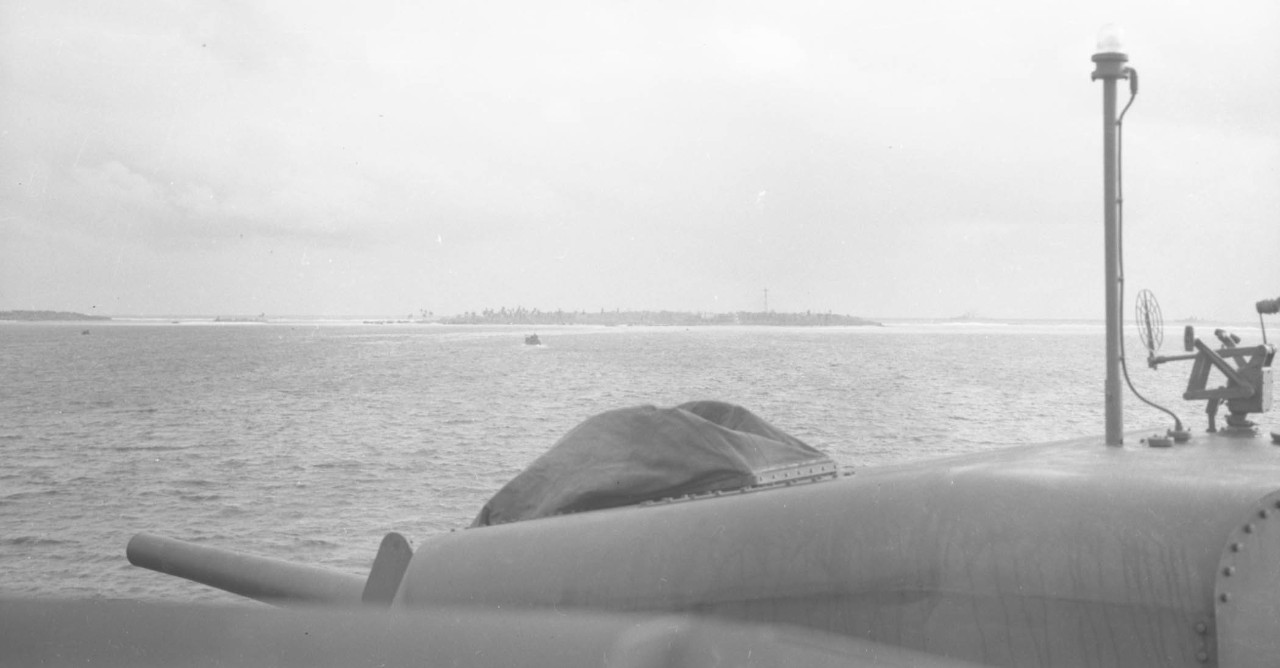 John Vincent Johnston of Cincinnati, Ohio, entered the Navy in September 1861 as First Master in gunboat St. Louis. He assisted in the Union gunboat attacks that captured strategic Fort Henry on the Tennessee River 6 February 1862. The night of 1 April 1862 he was the Navy commander of a combined Army-Navy boat expedition from St. Louis which landed and spiked the guns of Fort No. 1 above the Confederate stronghold, Island No. 10. He was promoted to Acting Volunteer Lieutenant for gallantry in this expedition. After joining in the bombardments of Vicksburg, he took command of Forrest Rose to patrol the Mississippi and its tributaries. On 15 February 1864 his gunboat repelled the attack of confederate raiders, saving the town of Waterproof, La., and its federal garrison. Lt. Johnston resigned from the naval service 23 June 1864 and died 23 April 1912 at St. Louis, Mo.

The day Johnston commissioned, Comdr. Evans made a speech to the crew: "This is going to be a fighting ship. I intend to go in harm's way, and anyone who doesn't want to go along had better get off right now." During the Marshall Islands campaign 3 months later, Johnston bombarded the beaches at Kwajalein 1 February 1944. and made a 5-day bombardment of Eniwetok 17 to 22 February. She gave direct support to invasion troops there, destroying several pillboxes and taking revetments along the beach under fire. En route to patrol duty in the Solomons 28 March 1944, she bombarded Kapinga-marangi Atoll in the Carolines. An observation tower, several blockhouses, pillboxes and dugouts along the beach were shelled. Two days later she came into the mouth of the Maririca River, southeast of Empress Augusta Bay, Bougainville, Solomon Islands. After laying a heavy barrage into that area, she took up antisubmarine patrol off Bougainville. During this duty 15 May 1944, she depth charged and sank Japanese submarine I-176.

After 3 months of patrol in the Solomons, Johnston sailed to the Marshalls to prepare for the invasion and capture of Guam in the Marianas. On 21 July 1944 she teamed up with that Pearl Harbor "ghost", Pennsylvania (BB-38), to bombard Guam. The destroyer had sent in more than 4,000 rounds of shells by 29 July. Her accurate gunfire shattered the enemy 4-inch battery installations, numerous pillboxes and buildings Johnston next helped protect escort aircraft carriers providing air support for the invasion and capture of the Palau Islands.

Now the time had come for General MacArthur's long awaited return to the Philippines. Following replenishment at Seeadler Harbor, Manus, Admiralty Islands, she sailed 12 October 1944 to help protect the escort carriers maintaining air supremacy over eastern Leyte and the Gulf, sweeping the enemy off local airfields, giving troops direct support on the landing beaches from 20 October, and even destroying vehicle transport and supply convoys on the roads of Leyte itself. Johnston was operating with "Taffy 3" (Escort Carrier Task Unit 77.4.3) comprising Rear Admiral Clifton A. F. Sprague's flagship Fanshaw Bay (CVE-70), five other escort carriers, three destroyers including herself, and four destroyer-escorts. "Taffy 3" was one of the three units of Rear Admiral Thomas L. Sprague's Escort Carrier Task Group 77.4 known by their voice calls as "Taffy 1," "Taffy 2," and "Taffy 3."

The morning of 23 October 1944 American submarines detected and attacked units of the Japanese fleet coming in from the South China Sea toward the precarious Leyte Beachhead. The battleship-cruiser-destroyer Southern Force was decimated as it attempted to enter Leyte Gulf via Surigao Strait the night of 24-25 October 1944. The more powerful battleship-cruiser-destroyer Center Force had been pounded by Admiral Halsey's attack carrier planes and presumably turned back from San Bernardino Straits. Admiral Halsey then raced north with his attack carriers and heavy battleships to engage a Japanese carrier-battleship task force off Cape Engano. This left Johnston and her small escort carrier task unit lonely sentinels in north Leyte Gulf, east of Samar and off San Bernadino Strait.

As enemy ships fled the Battle of Surigao Strait at daybreak of 25 October 1944, the powerful Japanese Center Force slipped through San Bernadino Strait and into Leyte Gulf. It steamed along the coast of Samar directly for Johnston's little task unit and the American invasion beachhead at Leyte, hoping to destroy amphibious shipping and American troops on shore.

One of the pilots flying patrol after dawn alert of 25 October 1944 reported the approach of Japanese Center Force. Steaming straight for "Taffy 3" were 4 battleships, 7 cruisers, and at least 12 destroyers. Johnston's gunnery officer later reported "We felt like little David without a slingshot." In less than a minute Johnston was zigzagging between the six little escort carriers and the Japanese fleet and putting out a smoke screen over a 2,500-yard front to conceal the carriers from the enemy gunners: "Even as we began laying smoke, the Japanese started lobbing shells at us and the Johnston had to zigzag between the splashes.... We were the first destroyer to make smoke, the first to start firing, the first to launch a torpedo attack...."

For the first 20 minutes, Johnston was helpless as the enemy cruisers and battleships had her in range. But the destroyer's 5-inch guns could not yet reach them. She charged onward to close the enemy: first a line of seven destroyers; next, one light and three heavy cruisers, then the four battleships. To the east appeared three other cruisers and several destroyers.

As soon as range closed, Johnston opened her 5-inch battery on the nearest cruiser, scoring damaging hits. About this time an 8-inch shell landed right off her bow, its red dye splashing the face of Johnston's gunnery officer, Lt. Robert C. Hagen. He mopped the dye from his eyes while remarking: "Looks like somebody's mad at us!" In 5 furious minutes Johnston pumped 200 rounds at the enemy, then Comdr. Evans ordered, "Fire torpedoes !" The destroyer got off 10 torpedoes then whipped around to retire behind a heavy smoke screen. When she came out of the smoke a minute later, Japanese cruiser Kumano could be seen burning furiously from torpedo hits. Kumano later sank. But Johnston took three 14-inch shell hits from a battleship followed closely by three 6-inch shells from a light cruiser: "It was like a puppy being smacked by a truck. The hits resulted in the loss of all power to the steering engine, all power to the three 5-inch guns in the after part of the ship, and rendered our gyro compass useless." Through "sheer providence" a rainstorm came up; and Johnston "ducked into it" for a few minutes of rapid repairs and salvage work.

At 7:50 a.m., Admiral Sprague ordered destroyers to make a torpedo attack. But Johnston had already expended torpedoes. With one engine, she couldn't keep up with the others: "But that wasn't Comdr. Evans' way of fighting: 'We'll go in with the destroyers and provide fire support,' he boomed." Johnston went in, dodging salvos and blasting back. As she charged out of blinding smoke, pointed straight at the bridge of gallant Heerman (DD-532), "All engines back full!" bellowed Comdr. Evans. That meant one engine for Johnston who could hardly do more than slow down. But Heerman's two engines backed her barely out of the collision course, Johnston missed her by less than 10 feet. Now there was so much smoke that Evans ordered no firing unless the gunnery officer could see the ship. "At 8:20, there suddenly appeared out of the smoke a 30,000-ton Kongo-class battleship, only 7,000 yards off our port beam. I took one look at the unmistakable pagoda mast, muttered, 'I sure as hell can see that!" and opened fire. In 40 seconds we got off 30 rounds, at least 15 of which hit the pagoda superstructure.... The BB belched a few 14-inchers at us, but, thank God, registered only clean misses."

Johnston soon observed Gambier Bay (CVE-73) under fire from a cruiser: "Comdr. Evans then gave me the most courageous order I've ever heard: 'Commence firing on that cruiser, draw her fire on us and away from Gambier Bay'." Johnston scored four hits in a deliberate slugging match with a heavy cruiser, then broke off the futile battle as the Japanese destroyer squadron was seen closing rapidly on the American escort carriers. Johnston outfought the entire Japanese destroyer squadron, concentrating on the lead ship until the enemy quit cold, then concentrated on the second destroyer until the remaining enemy units broke off to get out of effective gun range before launching torpedoes, all of which went wild.

American survivors of the Battle off Samar are rescued by a U.S. Navy ship on 26 October 1944. Some 1,200 survivors of Gambier Bay (CVE-73), Hoel (DD-533), Johnston (DD-557) and Samuel B. Roberts (DE-413) were rescued during the days following the action. Photographed by U.S. Army Private William Roof. Photograph from the Army Signal Corps Collection in the U.S. National Archives. Catalog#: SC 278010.

Johnston took a hit which knocked out one forward gun, damaged another, and her bridge was rendered untenable by fires and explosions resulting from a hit in her 40mm. ready ammunition locker. Evans shifted his command to Johnston's fantail, yelling orders through an open hatch to men turning her rudder by hand. At one of her batteries a Texan kept calling "More shells! More shells!" Still the destroyer battled desperately to keep the Japanese destroyers and cruisers from reaching the five surviving American carriers: "We were now in a position where all the gallantry and guts in the world couldn't save us, but we figured that help for the carrier must be on the way, and every minute's delay might count.... By 9:30 we were going dead in the water; even the Japanese couldn't miss us. They made a sort of running semicircle around our ship, shooting at us like a bunch of Indians attacking a prairie schooner. Our lone engine and fire room was knocked out; we lost all power, and even the indomitable skipper knew we were finished. At 9:45 he gave the saddest order a captain can give: 'Abandon Ship.'... At 10:10 Johnston rolled over and began to sink. A Japanese destroyer came up to 1,000 yards and pumped a final shot into her to make sure she went down. A survivor saw the Japanese captain salute her as she went down. That was the end of Johnston."

From Johnston's complement of 327, only 141 were saved. Of 186 lost, about 50 were killed by enemy action, 45 died on rafts from battle injuries; and 92, including Comdr. Evans, were alive in the water after Johnston sank, but were never heard from again.

Hoel (DD-533) and Samuel B. Roberts (DE-113) also sacrificed themselves to save the escort carriers and to protect the landings at Leyte. Two of four Japanese heavy cruisers were sunk by combined surface and air attacks; and Rear Admiral Clifton A. F. Sprague was soon amazed by the sight of the retirement of Kurita's entire fleet. By this time planes of "Taffy 2" and Taffy 1" and every available unit of the Fleet were headed to assisting the fighting "Taffy 3." But Johnston and her little escort carrier task unit had stopped Admiral Kurita's powerful Center Force in the Battle off Samar, inflicting a greater loss than they suffered.

Johnston's supreme courage and daring in the Battle off Samar won her the Presidential Unit Citation as a unit of "Taffy 3" (Task Unit 77.4.3). Comdr. Ernest E. Evans was posthumously awarded the Congressional Medal of Honor: "The skipper was a fighting man from the soles of his broad feet to the ends of his straight black hair. He was an Oklahoman and proud of the Indian blood he had in him. We called him-though not to his face-the Chief. The Johnston was a fighting ship, but he was the heart and soul of her."