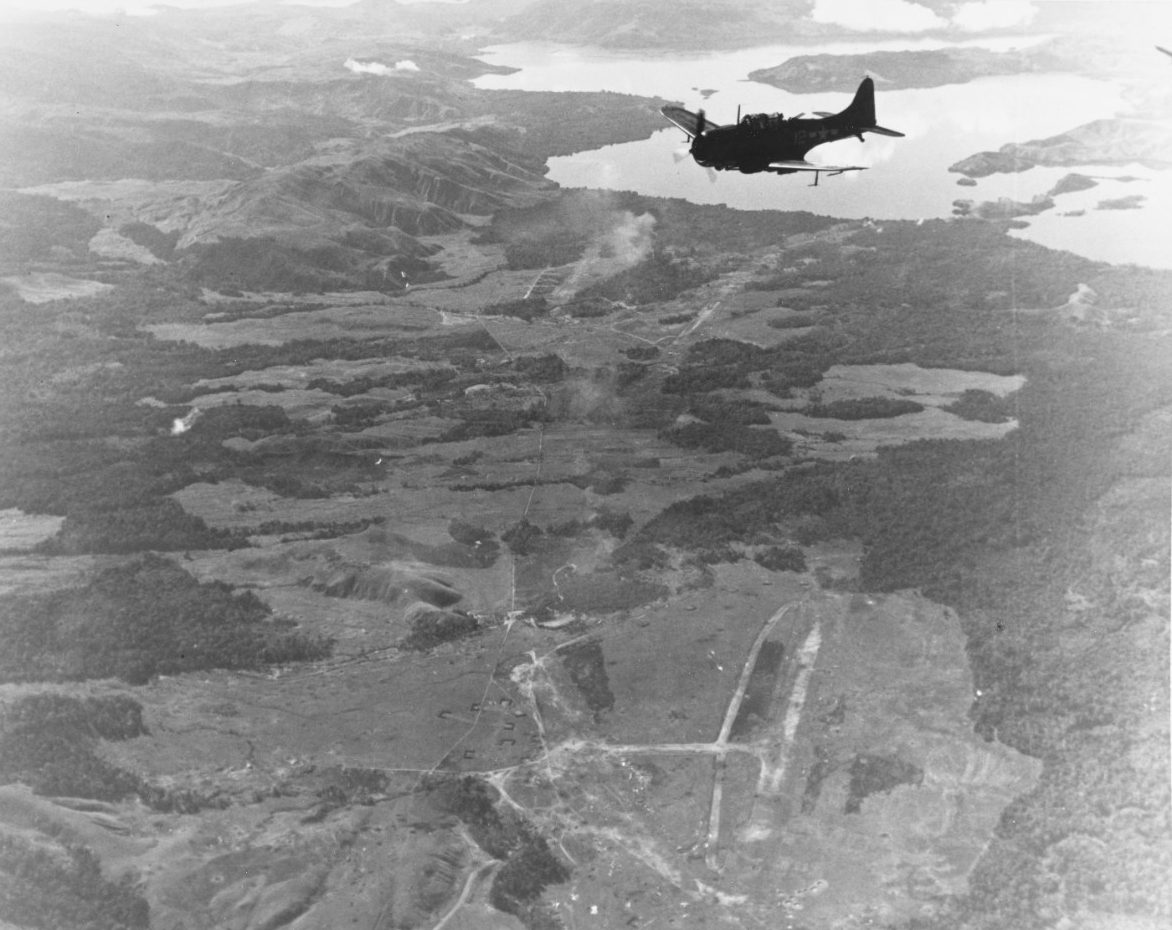 The Navy played a crucial role in operations to take Japanese airfields near the north coast of New Guinea in April 1944. The main operations — Reckless, which aimed for the conquest of Hollandia and nearby airfields, and Persecution, which focused on the landing strips near Aitape—succeeded in securing northern New Guinea and Allied progress toward the Philippines and the Japanese home islands.[1]

The spring 1944 fight for northern New Guinea’s airfields was in part a product of the Casablanca Conference, the January 1943 meeting of U.S. President Franklin D. Roosevelt, British Prime Minister Winston Churchill, and members of the French government-in-exile.[2] At the conference, Roosevelt and Churchill resolved to work together to attack Japan on multiple fronts in the Pacific and to take Japanese bases in New Guinea.[3] This push would be part of a wider effort to weaken the Japanese in three ways: first, to divert their attention to the Southwest Pacific in time for the Allies to strike in the north; second, to eliminate the Japanese southwest-Pacific–area headquarters at Rabaul; and third, to reconquer the Philippines, under Japanese occupation since 1942.[4] 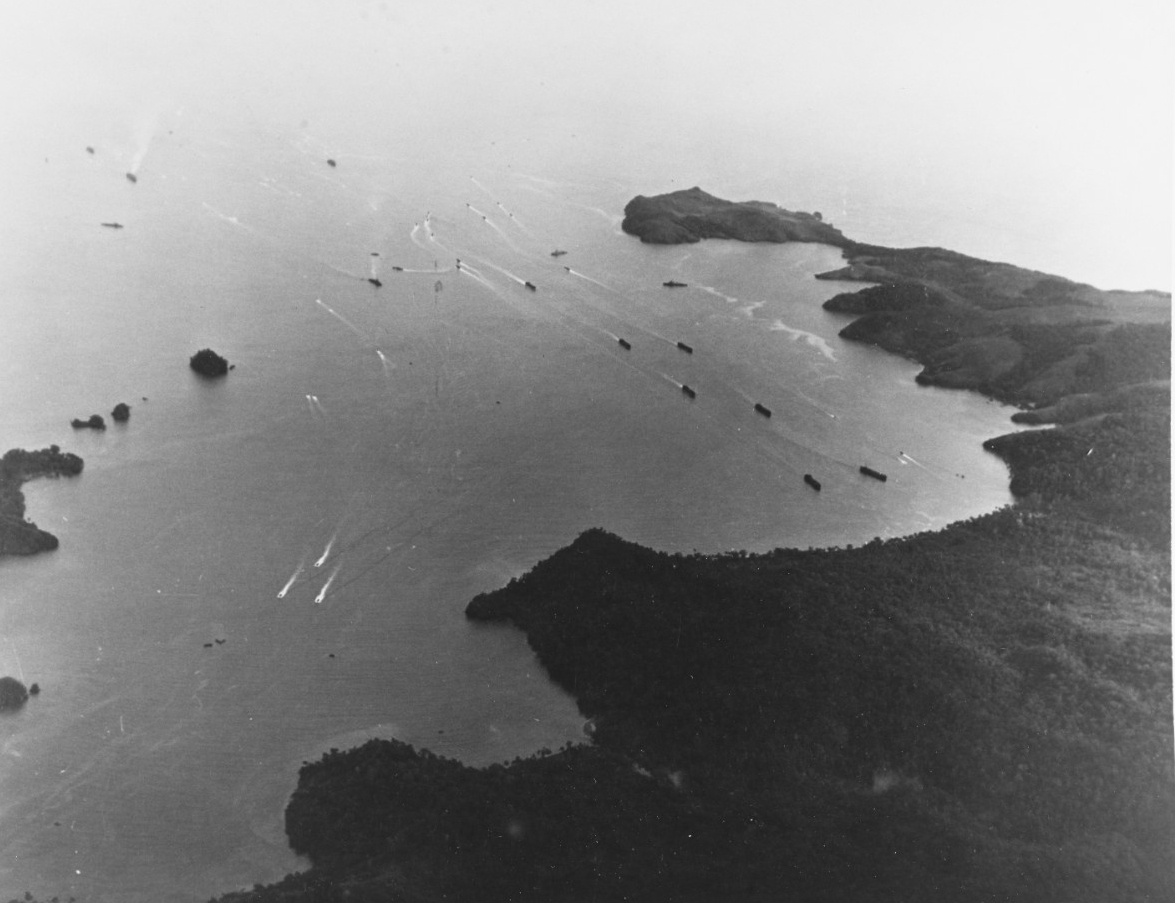 LST's and other landing craft approach the beaches at Tanamerah Bay, 22 April 1944. LST's are heading for beach Red Two, in right center. A few smaller craft are bound for beach Red One, at extreme lower left. Three destroyers and other shipping are standing by (80-G-325108).

From the U.S. Navy’s perspective, taking Hollandia and Aitape was crucial to isolating Japanese forces in Wewak, also on the north coast of New Guinea, and Rabaul; to controlling the 600-mile line stretching from Truk to Guam; and to launching further offensives to the north and west.[5] In these airfields, the Allies would finally get the heavy-bomber bases necessary for MacArthur’s push to the Philippines and Admiral Chester W. Nimitz’s progress toward the Marianas and Palau.[6] And so, early in 1944, General Douglas MacArthur, Supreme Commander of Allied Forces in the Southwest Pacific Area, and Admiral William Frederick Halsey Jr., the Navy’s commander for the South Pacific, worked out plans for what would become Operations Reckless and Persecution, the conquest of northern New Guinea and its valuable airfields.

Operations Reckless and Persecution would also allow the Allies to bypass and isolate Japanese forces at Wewak. Hollandia and Aitape lay well past Wewak, about 125 and 75 miles farther west, respectively. These plans reflected the island-hopping strategy that was to help the Allies win the war in the Pacific: Conduct operations well past the enemy’s most fortified bases—in essence, bypass and then isolate them—and don’t stop until the Japanese home islands.[7] The two operations did just that with respect to Wewak, the largest Japanese airbase on mainland New Guinea, and to Rabaul, even farther east, on the island of New Britain.

For Operations Reckless and Persecution, most of which fell under the command of Rear Admiral Daniel E. Barbey, Task Force 77 would provide amphibious support for landings of several Army divisions.[8] Task Force 58, the Fast Carrier Task Force under Vice Admiral Marc A. Mitcher, would provide air support.[9] 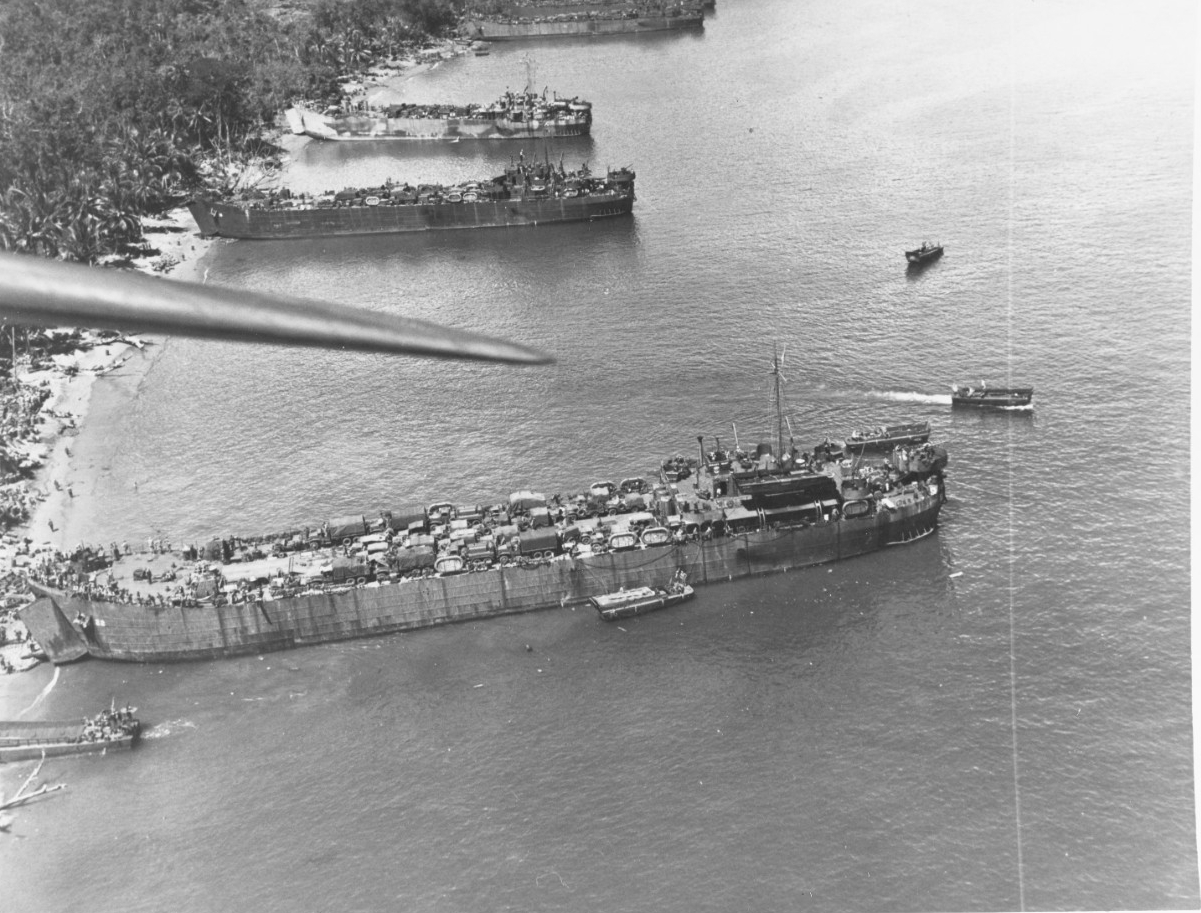 By the time Task Force 58’s aviators arrived over the airfields, however, most of the Japanese planes already lay burned out and broken on the ground.[11] The air war over Hollandia had been underway since 30 March and destroyed as many as 350 aircraft by the time of the Task Force 58 raids of 21 April.[12]

Meanwhile, Operations Reckless and Persecution opened with barrages from U.S. Navy, Royal Navy, and Royal Australian Navy vessels.[13] These and the rest of the invasion force had departed Finschhafen, in eastern New Guinea, and nearby Goodenough Island between 16 and 18 April and managed a rendezvous with carriers from Task Force 58 on the morning of 20 April. The flotilla then proceeded westward, about 80 miles north of the coast of New Guinea, until dusk, when the course changed to the southwest, toward Hollandia. After dark, Task Group 77.3 detached and made way for Aitape and Operation Persecution. The rest of the force continued to Hollandia for the larger Operation Reckless.[14]

Amphibious landings occurred on 21 April at 7:00 a.m. (Humboldt Bay) and 7:45 a.m. (Tanahmerah Bay) and on the following day at 6:45 a.m. (Aitape).[15] The Soldiers met only scant resistance, almost all Japanese personnel having fled the scene before the Americans’ arrival. When the landing at Tanahmerah Bay bogged down, it was because of mud and not enemy fire.[16] 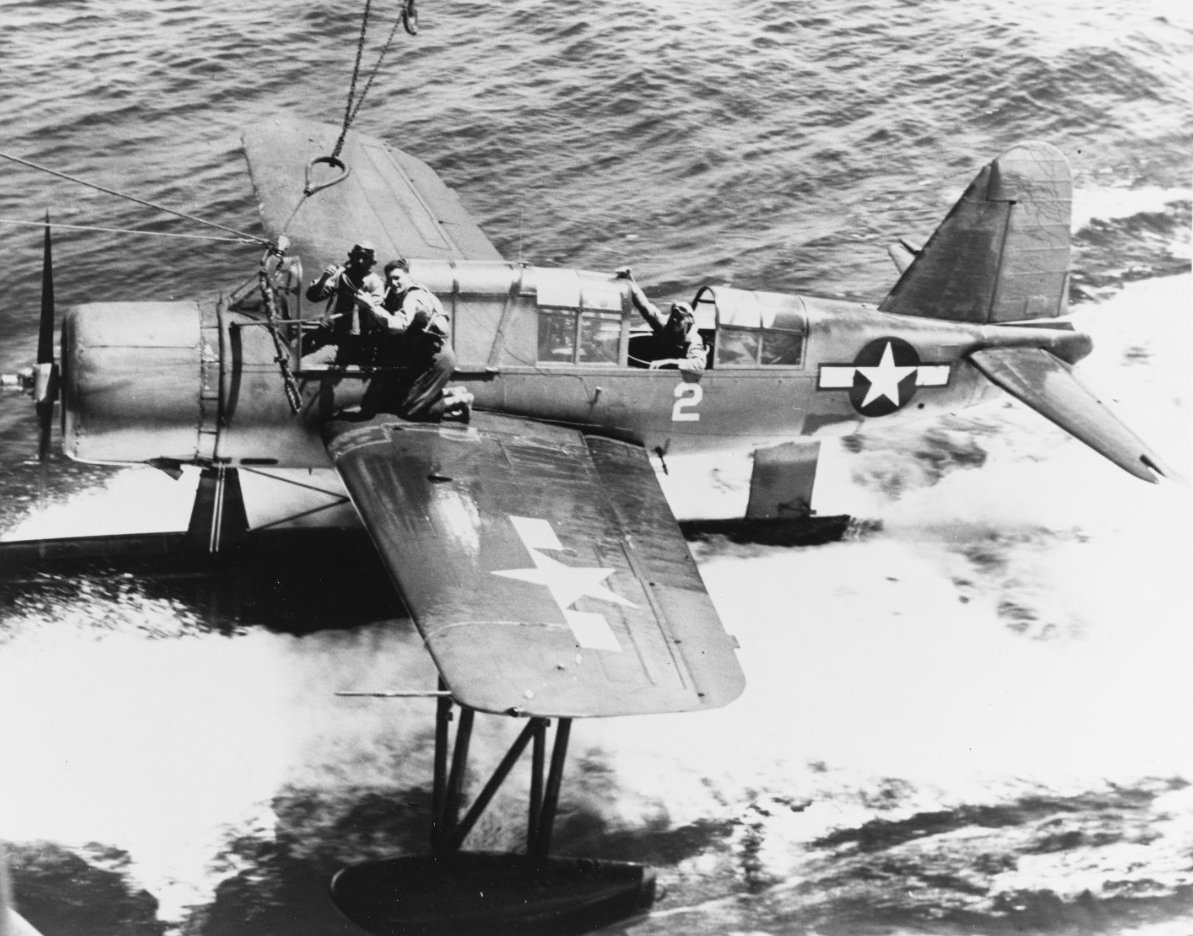 USS Boston (CA-69) OS2U Kingfisher floatplane returns to the cruiser after rescuing a crewman of a downed TBF bomber, during raids on Japanese targets in the Hollandia Area, 21 April 1944. ARM2c W. R. Kesey is on the wing. AOM3c B. A. Kanitcer is in the rear cockpit. The OS2U's pilot is not identified (80-G-K-13350).

In the six weeks or so after landing, U.S. Army Soldiers completed mopping-up operations against Japanese stragglers with total losses to the Americans of 124 killed, 28 missing, and 1,057 wounded. Japanese forces suffered at least 3,300 killed and 611 taken prisoner. [17]

The U.S. Army and U.S. Navy, with the help of Allied engineers, began in early June to develop bases in and around Hollandia. Humboldt Bay got a naval advance base with supply and ammunition depots, ship repair and unloading facilities, and other support installations. Tanahmerah Bay accommodated a new fuel depot. These bases, as well as the airfields around nearby Lake Sentani, soon became an invaluable staging area for the Philippines Campaign of 1944–45.

[1] Hollandia and its environs were claimed by the Dutch in 1910. Aitape and the surrounding area had been part of the German Empire until World War I; the territory then came under Australian control. Hollandia and Aitape fell to Japanese occupation in 1942. In this analysis, “Hollandia” refers to the town of Hollandia (now the city of Jayapura) and the region it anchored, from Tanahmerah Bay in the west to Humboldt Bay in the east, including Lake Sentani in the south and the airfields around it. Similarly, “Aitape” refers to that town and the airfields and anchorages nearby. See Gordon L. Rottman, World War II Pacific Island Guide: A Geo-Military Study (Westport, CT: Greenwood, 2002), 228.

[3] The published proceedings of the Casablanca Conference do not call for the occupation of Hollandia and Aitape as such, the main objective being Japanese bases to the east. In the service of that objective and in response to changing conditions, however, Hollandia and Aitape became the focus by 1944. See Casablanca Conference, January 1943: Papers and Minutes of Meetings, edited and printed by the Office of the Combined Chiefs of Staff (Washington, DC, 1943), C.C.S. 153, “Enclosure A” under “Situation to Be Created in the Eastern Theater (Pacific and Burma) in 1943,” PDF e-Book.

[17] Ibid., 233. A real battle broke out later, on the night of 10/11 July, and focused on the Driniumor River several miles inland; by the middle of August, however, the Japanese attack had been repulsed. See Levine, Pacific War, 118; Kirby, War Against Japan, 423.