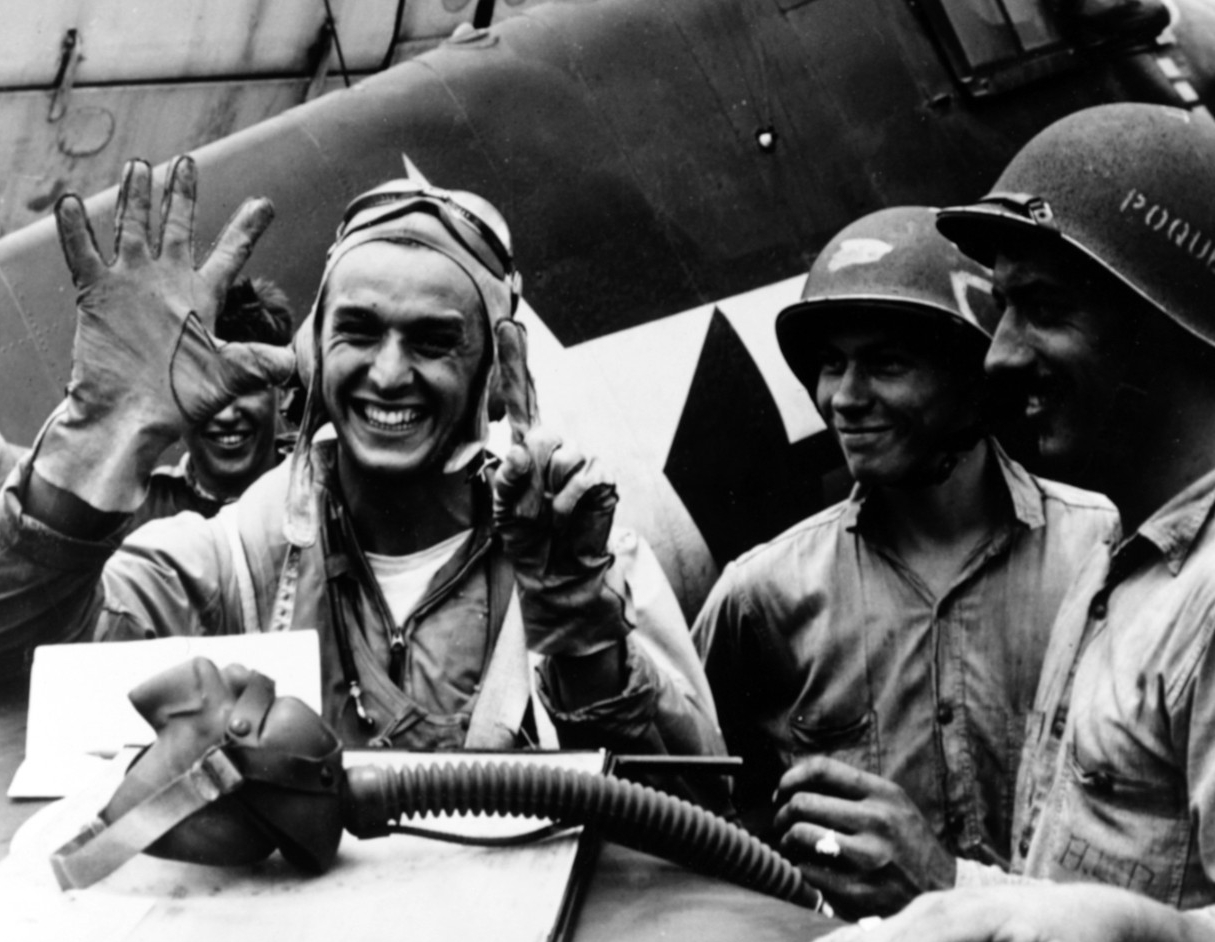 The U.S. Navy’s offensive in the Central Pacific gathered tremendous strength in early 1944 and moved to within striking distance of Japan. With the threat of an American push into the Marianas Islands by June, the Imperial Japanese Navy (IJN) hoped to protect their home islands. Realizing the powerful American fast carrier task forces had to be stopped no matter the cost, Japanese commanders again pinned their hopes on a plan for a decisive battle. The island of Saipan, only 1,200 nautical miles south of Tokyo, would give American forces a prime location from which to stage air strikes. Thirteen miles long and less than half that distance at its widest point, Saipan was home to three Japanese airfields, with “room for more.” American commanders intended to destroy the IJN, take Saipan, and allow the new B-29 bombers to pummel Japan into submission. The U.S. Navy would accomplish this, and more, as Japan’s carrier force and air power was forever eliminated in the Battle of the Philippine Sea.1

The American move into the Marianas convinced Japan’s naval commanders the time for the decisive battle had come. Previous naval battles at Coral Sea (4–8 May 1942), Midway (4–7 June 1942), Eastern Solomons (24–25 August 1942), and Santa Cruz (25–27 October 1942) proved to both sides that aircraft carriers had become the dominant warship in the Pacific Theater. Admiral Soemu Toyoda, commander in chief of the Combined Fleet, ordered Vice Admiral Jisaburo̅ Ozawa to implement Operation A-Go and accomplish what Japan had failed to do two years earlier at Midway.

While Admiral Ozawa mustered 440 aircraft in nine flattops, his opponent Admiral Raymond Spruance commanded 905 fighters, torpedo, and dive bombers from 15 carriers (including six of the new 27,000-ton Essex-class) under Vice Admiral Marc Mitscher, commander of Task Force 58 (TF 58). Mitscher’s fast carriers included nearly 100,000 Sailors and fliers against Ozawa’s force of 30,000. Unable to replace the many veteran pilots lost to attrition from Coral Sea and Midway through Guadalcanal and the Solomons campaign, the Japanese realized the coming fight could be their last. The U.S. Navy, retaining a coherent system for replacing aviators, rotated experienced pilots from the theater and back to the United States to train new pilots and aircrew.2

Vice Admiral Ozawa established the First Mobile Fleet on 1 March 1944. Nicknamed “Gargoyle,” as he was known for being the third-ugliest admiral in the IJN, Ozawa advocated concentrating Japan’s carriers into a single, unified striking force—the first of its kind anywhere in the world. Organizing the Mobile Fleet into three units, he personally led A Force—built around Carrier Division 1—led by his flagship Taiho̅. The commander of Force B, with Carrier Division 2, was Rear Admiral Takaji Joshima. A veteran of the fierce battles around Guadalcanal, Joshima led the 26,900-ton sister ships Jun'yo̅ and Hiyo̅ with light carrier Ryu̅ho̅. The vanguard, C Force, was led by Vice Admiral Takeo Kurita. Rear Admiral Sueo Obayashi led Carrier Division 3 in the light carrier Zuiho̅. Additionally, his command included the 15,000-ton small carriers Chitose and Chiyoda, as well as battleship Hyu̅ga.

By 18 June 1944, U.S. operations in the Marianas were well underway. Some 50,000 American Marines and Soldiers were ashore on Saipan. Having achieved local control of the air in the Marianas area, repeated attacks on Japanese airfields were made to maintain air superiority. Although impossible to destroy all enemy defenses on or near the airfields, other Japanese air bases to the north and south were attacked by carrier and land-based aircraft, which limited their ability to attack American forces. Admiral Mitscher’s fast carrier task forces maintained a covering position to the westward of the Southern Marianas, sending up daily air searches as well as combat air patrols (CAP). U.S. submarines were forward-deployed in order to obtain early information of Japanese fleet movements.

Admiral Ozawa steamed from Tawi Tawi on 13 June, shadowed by American submarines over the next several days. Reports of Japanese ship movements were sent to Admiral Spruance regularly, making him aware that two major enemy fleets were headed in his direction. Recalling the complexity of past Japanese plans for battle, Spruance wondered if one of the fleets was simply a tempting decoy meant to lure him from the main force. Causing further confusion, the submarine Cavalla (SS-244) reported on 17 June that Ozawa’s fleet had grown to include 15 ships . Spruance, unaware the two enemy fleets had already merged together, ordered the older battleships to remain and provide fire support while Lee’s fast battleships and Mitscher’s carriers steamed 180 miles west of Saipan to do battle.

The Battle of the Philippine Sea opened on 19 June, and rapidly progressed in favor of the Allies. Although both sides sent aircraft to locate opposing fleets, the Japanese found the Americans and struck first. Admiral Ozawa sent 43 aircraft out on a scouting mission, with one pilot spotting and reporting the location of Mitscher’s task force, 160 miles west of Saipan. Ozawa did not launch his planes all at once, but piecemeal, spacing groups out each hour. Believing his land-based aircraft would make up any disparity in numbers, Ozawa was unaware that the raids on 19 June against Japanese air bases on Guam, Saipan, and Tinian left him with far fewer planes than he actually possessed. The result for the Americans was a two-to-one advantage in airpower.

Throughout the day, Ozawa’s fighters and bombers came on in four successive waves to attack TF 58, but were devastated by the more experienced American fighters flying protection for the carriers. Flying off Lexington (CV-16), F6F Hellcat fighter pilot and highest-scoring Navy ace (at that time), Lieutenant (Junior Grade) Alexander Vraciu, dove into an enemy formation and shot down six Yokosuka D4Y “Judy” dive bombers in eight minutes (using only 360 rounds of ammunition). After landing back on “Lady Lex,” Vraciu spotted Admiral Mitscher looking down at him. Vraciu held up six fingers to symbolize his score against the enemy, the admiral smiled back, and a photographer captured the hugely grinning pilot re-staging the moment for posterity. A shipmate of Vraciu’s soon gave the highly one-sided battle its nickname, “The Great Marianas Turkey Shoot,” after wistfully exclaiming, “It was just like an old-time turkey shoot.”3

Despite being picked off by better-trained F6F Hellcats from the CAP, a few Judy dive bombers broke through to strike battleship South Dakota (BB-57). A second bomber scored a near-miss on cruiser Minneapolis (CA-36), and a third blew apart after smashing into Indiana (BB-58), striking her at the waterline. Although the damage to South Dakota was not extensive, 27 crewmembers were killed and 23 injured. Bunker Hill (CV-17) and Wasp (CV-18) were also attacked by Japanese dive bombers, resulting in near-misses from 500-pound bombs and the deaths of two officers and an enlisted man by shrapnel on board Bunker Hill. A further 85 men were wounded from bomb fragments on Wasp. In all, three of the four attacking enemy aircraft were shot down by antiaircraft fire.

While U.S. scout planes seemed unable to find Admiral Ozawa’s Combined Fleet, the American submarines following him finally sprang into action. At 0816, submarine Albacore (SS-218) targeted Ozawa’s own carrier group, firing a spread of six torpedoes. While four missed, a Japanese pilot deliberately flew his plane into one of the remaining two, causing a significant explosion. The sixth torpedo struck Ozawa’s flagship Taiho̅ in her starboard side, initially causing little harm. Inexperienced damage control measures led to gasoline fumes spreading around the carrier, setting off a number of catastrophic explosions. Taiho̅ suffered several secondary explosions before sinking, taking 1,650 men with her to the bottom. Admiral Ozawa survived, eventually transferring to the carrier Zuikaku, where he quickly planned to continue raids on Guam and Rota, despite having only 160 aircraft left at his disposal.

Carrier Sho̅kaku, veteran of the surprise attack at Pearl Harbor and participant in the Battle of the Coral Sea, was struck by three torpedoes from Cavalla. In the process of refueling and re-arming aircraft, the torpedo hits ignited fires that proved difficult to control. Struck by a bomb from American aircraft, aviation fuel vapors not contained by proper damage control procedures triggered a massive detonation leading to an order to abandon ship. Sho̅kaku quickly sank bow-first with the loss of 1,272 of her crew.

Admiral Mitscher finally received a sighting report late in the afternoon on 20 June, giving the approximate location of Ozawa’s fleet. Mitscher realized his enemy was 275 miles away, far out of the 200-mile fuel range for his bombers. Unbeknownst to the Americans, Admiral Ozawa had already begun pulling his fleet back, further increasing the distance between the warring navies. Due to the vast distance, Mitscher knew his airmen would run the risk of running out of fuel and be forced to ditch their aircraft at sea in the dark. Despite these considerations, he decided to risk all by launching his planes for an attack. Shortly after the bombers left, a second report came through stating the Japanese were more than 330 miles away. In spite of the message, Mitscher did not order his pilots to return to the carriers, but instead held further squadrons from taking off. Those aviators already on their way to attack the Combined Fleet set out on what came to be called the “Mission Beyond Darkness.”

As evening began to fall on 20 June, 216 Helldivers, Avengers, and Hellcats attacked Ozawa’s fleet. With only 75 planes protecting his ships, Ozawa looked on powerlessly as the small carrier Hiyo̅ sank along with 250 men, and carriers Zuikaku, Jun'yo̅, and Chiyoda, were heavily damaged. Twenty U.S. aircraft were destroyed in the attack by antiaircraft fire, while 65 of the 75 Japanese fighters were shot down. With darkness descending and the American pilots already low on fuel, they broke off further attacks to return home. Mitscher ordered his carriers to turn on all lights, a danger with enemy submarines lurking nearby. Although the attack on Ozawa’s fleet was an unequivocal success, the “long flight back and the night recovery,” were “disastrous.”4

Many U.S. Navy pilots had not received extensive training for night landings on carriers. The resulting 18 flight deck crashes by returning aircraft attested to this unfortunate oversight. Other pilots waiting for a chance to land back aboard their carrier, or a nearby alternate, were left circling until their fuel completely ran out, forcing them to ditch at sea. Nearby cruisers and destroyers typically serving as screens for the carriers quickly switched to rescue operations, and managed to recover 143 of 185 of the airmen forced down into the ocean. With darkness came the cessation of further naval operations. Admiral Mitscher desired to finish off the devastated Japanese fleet, but was denied by Spruance.5

The “greatest carrier battle of the war” ended with a defeated Admiral Ozawa in full retreat, with a significantly reduced force. The events of 19 June 1944 destroyed the naval air power of Japan, while the attack by U.S. forces the following day focused on the ships of the IJN, almost completely eliminated Japan’s remaining carrier force, wiped out its rebuilt air groups, and gave the American fast carrier task forces virtual control of the seas. For the loss of 123 aircraft and 109 dead, the U.S. destroyed nearly 600 enemy aircraft, sank two enemy fleet carriers, a light carrier, and two oilers, killing nearly 3,000 of the IJN’s pilots and sailors.6

June 1944 represented a conspicuous moment of military achievement for the Allied powers with historian Craig Symonds declaring, “June 1944 might well be labeled the decisive month of the entire Second World War.” As the Allies landed in Normandy, breaching Hitler’s Festung Europa, the Empire of Japan’s airpower suffered near annihilation in the Philippine Sea. The resulting B-29 air raids from Saipan, Guam, and Tinian quickly caused massive damage to the home islands’ population and industrial centers, and set the stage for the invasion of Iwo Jima in February 1945. In less than a year, Nazi Germany would finally surrender, ending the war in Europe. Japan stubbornly fought on until the atomic bombings of Hiroshima and Nagasaki forced her capitulation, bringing the war to its close. Several of the American warships taking part in the victorious fighting at the Battle of the Philippine Sea were present for the surrender ceremonies in Tokyo Bay on 2 September 1945.7