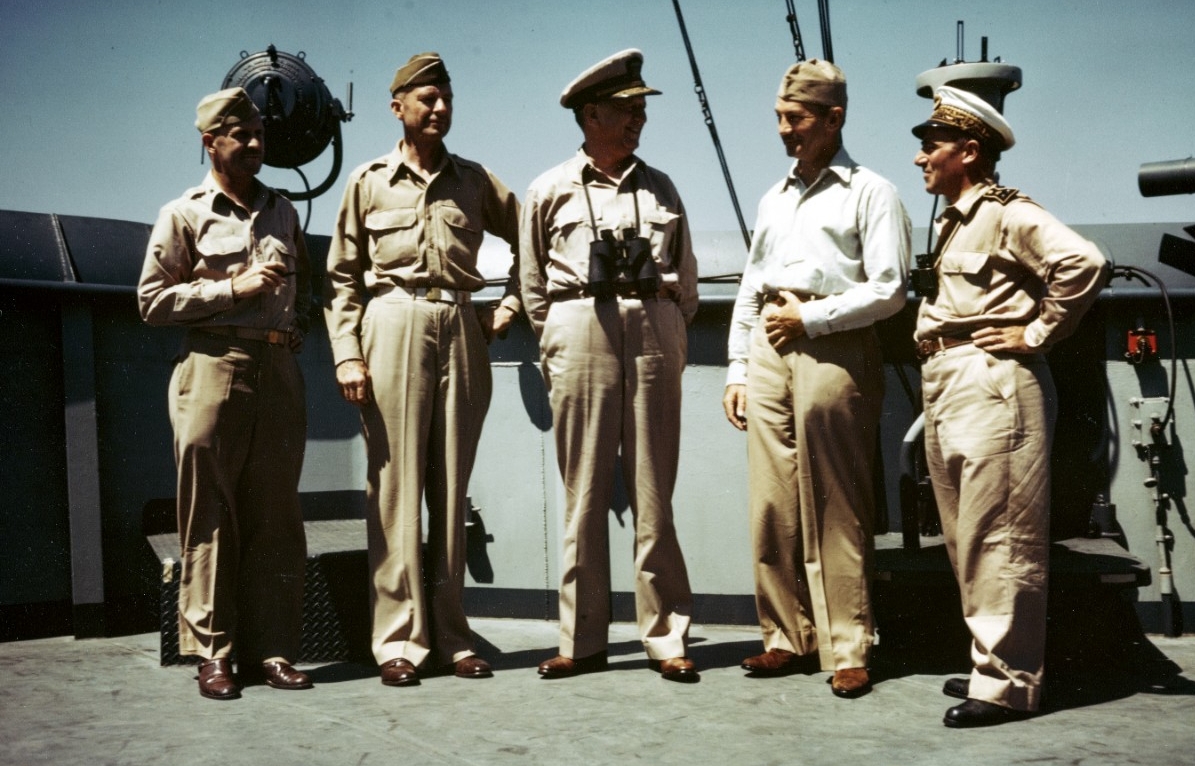 "If Tinian in the Pacific was the 'perfect amphibious operation' on a small scale,

Dragoon was the nearly faultless one on a large scale."

Rear Admiral Morison’s evaluation notwithstanding, Operation Dragoon almost did not occur. The U.S.-British Quadrant Conference, held in Quebec in August 1943, which set the time frame for the 1944 invasion of Normandy (Operation Overlord—“D-Day”), also discussed the proposed “Anvil,” a concurrent invasion of southern France. Anvil was viewed skeptically by the British, who maintained a cautious attitude toward any landing operations in German-occupied France and also felt that any Allied effort in the Mediterranean theater should be applied to operations in Italy or the Balkans as advocated by Winston Churchill. Anvil planning was again raised during the Allied Cairo and Teheran conferences, held 22 November through 1 December 1943, at which time the first viable date for the operation was set for May 1944. Anvil was linked both to successful execution of Overlord and to Allied progress in Italy—the attainment of the Pisa–Rimini line.

Although planning for Anvil had already begun, it was apparent by late January 1944 that ground operations in Italy were not progressing well. The Germans were resourceful, tenacious opponents, and Italy’s difficult terrain, adverse weather, and the miscalculations of several U.S. and British commanders had significantly slowed Allied movements. Moreover, initial optimism that the 22 January landings at Anzio (Operation Shingle) would alleviate the situation of the Allied forces bogged down south of Rome was misplaced. Finally, a projected European theater–wide shortage of amphibious shipping due to the extended maintenance of the Anzio beachhead and the resources required by Overlord served to push the date for Anvil back to July at the earliest. In this case, the operation’s utility to Overlord, scheduled for early June, was questionable. The British remained adamant about the need for ground reinforcements in Italy and indicated that renewed offensive movement in that country would not possible resume before mid-April. Finally, on 2 July—nearly a month after the Normandy landings—after much consultation between the U.S. Joint Chiefs of Staff and British Combined Chiefs of Staff, Anvil was approved and set for 15 August. The operation’s code name was changed to “Dragoon” on 27 July to ensure security. The British received the American agreement that Dragoon would be carried out without impact on manpower and material resources required in Italy.

At this point, the Overlord follow-on operations in northern France were going so well that any dispersal and disruption of German forces that would have been brought about by an earlier Anvil/Dragoon were no longer essential. Opening another front against Germany remained an objective of Dragoon, but with the recaptured northern French ports working at maximum capacity, the operation also aimed to secure additional French ports of entry for Allied forces, particularly for numerous fresh U.S. Army divisions.

The Cavalaire-Agay area, extending southwest from Antibes to Cap Benat along the French Côte d’Azur, was chosen for the landings. The stretch of coast provided good sea approaches, had not been mined extensively, was not heavily defended (many German formations were understrength and of mediocre quality), and was a suitable bridgehead for attacks on the strategic ports of Toulon and Marseilles farther to the southwest. The proximity of the landing area to Corsica (recaptured from the Germans in September 1943) was also advantageous, since additional tactical air-support assets were based there.

U.S. Eighth Fleet, commanded by Vice Admiral Henry Kent Hewitt, and the Royal Navy’s Mediterranean Fleet provided the amphibious lift, bombardment/fire support, mine warfare, naval air support, and special operations forces designated as the Western Task Force. (Torch, the 1942 invasion of French North Africa, with Dragoon were the only two operations in the European and Mediterranean theaters that included the employment of U.S. Navy carrier forces.) The task force also included a number of French and Polish combatants.

U.S. Seventh Army’s VI Corps provided the three U.S. infantry divisions (3rd, 45th, and 36th) that would carry out the initial assaults in landing sectors (respectively from southwest to northeast) Alpha, Delta, and Camel. Navy underwater demolition teams were to accompany the first wave of troops and remove underwater and beach obstacles. Two French armored divisions and five French infantry divisions, constituted from Free French troops in North Africa and equipped by the United States, were the D-day + 1 follow-on forces.

The U.S.-Canadian 1st Special Service Force, a specialized light infantry brigade, was assigned to capture Port Cros and Levant islands in the Sitka sector off Cap Benat, thus securing Dragoon’s left flank. French commandos were to capture key German coastal batteries in the Camel and Alpha sectors. Finally, the division-size 1st Airborne Task Force was to be dropped behind German lines between Camel and Delta sectors. This formation included a British parachute infantry battalion, the only British ground unit taking part in Dragoon.

As part of a general air offensive against southern France, Allied air forces had already begun bombing port facilities, coastal fortifications, bridges, and communications nodes in proximity to the landing areas at the end of April. These missions were conducted with steadily increasing intensity as of mid-May, with care taken not to give the Germans any indications of linkage between specific targets and impending landing operations. They continued until H-hour (0800) on 15 August, latterly in conjunction with the naval shore bombardment.

In anticipation of Anvil/Dragoon, amphibious training of units potentially slated as landing forces had been conducted near Salerno, Italy, since February. Much of the Western Naval Task Force itself was assembled and loaded in various port facilities surrounding the Bay of Naples, although the French armored formations sailed from Oran, Algeria. Landing craft convoys (LCIs and LCTs) staged from Ajaccio, Corsica. The carriers sailed from Malta, while bombardment and fire-support forces were concentrated at Malta, Palermo, Taranto, and Naples. Immediate follow-on convoys (D-day + 1) were to sail from Naples and Taranto. Amazingly, despite the expectation of some air attacks by the weakened German Luftwaffe, the huge assemblies of shipping remained unmolested. The first invasion convoy to get underway, primarily composed of LCTs, departed Naples on 9 August.

Vice Admiral Hewitt was a staunch advocate of pre-invasion bombardment support, rightly rejecting the view of some Allied commanders that pre-landing bombardments undermined the assault forces’ theoretical element of surprise (disproved in Operation Avalanche at Salerno). Thus, premised on the Germans sighting the invasion force by 14 August, a heavy naval bombardment, particularly of several coastal fortification complexes, was carried on for an hour prior to the first landings at 0800. Destroyers continued to provide close-in gunfire support throughout the landing operations. U.S. Navy and Royal Navy carrier aircraft provided air cover and support to the troops on the beaches.

The landings themselves were very successful and barely opposed. The Germans were already demoralized and disorganized by aerial and naval bombardment and, except for a strongpoint in the Camel sector that was eventually neutralized by a B-24 Liberator air strike, put up little resistance. By the evening of 17 August, the surviving German forces were in full retreat up the Rhone valley, continually harried by French Resistance fighters.

German air attacks on the landing forces were negligible, although an air-launched Henschel Hs-293 guided bomb sank LST-282 on 15 August. On 19 August, U.S. Navy F6F Hellcats and Royal Navy Seafires, on an armed reconnaissance mission, shot down five enemy bombers near Toulouse, to the west of the Dragoon landing areas.

Likewise, engagement by the already weak German naval forces in the Mediterranean was minor. A German torpedo boat flotilla based at Genoa, which could have sortied against the Western Task Force, remained in port. However, two German patrol vessels engaged and were sunk by USS Somers (DD-381) on 15 August off the island of Port Cros. On 17 August, to the northeast of the landing area off La Ciotat, USS Endicott (DD-495), PT boats, and gunboats of the U.S. Navy and British special operations forces, the so-called Beach Jumpers, were staging diversion operations (simulating a much larger force through shore bombardment, radio countermeasures, dummy message traffic, and reflector balloons). They were attacked by a German corvette and a patrol vessel, which concentrated their fire on Endicott. Despite being outgunned, Endicott, commanded by Medal of Honor recipient Lieutenant Commander John D. Bulkeley, emerged the victor. The special operations group then continued its original mission.

Following consolidation of the beachhead, the French forces headed southwest to capture Toulon and Marseille. In Toulon, heavy German resistance was encountered, but overcome by 26 August. In Marseille, German forces were harried by the French Resistance, which undercut the enemy’s command and control. By 29 August, the city was in Allied hands. Western Task Force ships provided gunfire support, targeting the old, but very solid, port fortifications. In both cities, the Germans were able to destroy or mine portions of the port facilities. At Marseille, the Marine detachments of USS Augusta (CL-31) and USS Philadelphia (CL-41) accepted the surrender of the German units defending the Frioul islands outside of the city’s harbor.

In spite of its uncertain antecedents, Dragoon was soundly conceived, based on hard lessons learned in previous amphibious operations. The British concerns about the Italian theater had limited the number of Allied ground forces, but the ably commanded naval and air forces involved—and German unpreparedness and disarray—had contributed to a surprisingly rapid battlefield success that achieved all of its tactical and strategic objectives in a minimum amount of time. 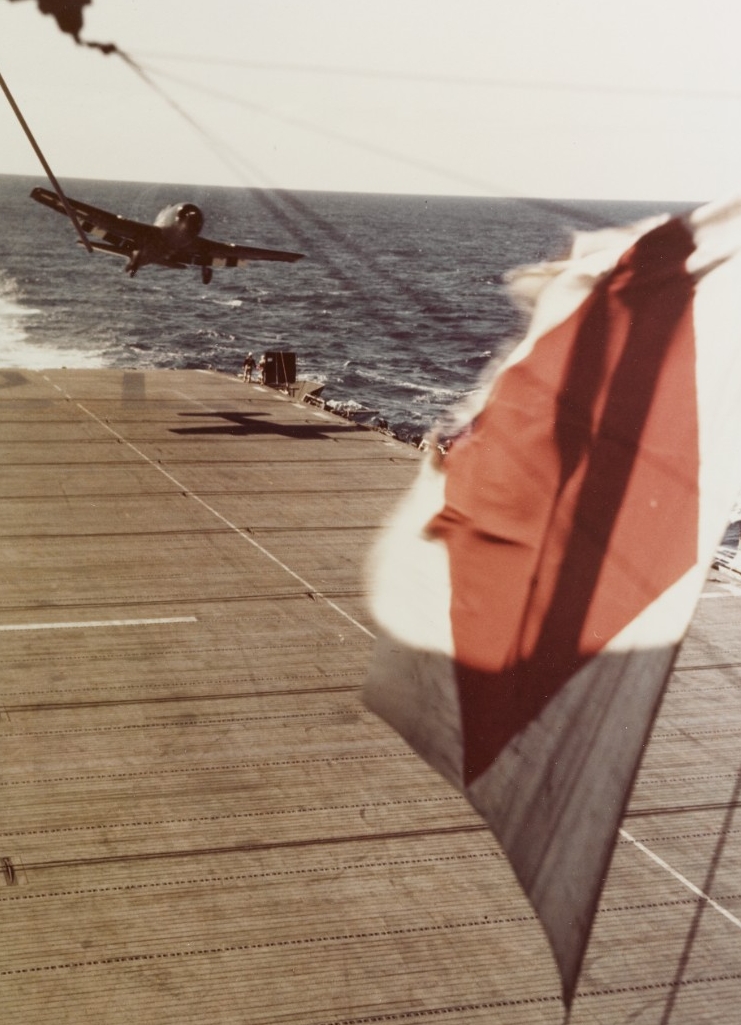 A U.S. Navy F6F Hellcat fighter is waved off during a landing attempt on USS Tulagi (CVE-72) after a close air support mission over southern France during Operation Dragoon, D-day, 15 August 1944 (80-G-K-15370).

Imagery and Other Resources 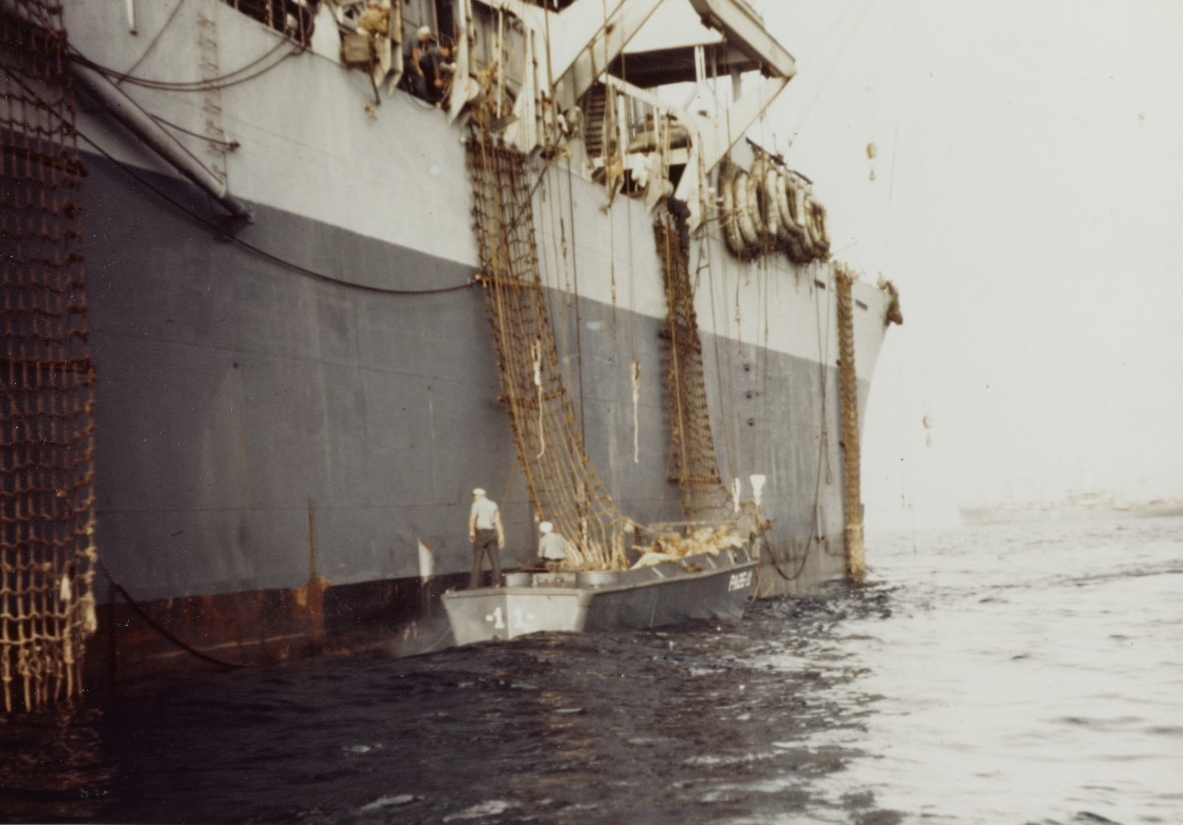