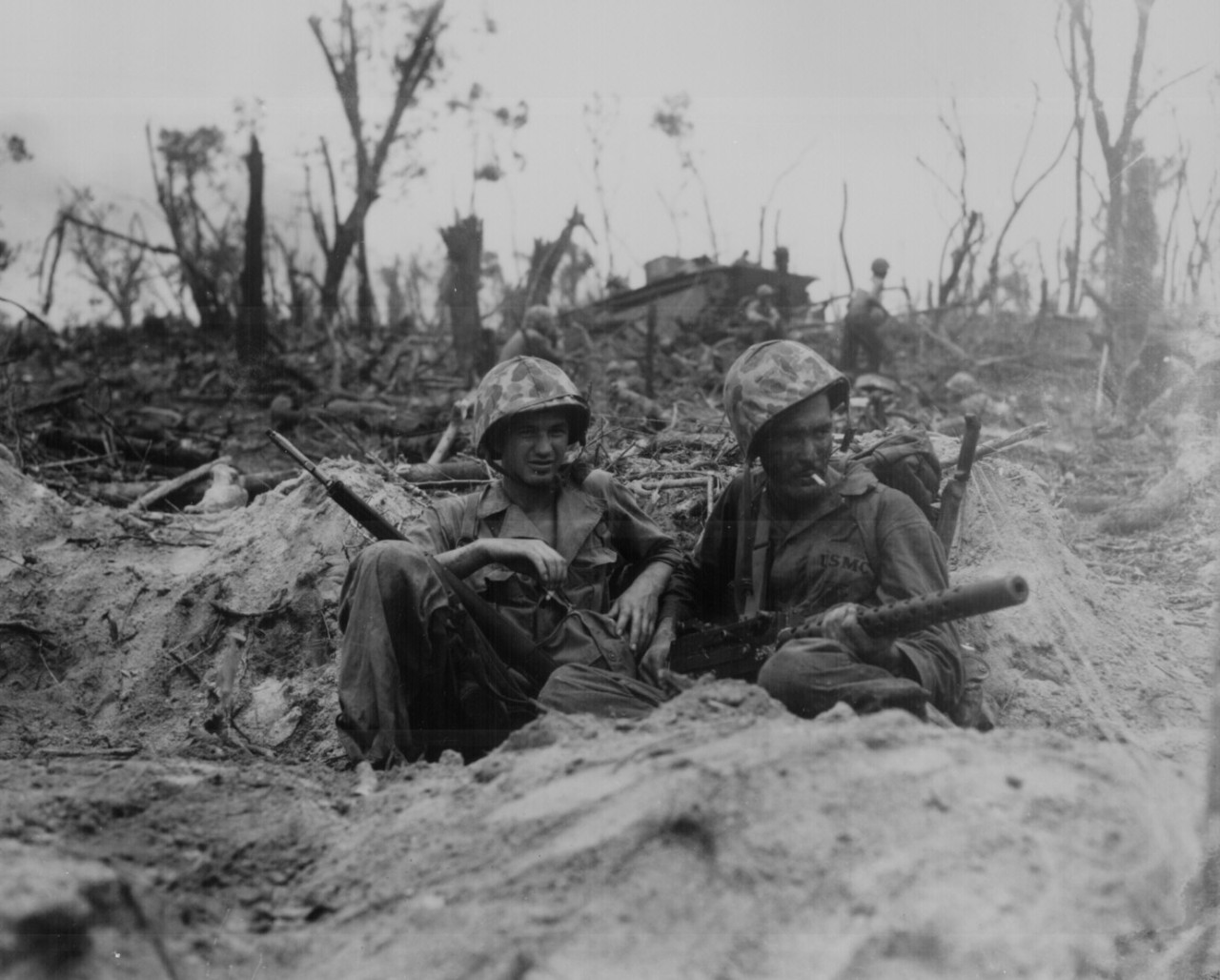 Reflecting years later on his baptism into combat on Peleliu, former Marine Eugene Sledge recalled the odd details that stood out to him in the tense hours before wading ashore. The gunnery sergeant monopolizing use of one of the scarce shipboard heads (toilets), the steak-and-eggs breakfast that seemed to lose its flavor when a man’s stomach was “tied in knots,” and perhaps most vividly the repeated offer of cigarettes from one of his comrades, Merriell “Snafu” Shelton. Sledge, a devout Christian, refused, but his buddy assured him “before this day is over, you’ll be smokin’ the hell outa every cigarette you can get your hands on.” What came next remained burned into his mind for the rest of his life. “Everything that my life had been before and has been after pales in the light of that awesome moment” when he joined with fellow Marines of the 1st Marine Division to storm the beaches of Peleliu on 15 September 1944. The battle that followed was supposed to be a short, relatively easy campaign to protect General Douglas MacArthur’s flanks during his drive toward the Philippines and give the United States access to a vital airfield. Instead, it became a long, bloody scrape against dogged Japanese defenders for an island that many observers and historians—then and ever since—regard as having doubtful strategic value. Whatever limited gains the fighting might have given U.S. forces, the island became a place of legend for the heroism displayed there. As for Sledge, the experience of charging ashore under heavy enemy fire changed him in unanticipated ways—within minutes of reaching the beach, he was begging Snafu for a cigarette.1

Situated north of present-day Indonesia, the Palau Islands seemed to pose a serious risk to American plans to retake the Philippines, which lay about 500 miles to the east. Despite this distance, American leaders feared the Japanese airbase at Peleliu was near enough to pose a threat to General Douglas MacArthur’s landing forces. There was far from universal consensus on this, however, with no less than Admiral William Halsey arguing that the Japanese forces in the Palau chain were well contained and the islands should be bypassed. His arguments failed to carry the day, and plans moved forward to seize the southernmost of the Palaus: Peleliu.2

By the fall of 1944, America’s staggering materiel and manpower advantages over Japan were plainly evident, and thus the Peleliu landings—while a “minor” operation relative to the overall war effort—enjoyed an abundance of firepower. The invasion force consisted of “some 868 ships, 129 in the assault element.”

Submarine chasers guided the fleet, destroyers guarded it, sweepers cleared mines in its path. Behind these came a great flock of command, survey, repair and hospital ships, anti-submarine net-layers, oilers, salvage vessels, tugs, floating dry docks, a dredger, PT-boats, a floating derrick, LSTs, DUKWs, LSDs, cargo ships and 770 small landing craft...such was the scale on which the United States launched even a modest Pacific amphibious landing in the autumn of 1944.3

In addition to safeguarding and delivering the invasion force, the U.S. Navy did its part by laying three days of continuous fire on the island preparatory to the landings. Between the big guns of the Navy’s fleet just offshore and repeated aerial bombardment, the Japanese airport was reduced to rubble, along with most of the surface of the island. The devastation wrought by naval fire gave false hope to those new to combat that the capture of the island would be short and unchallenging. Sledge recalled even his own division commander assuring them the operation would take, at most, four days.4

Such optimism was badly misplaced, an outgrowth of the lack of good intelligence about the island itself. Although it is only a little over five square miles, Peleliu is marked by dense forests and extensive cave formations, making it an ideal location for an extended defense. A series of ridges stretched across the western side of the island, the Umurbrogol, would prove particularly nightmarish for Marines tasked with clearing them.  The island had been home to mining operations before the war, adding deep tunnels to the existing cave structure, which the Japanese used to set up headquarters and bunkers far enough underground and on reverse slopes to nullify the naval bombardment. Ridges overlooking the beach enabled defenders to rain shot and shell on the amphibious American forces, and the landings soon became a hellish nightmare of thick smoke, pockmarked beaches, and relentless fire. One Marine recalled seeing one of the Navy’s fighter planes making its final sweep across the island even as his LST approached the shoreline, only to burst into flames and crash on the beach in front of them, an ominous warning of what was to come. Another medical corpsman saw one of his friends die within seconds of disembarking, his head almost completely shot off by an invisible gunman. Marines scrambled out of their landing vehicles and raced to take cover in shell holes, which were available in abundance. From there, they began the torturous journey up the beach and into the teeth of enemy fire.5

Over 200 Americans died on that first day. Even when they were established, the fighting was far from over. The Japanese attempted a frontal assault using the limited supply of tanks that survived the bombardment, but this was dispatched with relative ease. The American edge in firepower was enough that open engagement was a suicidal option for the Japanese left on the island, and instead they resorted to defensive measures from their bunkers, determined to inflict as many casualties as possible while fighting to the last man. As evidenced by the pre-invasion bombardment, air support and Navy guns were little help against the deeply entrenched Japanese forces. Instead, the Marines—and reinforcements from the Army’s 81st Infantry Division—set about the ugly work of using flamethrowers and grenades to root out stubborn enemy fighters. In the midst of it all, 115-degree temperatures and Pacific monsoons made life miserable. Strict rationing of food and, worst of all, of water supplies added to the woes of the U.S. ground forces. Commanders attempted to reassure the Americans enduring these conditions that “the Japanese [soldier] is no better able to go without food than are,” and furthermore “[he] gets just as wet when it rains and he suffers as much or more from the tropical ills.” This gave them very little consolation.6

By the end of the second day, Sledge’s K Company, 3rd Battalion, 5th Marines had been reduced from 235 men to 78, the survivors either dead or wounded badly enough to remove them from combat. At night, troops slept warily in their holes, for specially designated Japanese attackers crept behind American lines at night to target men in their sleep. Most foxholes consisted of two soldiers who would take turns sleeping, one perpetually on lookout. Some Japanese commandos would attempt to roll live grenades into holes, but most preferred to pounce on sleeping men and engage in hand-to-hand combat. Everyone’s nerves were set on edge once darkness set in, and the threat of friendly fire was an ever-present danger. Sledge came within a second of killing one of his closest friends who crept up to his foxhole one night to ask for water, and he recorded at least one other Marine who was killed by a comrade in the darkness. In another instance, a Marine came under fire from his comrades who could not hear him shouting the password, and he saved himself by loudly singing the Marine Corps hymn instead.7

With the waters around the Palaus securely in the hands of the U.S. Navy, no Japanese reinforcement of Peleliu was possible. Final American victory was inevitable, but it came at a high cost. Despite the promise of completely securing the island in under four days, it took over a week to take possession of the airfield, and another month before Peleliu was truly in American hands. In the process, nearly 2,000 Americans died and over 5,000 were wounded. Of the roughly 11,000 Japanese on the island, virtually every single one perished.8 The consensus among historians is that the campaign was of negligible strategic value, and certainly not worth the cost; indeed, several Marines later derisively referred to Peleliu as “Nothing Atoll” to sum up the value of the island that had cost so many of their comrades’ lives.9  Nevertheless, the Marines gained experience in securing the island that was put to good use later on Iwo Jima and Okinawa. Apart from lessons learned, Peleliu will forever have a place in history for the heroism and grit displayed there.