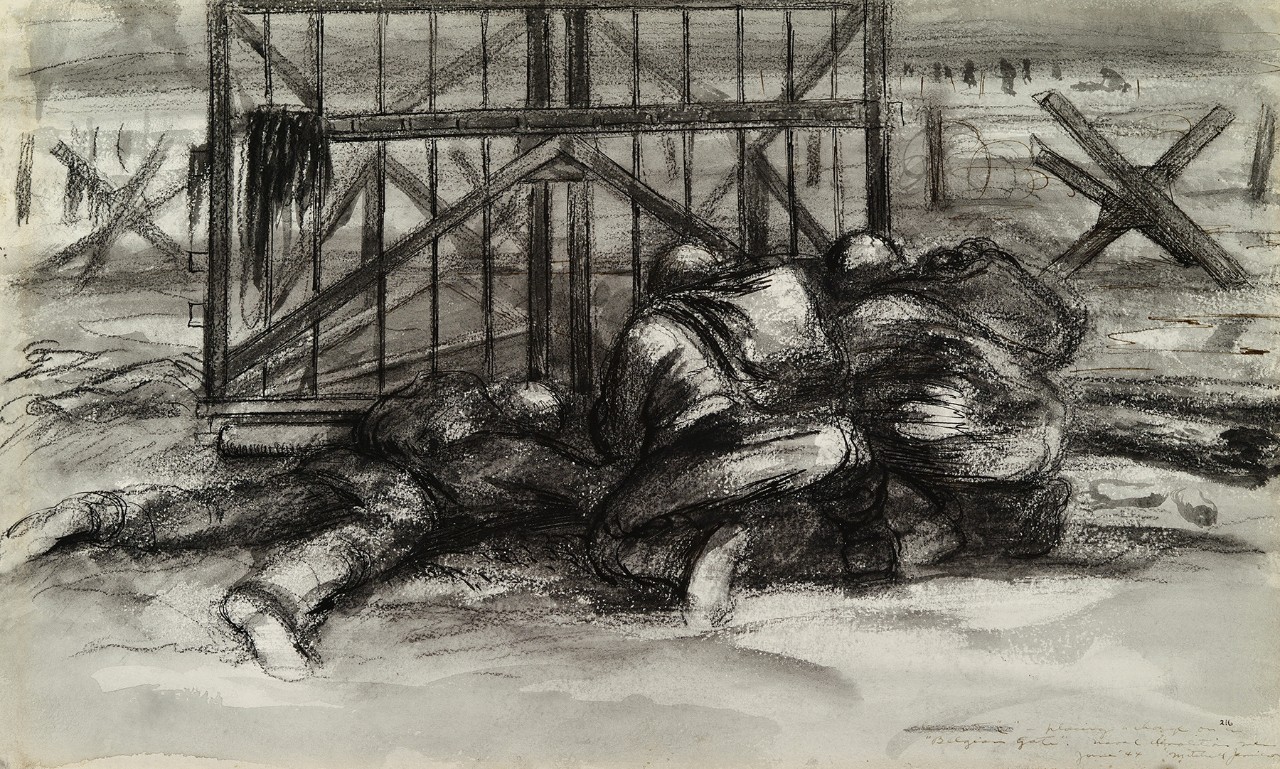 “Omaha Beach—there’s a name that will live, like Tarawa and Guadalcanal, as long as men prize valor and feel for suffering.”1

Operation Neptune, the naval component of Operation Overlord, began in the early hours of 6 June 1944, off a stretch of France’s northern coast now synonymous with the sacrifice of Allied servicemen. The U.S. Navy played a vital role in spearheading the assault on Hitler’s Festung Europa (Fortress Europe), serving in a variety of important roles before, during, and after the landings.2 Her ships began one of history’s most famous days by bombarding German forces on or near the American invasion beaches code-named Omaha and Utah. A newly created Navy demolition team removed obstacles alongside Army engineers early in the invasion, suffering high numbers of casualties in the process. At a critical moment in the battle, several destroyers steamed as close to shore as possible to fire point-blank on German positions. Their bravery allowed the pinned-down GIs to move forward, engage, and destroy the enemy.

The Allied invasion fleet consisted of thousands of warships, landing craft, and merchant vessels under the command of Admiral Sir Bertram H. Ramsay, RN. Divided into a Western (American) Task Force and an Eastern (British) Task Force, the beaches earmarked for invasion included five beaches designated Sword, Gold, Juno, Omaha, and Utah. Under the direction of Admiral Ernest J. King, a task force had been formed to control operations and the training for the cross-channel assault. Under the command of Rear Admiral Alan G. Kirk, Task Force 122 (Western Task Force) formed and continued developing plans for the naval part of the operation. The U.S. warships, alongside some British and French vessels, were designated either Force “O” for Omaha Beach, or Force “U” for Utah Beach.3

The numerous Allied ships arrayed in the English Channel steamed to the severely congested rendezvous point, Area Zebra, or “Picadilly Circus,” for the final drive in to the beaches. This astonishing force included 284 warships, including five battleships, 23 cruisers, and scores of destroyers and destroyer escorts. Those onboard the ships could hear, if they could not see, hundreds of airplanes filled with well-trained paratroopers from the 82nd and 101st Airborne Divisions as well as the British 6th Airborne Division. Destined to be scattered far from their assigned drop zones, the paratroop misdrops actually helped sow confusion in the German high command, convincing many that a much larger force had jumped into France.4

Opening the invasion, a naval bombardment within the American sectors was expected to coincide with the arrival of Eighth Air Force bombers. Allied planners wanted to preserve the element of surprise, allotting the U.S. Navy only an hour to bombard the assigned beaches. Fearing that a longer pre-invasion strike would allow the Germans time to assemble forces and counterattack, the agreed-upon bombardments went ahead as planned, but were ultimately doomed to failure. Battleships Arkansas (BB-33) and Texas (BB-35) shelled Omaha Beach, alongside two French cruisers, Montcalm and Georges Leygues, firing in the hope of liberating their homeland. Nevada (BB-36) struck positions at Utah Beach, firing 337 rounds of 14-inch shells and nearly 2,700 rounds from her 5-inch guns. The GIs in the tiny Higgins boats heading to shore watched in awe as the shells flew over their heads at the enemy positions.5 Despite the Navy’s remarkable firepower, German forces did not suffer significant casualties during the bombardment. As the assaulting infantry divisions sadly discovered, most of the Navy and Army Air Forces’ ordnance landed well behind enemy fortifications and troop positions.6

A contingent of Naval Combat Demolition Units (NCDUs) had arrived in England in late 1943, after undergoing arduous training at Fort Pierce, Florida. The first NCDU class began training, oddly enough, on 6 June 1943. By May 1944, 32 NCDU teams were in Britain or Scotland conducting training with their Army engineer counterparts. Six sailors made up an NCDU team, one officer and five enlisted men (the exact number that could fit into one of the Navy’s rubber boats). All sailors volunteering for NCDU underwent the infamous “Hell Week,” a staple of Underwater Demolition Training (UDT) still in existence in Basic Underwater Demolition/SEAL (BUD/S) school today. Devised by Lieutenant Commander Draper L. Kauffman, the founder of the Bomb Disposal School, the tough training was designed to weed out individuals who did not possess the physical or mental stamina needed to perform the most difficult of missions. Kauffman himself took the training alongside officers and enlisted men. The closeness with which the officers and enlisted worked together in the teams was almost unheard of in Navy history.7

The NCDUs were combined with U.S. Army engineers into groups known as gap assault teams (GATs), made up of six NCDU sailors, 27 soldiers, and three additional sailors. The combat demolition units’ dangerous assignment involved detonating mines and clearing obstacles at the waterline and on the landing beaches. At Omaha Beach, 16 teams were to clear 16 gaps of approximately 50 yards each. The GATs began their assault at H-hour + 3 minutes (0633). Everything that could go wrong quickly went wrong on Omaha, as the assault force entered a veritable hell of pre-sighted artillery, intersecting machine-gun fire, and obstacles topped with plate-like Teller anti-tank mines. With smoke obscuring the landmarks coxswains used to bring their landing craft to their assigned zone, troops were brought in far off course, mixing units and leading to mass confusion. The heavy enemy fire caused soldiers to bunch up and scramble for any available cover, often behind the obstacles the NCDU teams were attempting to detonate. The quickly rising tide also worked against the assault units, rising one foot every ten minutes.8

NCDU 23, also known as “Vetter’s Vandals,” was wiped out when a German shell struck their rubber boat, which was filled with 300 pounds of explosives. Among the obstacles encountered on the beaches were wooden poles resembling telegraph poles, most of which had Teller mines affixed to them. Another type of obstacle were the tetrahedrons, consisting of three steel beams welded together, looking like an enormous toy jack. The Belgian Gates, or “Element C,” were obstacles standing nearly six feet high and thick enough to stop and smash a landing craft. Despite the volume of fire, the gap assault teams on Omaha managed to clear five of the 16 gaps assigned them. Not until D + 2 would all gaps on Omaha Beach finally be cleared. The casualty rate for the NCDU units on Omaha Beach alone was around 70 percent. At Omaha, 31 NCDU servicemembers were killed in action and 60 wounded, while at Utah Beach, 6 were killed and 11 wounded, showing the incongruity of German defenses at the two American-assigned invasion zones.9

The success of the invasion seemed most dubious at Omaha Beach, where the American GIs remained pinned down, unable to move forward onto the bluffs from where German troops poured murderous fire. Successive waves of infantrymen attempting to come ashore only added to the chaotic situation. “What saved the day for the Allies was a handful of British and American destroyers,” as historian Craig Symonds asserts.10 Officially, the destroyers were only to screen the invasion fleet from U-boats and the smaller, faster E-boats. Yet, with the crisis on Omaha reaching a critical point, they were ordered to provide close-in fire support for the troops stuck on the beach. Rear Admiral Carleton F. Bryant, who commanded the naval gunfire support groups, radioed a message from his battle station onboard Texas to the nearby destroyers: “Get on them, men! Get on them! They are raising hell with the men on the beach, and we can’t have any more of that. We must stop it.”11

Among the first Allied ships lost during the invasion, destroyer Corry (DD-463) took heavy fire from enemy shore batteries even before H-hour began at 0630. While originally believed sunk by a shot striking her amidships, Corry hit a mine and broke in two. After her forward engine room, forward fire room, and aft fire room flooded, the order to abandon ship came at 0641. She went to the bottom in less than 30 minutes, taking 24 men with her.12

Under orders not to fire more than half the ammunition they carried in case it was needed for an emergency situation, the destroyer captains decided unanimously that chaotic Omaha Beach was such a situation. Beginning around 0800, destroyers such as Emmons (DD-457), Carmick (DD-493), McCook (DD-496), Doyle (DD-494), Baldwin (DD-624), Harding (DD-625), Frankford (DD-497), and Thompson (DD-627) began engaging German positions.13 With smoke still obscuring the enemy guns, the gunners onboard the “tin cans” searched for “targets of opportunity.” Carmick arrived off Normandy with 1,500 shells for her 5-inch guns and in less than an hour, fired 1,127 of them. Her gun barrels, smoking red hot, had to be hosed down in order to keep them firing. Finally, at around noon, the destroyers established contact with spotters ashore.14

Two of the U.S. destroyers, Satterlee (DD-626) and Thompson (DD-627), supported over 200 men of the Army’s 2nd Ranger Battalion scaling the cliffs at Pointe du Hoc. The Rangers’ mission involved destroying several heavy guns the enemy could use against the landing forces at both beaches. Joined later by Ellyson (DD-454), the three destroyers provided indirect fire on German positions atop the cliffs, enabling the Rangers to reach the top—only to find the Germans had replaced the guns with wooden dummies, moving the actual ones further inland.15

For over 90 minutes, U.S. destroyers pounded the enemy gun positions. Some of the ships were so close in to shore that they received German rifle and machine-gun bullets to their hulls and superstructures. Still, the LSTs (landing ship, tank) and LCIs (landing craft, infantry), were able to steer into the beach to unload their cargo, even if haphazardly launching men and machines into deep water. The Allies put nearly 132,500 men ashore on D-Day. After the beachheads were firmly established, the “primary naval responsibility [was] the landing of men and supplies.”16

The successful invasion of northern France on D-Day became one of the major events in U.S. naval history. Some 11 weeks later, Allied troops advancing from Normandy and Brittany liberated Paris, almost two months ahead of schedule. Rear Admiral Kirk, reflecting on the day, stated, “Our greatest asset was the resourcefulness of the American sailor.” From those manning the shipboard guns, to the coxswains conning the LCIs, on down to the “naked warriors” of NCDU teams, every man performed his job faithfully. The destroyermen received accolades from many high-ranking officers within the Allied command, for coming to the aid of their comrades just as the situation appeared at its direst. Major General Leonard T. Gerow, establishing his V Corps headquarters on Omaha Beach, summed up the sentiment in a message to General Omar N. Bradley, Commander, U.S. First Army, then on board heavy cruiser Augusta (CA-31): “Thank God for the United States Navy!”17

2 The idea of a Festung Europa, as the Germans called it, involved the construction of a massive array of defensive artillery positions, strongpoints, and concrete fortifications along the Atlantic coast.

5 Designed and built by Andrew Jackson Higgins, each of these small landing boats could carry 36 soldiers at a time.