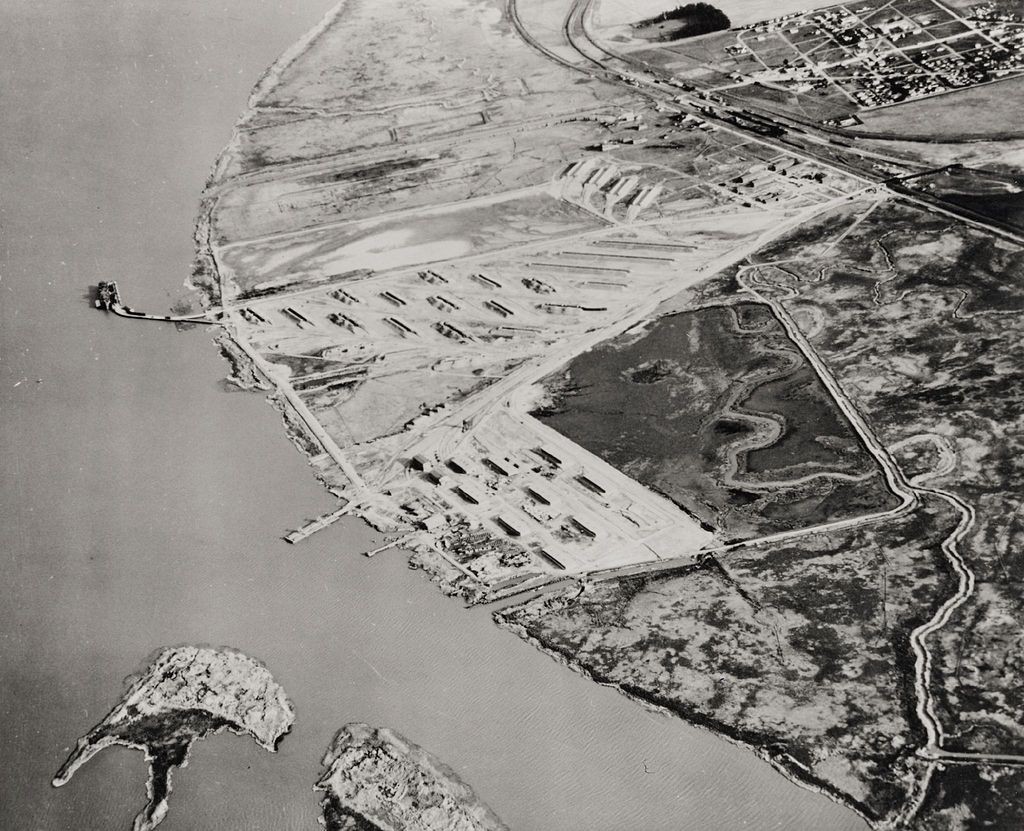 Eastward-looking aerial photograph of Port Chicago Naval Magazine, early 1944. The town of Port Chicago is visible in the upper right. At lower left, the utility and personnel piers extend toward the two sections of Seal Island. The munitions loading pier curves to the left beyond the revetments, between which railcars loaded with munitions were shunted. The munitions pier is separated from the barracks buildings near the personnel pier and near the town by marshy tidal zones (U.S. Navy/National Park Service).

Planning for the naval magazine and naval barracks at Port Chicago, California, began shortly after the 7 December 1941 attack on Pearl Harbor, when the Navy assessed that the Mare Island Naval Weapons Station would soon reach the limits of its capacity. The new facility’s location near the small town of Port Chicago, on Suisun Bay, at the confluence of the Sacramento and San Joaquin rivers to the northeast of San Francisco Bay, appeared ideal for munitions transfer and loading. Construction began in February 1942 and continued throughout the balance of the year. As an adequate number of commercial stevedores was not available, Navy personnel were to carry out the loading duties. The command was commissioned on 30 November 1942 as an annex of the Mare Island facility; on 8 December, the first ship was loaded at the magazine’s munitions pier.

Reflective of the Navy’s personnel policies at the time, which barred African American Sailors from nearly all seagoing branches, most of the Navy ordnance battalions—the stevedores performing hard physical labor of loading—assigned to Port Chicago Naval Magazine and similar facilities were comprised of African American enlisted personnel and white officers. Many of the latter were older reservists recalled to active duty or junior officers with wartime commissions who had had little or no training in handling munitions and minimal leadership experience, particularly in racially segregated commands. The purview of the African American petty officers and chiefs was limited, and inexperience and inadequate training further handicapped them. Assignment of the Sailors to the ordnance battalions was based on results of the standard Navy classification test in use at the time. This was skewed against those recruits who had had little access to formal education—mostly African Americans. In addition to the naval service’s segregation policy, the relative geographic isolation of the base, triple-shift operations, often-hazardous working conditions, lack of recreational facilities, and the unending tedium of the duty rotation contributed to discontent, low morale, and disciplinary issues. The chain of command focused primarily on maintaining a high operations tempo with periodically increased loading quotas.

On the evening of 17 July 1944, disaster struck. Two cargo ships, SS Quinault Victory and SS E. A. Bryan, were berthed at the munitions pier, the latter vessel being loaded with a variety of munitions. In the holds of E. A. Bryan or on the pier ready to be loaded were 4,606 tons of antiaircraft ammunition, aerial bombs, high explosives, and smokeless powder. Another 429 tons were still in 16 railcars on the pier, awaiting transfer to both ships. According to witness statements, at 2218 (10:18 PM) a dull clang (possibly caused by a falling cargo boom) and a sound of splintering wood preceded a blinding flash and heavy detonation on the pier, followed within seconds by smaller detonations and then the massive explosion of munitions in E. A. Bryan’s holds. The ship, most of the pier, all structures within a 1,000-foot radius, and many of the flatcars disintegrated. The explosion blew Quinault Victory into large pieces that sank in the waters of Suisun Bay. A Coast Guard fire barge was blown away from the munitions pier and sank, taking its 5-man crew with it. The 320 individuals in the immediate proximity of the blasts— Navy personnel on the loading details, a Marine Corps sentry, the ships’ Navy Armed Guard and merchant mariner crews, and civilian employees—were killed instantly. Of these, the remains of only 51 were identifiable afterward. African American Sailors comprised nearly two thirds of those killed. More than 250 other personnel at the Port Chicago facility were injured, a number seriously. Most of the buildings on base, many of light frame construction, were damaged; the rest were destroyed. Secondary fires raged and munitions continued to cook off for some time after the explosion of E. A. Bryan. Smoke billowed over two miles into the sky, and the shock of the detonations caused structural damage and broke windows in surrounding communities, was felt 40 miles to the southwest in San Francisco, and registered as far away as Nevada. A number of privately owned vessels and small boats underway in Suisun Bay were damaged by falling debris. 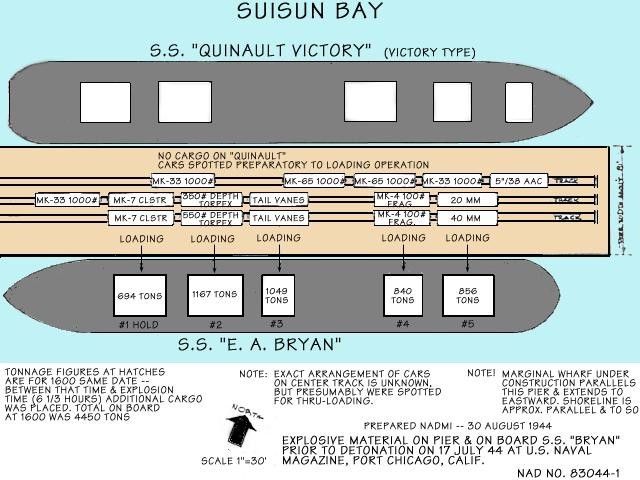 Diagram from the Port Chicago  board of inquiry's report showing the facility's munitions pier at the time of the disaster. Clearly delineated are the two cargo ships, E. A. Bryan and Quinault Victory, the three lines of railcars, and the placement and quantities of various types of munitions (antiaircraft ammunition of various calibers, several types of aerial bombs, high explosive for underwater munitions) (U.S. Navy).

A Navy court of inquiry convened on 21 July and carried on its investigation for 39 days. The court’s primary focus was on the training and operational practices carried out prior to the blasts. Thus, it was solely in this context that the personal and professional challenges encountered by personnel in the isolated, racially segregated command were examined. However, the court’s report strongly implied that specific attributes—essentially the common racist stereotypes of the era—of the African American enlisted personnel had slowed training evolutions and day-to-day operations, and made them more difficult. The report raised no questions concerning the white officers' leadership responsibilities.

Nevertheless, in the court’s opinion, the explosions and resultant loss of life and damage were not due in any way to negligence or inefficiency—in fact, the conduct and emergency response efforts of enlisted and officer personnel immediately after the event were considered exemplary. Although the exact cause of the initial detonation could not be identified due to lack of immediate eye witnesses and the extensive destruction of the munitions pier area, a number of operational shortcomings were identified that could have contributed to the disaster. Broadly summed up, these were:

Most of the court’s recommendations, which essentially addressed these operations-related findings, would be implemented at naval ordnance facilities before the end of the war—including at the rebuilt Port Chicago Naval Magazine.

While the court of inquiry was still pursuing its investigation, events that occurred less than a month after the Port Chicago explosions kept the tragedy in the public eye. They also imbued the event with notoriety and controversy, and would ultimately remain unresolved until the end of the 20th century.

Soon after the disaster, surviving ordnance battalion personnel were transferred from Port Chicago to Mare Island Naval Weapons Station. There, the Sailors were again assigned to ordnance-loading duties, under similar conditions they had encountered at Port Chicago. Still severely shaken by their experiences, the men approached their tasks with a high degree of uneasiness. On 9 August, 328 ordnance battalion Sailors refused to carry out their duties unless safety conditions were improved. Following appeals by their officers, 70 men agreed to stand down and carry on with their work. On 10 August, Rear Admiral Carleton H. Wright, commander of the Twelfth Naval District, addressed the remaining 258 Sailors, warned them that their actions would be construed as mutiny, and made them aware of the severe consequences of such an action. Ultimately, 50 men—later known as the “Port Chicago 50”—stood their ground.

The 208 men who returned to duty received summary courts-martial for refusal to obey orders and were sentenced to forfeiture of three months' pay. The remaining 50 Sailors were charged with disobedience of a lawful order and mutiny. On 14 September, their general court-martial opened. On 24 October, the court found the men guilty of conspiracy to commit mutiny, and they received sentences ranging from eight to 15 years of confinement and dishonorable discharges. At this point, the court-martial had generated some degree of attention among the public, particularly in the African American community. Future Supreme Court justice Thurgood Marshall, at the time the NAACP chief counsel, had attended many of the court’s sessions and appealed the Sailors’ conviction with the Navy judge advocate general. Although the appeal proved unsuccessful, Marshall’s written communication with Secretary of the Navy James Forrestal prompted the latter to direct that the Navy review the case. The review recommended a retrial, this time disregarding previously allowed hearsay evidence. The court’s board reconvened, but reaffirmed the original sentences. However, pressure from several quarters, including First Lady Eleanor Roosevelt, prompted Forrestal to have the convicted Sailors released from confinement in January 1946. The men were dispersed among various ships deployed in the Pacific, performing menial duties until receiving general discharges under honorable conditions. Into the 1990s, they and their descendants repeatedly appealed to Congress and the Navy to have their names and records cleared. Recognition finally occurred: On 17 July 1994, the Port Chicago Naval Magazine National Memorial was dedicated to those lost in the disaster. Freddie Meeks, at the time thought to be the last-surviving known member of the “Port Chicago 50,” received a Presidential pardon in December 1999. However, complete exoneration of all 50 Sailors has not occurred to date.

Although the Navy initially dealt with the Port Chicago explosion and the subsequent “mutiny” in narrow operational and disciplinary contexts, many facets of both incidents ultimately had broad ramifications for the service. The relative operational inefficiency and, more significantly, the moral cost, of maintaining segregated commands were very clear in the aftermath of the tragedy at Port Chicago and the later events at Mare Island. Moreover, both the court of inquiry’s report and the courts-martial proceedings inadvertently highlighted the fundamental racial inequality in the naval service at the time when the nation was engaged in a global conflict to restore and preserve fundamental freedoms. On 26 July 1948, this untenable contrast between institutional policy and public ideals would finally be ended by President Harry S. Truman’s Executive Order 9981, which paved the way toward desegregation of the U.S. Navy and other armed services.

Bibliography: includes a broad spectrum of published secondary and unpublished archival sources related to the Port Chicago tragedy and its aftermath, and to the service of African Americans in the U.S. Navy and other armed forces branches during World War II 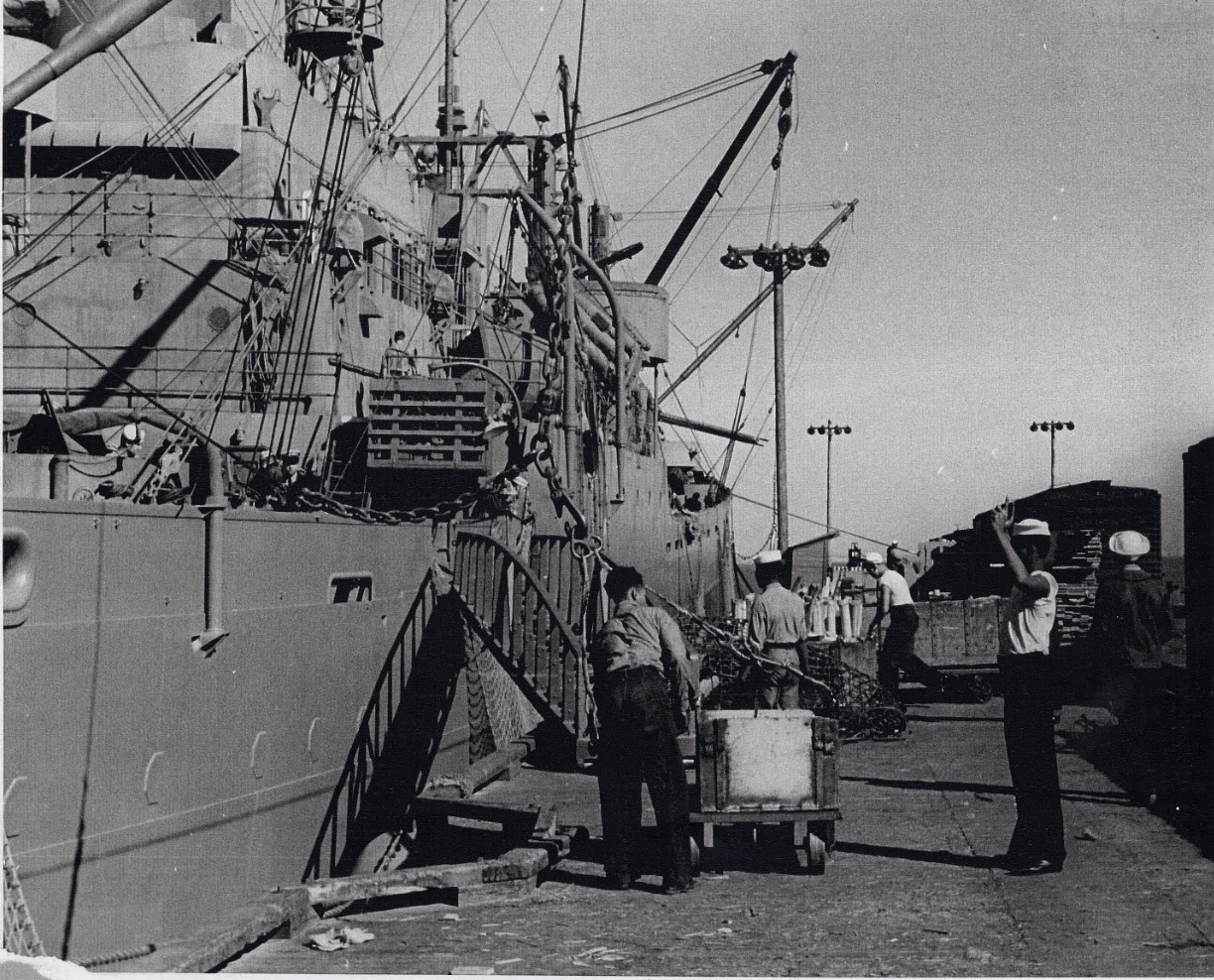 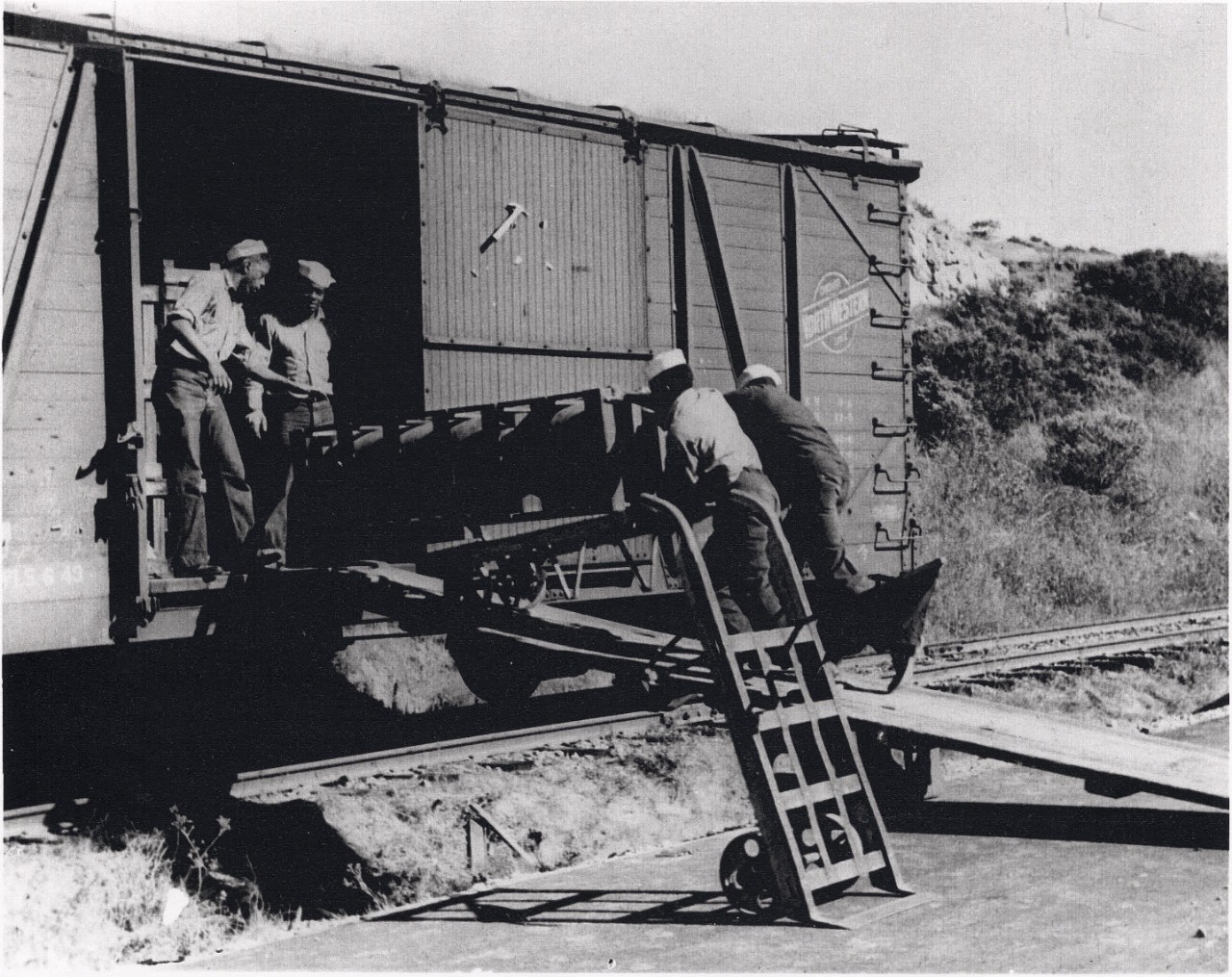 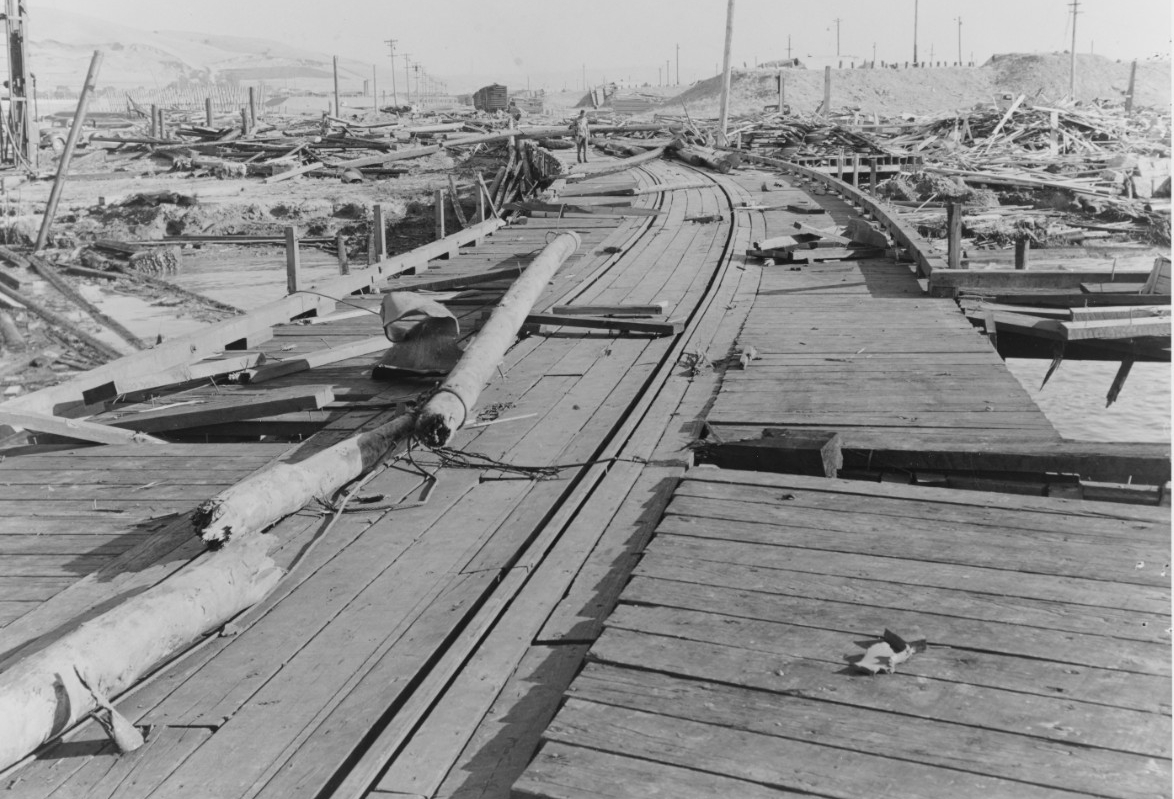 This view looks south from the munitions pier, showing the wreckage of Building A-7 (Joiner Shop) at the right. There is a piece of twisted steel plating just to left of the long pole in left center. Photograph was taken by the Mare Island Navy Yard (NH 96821). 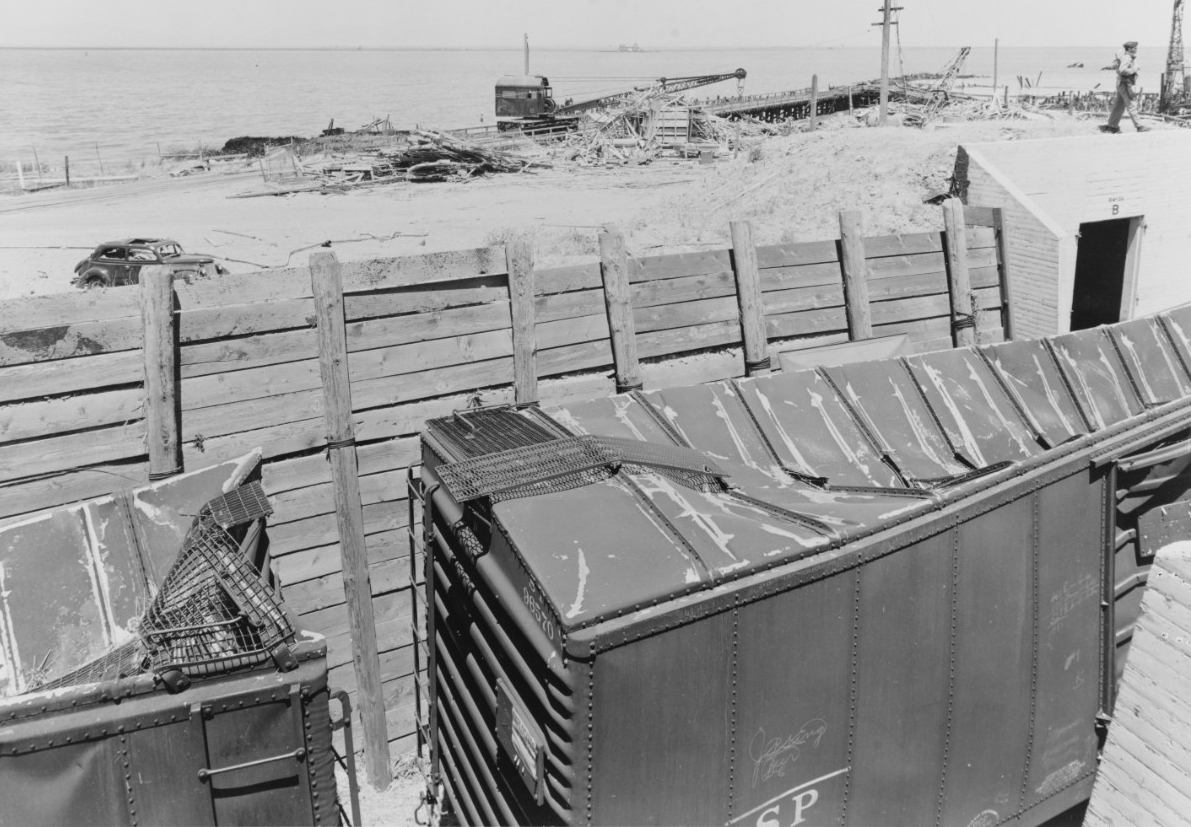 This view looks north from barricade magazine BM-138. The badly munitions pier is in the background with the remains of SS Quinault Victory barely visible off its tip (right distance). Note crushed roofs on Southern Pacific railway cars in the foreground, damaged automobile at left, railway crane in center, Marine sentry at right armed with a Reising .45-caliber submachine gun, and magazine door below the sentry. Photograph was taken by the Mare Island Navy Yard (NH 96822). 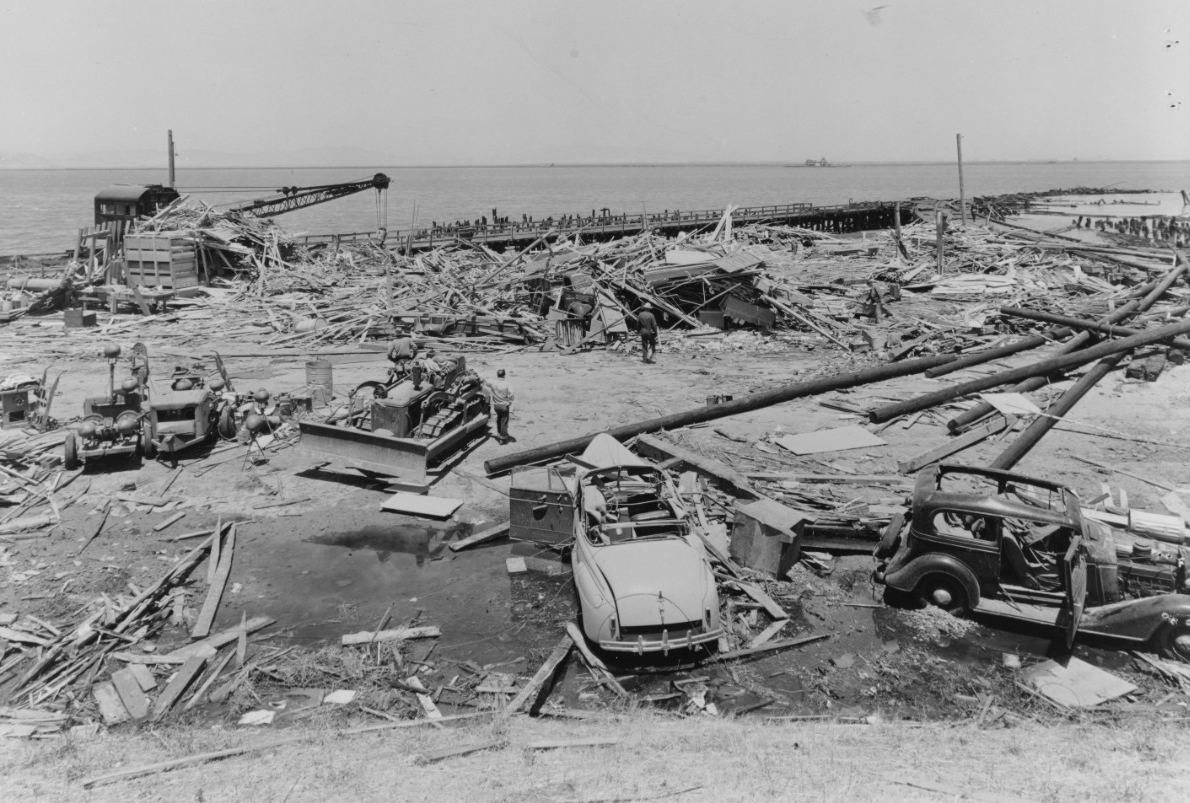 This view of the effects of the 17 July 1944 explosions looks north, showing the wreckage of Building A-7 (Joiner Shop) in the center and munitions pier beyond. Note bulldozer and damaged automobiles in the foreground, railway crane at left, and scattered pilings. Photograph was taken by the Mare Island Navy Yard (NH 96823).