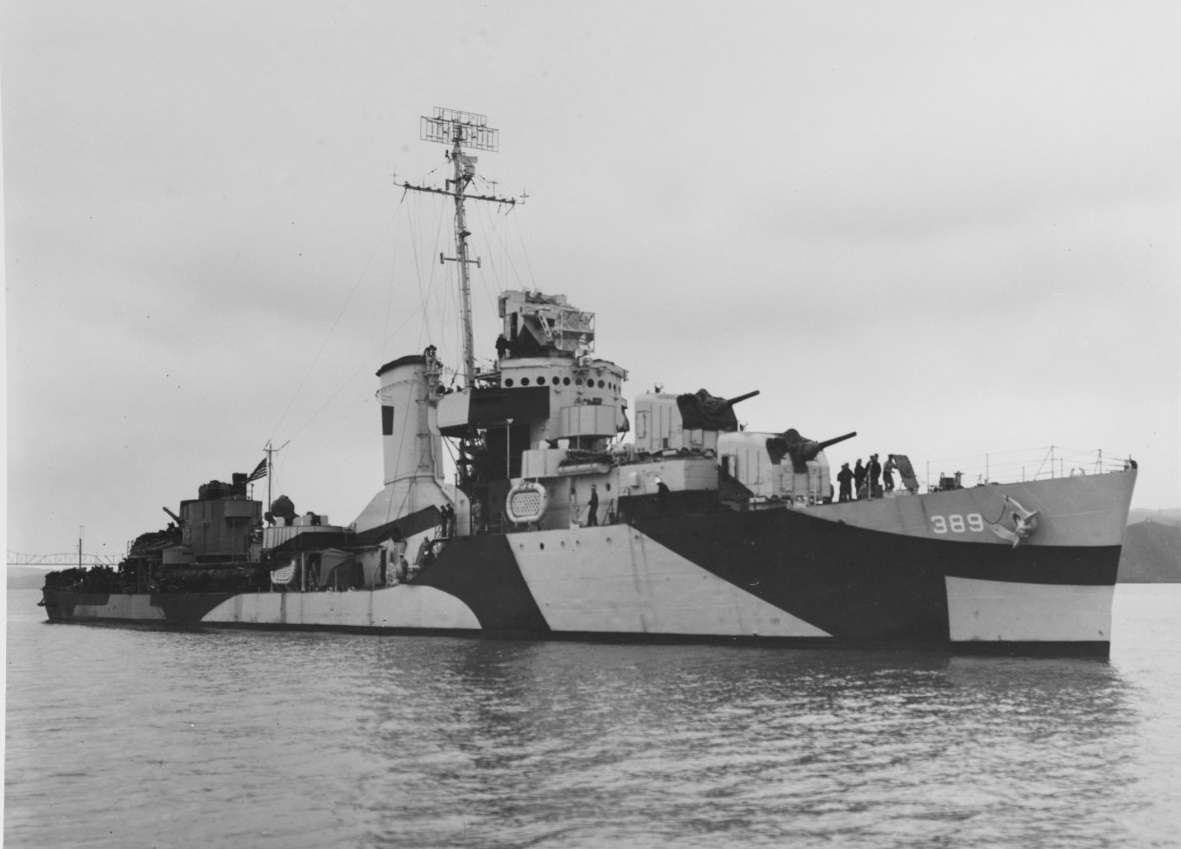 “War should not be glamorized,” wrote Donald W. Lynch long after his service as chief engineer in destroyer Mugford (DD-389) during World War II. He had purposefully put much of his wartime experiences out of his mind, but later, in an undated letter to a Mugford reunion group, he described why that was so.

Lynch joined the Navy after Pearl Harbor and, after four months of intense steam and electrical engineering training at the Naval Academy, received his commission in May 1942. Three months later, he was serving aboard Mugford during the invasion of Guadalcanal in August 1942. As he put it, this was “quite a shock for a Montana farm boy with a Master’s degree in Forestry.”

The war arrived quickly for Mugford and Ensign Lynch, when four Japanese carrier-based bombers (2nd Kokutai) attacked the destroyer on 7 August, scoring three near misses and one hit just forward of the No. 3 gun mount. Four Sailors died, three suffered mortal wounds, and another ten were blown overboard. Lynch tried to help “in the midst of complete confusion…,” the deck “covered in debris, lots of black soot, men lying amidst the clutter, blood, and torn clothing.” He came across a wounded chief boatswain’s mate, who ordered an officer to stop cleaning the blood off his face. “Forget my face,” he said, “Check my leg!” Lynch later wrote he looked at the chief’s leg and thought, “My God, there were only some stringy pieces of skin below the knee, blood-soaked, very dirty, and no sign of ankle or foot.”

Like so many times before and since, confusion and chaos is the stuff of war, particularly but not just for those manning battle stations outside of the CIC. People only make sense of it afterward as time molds and shapes the interpretation of events. Two days after the air attack, Mugford steamed in the warm waters in the Solomon Islands as the Battle of Savo Island took place off in the distance. Lynch wrote, “It was a very dark night, with low clouds, rain, no moon or stars—pitch black! We heard heavy gun firing and saw flashes of explosions on the horizon. There was utter confusion as to where we were, where our allies, if any, were, or where the enemy ships were.”

The following morning, Mugford proceeded to Savo Island to rescue survivors from the cruiser Vincennes (CA-44). “We began pulling bodies and living men aboard the ship. The mid-section of the deck was soon covered in men—mostly half-naked, some with torn clothing, and all in critical condition.  Our doctor, Lieutenant Bruce McCambell, was very busy administering first aid. Blankets were placed on the shivering, suffering men; on others, blankets or sheets simply covered their dead bodies.... We then proceeded to the tender and discharged our pitiful load of dead and wounded men. What more is there to say?”

In November 1944, Mugford, which had spent the long intervening years in combat operations off New Guinea and the central Pacific, ran partially out of luck during operations in the Philippines. While patrolling in Surigao Strait, a Japanese kamikaze dove through intense anti-aircraft fire and crashed into Mugford's port uptakes, wiping out a gun crew and gutting No. 1 fire room. Seven Sailors died instantly and another 14 were wounded. Later, with the fires out and the clean-up begun, the question arose, “Where is Tony?” A firemen third class, Tony was stationed in the fire room and had never come out. Lynch, by then chief engineer, volunteered and searched the pitch-black, still-smoldering smoke-filled room. “With a flashlight I began the search.  Finally, way at the back of the compartment, crouched in a sitting position, with his skin very dark and swollen, was poor dead little Tony.” They later discovered Tony had lied about his age and was only fifteen years old.

Lynch survived the war but never forgot it, carrying the invisible wounds with him always. These scars fade only with difficulty, as is known by anyone who comes home with the stress of war about them.  For Lynch, they never faded, and he ended his letter by writing, “This is about all I’m able to write. Thank God WWII was finally over—and I hope to forget as much of it as possible.”