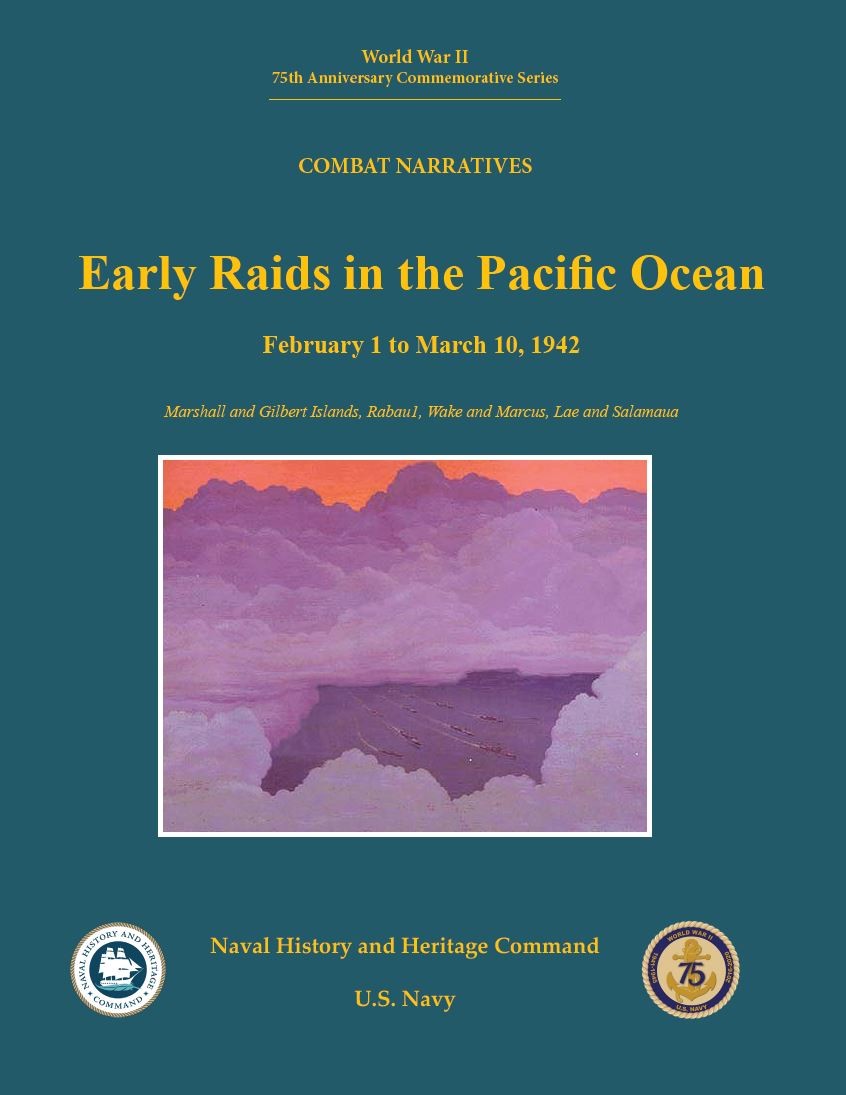 With the U.S. battle fleet still recovering from the damage of the Pearl Harbor attack, it was left to the “supporting” fleet to take the fight to the enemy. Not one battlewagon engaged in any of these early Pacific raids, which were combination carrier attacks and bombardments. Carriers began to show their beyond-the-horizon capabilities and cruisers provided the biggest guns. Through the course of these actions, the United States was on the attack for the first time in the war. While the victories were not momentous and the losses were light, the raids represent the first steps of the rise of the carrier as the new “ship of the line.”

The Office of Naval Intelligence (ONI) disseminated a narrative and evaluation of the early 1942 raids in January 1943. This formerly classified publication is available in the Navy Department Library Online Reading Room. The Naval History and Heritage Command republished the comabt narrative in 2017 in observance of the 75th anniversary of World War II. Click the cover image at right to download the PDF. 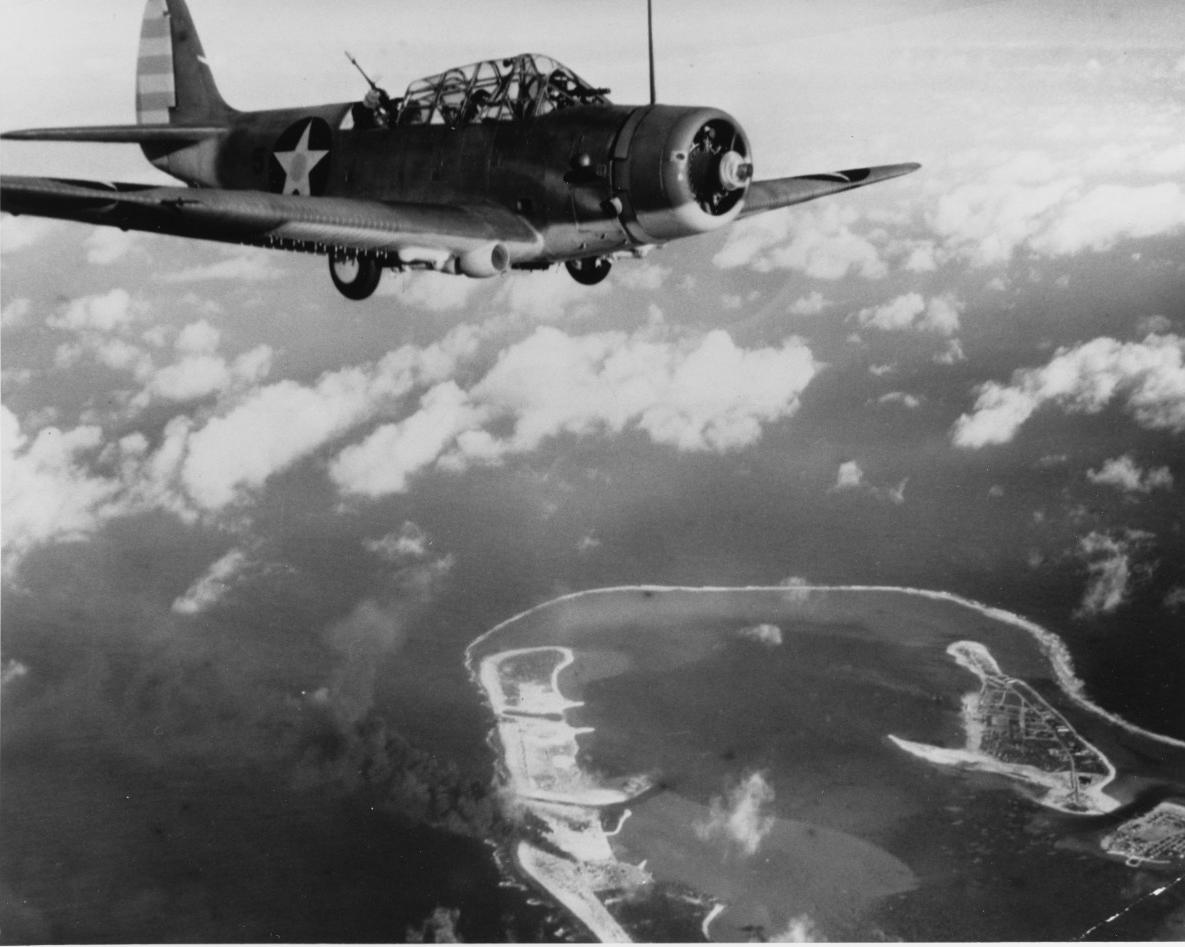 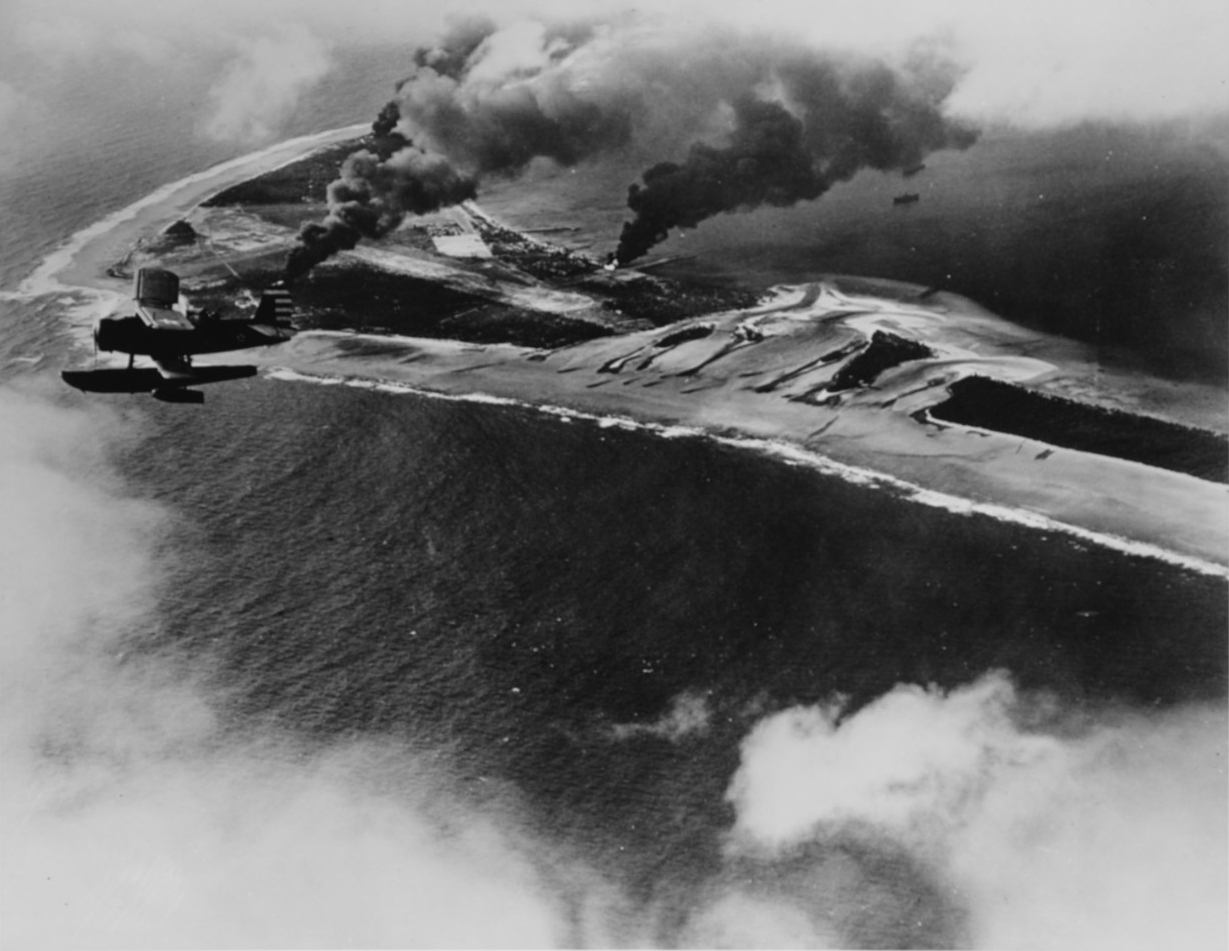 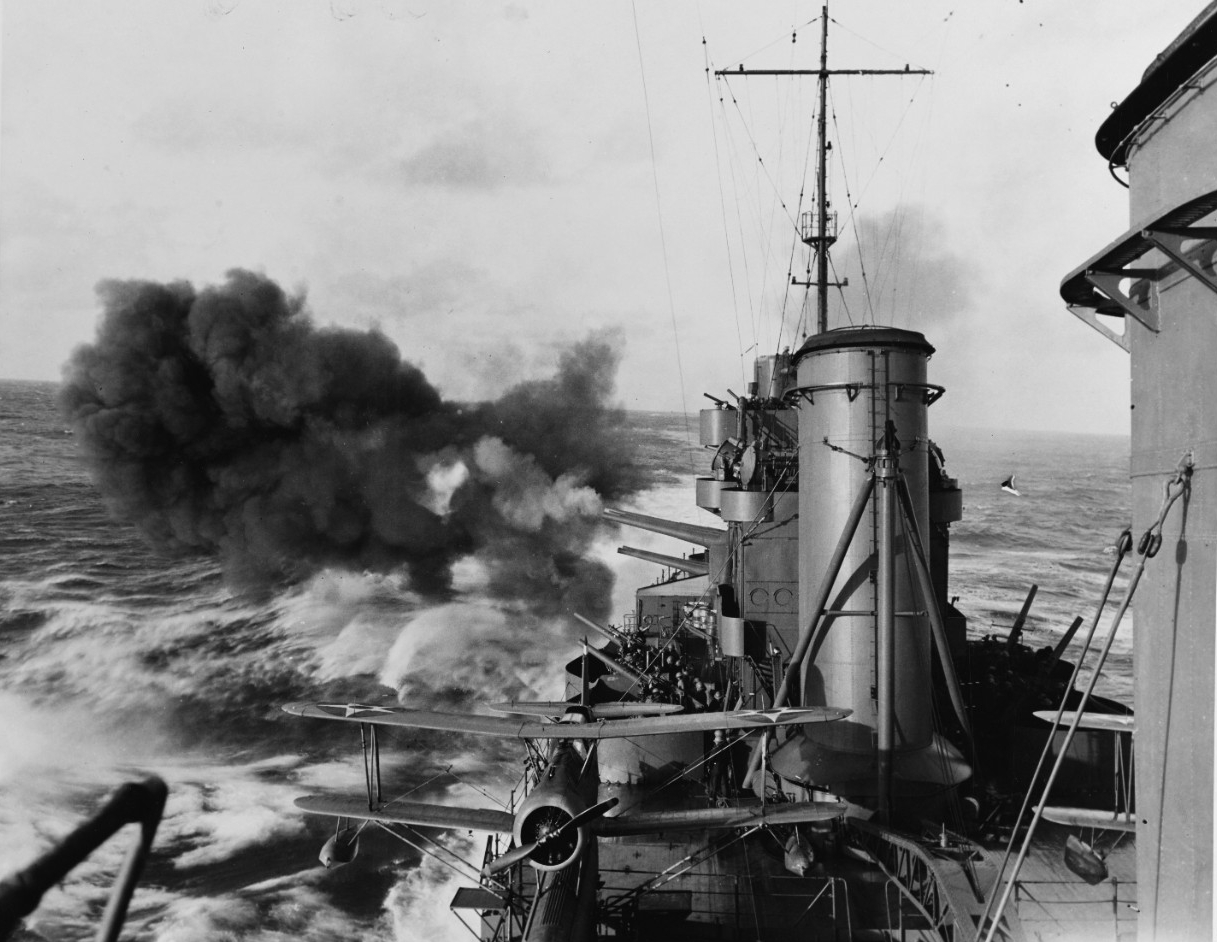 NH 50946. Salt Lake City fires her aft 8-inch/55-caliber guns while bombarding a Japanese-held island in February 1942. This view has long been identified as a scene from the 24 February bombardment of Wake. However, it may have been taken on 1 February, during the bombardment of Wotje. 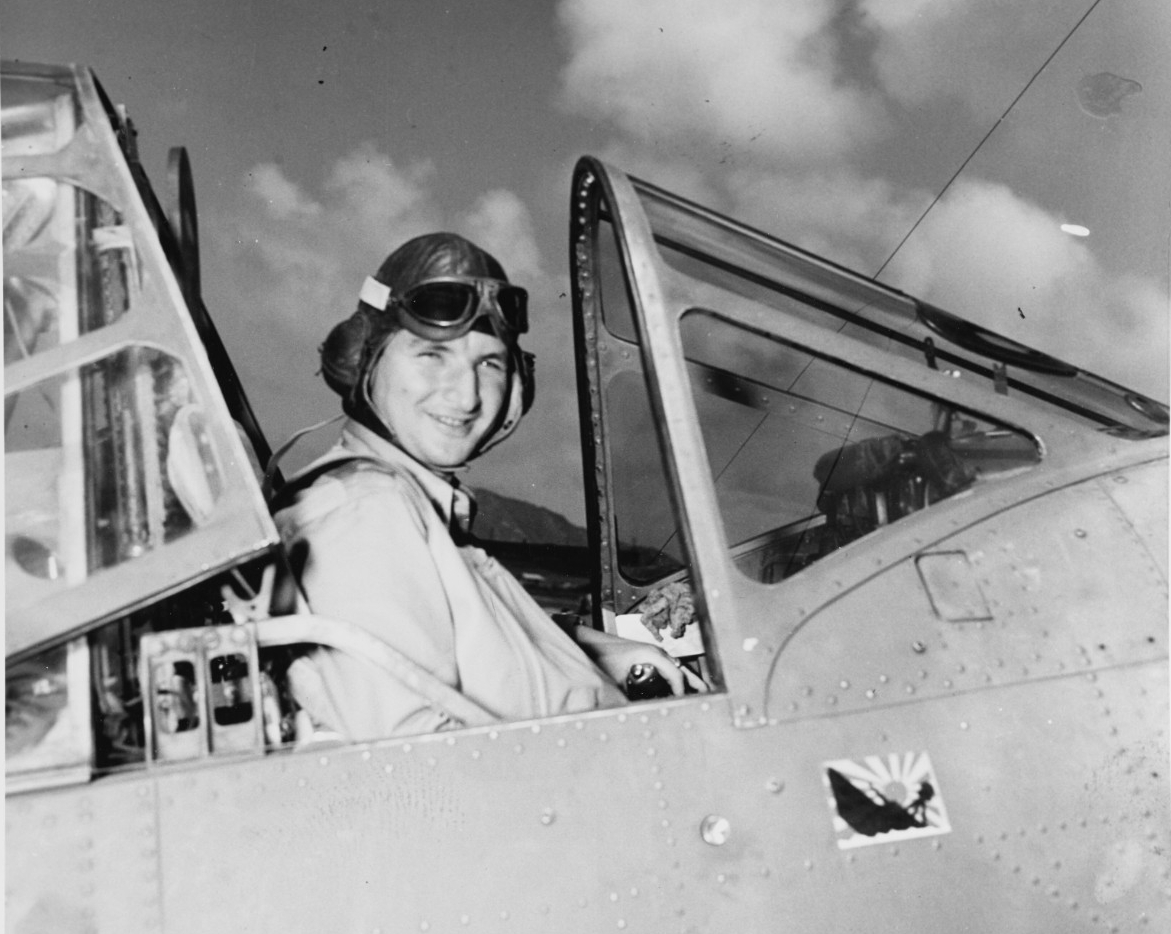 80-G-66074. Lieutenant Commander Lance E. Massey in his Douglas TBD-1 Devastator, May 1942. Note victory marking on his aircraft representing the sinking of a Japanese ship during the 1 February Marshall Islands raid, when he was executive officer of Torpedo Squadron Six (VT-6) on Enterprise. 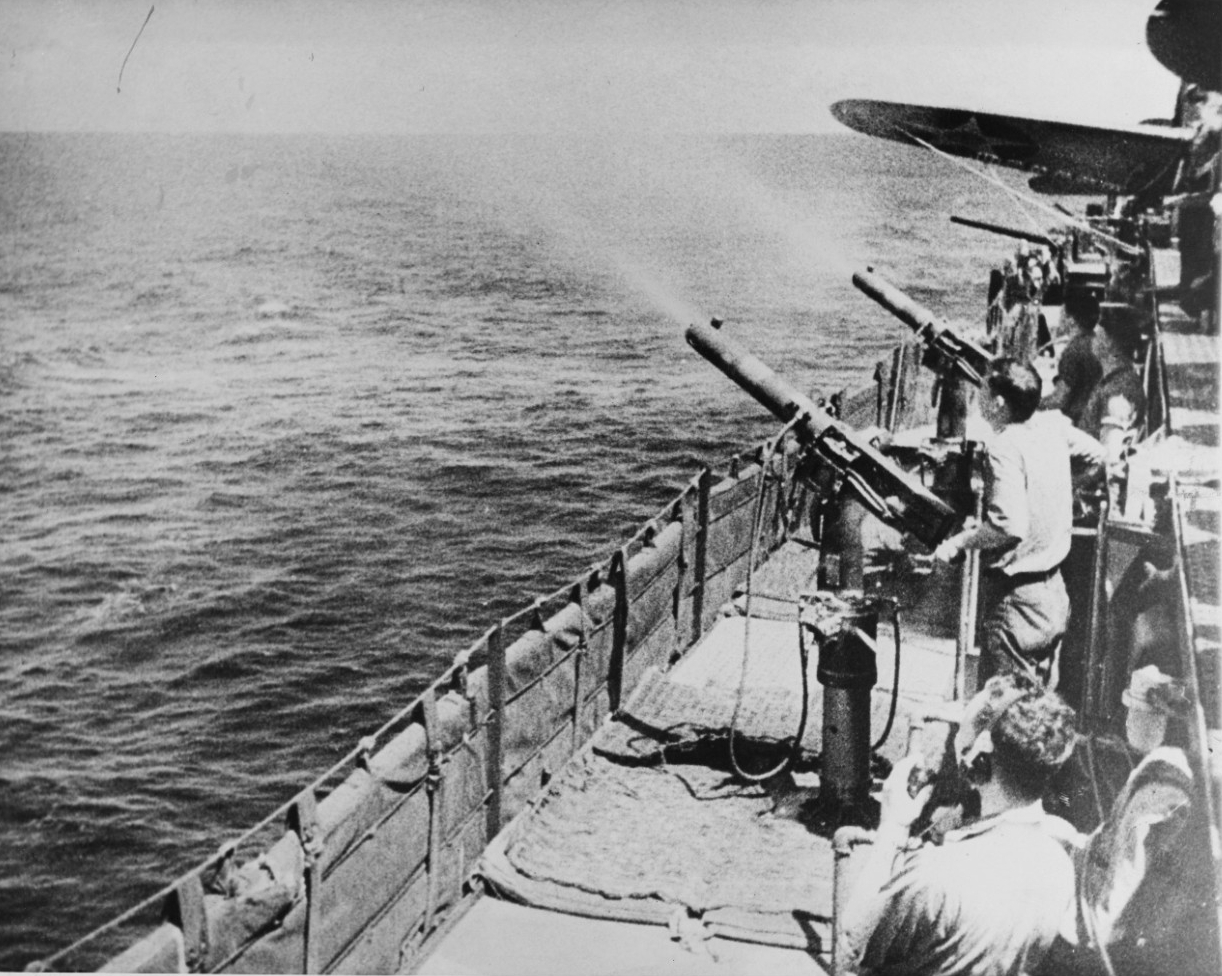 NH 50935. On board Enterprise, 1 February: The .50-caliber anti-aircraft gun gallery in action against attacking Japanese planes during the Marshall Islands raid. 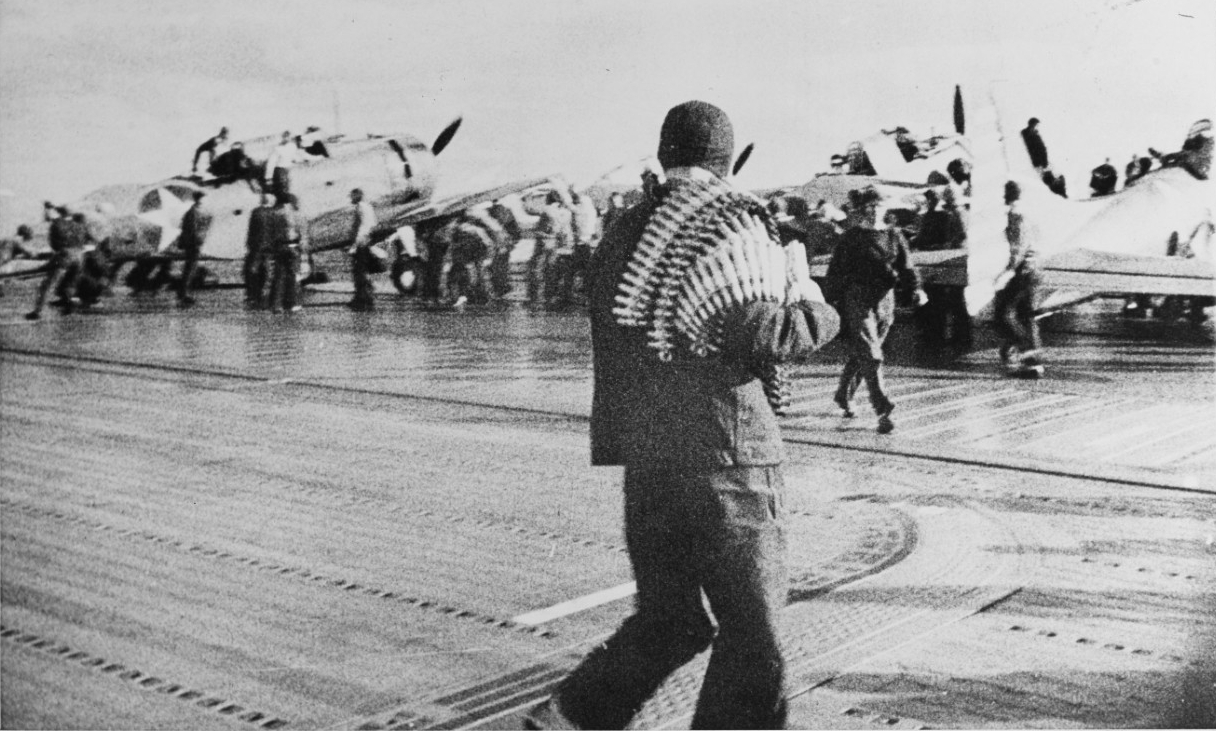 NH 50941. Scene on the Enterprise’s flight deck, 1 February. Note belts of .50-caliber ammunition being carried by the crewman in the foreground. The aircraft in the background are Douglass SBD-3 Dauntless scout/dive bombers.

On 20 February, Task Force Baker, comprised of USS Lexington (CV-2), four heavy cruisers, and ten destroyers, attacked Rabaul, the strong Japanese forward operating base in New Britain. The strike’s objective was to disrupt the concentration of Japanese forces for invasions of New Caledonia and the New Hebrides. Targets were hit by shore bombardment and naval air attacks in conjunction with attacks by U.S. Army Air Corps heavy bombers based in Australia.

In an effort to strike enemy forces in the direction of Japan’s home islands, plans to attack Wake Island and Eniwetok in the northern Marshalls in late February had been drawn up. On 24 February, Task Force How, which was divided into the Enterprise and Yorktown strike groups, hit Wake with air strikes and surface bombardment. In the meantime, Marcus Island, an isolated Japanese central Pacific possession, had been substituted for Eniwetok, and was subjected to naval air attacks on 4 March. 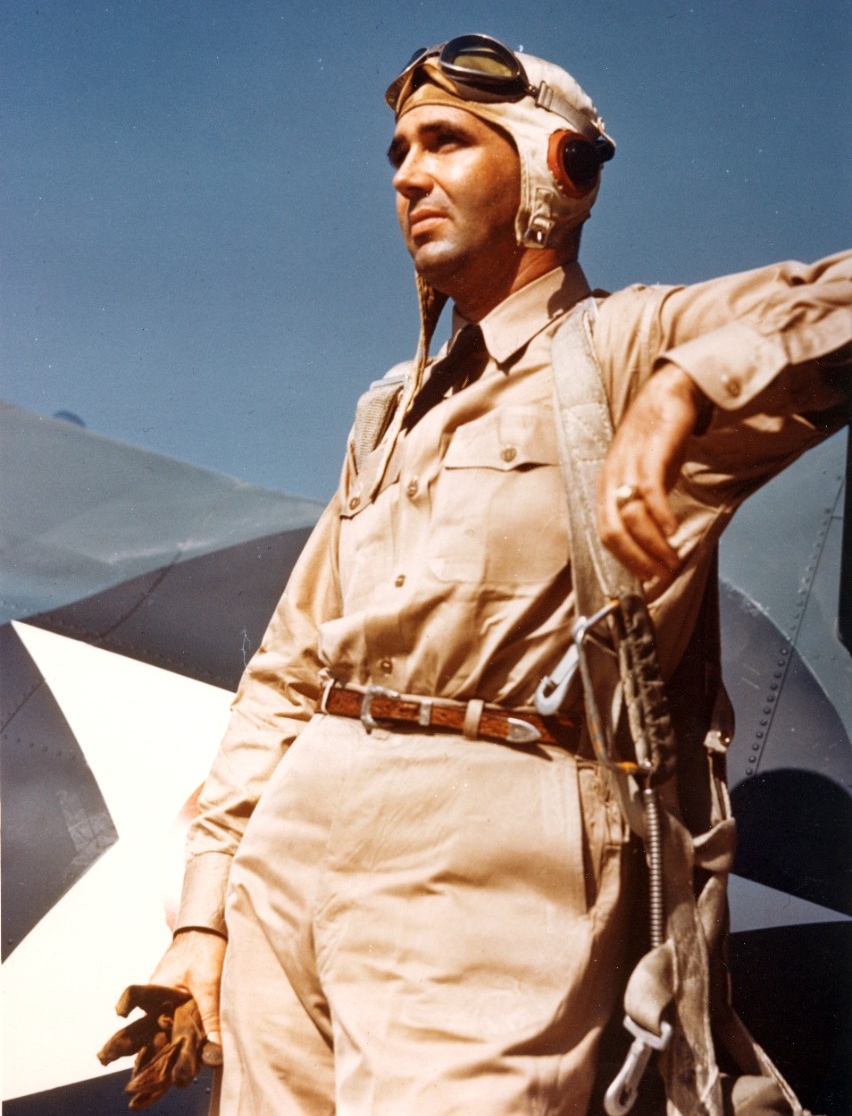 80-G-K-892-B. Lieutenant Edward H. Butch O'Hare in front of his Grumman F4F-3 Wildcat fighter, April 1942. He was awarded the Medal of Honor for shooting down five Japanese planes on 20 February 1942 while he was defending Lexington during the raid on Rabaul. 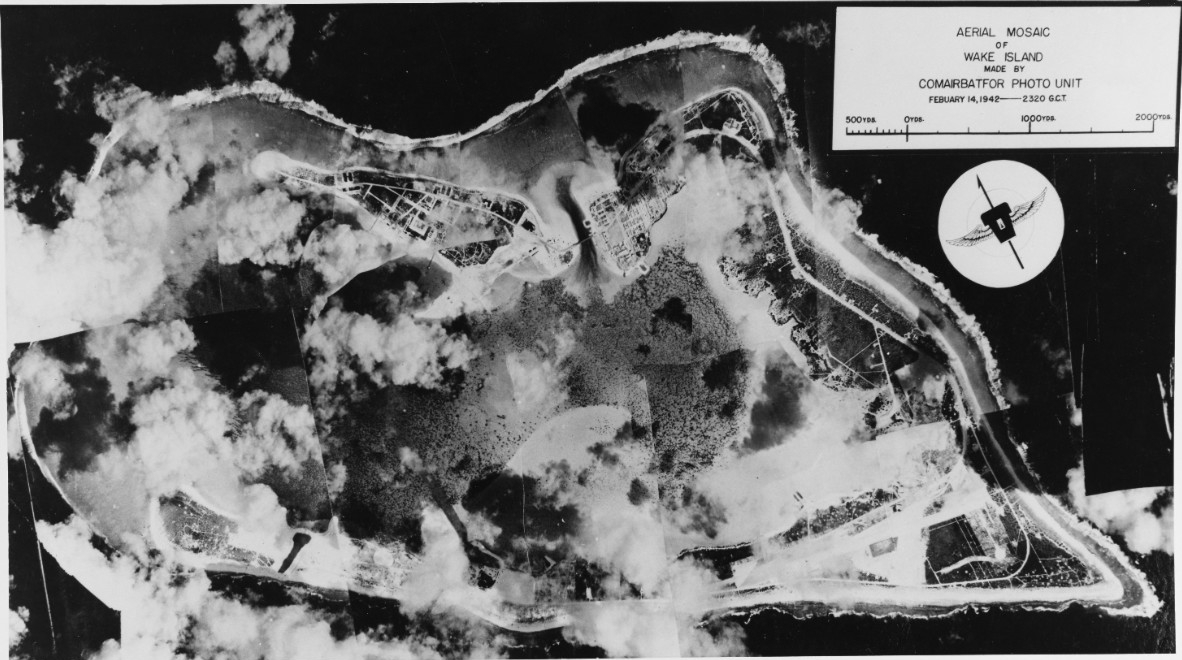 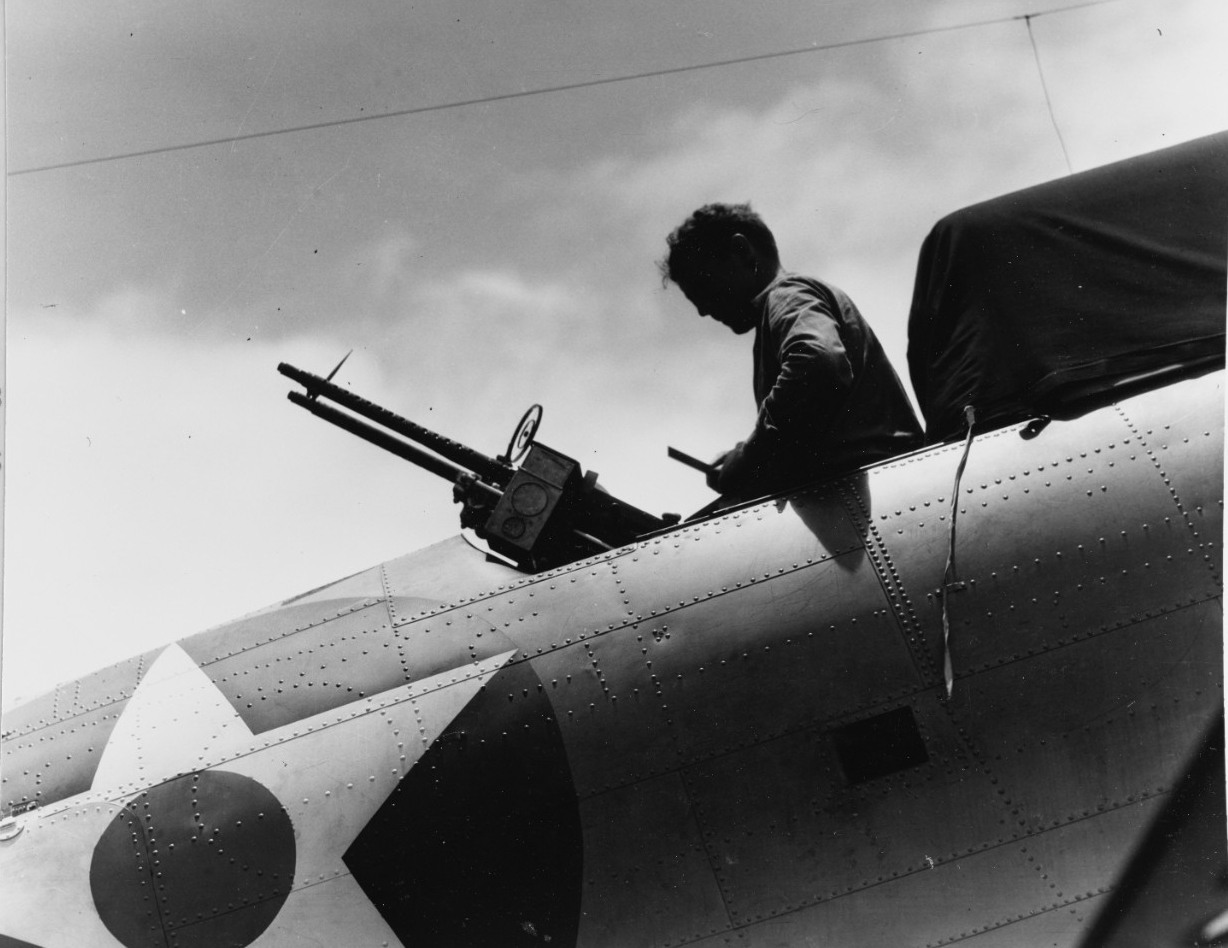 80-G-66279. On board Enterprise, an aircrewman readies the rear cockpit dual .30-caliber machine gun mount on a Douglas SBD-3 Dauntless prior to the launching of air strikes against Wake Island. 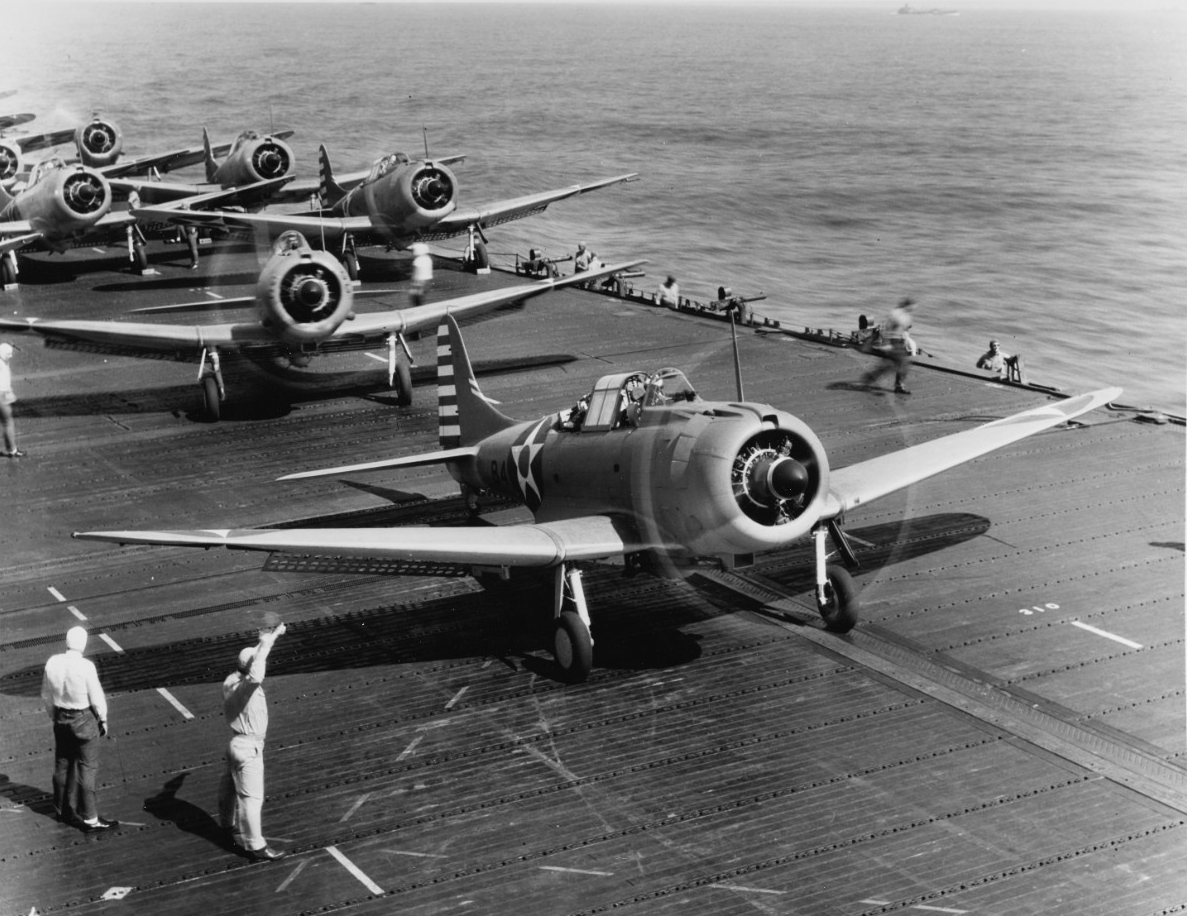 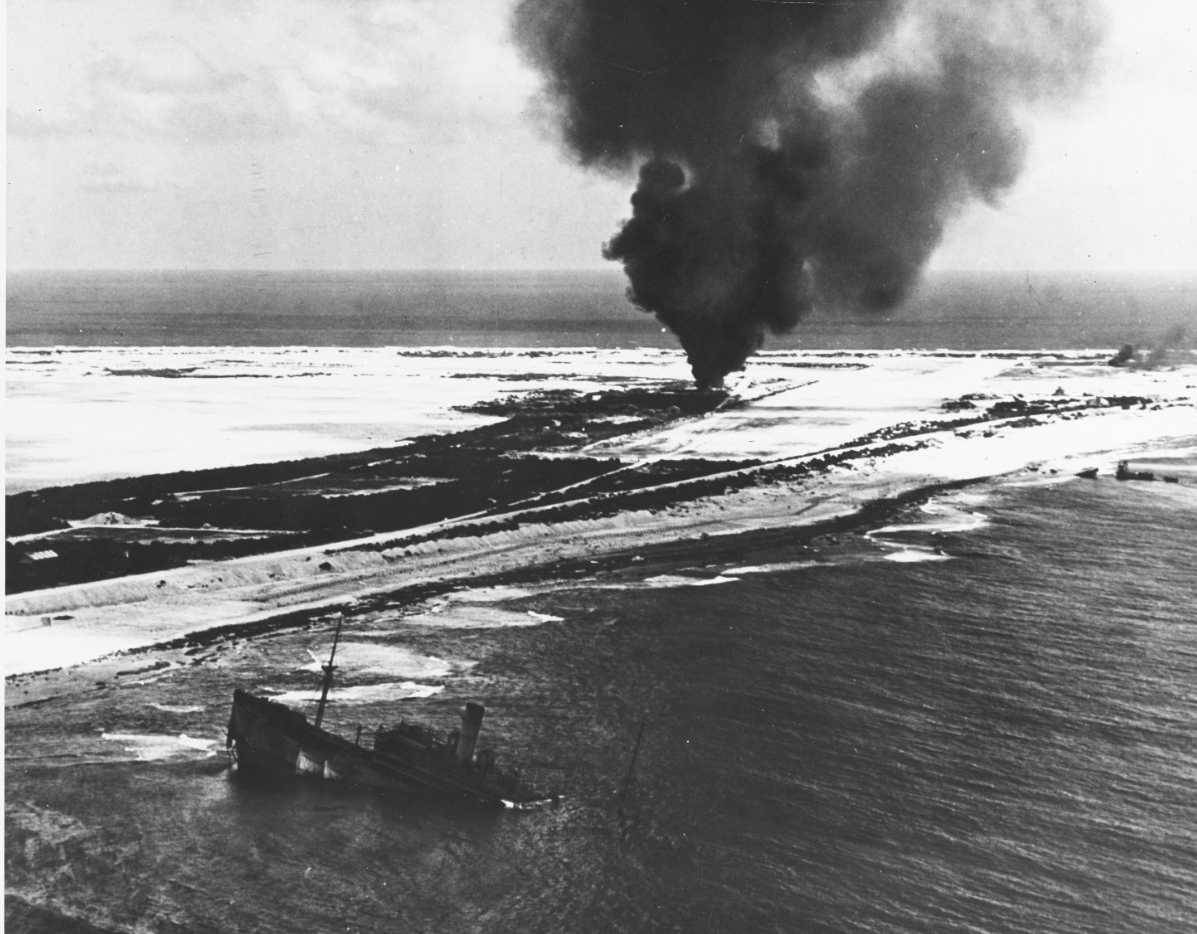 80-G-85197. Low oblique aerial view of Wake Island at the height of the attack by U.S. carrier-based planes and ship bombardment. A fire burns near the airfield, while in the foreground are the remains of a Japanese ship that was beached after being hit by Marines defending the base in December 1941. 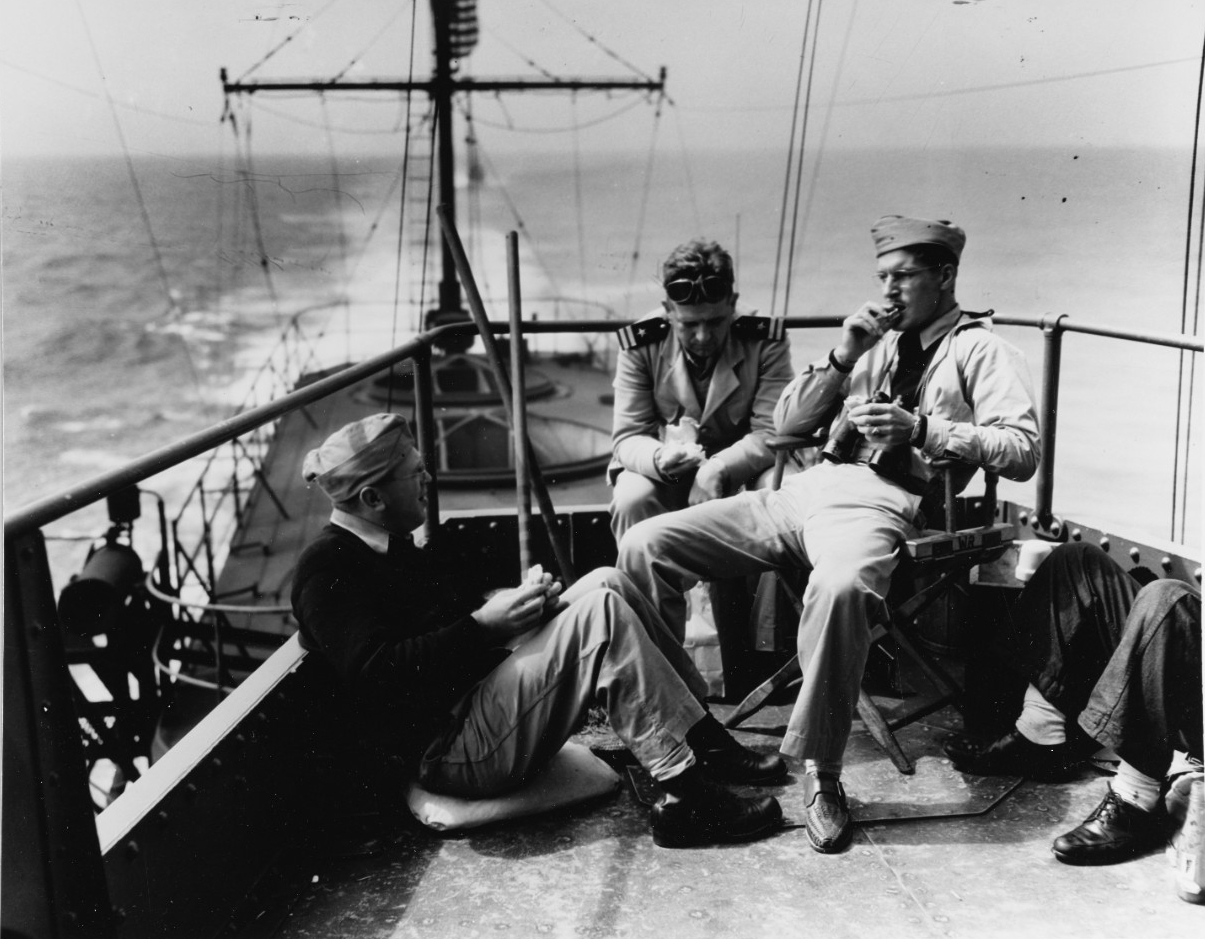 In order to check the Japanese advances in New Guinea–New Britain and to cover the movements of seaborne U.S. reinforcements into the area of operations, Japanese bases at Lae and Salamaua, both in New Guinea, were attacked on 10 March. The air raids met little resistance and also marked the first time that two U.S. Navy carrier battle groups (Lexington and Yorktown) operated on a coordinated operation. 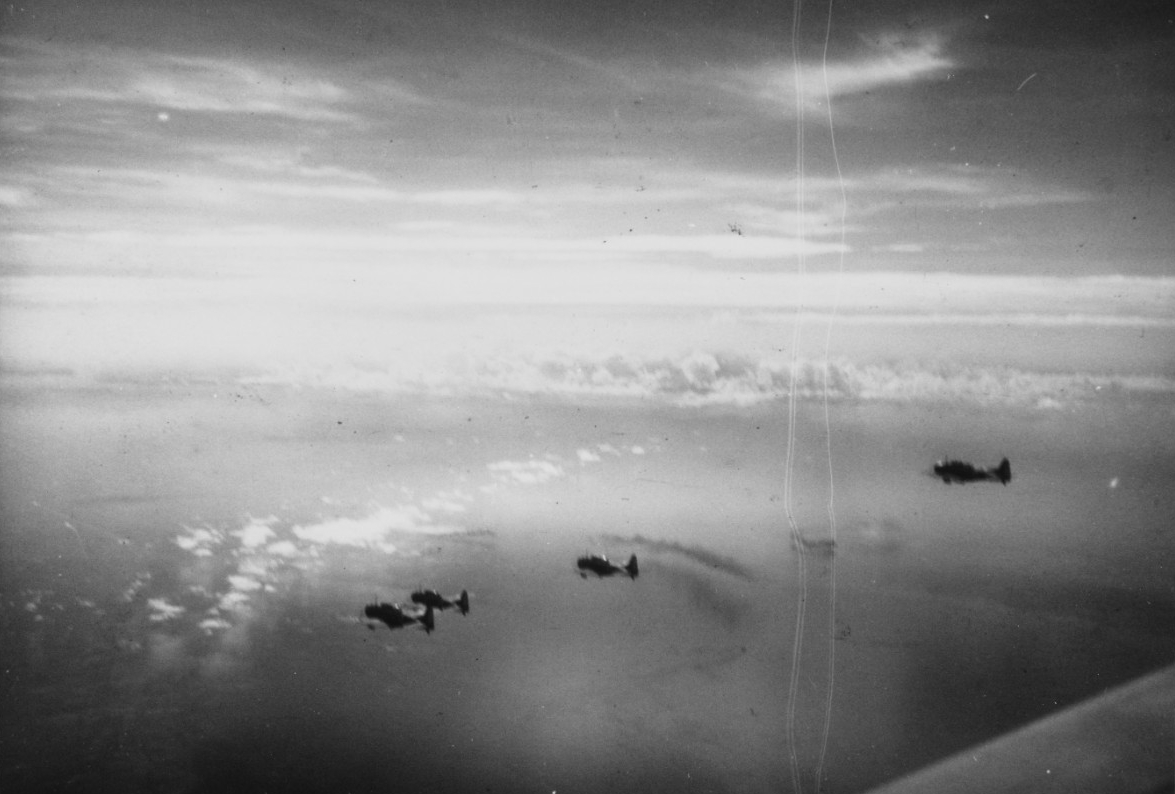 NH 95437. Douglas SBD-3 dive bombers from the Yorktown air group en route to their objective in the Lae-Salamaua area, at 14,000 feet. 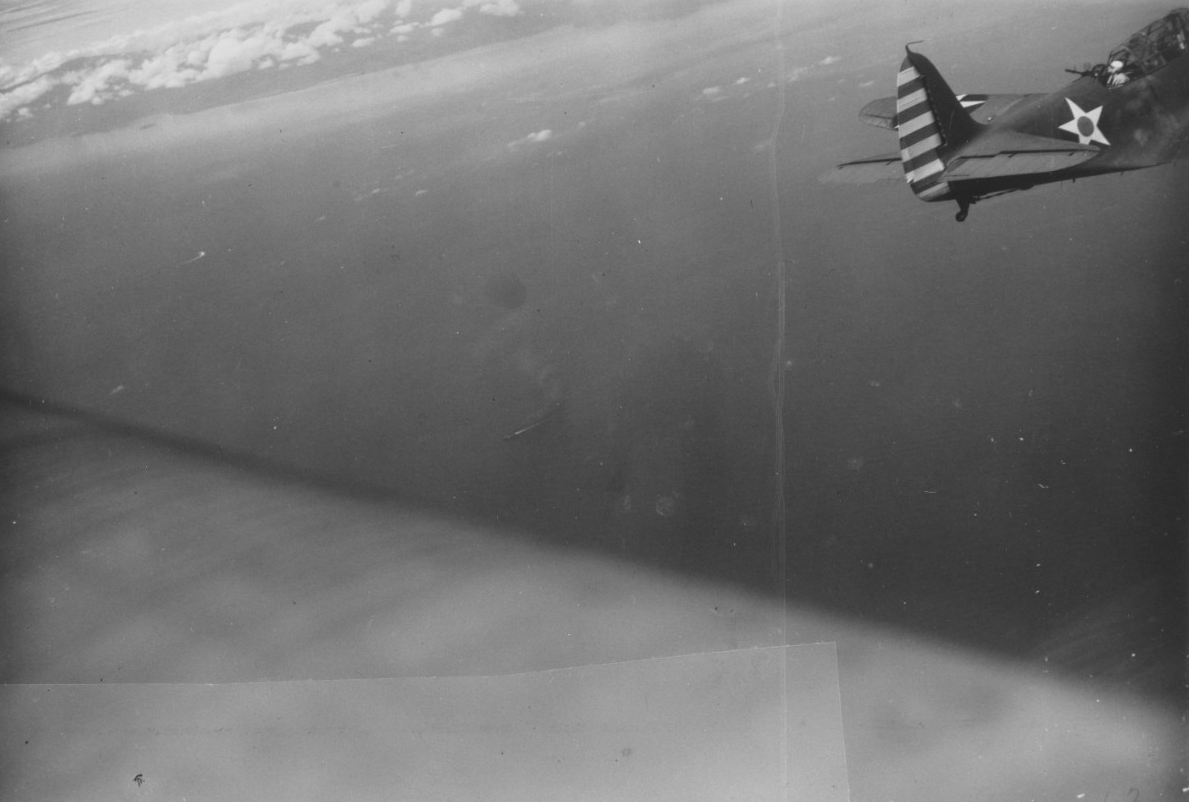 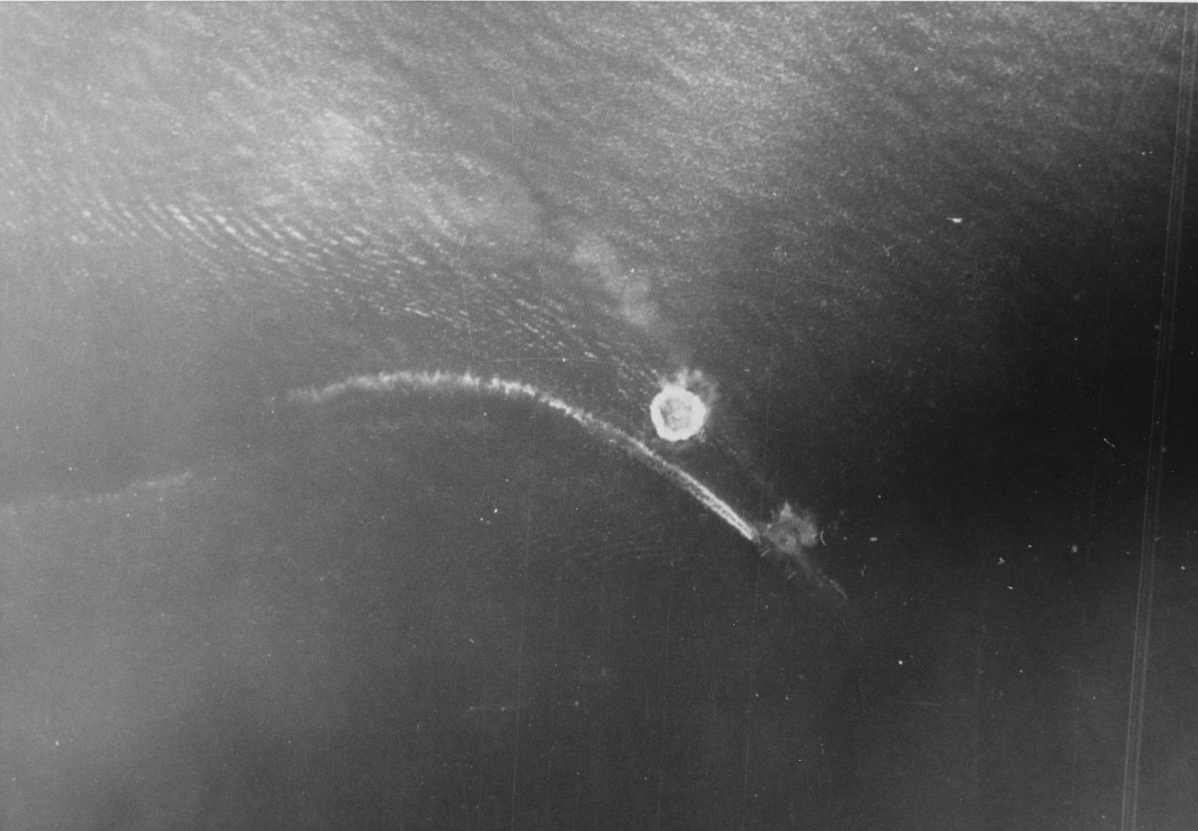 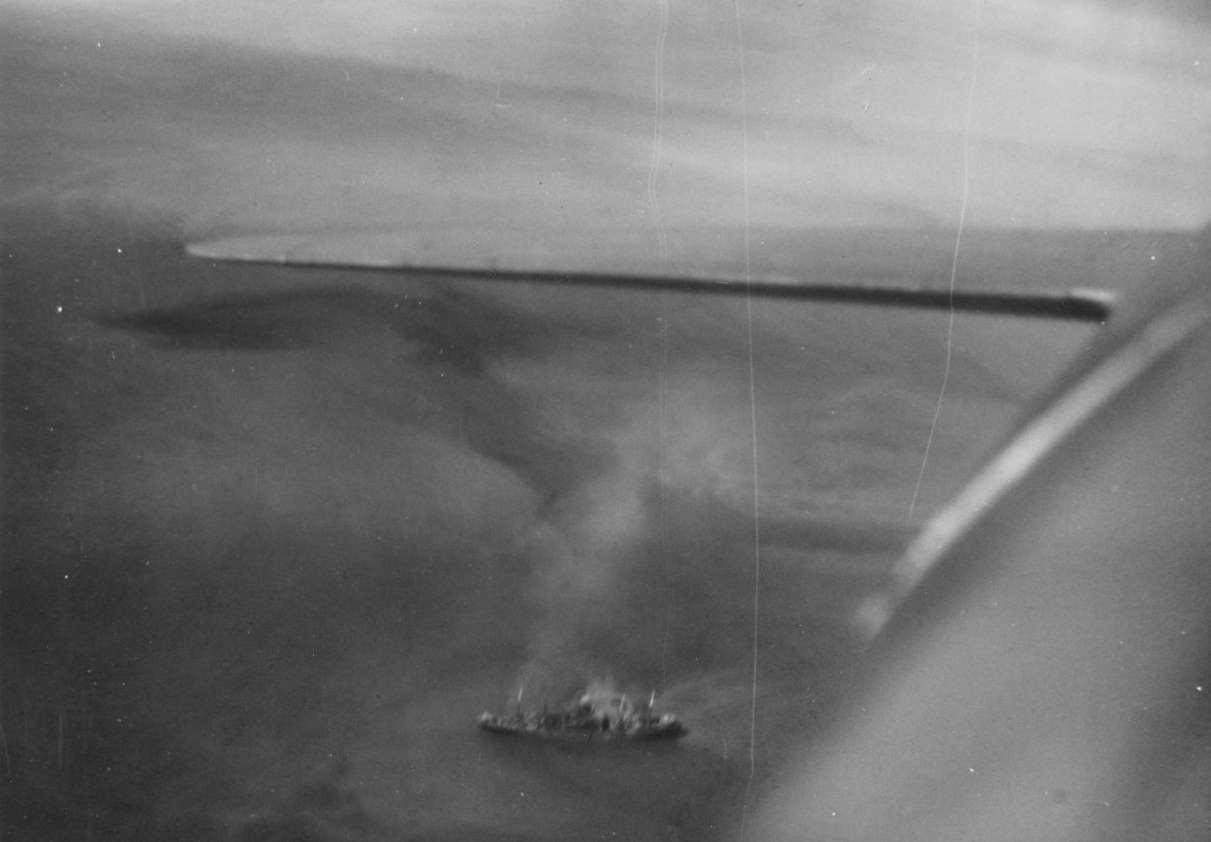 The modest scope of these early raids was to form the template for coordinated and steadily escalating naval air and surface raids on enemy territory throughout the remainder of the war. By 1945, even the Japanese home islands were being subjected regularly to naval air raids and shore bombardment.