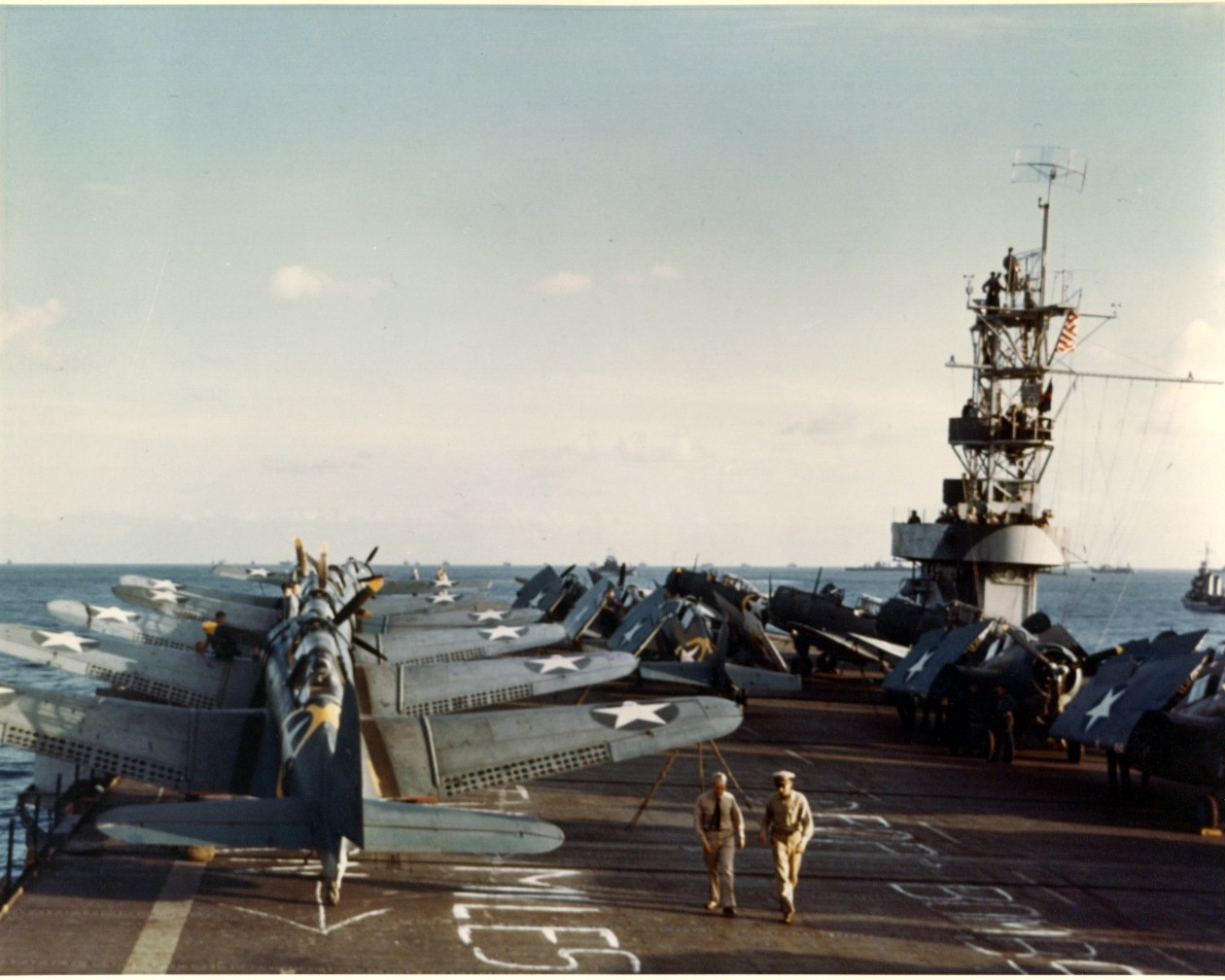 Douglas SBD-3 Dauntless scout bombers and Grumman F4F-4 Wildcat fighters on the flight deck of USS Santee (ACV-29) during Operation Torch. Note the yellow Operation Torch markings visible around the fuselage stars of some of these airplanes. Also note the distance and target information temporarily marked on the carrier's flight deck (80-K-15250).

The Allied invasion of French North Africa in November 1942 was intended to draw Axis forces away from the Eastern Front, thus relieving pressure on the hard-pressed Soviet Union. The operation was a compromise between U.S. and British planners as the latter felt that the American-advocated landing in northern Europe was premature and would lead to disaster at this stage of the war.

The operation was planned as a pincer movement, with U.S. landings on Morocco’s Atlantic coast (Western Task Force—Safi, Fedala, Mehdia–Port Lyautey) and Anglo-American landings on Algeria’s Mediterranean coast (Center and Eastern task forces—Oran, Algiers). There was also a battalion-sized airborne landing near Oran with the mission to seize two airfields. The primary objective of the Allied landings was to secure bridgeheads for opening a second front to the rear of German and Italian forces battling the British in Libya and Egypt. However, resistance by the nominally neutral or potentially pro-German Vichy French forces needed to be overcome first.

After a transatlantic crossing, the Western Task Force effected its landings on 8 November. A preliminary naval bombardment had been deemed unnecessary in the vain hope that French forces would not resist. In fact, the initially stiff French defense caused losses among the landing forces. However, by 10 November, all landing objectives had been accomplished and U.S. units were poised to assault Casablanca, whose harbor approaches were the scene of a brief, but fierce, naval engagement. The French surrendered the city before an all-out attack was launched.

The Center Task Force, composed from assets based in the United Kingdom, also encountered resistance by French shore batteries and ground forces to its 8 November landings. Vichy French warships undertook a sortie from Oran’s port, but were all either sunk or driven ashore. After an attempt to capture the port facilities failed, heavy British naval gunfire brought about Oran’s surrender on 9 November.

Operations of the Eastern Task Force (also arriving from Britain) were aided by an anti-Vichy coup that took place in Algiers on 8 November. Thus, the level of French opposition at the landing beaches was low or non-existent. The only serious fighting took part in the port, where U.S. Army Rangers were landed to prevent the French from destroying facilities and scuttling ships. Resistance had been overcome by the evening of 10 November, when the city was surrendered to the U.S. and British forces. 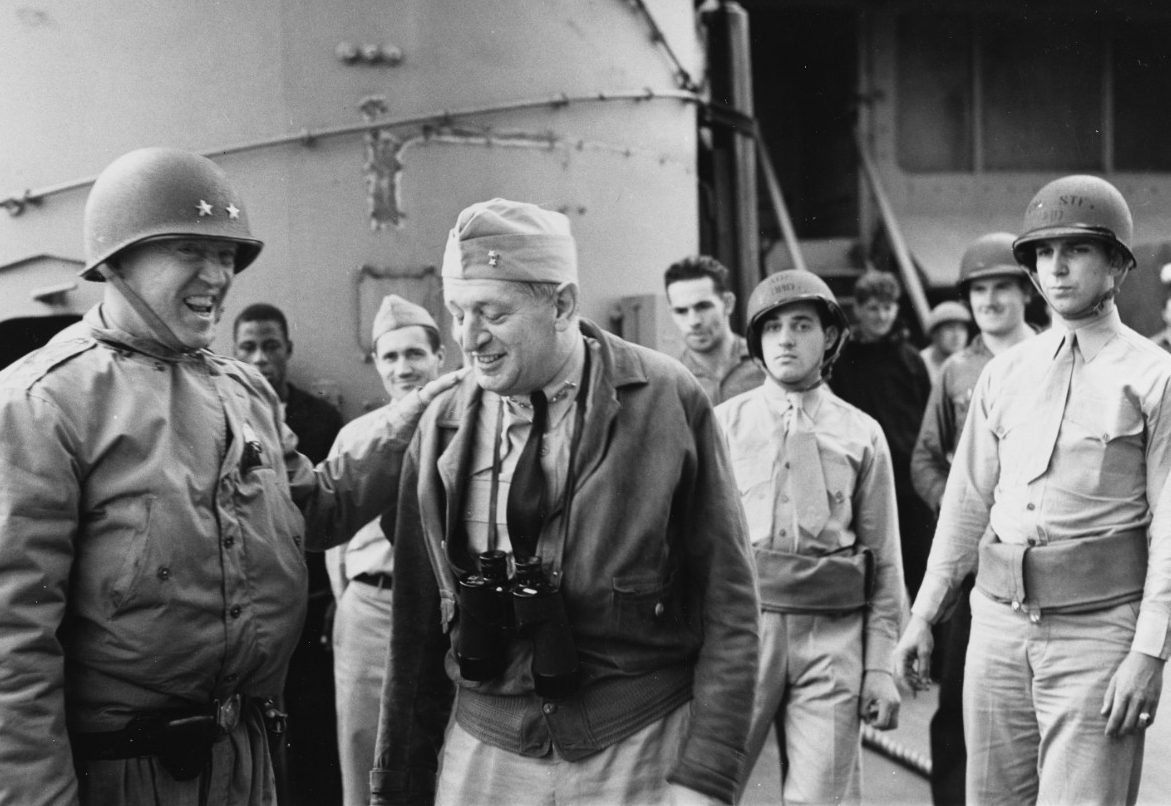 The invasion of North Africa accomplished much for the Allies. Perhaps most important, American and British forces finally had seized the offensive after three years of German and Italian forces dictating the tempo of events. Now forced to fight on both its western and eastern flank, the German-Italian Panzer-Armee Afrika faced an additional burden of having its tenuous logistical train across the Mediterranean subjected to further attack. Bases in northwest Africa, meanwhile, could contribute to the prosecution of the anti-submarine campaign in the eastern Atlantic. The movement of some 100,000 soldiers from the United States and United Kingdom through hostile waters and on to contested shores demonstrated successful, if far from perfect, collaboration between the British and American staffs. Taken in combination with the Americans’ promising campaign in the Solomon Islands and the Soviets’ apparent ability to hold in the Eastern Front, the Allies were positioned significantly better in late 1942 than they had been in the early spring. As if to drive home this point, President Roosevelt, Prime Minister Churchill, and the Combined Chiefs met at Casablanca itself in January 1943 to determine the next steps for further rolling back the Axis.

Despite these many positives, Torch also fell short of expectations. Tunis did not fall quickly to British and American forces. Their presence in North Africa and threatened assault of southern Europe also failed to draw away large numbers of Germans from the Eastern Front, a key strategic rationale given for the operation. At the tactical level, the assault upon Moroccan beaches revealed serious problems with the logistical, communication, and command-and-control approaches the Navy and Army employed for this major amphibious operation. The sailors and soldiers were also fortunate to face Vichy French defenders who fought with limited tenacity. To their credit, however, the American leaders acknowledged these various shortcomings and their good fortune. Almost immediately, they set to using this experience in preparation for tougher tests in the near future. 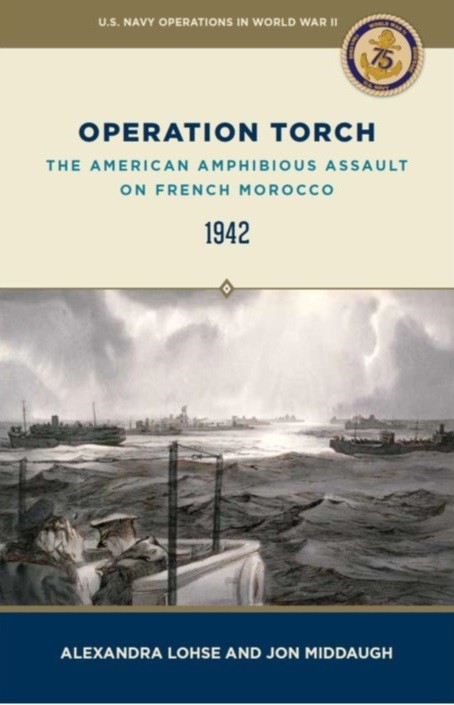 The following selected documents in the NHHC library and archives and from the U.S. Army's Center of Military History (CMH) provide additional insights into many aspects of Operation Torch:

Northwest Africa: Seizing the Initiative in the West (CMH)