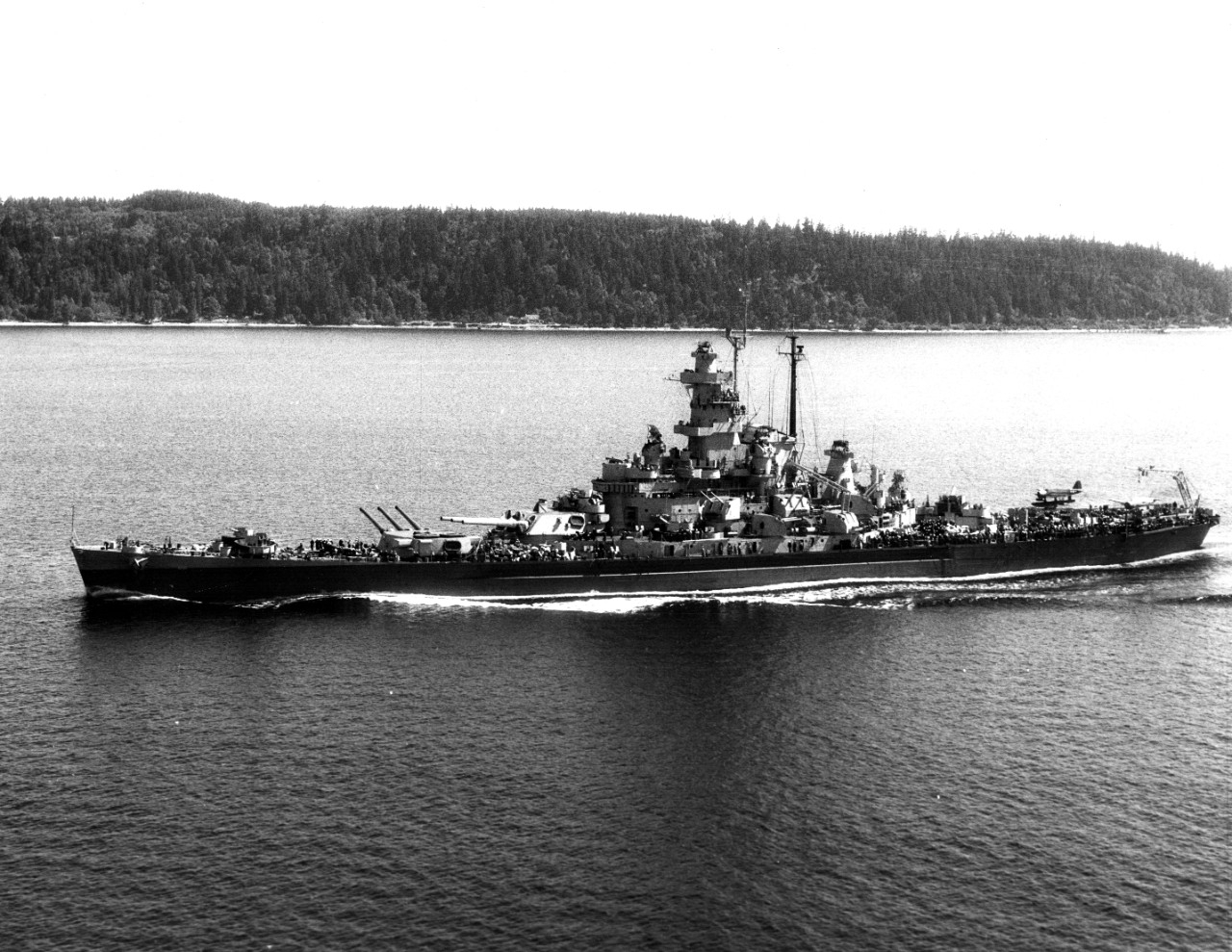 Massachusetts (BB-59) underway at 15 knots off Point Wilson, Washington, on 11 July 1944. Official U.S. Navy photograph from the collections of the Naval History and Heritage Command, NH 97255.

One of the Thirteen Original States of the Union, the Commonwealth of Massachusetts ratified the Constitution 6 February 1788.

After shakedown, Massachusetts departed Casco Bay, Maine, 24 October 1942 and 4 days later made rendezvous with the Western Naval Task Force for the invasion of north Africa, serving as flagship for Adm. H. Kent Hewitt. While steaming off Casablanca 8 November, she came under fire from French battleship Jean Bart's 15‑inch guns. She returned fire at 0740, firing the first 16‑inch shells fired by the U.S. against the European Axis Powers. Within a few minutes she silenced Jean Bart's main battery; then she turned her guns on French destroyers which had joined the attack, sinking two of them. She also shelled shore batteries and blew up an ammunition dump. After a cease‑fire had been arranged with the French, she headed for the United States 12 November, and prepared for Pacific duty.

Massachusetts arrived at Noumea, New Caledonia, 4 March 1943. For the next months she operated in the South Pacific, protecting convoy lanes and supporting operations in the Solomons. Between 19 November and 21 November, she sailed with a carrier group striking Makin, Tarawa, and Abemama in the Gilberts; on 8 December she shelled Japanese positions on Nauru; and on 29 January 1944 she guarded carriers striking Tarawa in the Gilberts.

The Navy now drove steadily across the Pacific. On 30 January Massachusetts bombarded Kwajalein, and she covered the landings there 1 February. With a carrier group she struck against the Japanese stronghold at Truk 17 February. That raid not only inflicted heavy damage on Japanese aircraft and naval forces, but also proved to be a stunning blow to enemy morale. On 21 to 22 February, Massachusetts helped fight off a heavy air attack on her task group while it made raids on Saipan, Tinian, and Guam. She took part in the attack on the Carolines in late March and participated in the invasion at Hollandia 22 April which landed 60,000 troops on the island. Retiring from Hollandia, her task force staged another attack on Truk.

Massachusetts shelled Ponape Island 1 May, her last mission before sailing to Puget Sound to overhaul and reline her gun barrels, now well‑worn. On 1 August she left Pearl Harbor to resume operations in the Pacific war zone. She departed the Marshall Islands 6 October, sailing to support the landings in Leyte Gulf. In an effort to block Japanese air attacks in the Leyte conflict, she participated in a fleet strike against Okinawa 10 October. Between 12 and 14 October, she protected forces hitting Formosa. While part of TG 38.3 she took part in the Battle for Leyte Gulf 22 to 27 October, during which planes from her group sank four Japanese carriers off Cape Engano.

Stopping briefly at Ulithi, Massachusetts returned to the Philippines as part of a task force which struck Manila 14 December while supporting the invasion of Mindoro. Massachusetts sailed into a howling typhoon 17 December, with winds estimated at 120 knots. Three destroyers sank at the height of the typhoon's fury. Between 30 December and 23 January 1945, she sailed as part of TF 38, which struck Formosa and supported the landing at Lingayen. During that time she turned into the South China Sea, her task force destroying shipping from Saigon to Hong Kong, concluding operations with airstrikes on Formosa and Okinawa.

From 10 February to 3 March, with the 5th Fleet, Massachusetts guarded carriers during raids on Honshu. Her group also struck Iwo Jima by air for the invasion of that island. On 17 March, the carriers launched strikes against Kyushu while Massachusetts fired in repelling enemy attacks, splashing several planes. Seven days later she bombarded Okinawa. She spent most of April fighting off air attacks, while engaged in the operations at Okinawa, returning to the area in June, when she passed through the eye of a typhoon with 100‑knot winds 5 June. She bombarded Minami Daito Jima in the Ryukyus 10 June. 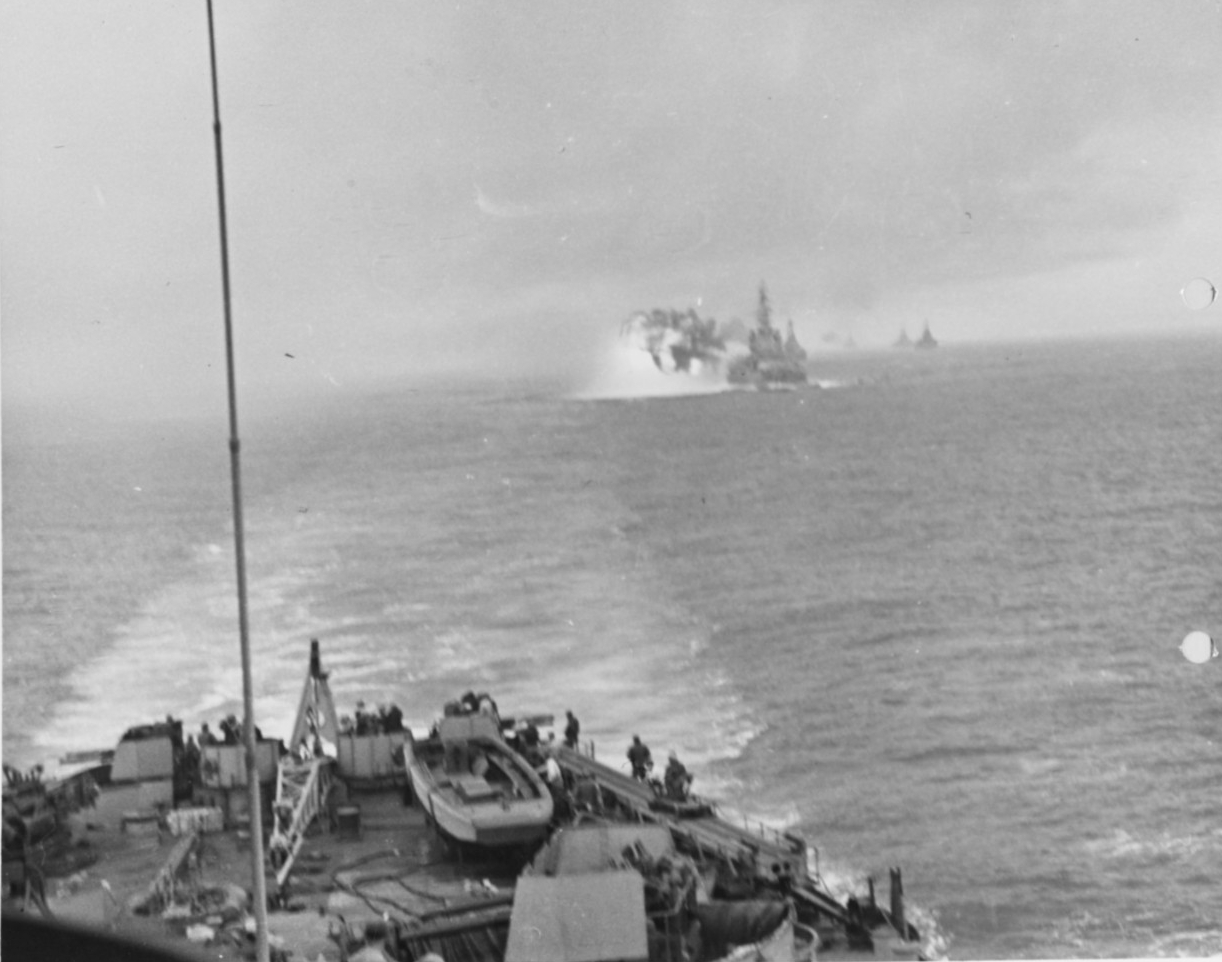 Victory won, the fighting battleship sailed for Puget Sound and overhaul 1 September. She left there 28 January 1946 for operations off the California coast, until leaving San Francisco for Hampton Roads, arriving 22 April. She decommissioned 27 March 1947 to enter the Atlantic Reserve Fleet at Norfolk, and was struck from the Naval Register 1 June 1962.

"Big Mamie," as she was affectionately known, was saved from the scrap pile when she was transferred to the MassachusettsMemorial Committee 8 June 1965. She was enshrined at Fall River, Mass., 14 August 1965, as the Bay State's memorial to those who gave their lives in World War II.