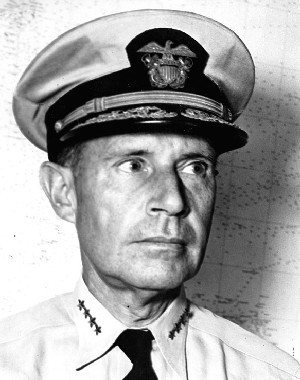 Raymond Ames Spruance was born in Baltimore, Maryland, on 3 July 1886, son of Alexander P. and Annie Ames (Hiss) Spruance. He attended high schools in East Orange, New Jersey, and Indianapolis, Indiana, and Stevens Preparatory School, Hoboken, New Jersey, before entering the US Naval Academy, Annapolis, Maryland, on appointment from Indiana in 1903. Graduated on 12 September 1906, with the Class of 1907, he served the two years at sea, then required by law, and was commissioned Ensign on 13 September 1908. Advancing progressively in rank, he attained that of Admiral, to date from 4 February 1944. He was transferred to the Retired List of the US Navy in that rank on 1 July 1948.

After graduation from the Naval Academy in 1906, he served on USS Iowa until July 1907, then joined USS Minnesota, in which he made the World Cruise of the Fleet. In April 1909, he reported for instruction in electrical engineering at the General Electric Company, Schenectady, New York. Again ordered to sea, he served from May 1910 until October 1911 on USS Connecticut, after which he was Senior Engineer Officer of USS Cincinnati. In March 1913, he assumed command of USS Bainbridge. He returned to the United States in May 1914 and was assigned as Assistant to the Inspector of Machinery at the Newport News (Virginia) Shipbuilding and Dry Dock Company.

During the period February to June 1916, he assisted in fitting out USS Pennsylvania and served on board that battleship from her commissioning, 12 June 1916 until November 1917. The last year of World War I, he was assigned as Assistant Engineer Officer of the Navy Yard, New York, New York, with additional temporary duty in London, England, and Edinburgh, Scotland, in connection with fire control.

In January 1919, he reported as Executive Officer of USS Agamemnon, employed in returning troops to the United States after the end of the war. Between April 1919 and June 1921, he successively fitted out and commanded USS Aaron Ward and USS Percival. He was assigned to the Bureau of Engineering, Navy Department, Washington, DC, to the Commander Naval Forces Europe. He then assumed command of USS Dale and later commanded USS Osborne.

He attended the Senior Course at the Naval War College, Newport, Rhode Island, during the period July 1926 to May 1927, after which he had a tour of duty in the Office of Naval Intelligence, Navy Department. In October 1929, he reported as Executive Officer of USS Mississippi and in June 1931 returned to the Naval War College for duty on the Staff. He was Chief of Staff and Aide to Commander Destroyers, Scouting Fleet from May 1933 until March 1935, then again served on the Staff of the Naval War College until April 1938, when he rejoined USS Mississippi this time to serve until January 1940 as Commanding Officer.

In February 1940 he became the Commandant of the Tenth Naval District with headquarters in San Juan, Puerto Rico, and in July 1941 was assigned additional duty as Commander Caribbean Sea Frontier. He assumed command on 17 September 1941, of Cruiser Division Five, and served as second in command during operations in the Marshall Islands and at Wake Island in February 1942; and in the same capacity during the Marcus Island operations the following months. He was Junior Task Force Commander during the Battle of Midway in June 1942, when his force assisted in inflicting on the Japanese Navy its first decisive defeat in three hundred and fifty years.

He was awarded the Distinguished Service Medal and cited as follows: “For exceptionally meritorious service… as Task Force Commander, United States Pacific Fleet. During the Midway engagement which resulted in the defeat of and heavy losses to the enemy fleet, his seamanship, endurance, and tenacity in handling his task force were of the highest quality.”

He is also entitled to the Ribbon for and a facsimile of the Presidential Unit Citation awarded the USS Enterprise.

In June 1942 he reported as Chief of Staff and Aide to the Commander in Chief, US Pacific Fleet, and in September of that year was designated Deputy Commander in Chief. In August 1943, he became Commander Central Pacific Force, which on 29 April 1944 was redesignated Commander Fifth Fleet. During these Pacific assignments, he was in overall command of the occupation of the Gilbert Islands, November 1943; the invasion of the Marshalls, January 1944; operations for the capture of Saipan, Guam and Tinian in the Marianas, which included the Battle of the Philippine Sea, 19  20 June, 1944, and later for the capture of Iwo Jima and Okinawa.

He was awarded Gold Stars in lieu of the Second and Third Distinguished Service Medals. The citations follow in part according to dates of action:

Gold Star in lieu of the Third Distinguished Service Medal: “For exceptionally meritorious service...as Chief of Staff and later as Deputy Commander in Chief, Pacific Fleet, while serving on the staff of Commander in Chief, Pacific Fleet and Pacific Ocean Areas, from June 18, 1942 to August 5, 1943…(He) exercised sound judgment, keen foresight and expert administrative ability in carrying out his many and varied duties, and… contributed materially to increasing the tempo of the war against Japan…”

Gold Star in lieu of the Second Distinguished Service Medal: “…in a position of great responsibility as Commander Central Pacific Force, U.S. Pacific Fleet, during the seizure and occupation of the Gilbert Islands in November 1943. In command of naval forces and certain Army amphibious and air forces during the assaults on Tarawa, Makin and Apamama, Vice Admiral Spruance conducted this action with daring strategy brilliant employment of the units of this command. The expeditious completion of this vital operation under his forceful leadership assured success in opening the Central Pacific Area to the United States Forces.”

He was also awarded the Navy Cross “for extraordinary heroism as Commander Fifth Fleet in action against enemy Japanese forces during the invasion and capture of Iwo Jim, Volcano Islands, and Okinawa, Ryukyu Islands, from January to May 1945…” The citation further states in part:

“Responsible for the operation of a vast and complicated organization which included more than 500,000 men of the Army, Navy and Marine Corps, 318 combatant vessels and 1139 auxiliary vessels, (he) directed the forces under his command with daring, courage and aggressiveness. Carrier units of his force penetrated waters of the Japanese Homeland and Nansei Shoto and inflicted severe damage upon hostile aircraft, shore installations and shipping…”

Detached from command of the Fifth Fleet on 8 November 1945, following the capitulation of the Japanese in August of that year, he relieved Fleet Admiral Chester W. Nimitz, USN, as Commander in Chief, US Pacific Fleet and Pacific Ocean Areas. He was relieved of that command on 1 February 1946 and ordered to duty as President of the Naval War College, Newport, Rhode Island.

On 16 October 1946, the former Secretary of War, the Honorable Robert P. Patterson, presented the Army Distinguished Service Medal to Admiral Spruance, with citation as follows:

“Admiral Raymond A. Spruance, U.S. Navy, as Task Force Commander during the capture of the Marshall and Marianas Islands, rendered exceptionally meritorious and distinguished services from January to June 1944. During the joint operations leading to the assault and capture of the important enemy bases, complete integration of Army and Navy units was accomplished under his outstanding leadership, enabling all the forces to perform their closely coordinated missions with outstanding success.”

On 18 March 1948, Admiral Spruance was presented the Insignia and Chancery documents of the decoration of Grand Officer of the Order of Leopold with Palm and the Croix de Guerre with Palm, by the Belgian Ambassador for the Prince Regent of Belgium.

He continued duty as President of the Naval War College until relieved of active duty pending his retirement on 1 July 1948. Shortly before his retirement, he received the following Letter of Commendation from the Secretary of the Navy: "Your brilliant record of achievement in World War II played a decisive part in our victory in the Pacific. At the crucial Battle of Midway your daring and skilled leadership routed the enemy in the full tide of his advance and established the pattern of air-sea warfare which was to lead to his eventual capitulation..."

Admiral Spruance was appointed Ambassador to the Republic of the Philippines by President Harry S. Truman in January 1952 and his resignation was accepted by President Dwight D. Eisenhower on 31 March 1955.

In addition to the Navy Cross, the Distinguished Service Medal with two Gold Stars, the Army Distinguished Service Medal, the Commendation Ribbon and the Presidential Unit Citation Ribbon, Admiral Spruance had the Victory Medal, Overseas Clasp (World War I); American Defense Service Medal, Fleet Clasp; Asiatic-Pacific Campaign Medal; World War II Victory Medal; and the Navy Occupation Service Medal, Asia Clasp. Besides the Belgian decorations, he had the Gold Cross of the Chevalier of the Order of the Savior from the Government of Greece, and the Honorary Companion of the Order of the Bath from Great Britain.

Admiral Spruance died on 13 December 1969, at his home in Pebble Beach, California. 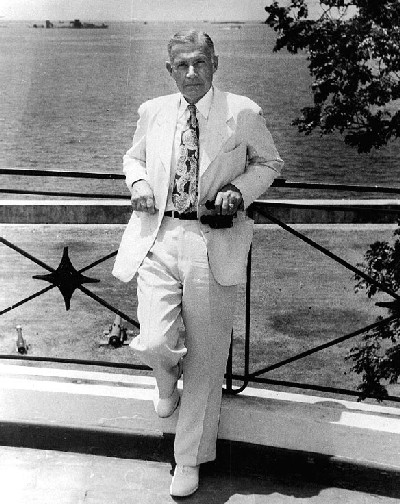