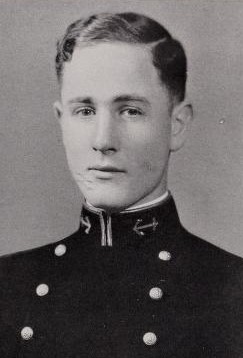 John Austin Collett was born in Omaha, Nebraska, on March 31, 1908. He attended John Eaton School, Washington, DC, and prepared for the U.S. Naval Academy at the Swaverly Preparatory School, Manassas, Virginia. Appointed Midshipman from Nebraska, he entered the Naval Academy on June 16, 1925, and as a Midshipman was Advertising Manager of the Log for two years. He was graduate and commissioned Ensign on June 6, 1929, and was promoted as follows: Lieutenant (jg), June 6, 1932; Lieutenant, June 3, 1937; and Lieutenant Commander, to date from January 1, 1942.

After graduation from the Naval Academy, he was assigned first to the USS Texas, and detached on November 3, 1930, reported for flight at the Naval Air Station, Pensacola, Florida. He was designated Naval Aviator (hta), on July 23, 1931 and reported on September 18 to the USS Chester for duty with aviation unit, Scouting Squadron 9-S, as Junior Aviator. In June 1934 he was transferred to Patrol Squadron 1-F, based at Pearl Harbor, T.H., and had duty as Squadron Personnel Officer. From June 1936 to January 1938 he had consecutive duty as Assistant Flight Officer, Torpedo Squadron 2, based on the USS Saratoga, and as Engineering Officer of Torpedo Squadron 5, based on the Yorktown.

Transferring to the Savannah in January 1938, he served as Senior Aviator of her Air Unit from its commissioning March 10, that year, until June 1939 when he returned to Pearl Harbor. There he served with Patrol Squadron 22 and 23 until June 5, 1941, when he was ordered to Torpedo Squadron 3, carrier based. In February 1942 he went to the Fleet Air Detachment, Naval Air Station, San Diego, California, to fit out a Torpedo Squadron, and on March 27, assumed command.

Lieutenant Commander Collett was reported Missing in Action on October 26, 1942, while commanding a Torpedo Squadron, when the plane which he was piloting was shot down in the Battle of Santa Cruz, in the Solomon Islands. In compliance with section 5 of Public Law 490, as amended, death is presumed to have occurred on October 27, 1943, a year and a day later.