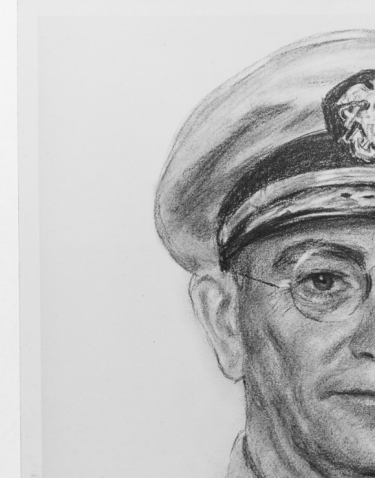 Willis Augustus Lee was born in Natlee, Kentucky, on 11 May 1888, and was appointed to the US Naval Academy, Annapolis, Maryland, from his native state in 1904. While a midshipman, he won his letter on the Rifle Team, qualified as an expert rifleman, was awarded the Gold Medal for small arms efficiency as a Second Classman, and was a member of the Naval Academy rifle Team which participated in the National Rifle Match at Camp Perry, Ohio in 1907, winning the National individual match and the National pistol match. As a First classman he had his name engraved on the cup presented by the Sons of the Revolution (General Society) for proficiency in great gun target practice or practical ordnance and gunnery. Graduated and commissioned Ensign in the US Navy (after two years at sea, then required by law after completing the four-year course at the Naval Academy), on 6 June 1910, he subsequently advanced in rank to that of Vice Admiral, to date from 21 March 1944.

Completing the course at the Naval Academy in June 1908, he remained there as a member of the Navy Rifle Team during that summer, then served on board the USS Idaho from October 1908 until May 1909. Again serving with the Navy Rifle Team during the summer of 1909, he assisted in assembling the crew of the USS New Orleans in October, that year, then served on board that cruiser from her commissioning, 15 November 1909, until May 1910. Next assigned to the USS Helena, on Asiatic Station, he was detached from that cruiser in January 1913 to return to the United States to take part in the National Rifle Match. In July he rejoined the battleship Idaho, and in December of the same year was transferred to join duty on board the USS New Hampshire. In the latter battleship he participated in the landing of forces engaged in the occupation of Vera Cruz, Mexico in 1914.

In December 1915 he reported to the Union Tool Company, Chicago, Illinois, where he served for three years as Inspector of Ordnance. In November 1918, a few days after the World War I Armistice was signed, he joined the Destroyer Force based on Queenstown, Ireland, assigned to the USS O'Brien. On 21 December that year, he reported to Headquarters of US Naval Forces at Brest, France, and there was assigned to the USS Lea, in which he served until June 1919. Upon his return to the United States, he again served with the Naval Rifle Team at that year's National Matches, then served as Executive Officer of the USS Bushnell, Flagship and tender of Submarine Division, Atlantic Fleet, from September 1919 until June 1920. That summer he was a member of the American Rifle Team at the Olympic Games, Antwerp, Belgium, winning with Commander Carl T. Osburn, USN, nine gold, two silver and two bronze medals, and winning personally five first, one second and one third.

From September 1920 until June 1924 he had successive command of the USS Fairfax and USS William B. Preston, sailing the latter to China Station via the Suez Canal, from Newport, Rhode Island, in 1921. Upon his return to the United States, he was assigned duty at the New York Navy Yard, and while there until November 1926 again participated in the National Rifle Matches in 1925, as Captain of the Navy Rifle Team. He next served as Executive Officer of the USS Antares, and from October 1927 until June 1928 was Commanding Officer of the USS Lardner. Completing the Senior Course at the Naval War College, Newport, Rhode Island, in May 1929, he served for a year as Inspector of Ordnance in Charge, at the Naval Ordnance Plant, Baldwin, Long Island, New York. During the summer of 1930 he was again Captain of the Navy Rifle Team which participated in the matches at Wakefield, Massachusetts and Camp Perry, Ohio.

He was next assigned to the Division of Fleet Training, Office of the Chief of Naval Operations, Navy Department, Washington, DC, and in May 1931 joined the USS Pennsylvania, Flagship of the US Fleet, for duty first as Navigator, later as Executive Officer. In June 9133 he returned to the Division of Fleet Training and served as Head of the Gunnery Section for two years and as Head of the Tactical Section in 1935-1936. In October 1936 he assumed command of the USS Concord, and when detached from that cruiser in July 1938, he reported to the Staff of Rear Admiral Harold R. Stark, USN, then commanding Cruisers, Battle Force (the Concord, Flagship), and served as Operations Officer until December 1938 and as Chief of Staff for five months thereafter while Admiral Stark's flag was in the USS Honolulu.

During his service in the Pacific Area, he commanded a Task Force which intercepted Japanese forces attempting to recapture positions in the Guadalcanal-Tulagi area. In action on the night of 14-15 November 1942 he won for all forces engaged, the "Well Done" from Fleet Admiral (then Admiral) Ernest J. King, USN, Commander in Chief, US Fleet. He was personally awarded the Navy Cross, with citation, in part as follows:

"For extraordinary heroism as Commander of a Task Force in action against enemy Japanese surface vessels off Guadalcanal, Solomon Islands, on the night of November 14-15, 1942. Upon receiving reports that a large force of hostile ships was proceeding toward Guadalcanal intent upon landing troop reinforcements and bombarding our positions on the island, Rear Admiral Lee successfully interposed his force between the Japanese and their objective...gallantly sought out and engaged an overwhelmingly powerful foe and...destroyed at least one Japanese battleship, three cruisers and one destroyer, damaged several other vessels, and turned back the remainder of the fleet...(contributing) to the frustration of a formidable Japanese offensive..."

Following the capture of the Gilbert Islands in November 1943, he commanded a Task Force which attacked Nauru, and in February 1944 he was in command of the battleships which operated with the Truk Striking Force and which took part in the carrier raids against the Saipan-Tinian area and in various other engagements. On 1 May he directed the bombardment of shore installations at Ponape which resulted in great damage to the enemy, and later at Saipan, the first stage in the Battle of the Philippine Sea, assisted in opening the way for the landing forces. On 19 June, in the Battle of the Philippine Sea, he directed his ships for maximum effectiveness when our Task Force was subjected to a full-scale attack by Japanese carrier based planes, and by the expert gunnery of his officers and men succeeded in destroying several hostile bombers. He was awarded the Legion of Merit and the Distinguished Service Medal, with citations to follow:

Legion of Merit: "For exceptionally meritorious conduct in the performance of outstanding service...as Commander of a Battleship Division, during action against enemy Japanese forces at Truk, February 16 and 17, 1944; and during raids on Saipan, Tinian, and Guam, on February 21 and 22, 1944. With the ships of his task group subjected to continuous day and night torpedo and bombing attacks, Rear Admiral Lee directed the ships under his command in assisting in the destruction of two hostile planes and maintaining a protective position for the carriers, enabled them to proceed to the initial launching point and to carry out a damaging air attack against enemy shipping, aircraft and shore installations on these strategically important islands..."

Distinguished Service Medal: "For Exceptionally meritorious service...as Commander Battleships, U.S. Pacific Fleet, and Commander of a Task Group operating against enemy Japanese forces from April through June 1944. Skillfully maneuvering his ships to form an effective screen for our carrier units throughout numerous engagements, (he) directed the bombardment of shore installations at Ponape with courageous determination, resulting in great damage to the enemy and later, at Saipan, assisted in paving the way for our landing forces. On June 19, when our task force was subjected to a full scale attack by Japanese carrier-based aircraft, he directed the movements of his ships for maximum effectiveness and, by the expert gunnery of his officers and men succeeded in destroying several hostile bombers. Vice Admiral Lee's brilliant leadership and indomitable fighting spirit contributed to the success of the Fast Carrier Task Forces and were in keeping with the highest traditions of the U.S. Naval Service."

Still in command of Battleship Squadron 2, vice Admiral Lee died of coronary thrombosis on 25 August 11945 on board a launch bearing him to the USS Wyoming, his flagship, in Casco Bay, off Portland, Maine. Interment was at Arlington National cemetery.

He was posthumously awarded a Gold Star in lieu of the Second Distinguished Service Medal, "For exceptionally meritorious service...as Commander Battleship Squadron TWO, U.S. Pacific Fleet, and Commander of a Task Force of Battleships from July 1944, to May 27, 1945..." Citation continues: "Directing his Task Force with superb tactical skill throughout a period of intense carrier activity, Vice Admiral Lee contributed to the effectiveness of protective screens in the repulsion of incessant enemy aircraft attacks, which savagely attempted to disrupt the devastating raids by our naval planes. Throughout the Battle for Leyte Gulf and the operations against the enemy Japanese-held islands of Palau, the Philippines, Iwo Jima and Okinawa, he deployed his ships to achieve maximum strength in the defense of our carriers and, by accurate bombardment of shore installations and gun positions, the neutralization of enemy resistance in preparation for our amphibious landings. (His) inspiring leadership, energetic zeal and resolute devotion to duty were vital factors in the success of Fast Carrier Task Forces during a critical period in the Pacific war..."