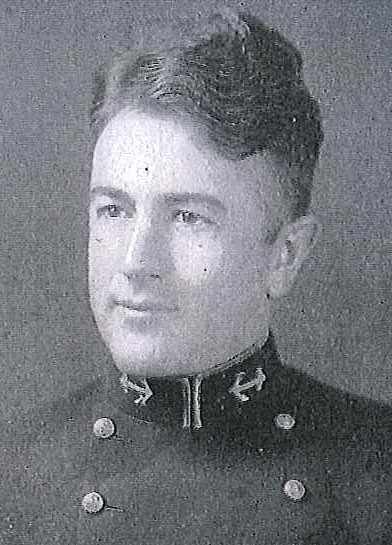 Born in Rusk, Texas, on May 31, 1911, Captain Dickey was graduated from the Naval Academy in 1934 and became a Naval Aviator in 1941. Prior to World War II he served at sea in the cruiser Northampton and Salt Lake City, and the destroyer Zane, his primary duties in gunnery, engineering and communications. In May 1941 he was assigned to Patrol Squadron 42, and after the outbreak of war continued duty as Material Officer, Flight Officer and finally Executive Officer while that squadron operated from Seattle, Alaska, and Whidbey Island.

He was awarded the Distinguished Flying Cross for “heroism and extraordinary achievement in aerial flight as Commander of a Patrol Plane in Patrol Wing FOUR, in action against enemy Japanese forces in the vicinity of the Aleutian Island during June 1942…”; and is entitled to the Ribbon for the Navy Unit Commendation awarded Patrol Squadron 42.

In March 1943 he reported to Fleet Air Wing FOURTEEN, and after various brief assignments, including fitting out duty in USS White Plains, he served from November 1943 throughout the remaining war period on board that aircraft carrier escort vessel in the Pacific, first as Air Officer, later as Executive Officer. As such he participated in the occupation of Kwajalein and Majuro, capture and occupation of Saipan, Tinian, and the Southern Palau Islands, and in Leyte landings, and is therefore entitled to the Ribbon with Star for the Presidential Unit Citation awarded Task Unit 77.4.3, with which the White Plains was serving during this period. He was in the White Plains when damaged by an 18” salvo when our escort carriers were under fire by a Japanese surface force which slipped through San Bernadino Straits in a phase of the Battle of Leyte Gulf.

In November 1945 he reported for duty as Executive Officer of the Navy’s Pre-Flight School at St. Mary’s College, and was in command for six weeks before the school was decommissioned on June 30, 1946. In August of that year he became Commanding Officer and Executive Officer of USS San Jacinto (CVL-30) ICIR, assigned to the Alameda Group, Pacific Reserve Fleet, and in January 1947 assumed duty as Commander Sub-Group ONE, Alameda Group when the organization was changed.

From March 1948 to November 1949 he served successively as Executive Officer of the Naval Air Station, Agana, Guam, and Tanapag, Saipan, with additional duty as Chief Staff Officer, Island Command, Saipan, and (briefly) Commanding Officer, Naval Air Station, Tanapag. A tour of duty as Executive Officer, NROTC, and Associate Professor of Naval Science at the University of Kansas, preceded his assignment in June 1952 as Chief Staff Officer to Commander US Naval Activities, Port Lyautey, French Morocco.

In November 1953 he was ordered to the National Security Agency, Washington, DC, and a year later was transferred to the Office of the Chief of Naval Operations, Navy Department. Under orders of September 19, 1956, he commanded the Naval Support Units, Antarctica, in the Navy’s Operation DEEP FREEZE until November 28, 1957. He next served on the Staff of Commander Naval Support Force, Antarctica at the Headquarters in Washington, DC, and in July 1958 was ordered to duty as District Inspector General, First Naval District, with headquarters in Boston Massachusetts.

Letter of Commendation (SecNav) (with Ribbon)

Distinguished Flying Cross: “For heroism and extraordinary achievement in aerial flight as Commander of a Patrol Plane in Patrol Wing FOUR, in action against enemy Japanese forces in the vicinity of the Aleutian Islands, during June 1942. Participating in numerous all-night patrols, scouting missions and strikes against shipping in Kiska Harbor during a period of extremely adverse weather, Commander Dickey carried out his assignments with skill in the face of antiaircraft fire and aerial opposition, thereby contributing materially to the success of his squadron…”

Letter of Commendation: “For outstanding performance of duty as Commander, Naval Support Units, Antarctica, with the United States Support Force, Antarctica, during Operation DEEP FREEZE II and III from January 30 to November 28, 1957. Directly responsible for the seven bases established on the Antarctic Continent for the support of scientific research in the International Geophysical Year, Captain Dickey was eminently successful in carrying out his responsibilities throughout this period. An outstanding leader and diplomat, he was instrumental in solving many problems arising from adverse weather, limited supplies and personnel, and station security. In addition, he insured for the United States the good will of all the foreign stations in Antarctica…”

The Presidential Unit Citation, with bronze star, was awarded the USS White Plains as a part of Task Unit 77.4.3, for action on October 25, 1944, off Samar Island, Philippine Islands.

The Navy Unit Commendation was awarded Patrol Squadron 42 for operations in the Northern Asiatic-Pacific Area from June 1 to August 1, 1942.

Nov 17 1954 Office of the Chief of Naval Operations, Washington, DC