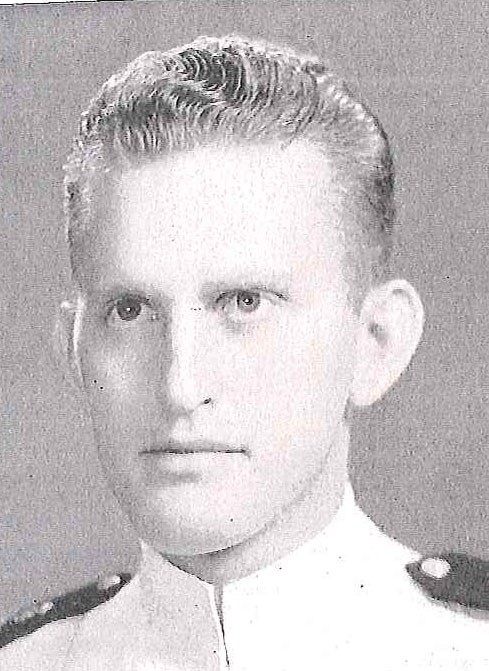 Miles Rush Finley, Jr., was born in New Orleans, Louisiana, on May 17, 1921 son of Commander Miles R. Finley, SC, USN, Retired and Mrs. (Marie Davis) Finley. During the period June 1938 to July 1939 he was enlisted recruit in the US Naval Reserve and in 1939 entered the US Naval Academy, Annapolis, Maryland, on appointment at large. Graduated with the Class of 1943, on June 19, 1942 (course of instruction reduced to three years due to World War II) and commissioned Ensign, he subsequently advanced in rank to that of captain, to date from July 1, 1962.

Following graduation from the Naval Academy in 1942, he joined USS Montgomery to serve as a junior officer various department and in May 1944 became Executive Officer of that minelayer. He is entitled to the Ribbon for, and a facsimile of the Navy Unit Commendation awarded Task Unit 32.9.3 of which the USS Montgomery was a part. The citation follows in part:

“For outstanding heroism in action against enemy Japanese forces at Angaur Islands, Peleliu, and Kossol Passage from September 12 to 15, 1944. Prior to and during the amphibious assault against the Palau Islands, Task Unit 32.9.3 boldly conducted combat minesweeping operations o permit the safe approach of vessels to the bombardment area and landing beaches and to make possible the establishment of a Fleet Anchorage at Kossol Passage. Maneuvering through the heavily mined entrance and navigable channels in this passage, these gallant ships swept and destroyed on hundred and sixteen mines off the landing beaches in the passage, despite extremely heavy losses of equipment from enemy batteries. By the courageous determination and the superb teamwork of the officers and men who manned these ships, Task Unit 32.9.3 was instrumental in making safe the early use of the Kossol Passage as a Fleet and Seaplane Anchorage…”

Detached from the Montgomery in October 1944, he next attended the Gunnery School, Washington, DC, and in April 1945 reported as Gunnery Officer on board the USS Farragut. In November of that year he joined USS John T. Craig as Executive Officer and Navigator and in October 1947 assumed command of USS Munsee. He served as an Instructor with the Naval Reserve Officers Training Corps Unit, University of Missouri at Columbia, from October 1948 until May 1950, then returned to duty afloat as Commanding Officer of USS Shields. Under his command that destroyer operated in the Korean area of hostilities. During the period April 1952 to December 1954 he was Training Officer and Operations Officer with the West Coast Sonar Training Squadron, after which he had instruction at the Industrial College of the Armed Forces, Washington, DC.

In July 1958 he assumed command of USS Brown. Detached from that destroyer in June 1960, he next served as Staff Officer and Military Assistant to the Assistant Secretary of Defense (Manpower), Washington, DC.

He remained there until July 1962 and in September of that year became Commander Destroyer Division Seventy-Two. Returning to the Industrial College of the Armed Forces, he served as Executive Officer until March 1964 and the next reported as Chief of Staff and Aide to Commander Cruiser-Destroyer Flotilla Ten. In July 1965 he was assigned duty on the Staff of the Commander in Chief, Atlantic Fleet.