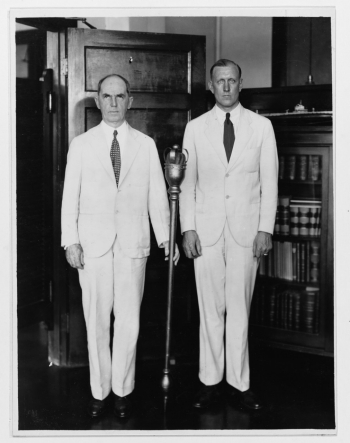 Ernest Herman von Heimburg was born in Cecil, Wisconsin, on 19 June 1896, son of Anno and Emma (Naber) von Heimburg. He attended public schools in Cecil and Marinette, Wisconsin, and the University of Wisconsin at Madison (class of 1918), before entering the United States Naval Academy, Annapolis, Maryland, by appointment from the Ninth Congressional District of Wisconsin in June 1915. He was Captain of the football team in 1917, and Captain of the baseball team the next year. He was graduated and commissioned Ensign on 6 June 1918, with the Class of 1919, and, by subsequent promotions, he attained the rank of Rear Admiral to date from 4 March 1944.

In 1917, as a Midshipman, he served on board USS New York, operating with the Atlantic Fleet; and after graduation in June 1918, he was transferred to the war area, and served as Ensign in USS Nicholson, a unit of the Destroyer Force based on Brest, France. He acted as an interpreter at the Surrender of the German High Seas Fleet at Firth of Forth, Scotland, on 21 November 1918.

Detached from Corry, he returned in September 1924 to the Naval Academy for a two-year tour of duty as an instructor in the Department of Seamanship. He was then assigned to the Asiatic Fleet, and as Commanding Officer and Executive Officer of USS Pope, participated in the Yangtze Patrol. In June 1929 he again returned to Annapolis, this time to attend the general line course at the Naval Postgraduate School. A year later he reported to the Naval War College, Newport, Rhode Island, where he completed the junior course in May 1931.

After duty on the Staff of the Postgraduate School, Annapolis, he served from March 1941 until May 1942 in the Office of the Chief of Naval Operations, Navy Department. He was then ordered to USS Salamonie (AO-26), and assumed command of that oiler on 25 May 1942. That vessel made North Atlantic trips twice to Reykjavik, Iceland, and to Argentia, Newfoundland, and in November 1942 she was included in a large convoy enroute to Casablanca, North Africa.  Despite intense U-boat activity, no enemy action was encountered. During the first half of 1943, the Salamonie, under Commander, Task Force 36, operated as a convoy escort.

Ordered to the US Naval Forces, Northwest African Waters, he reported on 27 June 1943, and was assigned duty as Chief of Staff to Commander EIGHTH Amphibious Force. “For exceptionally meritorious conduct preparatory to and during the assault on the Italian Mainland in the Gulf of Salerno, on September 9, 1943…” he was awarded the Legion of Merit. The citation further states:

“Exercising keen judgment and able leadership, (he) coordinated planning and operations and maintained a splendid spirit of mutual cooperation with participating services. His extraordinary ability and through professional knowledge were an inspiration to the men under his command and contributed materially to a successful invasion of the Italian Mainland.”

In November 1943, he was transferred to duty as Chief of Staff to Commander ELEVENTH Amphibious Force, and as such he participated in the Normandy Invasion on 6 June 1944. For “outstanding services” on that occasion he was awarded the Gold Star in lieu of a second Legion of Merit. The citation continues in part: “Charged with the preparation and execution of a landing on a heavily defended beach, (he) formulated the tactical plans, supervised the intensive training and operational readiness of over 2400 ships and craft of several Allied navies in conjunction with the United States Army within range of enemy action and, under the cover of night, moved the forces through mined waters to their positions in the assault area…”

On 16 October 1944, back in the United States, he reported to the Combat Information Center, Group Training Center, Little Creek, Virginia, for temporary duty under instruction. There he had additional duty in connection with fitting out USS Saint Paul. At her commissioning on 17 February 1945, he assumed command of that cruiser which soon joined the Pacific Fleet. On 20 July 1945 she became a unit of Task Force 38 of the THIRD Fleet, with 74 percent of her crew on their first sea duty. On 9 August she fired the last salvo of the war, during the bombardment of the Japanese steel city of Kamaishi, northern Honshu. Following the Japanese surrender she participated in the occupation of Japan until 8 December 1945.

He was awarded the Bronze Star Medal with Combat “V” for “meritorious achievement as Commanding Officer of USS ST. Paul, during operations… in the Western Pacific Ocean Area from July 20 to August 23, 1945. In addition to directing his ship in the bombardments of the Kamaishi Steel Works and the night bombardment of the Hamamatsu industrial area in operations with a Fast Carrier Task Force, (he) further provided direct support to the carriers against submarine and air attack during repeated and highly successful raids…”

Upon his return to the United States, he reported to the Ninth Naval District, Great Lakes, Illinois, for duty as District Intelligence Officer, and on the following 10 July, became Assistant Chief of Staff for Operations and Services to the Commandant of that District, and additionally served as Assistant Chief of Staff for Personnel. In January 1947 he was ordered to the Atlantic Fleet for duty as Commander, Cruiser Division 8, and the next 25 August he was designated Commander, Amphibious Group 2, with additional duty as Commander, Transport Squadron 2. He served in that command until February 1949.

Designated Chief of the US Naval Mission to Brazil in Rio de Janeiro, he reported on 27 May 1949, and while there, during the period ending in June 1952, he had additional duty as Senior Naval Member, Joint Brazil-United States Military Commission.