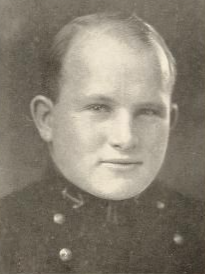 Ira Earl Hobbs, son of J.I. Hobbs of Frederick, Oklahoma, was born in Hope, Oklahoma, December 4, 1901. He attended Marlow (Oklahoma) High School, and had one year at Oklahoma University, in Norman before entering the US Naval Academy, Annapolis, Maryland, in 1921. Graduated and commissioned Ensign on June 4, 1925, he subsequently advanced through the grades to the rank of Rear Admiral to date from February 1, 1953. On June 1, 1959 he was transferred to the Retired List of the US Navy and was advanced to the rank of Vice Admiral on the basis of a combat award.

When detached from the Naval Academy in June 1925, he was assigned to the battleship Oklahoma, in which he served as a junior officer in the Navigation and Gunnery Departments, and in April 1927 was ordered to the Asiatic Fleet. After two months in the USS Nitro in transit, he joined the USS Pruitt, a unit of Division 45, Destroyer Squadron 15, and served as Chief Engineer of that destroyer. Ordered in March 1929 to the Naval Air Station, Pensacola, Florida, as a student aviator, he completed the course and was designated Naval Aviator on June 5, 1930. When detached in January 1931, he was assigned to Scouting Squadron 2, based on the carrier Saratoga, and remained with that squadron until May 1933.

Reporting to the Navy Department, Washington, DC, in June 1933, he had duty for two years in the Hydrographic Office attached to the Division of Air Research. He returned to the Fleet in June 1935, reporting aboard the USS Wright, for duty with Patrol Squadron 9, as Navigator and Engineer Officer. He served for a year (December 1936-37) as Commanding Officer of the USS Gannett, seaplane tender, and then had shore duty from January 1938 to May 1940, assigned to the Naval Aircraft Factory, Navy Yard, Philadelphia, Pennsylvania. Between June 1940 and October 1941 he commanded Observation Squadron 3, based on the USS Idaho, flagship of Battleship Division 3, Battle Force, at San Pedro, California.

Transferring to the East Coast, he served from October 1941 to September 1942 as Assistant Operations Officer on the staff of Commander Air Force, Atlantic Fleet, aboard the USS Ranger. He then assisted in fitting out the USS Chincoteague, building at the Lake Washington Shipyards in Seattle, Washington, and from April to September commanded that seaplane tender in operations with the South Pacific forces. He was awarded the Silver Star Medal “For conspicuous gallantry and intrepidity…in the Santa Cruz Islands vicinity from July 16 to 21, 1943…” during a series of eleven Japanese bomber attacks. During the eighth attack, a direct hit put her aft engines out of commission, and the forward engine room was flooded. Her hull was riddled with splinters. The citation continues:

"Skillfully maneuvering the seaplane tender, Commander Hobbs defiantly opposed repeated smashing attacks from the hostile planes. When his ship was severely damaged by fires and flooding, he coolly and tenaciously continued to fight against overwhelming odds until he eventually succeeded in saving his vessel and her personnel…”

Returning to the Navy Department in October 1943, he served in the Bureau of Ordnance until April 1945. He received the Letter of Commendation with Ribbon from the Secretary of the Navy "For outstanding service in the important assignment as Head of the Aviation Ordnance Equipment Section, Fleet Maintenance Division, Bureau of Ordnance, from 6 October 1943 to 30 April 1945. Demonstrating exceptional administrative ability, sound judgment, and great professional skill, Captain Hobbs supervised the activities of a large group of officers who performed with outstanding success the task of supplying aviation ordnance to the Fleet. His unit furnished ordnance gear sufficient to equip more than 40,000 airplanes, and helped to supply the punch that made our carrier operations in the Pacific so damaging to the enemy…”

From August 1945 until February 1946 he commaned the USS Makin Island, and then joined the staff of Commander, FOURTH Fleet as Operations Officer. In August 1946 he returned to the United States to attend Stanford University, Palo Alto, California, from which he received the Master of Arts degree in Education. On July 22, 1947 he assumed duty as Director of Enlisted Personnel, Bureau of Naval Personnel, Navy Department, and in January 1950 was detached to duty as Chief of Staff and Aide to Commander Carrier Division 5. He was so serving when the United States declared a state of hostilities existent in Korea, in which, as a member of the United Nations, this country was involved.

As Chief Planning Officer of a special planning group from August 1 to 25, 1950, he was awarded a Letter of Commendation by the Commander SEVENTH Fleet. He also was awarded the Legion of Merit and cited "For exceptionally meritorious conduct in the performance of outstanding services as Chief of Staff to Commander, Task Force 77, during operations against the enemy in the Korean theater from August 25, 1950 to February 26, 1951…”

He then took command of the USS Philippine Sea (CV 47), which he commanded until February 1952. He again served briefly in the Bureau of Naval Personnel before reporting in July 1952 as Commander Naval Air Bases, 13th Naval District, and Commanding Officer of the Naval Air Station, Seattle, Washington. On November 24, 1952 he assumed command of Carrier Division EIGHTEEN, commanding that division until April 1, 1954, when he became Chief of Staff and Aide to Commander Air Force, US Pacific Fleet.

He served as Commander Carrier Division THREE from May 19, 1955 until October 1956, when he reported as Commander Alaskan Sea Frontier with additional duty as Commandant of the SEVENTEENTH Naval District. On December 1, 1957 he became Assistant Chief of Naval Operations (Personnel), Navy Department, his last assignment prior to retirement, effective June 1, 1959.

His official address and that of his wife, the former Miss Mary Hardy of San Diego, California, is…Vice Admiral Hobbs is a member of the Army-Navy Country Club, Washington, DC, and the Phi Delta Kappa fraternity.