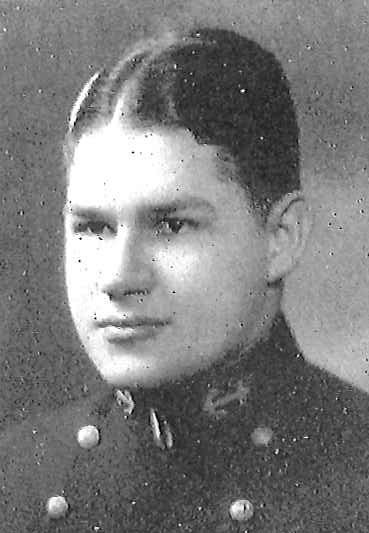 Charles Mario Charneco was born in Anasco, Puerto Rico, on January 22, 1906, son of the late Antonio and Dolores (Gonzales) Charneco. He was graduated from High School in Mayaquez, Puerto Rico, and entered the US Naval Academy, Annapolis, Maryland, on appointment from Puerto Rico, on June 16, 1925. He was graduated and commissioned Ensign in the US Navy on June 5, 1930, and through subsequent promotions attained the rank of Captain in date from May 23, 1949, having served in the temporary rank of Captain during the period November 1945 to January 1948.

When detached from the Naval Academy in June 1930, he reported to USS Oklahoma and had duty as a junior officer in gunnery and engineering aboard that battleship until May 1932. He then had destroyer duty until August 1934, having gunnery and engineering duties in USS Badger, USS Childs and the USS Whitney, successively. He attended the Naval Finance and Supply School, Navy Yard, Philadelphia, Pennsylvania, from August 1934 until June 1935. On graduation he was designated Finance and Supply Specialist and ordered to USS Relief as Disbursing Officer. That title abandoned in September 1935, he was transferred from the line to the Supply Corps, USN.

In July 1937 he reported to the Naval Supply Depot, San Diego, California. After fifteen months duty as Assistant to the Supply Office there, he was ordered to Asiatic Station, where he had duty as Supply, Commissary, and Disbursing Officer at the Receiving Station, Cavite, P.I. He returned to the United States in November 1940, and was assigned as Assistant to the Supply Officer at the Naval Air Station, Alameda, California, during the period prior to and immediately following the Japanese attack on the USFleet at Pearl Harbor, T.H.

From January until May 1943 he was attached to the Outfitting Detail of USS Bunker Hill, building at Quincy, Massachusetts. He joined that carrier as Supply Officer at her commissioning on May 25, 1943, and served in that capacity during major campaigns from Gilbert Island attack to the liberation of the Philippine Islands until October 1944. He is entitled to the Ribbon for, and a facsimile of the Presidential Unit Citation awarded the Bunker Hill “For extraordinary heroism in action against enemy Japanese forces in the air, ashore and afloat in the South, Central, Southwest and Western Pacific from November 11, 1943 to May 11, 1945…”

When detached from the Bunker Hill in October 1944, he returned to the West Coast, and after a month’s duty in the Eleventh Naval District, reported as Supply and Accounting Officer at the Naval Air Station, Miami, Florida. Transferring in March 1946, he served until August 1949 as Supply and Fiscal Officer on the Naval Air Station, Norfolk, Virginia. A month later he joined the US Naval Mission to Peru, and served as Advisor to the Paymaster General of the Peruvian Navy until March 1951.