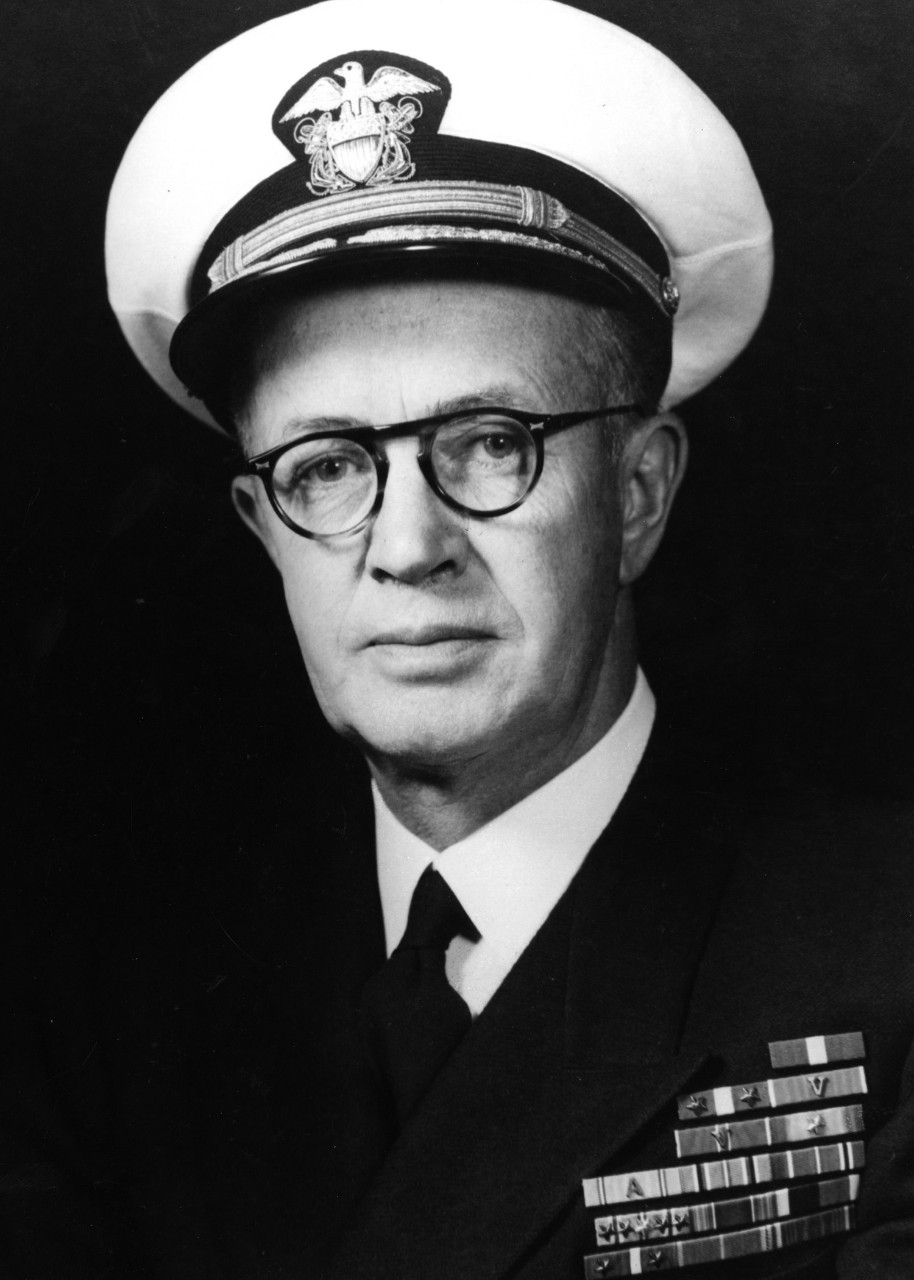 Admiral Robert Bostwick Carney, United States Navy, (Retired) was born in Vallejo, California, on 26 March 1895, the son of Lieutenant Commander Robert Emmett Carney, United States Navy, who was retired in that rank, and Mrs. Bertha V.H. (Bostwick) Carney. He attended Central High School, Philadelphia, Pennsylvania, before his appointment to the United States Naval Academy at Annapolis, Maryland, by President William Howard Taft in 1912. While a midshipman, he participated in swimming and boxing. He was graduated, with credit, and commissioned Ensign in June 1916.

Upon graduation in 1916, he joined the USS New Hampshire, serving in that Battleship until October of that year, when he joined the USS Dixie. He continued to serve in the Dixie, based at Queenstown, Ireland, after the United States entered World War I, until July 1917, when he transferred to the USS Fanning, attached to the Force commanded by Admiral Sir Lewis Bayly, Royal Navy. He was serving as her Gunnery and Torpedo Officer when the Fanning sank the German U-58 on 17 November 1917, and brought her crew into Queenstown as prisoners. Later, Admiral Carney, then a Lieutenant, was commended for his handling of the Fanning as Officer of the Deck in an encounter with a submarine off the coast of France.

Between the wars, he commanded several destroyers and a Naval Transport Service ship, served as Gunnery Officer of a cruiser, Executive Officer of a battleship and acquired staff experience in the Fleet. Ashore, he served in the Navy Department in the Division of Fleet Training and in the Shore Establishment Division of the Secretary of the Navy's office.

While in the last-named duty, he assisted in the general coordination of the Navy's small craft program, which included the design, construction, and operation of types built especially for military use (motor torpedo boats and submarine chasers), and the mobilizing of privately owned craft and their operators for use in the plan for defense. During this tour of duty, he also served as Naval Aide to His Royal Highness, the Crown Prince of Norway, during the latter's visit to the United States 27 June - 6 July 1939.

In February 1941, Admiral (then Commander) Carney was recalled from duty in the Pacific Fleet to assist in organizing, equipping, and training of a special Surface-Air Force, having as its mission the protection of shipping against submarine and air attack. This force became fully involved in convoy escort prior to the Japanese attack on Pearl Harbor. From September 1941 until April 1942, this Force, under its Commander, the late Vice Admiral Arthur L. Bristol, Jr., established the remarkable record of escorting over 2,600 ships on the ocean lanes with a loss of only six ships.

As Operations Officer and, later, Chief of Staff to Admiral Bristol, Admiral Carney (then a Captain) was awarded the Distinguished Service Medal for his contributions to anti-submarine warfare. The citation accompanying the award states, in part, "With remarkable and distinctive skill (he) prepared all operational plans preceding and during belligerent operations of the Force..."

From 15 October 1942 until July 1943, he commanded the cruiser USS Denver, and was twice decorated for engagements in the Solomon Islands campaign.

He was awarded the Legion of Merit with "V" (Combat Distinguishing Device) "for exceptionally meritorious conduct...in action against enemy Japanese forces...March 5-6 , 1943...participating in vital missions in this area of intense activity, (he) skillfully directed the carefully planned operations of his ship in various actions, including the occupations of the Russell Islands."

He earned the Bronze Star Medal with Combat "V" for "meritorious service as Commanding Officer of the USS Denver, attached to a Task Group of the THIRD Fleet, during operations against the enemy Japanese-held Islands of Kolombangara, Shortland, and Bougainville, in the Solomons area, the night of July 29, 1943. Proceeding through unfamiliar waters, (he) took advantage of adverse weather to lay a large quantity of explosive mines along the sea lanes extensively used by the enemy and, in addition delivered a smashing bombardment against Japanese shore installations on these islands..."

On 26 July 1943, he was promoted to Rear Admiral and became Chief of Staff to Admiral William F. Halsey, Jr., Commander, South Pacific Force, which included all ground, sea, and air forces in the South Pacific area.

While in this assignment, Rear Admiral Carney was awarded his second Distinguished Service Medal for contributions which he made in the field of over-all strategy and the organizing of the logistic support of the Allied Forces in the South Pacific, the citation stating, in part: "displaying sound judgment and distinctive tactical ability, (he) conceived and correlated the many offensive operations carried out in the Solomon Islands and Bismarck Archipelago Areas. Through his comprehensive knowledge of logistics and his expert planning, he enabled our Forces to exert their greatest strength against the enemy and administer a series of crushing defeats on the Japanese..."

When Admiral Halsey assumed command of the THIRD Fleet in the Central Pacific in June 1944, Rear Admiral Carney accompanied him as Chief of Staff. He took part in the Palau, Leyte, Lingayen, and Okinawa campaigns and in the attack on Formosa, in the China Sea; against the Japanese homeland and the Second battle of the Philippine Sea.

During this period, he earned the Navy Cross, the United States Navy's ranking decoration, and his third Distinguished Service Medal, the citations for these mentioning accomplishments in tactics and unfailing ability to achieve tactical surprise. These read, in part:

The Navy Cross: "In operations against enemy Japanese forces during the Battle for Leyte Gulf, from October 23 to 26, 1944...(He) rendered invaluable assistance in formulating the plans for a series of combat operations in which Task Forces of the THIRD Fleet engaged capital ships of the Japanese Fleet, waging devastating attacks on major Japanese combatant and carrier task forces in the vicinity on Mindora, the Sulu Sea, and areas northeast of Luzon and off the Central Philippines..."

The Gold Star in lieu of a Third Distinguished Service Medal: "For exceptionally meritorious service to the Government of the United States in a duty of great responsibility as Aide and Chief of Staff to the Commander THIRD Fleet, from June 15 to October 22, 1944, and from October 27, 1944 to September 19, 1945. Handling problems of immense strategic and tactical importance, (he) rendered inestimable assistance in the conception, correlation, and execution of many offensive operations against the Japanese and in carrying out the initial landing on the Japanese mainland and subsequent occupation of this territory..."

Rear Admiral Carney arranged with Japanese emissaries for the entry of the THIRD Fleet into Tokyo Bay, accepted the surrender of Yokosuka Naval Base and surrounding area from Vice Admiral Totsuka, of the Imperial Navy, and attended the surrender ceremony held in Admiral Halsey's Flagship, the Battleship USS Missouri.

After the war, he was promoted to Vice Admiral in 1946 and until early February 1950, served as Deputy Chief of Naval Operations (Logistics) with over-all military cognizance of Fleet support, shore establishment, and procurement and supply matters. During this period, he sponsored and planned a Navy-wide logistical education program and integrated the Navy's logistic planning and performance system.

He also was the Navy member of a special three-man committee appointed to solve the complex problem of dividing the National Defense appropriations and developing a budget structure applicable to all Services.

After leaving the Navy Department, Vice Admiral Carney, on 6 March 1950, assumed command of the SECOND Fleet operating on the East Coast of the United States.

On 2 October 1950, he was advanced in rank to Admiral and on 1 November 1950, became Commander in Chief, United States Naval Forces, Eastern Atlantic and Mediterranean, with Headquarters at London, England. 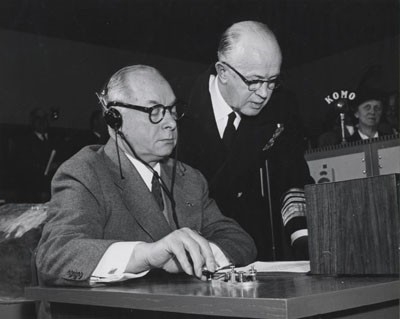 Brigadier General David Sarnoff, Chairman of the Board, Radio Corporation of America and Admiral Robert B. Carney, Chief of Naval Operations - transmit the first operational message from the world's most powerful radio transmitter, at Jim Creek, Washington, 18 November 19153. The 1,200,000 watt radio was built by RCA for the navy. Gen. Sarnoff tapped out the message as dictated by Adm. Carney.

On 13 May 1953, President Eisenhower announced his selection of Admiral Carney as the next Chief of Naval Operations of the United States Navy.

On returning to the United States in July 1953, Admiral Carney participated in a strategic appraisal study with the other newly-designated members of the Joint Chiefs of Staff. He was sworn in as Chief of Naval Operations on the 17th of August 1953, and served in that capacity until the 17th of August 1955. He also was a member of the Joint Chiefs of Staff during this period.

On completion of his appointment as Chief of Naval Operations, Admiral Carney retired from active service. On the occasion of his retirement, President Eisenhower presented Admiral Carney with a citation and Gold Star in lieu of a Fourth Distinguished Service Medal for services rendered as Chief of Naval Operations and as former Commander of the NATO Forces in Southern Europe.

Admiral Carney served twice as President of the United States Naval Institute. He was an Honorary Life Member of the National Security Industrial Association, and was a Gold Medal Life Member of the American Ordnance Association. He held a Bachelor of Science Degree and LLD (Honorary). Over the years, Admiral Carney's various assignments, coupled with his personal interest in Industrial participation in the Defense effort, resulting in close contact with Industry as an indispensable partner in the Military Logistical and Technical effort.

He served on the Military Advisory Committee of the Gaither Study Group.