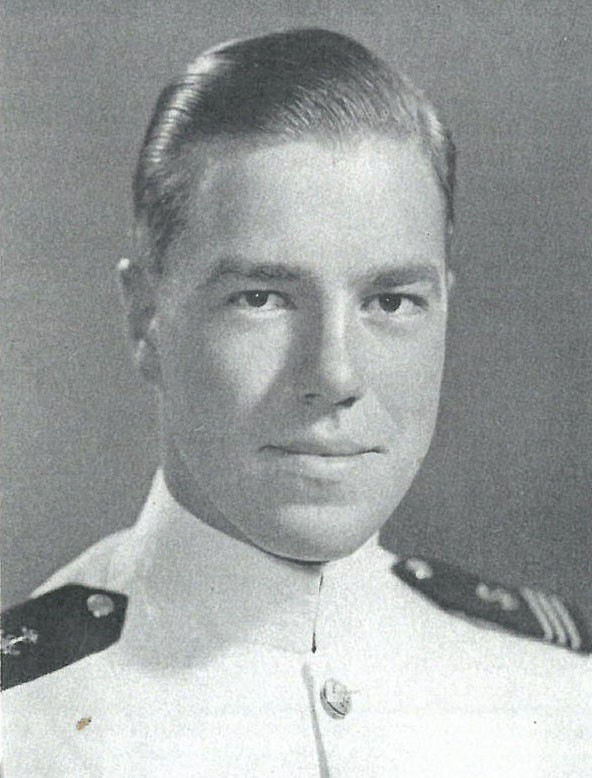 After graduation  f rom  the  Naval  Academy in  June 1942,  he  reported  to the  Submarine  School,  New  London, Connecticut, for submarine instruction, and was graduated and detached in September of that year. In  October he joined USS Jack  (SS 259), in which during the remaining World War  II period he served in every capacity except that of  Commanding Officer, participating in eight War Patrols are Torepedo Data Computer Operator. Next he joined USS Haddo, and as that submarine 's Executive Officer from July to November 1945, he took part in ne War Patrol of that vessel and was on board at Tokyo, Japan, for the Japanese Surrender ceremonies, September 2, 1945 (EST).

For heroic service during World War  II, Conmmnder Calvert was awarded the Silver Star Medal with Gold Star in lieu of a second award; the Bronze Star Medal with Gold Star; a letter of Commendation, with Ribbon and Combat "V", and is entitled to the Ribbon for and a facsimile of the Presidential Unit Citation awarded the USS Jack for her first, Third and Fifth War Patrols.  Citations follow, in part:

Silver Star Medal:  "...Lieutenant Calvert, by his skill and  proficiency, rendered invaluable assistance to his superior officer throughout numerous strikes which resulted in the destruction of a large amount of Japanese shipping..."

Gold Star in lieu of the Second Silver Star Medal:  "...( He) rendered invaluable service (from June 4 to July 14, 1944) in launching attacks against the enemy, thereby materially contributing to the sinking of thousands of tons of enemy shipping and the successful evasion of strong enemy countermeasures..."

Bronze Star Medal:  "For meterorious achievement while serving as TDC Operator, attached to a United States Submarine during a War Patrol in enemy Japanese-controlled waters...Lieutenant (jg) Calvert, despite strong enemy opposition, rendered invaluable assistance to his Commanding Officer in the sinking of a considerable amount of enemy tonnage..."

Gold Star in lieu of Second Bronze Star Medal:  "For heroic service as TDC Operator and as Gunnery Officer of the USS Jack during her Fourth War Patrol in enemy-controlled waters from April 5 to May 10, 1944..."

Letter of Commendation (from CINCPAC): "...As Assistant Approach Officer and TDC Operator, his thorough knowledge of attack problems, keen understanding of fire control equipment and proficiency in operating the Computer, were of valuable assistance to his Commanding Officer while conducting attacks which resulted in sinking or damaging more than 6,000 tons enemy shipping..."

Returning to New London in December 1945, he served as TDC Instructor at tbe Submarine School until March 1948, and during that time wrote a basic TDC book, OP 1442A.  For two years he was Executive Officer of USS Charr (SS-328), which won the Battle Ef'ficiency Pennant for 1949 and 1950, and the Marjorie Sterett Prize in 1950. He next had a tour of duty in the Bureau of Naval Personnel, Navy Department, Washington, DC, as Assistant Submarine Detail Officer, then placed in commission, on August 19, 1952, USS Harder ( SS-568), and served as her Executive Officer until January 1953.

Vice Admiral Calvert is entitled to wear the Navy Unit Commendation Ribbon with Bronze Star in lieu of a second award, being Commanding Officer of the Skate when she was twice cited for outstanding operations in the Arctic. He was personally awarded the Legion of Merit and Gold Stars in lieu of a Second and Third Legion of Merit.

Gold Star in lieu of the Second Legion of Merit : "For...outstanding services as Commanding Officer of the USS Skate,...during her second Arctic cruise 4 March to 6 April 1959 and during the meticulous preparations therefor..."

Gold Star in lieu of the Third  Legion of  Merit:  ". . .Exerising superior planning an organizational ability, Commander Calvert succeeded in carrying out a hazardous and complex mission of great importance to the United States..."

In September 1959 he was detached from command of the Skate to duty as Commander Submarine Division ONE HUNDRED TWO.  After two years in that command he reported to the National War College, Washington, DC, for instruction. In  July  1962 he  reported for duty in the Officer of the Chief of Naval Operations, Navy Department, Washington, DC, where he served as Head of the Europe and NATO Branch of the Politico-Military Policy Division until detached in July 1964 for duty at the Armed Forces Staff College, Norfolk, Virginia.  He was selected for Rear Admiral in the spring of 1965, assumed the rank and title on July 2 of that year, and in August 1965 became Director of the Politico-Military Policy Division, Office of the Chief of Naval Operations.  He was awarded a Gold Star in lieu of the Fourth Legion of Merit and cited in part as follows:

"...As an advisor to the Secretary of the Navy and the Chief of Naval Operations on  international politico-military matters, Rear Admiral Calvert, through his marked professional competence and inspiring leadership, was responsible in large measure for the outstanding performance of trhe Politico-Military Policy Division..."

In June 1967 he assumed command of Cruiser Destroyer Flotilla EIGHT and in July 1968 became Superintendent of the US Naval Academy, Annapolis, Maryland, with additional duty during July and August 1968 as Commandant of the Naval District, Washington, DC.  "For exceptionally meritorious service...from July 1968 to June 1972..." he wa awarded the Distinguished Service Medal.  The citation further states in part:  "...By his inspiring and dedicated efforts toward providing the best education and training possible for the Brigade of Midshipmen, Vice Admiral Calvert contributed immeasurable in providing the Navy and Marine Corps with superior officers..."

In July 1972 he assumed command  of  the FIRST Fleet and "for exceptionally meritorious service..." in  that capacity was awarded a Gold Star in lieu of  the Second Distinguished Service Medal.  The citation further states in part:  "...(his) in spiring leadership and extensive knowledge have been instrumental in the orderly planning for amalgamation of FIRST Fleet and Antisubmarine Warfare Force Pacific to form the new THIRD Fleet command,,,"  On February 1, 1973 he was transferred to the Retired List of the US Navy.