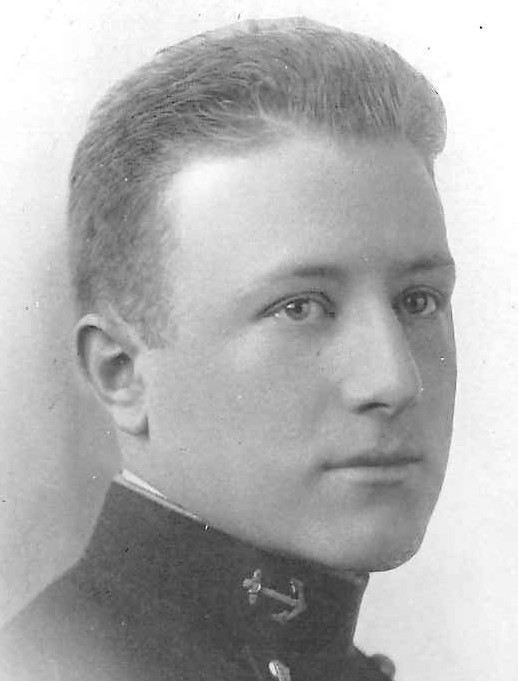 Richard Waller Bates was born in San Francisco, California, on January 16, 1892, and was appointed to the US Naval Academy from the Third District of California in 1911.  Graduated and commissioned Ensign on June 5, 1915, he was advanced to Lieutenant (both grades) during World War I.  Commissioned in those ranks in 1920, he subsequently attained the rank of Captain on July 1, 1941.  He was appointed Commodore for temporary service on April 30, 1943, and in January 1947 reverted to the rank of Captain.  He was transferred to the Retired List of the Navy on April 30th, 1949, for physical disability incident to war, and was promoted to the rank of Rear Admiral on May 1, 1949.

After graduation from the Naval Academy in June 1915, he served consecutively in the battleship USS Ohio and the armored cruiser USS Maryland until January 1916, when he joined the USS Yorktown.  He served aboard that gunboat while she patrolled the West Coast of Mexico and Central American during the early months of World War I.  Transferred to the USS Cincinnati, which operated off the East Coast of South America, he was serving as Executive Officer in that cruiser when hostilities ceased, and remained aboard until April 1919.  During a portion of this time he served as a Gunnery Instructor in the Cuban Navy, and was attached to the Cuban Gunboat CUBA.

Following duty in connection with fitting out the USS Sproston at the Union Iron Works, San Francisco, California, he served aboard that destroyer as Executive Officer from her commissioning, July 12, 1919, until June 1920.  He was selected for post graduate instruction at this time, and took his refresher training at the Postgraduate School, Annapolis, Maryland, during 1920-21.  He was selected to specialize in Electric Propulsion of Ships at Columbia University, New York City, receiving the degree of Master of Science from the latter in June 1922.  Continuing instruction at the General Electric Company’s Plant at Schenectady, New York, and at the Westinghouse Electric Company’s Plant at East Pittsburg, Pennsylvania, until the fall of that year, he joined the new battleship USS Maryland in October 1922, when he served as electrical officer for the next three years.  From November 1925 until June 1927, he was on the staff of the Postgraduate School, Annapolis, Maryland, where he was the Assistant for Engineering.

As Engineer Officer of the light cruiser USS Richmond, he participated in the Yangtze River operation from July 1927 until April 1928.  The Richmond was transferred to the Atlantic Fleet.  He remained on board her until June 1930.  For the next two years he was Officer-in-Charge, Branch Hydrographic Office, Honolulu, T.H., commanded the old Naval Station there, was Aide to the Commandant of the FOURTEENTH Naval District, and was Permanent Senior Patrol Officer.  During this time the celebrated “Massie case” occurred.  Returning to sea duty, he had command of the destroyer USS Buchanan from June 1932 until May 1933, when he was transferred to the oil tanker RAMAPO, as temporary commanding officer, and took her to China.  In July he became her Executive Officer, which assignment he held until March 23, 1934, when he assume command of the destroyer USS Long.  On being relieved of that command in June 1935, he was ordered to shore duty in the Navy Department, Washington, DC.

From June 1938 until June 1940, he commanded the USS Clark, flagship of Destroyer Squadron THREE, Battle Force.  He was then selected to take the Senior Course at the Naval War College, Newport, Rhode Island.  After completing this course in May 1941, he was selected to serve on the staff of that College where he became Head of the Department of Strategy.  He remained on duty at the War College until July 1943.

On July 19, 1943, he assumed command of the heavy cruiser USS Minneapolis, which had previously seen action and had been severely damaged during the Battle of Tassafaronga which had occurred in the Solomon Islands in November 1942.  Completing repairs, that cruiser returned to the Pacific area, and under his command, engaged in the bombardment of enemy-held Wake Island in October 1943.  In November 1943, she participated in the invasion of the Gilbert Islands.  In succeeding months, she took part until April 1, 1944, in many further actions in the Central Pacific, sinking the Japanese light cruiser KATORI in daylight action off Truk.

He was awarded the Legion of Merit with combat distinguishing device “V,” for “exceptionally meritorious conduct…as Commanding Officer of the USS Minneapolis, during action against enemy Japanese forces in the Pacific War Area from July 19, 1943 to April 7, 1944.  Serving with distinction during this critical period, (he) rendered valiant assistance in the assault and capture of the Kwajalein Group; the bombardment of Taroa; and the assault on Truk, Saipan, Tinian, Yap, Woleai and Palau Islands.  Maintaining his ship in a constant state of combat readiness, throughout the arduous period, he contributed essentially to the effectiveness of these hazardous engagements and to the subsequent success of our forces…”

Relieved of command of the Minneapolis on May 20, 1944, he reported to the Commander in Chief, Pacific Fleet, for duty.  In this assignment in a period of about three months he revised the principal fleet tactical publication.  In September he was loaned to Commander Cruiser Division FOUR to serve as Chief of Staff of the Bombardment, Fire Support and Associated Groups of the SEVENTH Fleet in the operations for the recapture of the Philippine Islands.  Here in the Battle for Leyte Gulf he was awarded the Navy Cross for “extraordinary heroism as Chief of Staff to a Flag Officer in Command of the Allied Forces in the Cruiser Division FOUR, in action against major units of the Japanese Fleet during the Battle of Surigao Strait, Philippine Islands, in the early hours of October 25, 1944.  Displaying wise judgment and professional skill in preparing all plans and in keeping the officer in tactical command informed relative to the current tactical situation during operations, (he) gave encouragement to staff and other personnel, there by contributing directly to the success of this difficult operations…”  In this night battle the Japanese battleships Fuso and Yamashiro were sunk.  As a result of his activities in this battle he was recommended by the Commander, Bombardment, Fire Support and Associated Group for immediate promotion to Rear Admiral for demonstrated superiority in action against the enemy.

On December 8, 1944, he was assigned duty as Chief of Staff and Aide to Commander Battleship Division TWO, and as such he took part in the LINGAYEN-LUZON, Philippine Island Operation in January 1945, and in the OKINAWA Operation, March-May 1945; and for services in that assignment was awarded Gold Stars in lieu of the second and third Legion of Merit, with Combat “V” and was once again recommended for promotion to Rear Admiral.  His citations follow in part:

Gold Star in lieu of the Second Legion of Merit: “For exceptional meritorious conduct…as Chief of Staff to Commander Bombardment Fire Support and Associated Groups during operations against enemy Japanese forces for the capture of and landing on Leyte from October 16 to 29, 1944, and for the capture of Lingayen Gulf and landing on Luzon from January 6 to 22, 1945.  Serving with distinction, (he) made strategic and tactical estimates of the constantly changing situation and rendered invaluable assistance in guiding the planning and execution of plans for operations in those areas…”

Gold Star in lieu of third Legion of Merit:  “For exceptionally meritorious conduct in performance of outstanding service in continuous offensive action against the enemy off Okinawa Jima, Ryukyu Islands, from 25 March to 5 May 1945, as Chief of Staff to a Task Force Commander.  By his knowledge, experience, advice and devotion to duty he materially contributed to the successful accomplishment of the mission of the Task Force in the face of determined enemy opposition…”

On May 21, 1945, he assumed command of Motor Torpedo Boat Squadrons Pacific Fleet with the temporary rank of Commodore.  He remained in that command until the dissolution of that command in December 1945, when he became Chief of Staff to Commander Philippine Sea Frontier, in which capacity he served for six months, at the end of which time he was returned to the United States for physical disability.  He was transferred to the Naval War College for duty on the staff in September 1946 and served there until his retirement for physical disability on May 1, 1949.  Since July 1949 he has been on active duty at the Naval War College, Newport, Rhode Island, as a Commodore, where he is now engaged in preparing critical analyses of the major of Naval Battles of World War II.