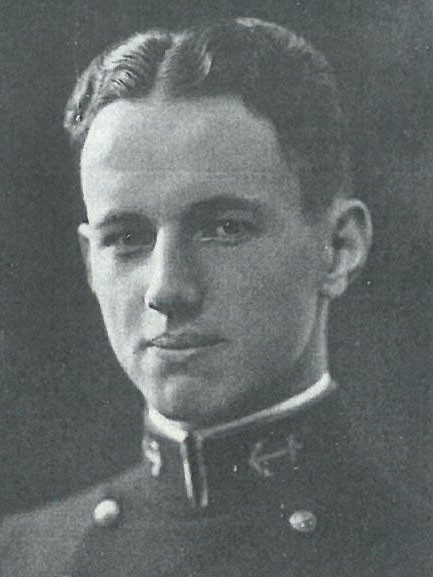 Robert Lord Campbell was born on September 12,1903, at Imlay City, Michigan, son of Robert L. and Mrs. Grace (Lord) Campbell. He attended public schools at Kalamozoo, Michigan, before his appointment to the US Naval Academy, Annapolis, Maryland, from the Third Congressional District of Michigan in 1920. Graduated and commissioned Ensign on June 4,1924, he advanced to the rank of Rear Admiral, to date from July 1, 1951.

Following graduation from the Naval Academy in 1924, he was assigned to the battlehip USS Pennsylvania until April 1928, when he was transferred to the destroyer USS Robert Smith. Detached from the latter vessel in January 1929, he had flight training at the Naval Air Station, San Diego, California, and further instruction at the Naval Air Station, Pensacola, Florida. He was next assigned to the destroyer USS Preble, and in June 1931 returned to Annapolis for instruction in the General Line Course at the Postgraduate school.

He attended the course at the Naval War College, Newport, Rhode Island, from June 1932 until May 1933, after which he reported as Aide and Flag Lieutenant on the staff of Commander Cruiser Division THREE. He assumed command of the coastal minesweeper USS Rail in April 1935, and in June 1936 was detached with orders to command the auxiliary ship USS Sequoia. He remained in that command until September 1937 when he was ordered to London, England, to serve as Assistant Naval Attache.

Upon his return to the United States in October 1939, he had duty in connection with fitting out the destroyer USS Trippe at the Navy Yard, Boston, Massachusetts, and assumed command at her commissioning November 1, 1939. The Trippe was assigned to Neutrality Patrol and escort of convoy duties in the Atlantic during the period prior to and immediately following the US entry into World War II.

In June 1942 he was detached and ordered to duty in connection with fitting out the battlehip USS Alabama. Upon her commissioning, August 16, 1942, he reported for duty as Navigator, serving as such during operations in the North Atlantic and North Sea until August 1943. In that month the Alabama proceeded to the Pacific, and as her Executive Officer during that period he participated in the Gilbert Islands and Marshall Islands campaigns as part of Task Force 58.  Detached from the Alabama in March 1944, he returned to the US for duty on the staff of the Naval War College from April 1944 until June 1945.

Assuming command of Destroyer Squadron 22 in June 1945 he had additional duty as Commander Destroyer Division 43. "For meritorious service ...during minesweeping operations in the Yangtze River, its approaches and the Chusan Archipelago from September 7 to December 12, 1945..." he was awarded the Bronze Star Medal which further commends him for "contributing materially to the prompt and efficient removal of mines and other hazards to navigation and insuring safe passage of Naval and merchant ships through these waters."

Between January and August 1946 he commanded Destroyer Squadron FIVE, and Destroyer Division 51. He then returned to the US, for instruction.. at the National War College, Washington, DC, and upon completion of the course in June 1947, was ordered to duty in the Office of the Assistant Chief of Naval Operations, Navy Department, Washington, DC. He served in the Strategic Plans Division until January 1949 when he took command of Destroyer Flotilla ONE.

In January  1950 he reported to the Office of the Chief of Naval Operations for duty on the staff of Vice Admiral F. S. Low, USN, in connection with a comprehensive survey of the US, Navy undersea warfare effort. Upon completion of this survey four months later, he was designated Chief of Staff to Commander Sixth Fleet. On August 20, 1951 he was assigned special duty in Europe as the senior naval member of the Joint Military Survey Team which made the first inspection of base sites later developed in Spain with US Aid. Upon his return to the US in November 1951 he became Deputy Director of the Joint Staff for Logistics, Joint Chiefs of Staff, Washington, DC.

In December 1953 he reported as Commander Amphibious Group FOUR and became Commander Naval Base, Los Angeles, California in November 1955. He assumed the duties of Commander Service Force, US Pacific Fleet at his Pearl Harbor, Hawaii headquarters May 10, 1958. There he commanded more than 100 supply and auxiliary ships which transport the "beans, bullets, bullets and black oil" to Navy fighting ships and stations throughout the Pacific Ocean area.

He assumed the tri-command of Commander Hawaiian Sea Frontier, Commandant 14th Naval District, and Commander US Naval Base Pearl Harbor on March 23,1961. The first job centered largely on coordinating searches and rescues of military ships and planes in distress within a 10-million­ square-mile portion of the Central Pacific Ocean. As Commandant of the 14th Naval District he controlled all Navy and Marine Corps air stations and other installations on Midway, Kwajalein and throughout the Hawaiian Islands, and was the representative of the Secretary of the Navy and the Chief of Naval Operations in the Hawaiian area. His "third hat" was the command and coordination of the many facilities of the Pearl Harbor Naval Base complex, which includes the Naval Shipyard, Naval Supply Center; Submarine Base, and others.

In January l962 he reported as Deputy Chief of Staff, Joint Staff, United States European Command. "For exceptionally meritorious conduct..." in, that capacity from January 1962 to October 1964, he was awarded the Legion of Merit. The citation further states in part:

During this period, Rear Admiral Campbell exercised a high degree of leadership, professional skill, and administrative ability in planning, organizing and coordinating many of the diverse activities of the United States European Command. Under his superb guidance, the joint staff achieved unity of effort and effective coordination in the conduct of various studies of major importance to the command. Through his supervision and improvement of the command inspection program for MAAGs/Missions, and by his cordial and cooperative relationships with high military and civilian officials of the host countries, he has contributed immeasurably to the success of the Military Assistance Program in those countries..."

On October 1, 1964 he was transferred to the retired List of the US Navy.