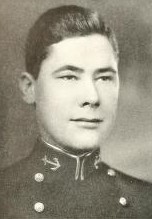 Earnest Goodrich Campbell was born in Portland, Oregon, on May 28, 1911, son of George Campbell and the late Mrs. Amy Goodrich Campbell. He attended Lincoln High School in Los Angeles, California, and enlisted in the US Navy in June 1928. He studied at the Naval Academy Preparatory School, Naval Training Station, San Diego, California, and was honorably discharged to enter the US Naval Academy, Annapolis, Maryland, on June 29, 1929. Completed the course with the Class of 1935-A, he was graduated and commissioned Ensign in the Supply Corps on June 1, 1933.

On July 15, 1935, he requested to be returned to the Line of the Navy, pursuant to the Line Personnel Bill, passed by Congress on June 25, 1935 primarily to permit Line officers to transfer to the Supply Corps. His request was approved by the Navy Department in October 1935. He was relieved of his Supply Corps duties in November, and started preforming Line duties in December 1935. On February 5, 1936 he was appointed an Ensign in the Navy to rank from June 1, 1933. As far as is known, he is the only officer who has ever taken advantage of this Law to transfer from the Supply Corps to the Line of the Navy.

On completion of his two years duty at the Naval Academy, he was ordered to a two weeks course of instruction at the West Coast Sound School, San Diego, and then to the USS Perkins to relieve as commanding officer. One day after he reported aboard, and before he had taken command, the Perkins was sunk off New Guinea. On December 13, 1943, after being rescued and returned to Milne Bay, New Guinea, he took command of the USS Mahan. He remained in command until the Mahan was sunk in December 7, 1944, by the first of the multi-kamikaze attacks. The Mahan at the time of her loss was acting as a radar picket vessel in support of the landing of the 77th Division, US Army, behind the Japanese lines at Ormoc Bay, Leyte, Philippine Islands.

He received a Letter of Commendation with Combat “V,” from the Commander in Chief, Pacific Fleet, for “excellent service in the line of his profession while serving as Commanding Officer of the USS Mahan during participation in the bombardment an assault landings at Arawe and Cape Gloucester, New Britain, on December 26, 1943…” He was commended for entering the reefs and exploring the channel prior to the entry of the landings craft, and for “bombing shore positions in support of the landings while in dangerous proximity to enemy shore batteries.”

He was also awarded the Silver Star Medal “For conspicuous gallantry and intrepidity as Commanding Officer of the USS Mahan, in action against enemy Japanese forces in Ormoc Bay, Leyte, Philippine Islands, December 7, 1944…” The citation continues in part: “During the shore bombardment and fire support of our troops (he) contributed materially to the success of his vessel in screening the assault area and in performing fighter director duties. Later when his vessel was attacked almost simultaneously by nine enemy bombers and fighters, he directed the anti-aircraft defense of his ship and succeeded in destroying three enemy planes and damaging several others. Although the Mahan was severely damaged when three hostile aircraft crashed her, he worked tirelessly to save his vessel, giving the order to abandon ship only after the magazines began to explore…”

He returned to the United States in December 144, and after brief temporary duty in the Bureau of Naval Personnel, he had instruction in February and March 1945 at the Fleet Sonar School, Key West, Florida, and the Naval Training Center, Norfolk, Virginia. He then fitted out the USS Leary, and assumed command throughout the last few months of the war, while the Leary, converted to a radar picket after her shakedown, trained in the Atlantic. After the Japanese surrender, the Leary was ordered to duty in the Pacific in connection with occupation of the Japanese home islands.

The Leary left for Japan after participating in the Presidential Review in New York Harbor of Navy Day 1945. She arrived in Japan in November, and in April 1946 was reassigned to Task Force 77, operating in the Western Pacific. In July 1946 the Leary returned to Pearl Harbor, where, on July 17, he was detached and returned to the United States for a year of instruction at the Industrial College of the Armed Forces, Washington, DC. He remained at the Industrial College for additional years as a member of the faculty, first working in the field of manpower mobilization, and then touring the United States as a member of an Industrial College team lecturing on problems of economic mobilization.

In June 1949 he was detached from the Industrial College for assignment to the Staff of Commander, US Naval Force, Germany, as Logistics Officer. He was detached from his duty in August 1952 and now commands Destroyers Division 322.