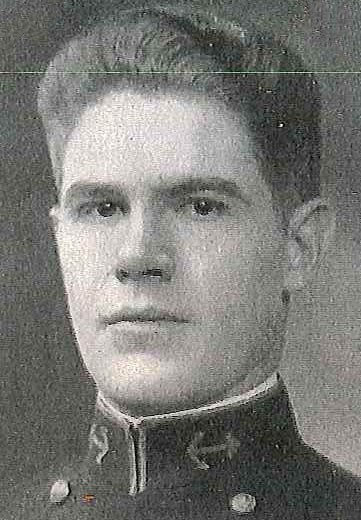 Joseph Edward Flynn was born in Long Island City, New York, on November 28, 1907, son of Michael J. and Elizabeth Callan Flynn. He attended Bryant High School in Long Island City, and Columbia University, New York (1923-1925), after which he entered the US Naval Academy, Annapolis, Maryland, on June 14, 1927. Graduated and commissioned Ensign on June 4, 1931, he subsequently advanced in rank, attaining that of Captain, with date of rank March 1, 1950.

After graduation from the Naval Academy in June 1931, he was assigned to USS Chester, in which he had junior officer duties from September of that year until June 1933. For a year thereafter he served as Communications Watch Officer on the Staff of Commander of Technology, Cambridge, Massachusetts, as a student in Naval Construction, and three years later was graduated with the degree of Master of Science. Having been appointed Assistant Naval Constructor in 1936, his designation was changed to Line (Engineering Duty Officer) in 1940, following three years’ service in the Planning and Production Divisions of the New York Navy Yard.

Detached in October 1940, he reported the next month to the Mare Island, California Navy Yard, where he served in Planning (New Construction Planning Superintendent) until May 1943. During the eighteen months to follow, he was attached to the Long Beach California, Naval Shipyard, his duty in Production, as Repair Superintendent and later Shop Superintendent. In January 1945 he joined the Staff of Commander Service Force, Pacific, as Staff Maintenance Officer, and continued service in that capacity at Ulithi and at Leyte Gulf throughout the remaining months of World War II and during the Occupation of Korean in 1945 and at Shanghai in 1946.

Detached from the staff of Commander Service Squadron Ten in August 1946, he reported two months later to the San Francisco Naval Shipyard. There he again served in Planning and Production, as Repair Superintendent and Shop Superintendent. That tour of duty ending in May 1950, he reported in July to the Navy Department, Washington, DC, for duty in the Bureau of Ships. There, among his various assignments, he was placed in charge of the salvage of USS Erie at Willemstad, Curacao, Netherlands West Indies.

He received a Letter of Commendation, with Ribbon, from the Secretary of the Navy, as follows: “For o outstanding service while acting as Representative of the Bureau of Ships as Officer in Charge of the salvage of the USS Erie in Willemstad Harbor, Curacao, Netherlands West Indies, during the period 1 February to 16 December 1952. Charged with the responsibility of directing the removal of the submerged hulk of the Erie in order to eliminate an obstruction to further expansion of the harbor, Captain Flynn carried out this complex task with exceptional resourcefulness and ingenuity and was eminently successful in overcoming the difficulties, imposed in raising a ship sunk by enemy torpedo action some ten years previously and containing an unknown quantity of ammunition and depth charges. Although lacking the assistance of a US Naval Establishment in the area, he ably negotiated contractural agreements and the procurement of materials vitally necessary to the success of the assignment and efficiently handled all other phases involving logistic support. . .”

Under orders of November 19, 1953, he was detached from the Bureau of Ships, Navy Department, and reported for duty, in January 1954, at the Boston Naval Shipyard, Boston, Massachusetts. He served as Planning Officer until July of that year, when he was reassigned as Production Officer.