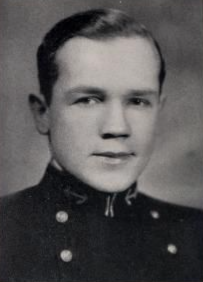 The following biography is an electronic version of an item held by the Navy Department Library in our Rare Book Room.  Aside from minor technical corrections, this electronic transcription is a faithful reproduction of the original paper item.  Those wishing to see a pdf version of this item can download it here [165KB].

Kenneth Pearle Letts was born in Elsie, Michigan, on December 12, 1908, son of Edwin George Letts and Mrs. Pearl Schenck Letts, both now deceased. He attended Flushing High School, Flushing, Michigan, and entered the US Naval Academy, Annapolis, Maryland, from the US Navy as Midshipmen at large, after two years enlisted service, on June 28, 1928. He was graduated and commissioned Ensign in the US Navy on June 2, 1932, and subsequently advanced to the rank of Captain, to date from July 1, 1951.

After graduation from the Naval Academy in June 1932, he was assigned to USS Nevada, and served as a junior division officer until April 1934. He was then transferred to USS Boggs, for eight months' duty as Communications Officer. He was a student naval aviator from January to July 1935, after which he joined USS Roper. He served first as Communications Officer and from Feb­ruary 1937 until July 1939 also had duty as Engineering Officer.

In August 1939 he returned to Annapolis for instruction in engineering at the Postgraduate School, but before completion of the course he was detached, due to the National Emergency, for duty as Engineering Officer of USS Fox from September 1939 until July 1940. He then returned to the Naval Academy as an instructor in the Department of Seamanship and Navigation, and a year later was ordered to USS Ellyson (DD 454). He served on board that destroyer from her commissioning, in November 1941, until March 1943, during which period the ELLYSON participated in the Morocco Invasion at Casablanca.

He assumed command of USS Forrest (DD 461), on March 12, 1943. Under his command that destroyer escort vessel operated with the British Home Fleet at Scapa Flow, June to November 1943, and participated in the Normandy operations in June 1944 and the In­vasion of Southern France in August of that year. He was awarded the Silver Star Medal “For conspicuous gallantry and intrepidity as Commanding Officer of the USS FORREST during operations against enemy forces in the European war Theater on June 24, 1944…”  The citation further states:

“When the minesweeping flotilla he was escorting was taken under heavy and accurate gunfire from heavy caliber guns of shore batteries, Commander Letts laid down an effective smoke screen in shore of the formation, enabling the minesweepers to slip their sweeps and return undamaged.  By his skill and initiative, he contributed materially to the success of the mission…”

He was also awarded the Bronze Star Medal with Combat "V,” for “meritorious achievement (in that command) prior to and during the amphibious invasion of Southern France, in August 1944…”, the citation continuing: “Prior to the initial landings, he led the FORREST through dangerous and restricted waters close to known enemy minefields and within easy range of hostile shore artillery to conduct vital spotting missions for Allied capital ships and cruisers. On several occasions he delivered concentrated and ac­curate gunfire against targets of opportunity. (He) was largely responsible for the successful pre-assault bombardments of the FORREST, thereby contributing materially to the effective establish­ment of the Allied beachheads and to the over-all success of the invasion…”

Detached from command of the FORREST on November 11, 1944, he returned to the United States, and was later ordered to the Bethle­hem Steel Company’s plant in San Pedro, California, to fit out USS Bristol (DD 857). He assumed command of that destroyer upon her commissioning on March 17, 1945, and as her commanding Officer participated in Third Fleet operations against Japan in July and August 1945, just prior to the cessation of hostilities. In April 1947 he was detached with orders to the Navy Department, Washing­ton, DC, for a tour of duty in the Bureau of Naval Personnel. There he served first as Director, Training Aids Division, and from March 1948 to July 1950 as Assistant Director, Standards and Curriculum Branch.

He next had duty afloat from September 1950 to December 1951 as Executive Officer of USS Toledo (CA 133). He received a Letter of Commendation with Ribbon and Combat “V,” for “distinguishing himself by exceptionally meritorious service as Executive Officer USS Toledo from April 1951 to November 1951, while engaged in action against the enemy in Korea…” which states that he “greatly contributed to the combat readiness of his ship in organizing and maintaining the ship and its personnel in a high state of efficiency and morale during operations in which the TOLEDO in­flicted heavy damage on the enemy…”

In January 1952 he was designated Commanding Officer of the Recruit Training Command at the US Naval Training Center, Great Lakes, Illinois, where he remained until October 1954. For a year thereafter he commanded USS Diamondhead (AE 19), an auxiliary­ ammunition-ship, and in December 1954 began another tour of shore duty as Commanding Officer, Service School Command, at the US Naval Training Center, Bainbridge, Maryland, his current assignment.