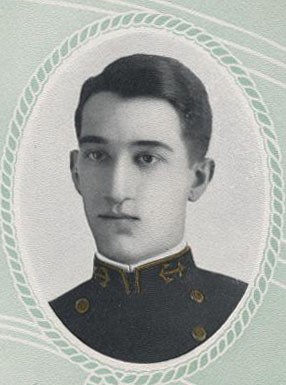 Eugene Thompson Oates was born in Charlotte, North Carolina, on 11 September 1888, son of the late James Monroe and Nora Thompson Oates. He attended Charlotte Military Institute, and on 3 September 1907, entered the US Naval Academy, Annapolis, Maryland, on appointment from North Carolina. He was graduated on 2 June 1911, and served first at sea (two years' sea duty then required by law before commissioning), being commissioned Ensign on 12 March 1912, when the law was changed. He subsequently advanced in rank, attaining that of Captain, to date from 1 August 1939, and was transferred to the Retired List of the US Navy on 1 January 1947.

Assigned first to the USS Colorado, he was a member of the Pacific Fleet Landing Force from that armored cruiser during the Nicaraguan Campaign in 1912. The next five years were spent in the old "White Fleet" cruiser USS Raleigh, and the protected cruisers USS St. Louis and USS Milwaukee, of the Pacific Fleet, on the west coast of Mexico and Central America, during Revolutions in those countries. He was Engineering Officer of the Milwaukee when that vessel was wrecked and lost off the coast of Eureka, California, on 13 January 1917.

During the early period of World War I he served as Engineer Officer of the 450-ton coal burning destroyer USS Whipple, stationed at Panama, the Azores, and Brest, France. In 1918 he commanded the yacht Remlick and the destroyer Stewart, based at Brest, and engaged in coastal convoy duties. He was awarded the Navy Cross, with citation as follows:

"For distinguished service in the line of his profession as Commanding Officer, USS Stewart, engaged in the important, exacting and hazardous duty of patrolling the waters infested with enemy submarines and mines, in escorting and protecting vitally important convoys of troops and supplies through these waters, and in offensive and defensive action, vigorously and unremittingly prosecuted, against all forms of enemy naval activity."

After the war he commanded the destroyers Bush and MacKenzie, and was engineer officer of the USS Ohio. From October 1919 until June 1921 he was Officer in Charge of the Navy Recruiting Station, St. Louis, Missouri. He commanded the USS John D. Edwards from September 1921 until January 1922, after which, for eighteen months, he was Squadron Engineer and Senior Aide of the Destroyer Squadron operating with the Asiatic Fleet, and for thirteen months in 1923-1924, was in command of the USS Monocacy, a river gun-boat operating on the Upper Yangtze River, in China.

Retuning to the United States in September 1924, he had a tour of duty in the Bureau of Engineering, Navy Department, then served as Engineer Officer of the USS Arkansas, battleship of the Scouting Fleet. He returned to the Bureau of Engineering in 1929, and two years later joined the USS Chaumont for two years' duty as Executive Officer. He was serving in that capacity when that Naval transport took the 31st Infantry from Manila to Shanghai during the Sino-Japanese hostilities, including the first occupation of Shanghai by the Japanese.

From September 1933 to May 1936 he served in the Navy Recruiting Bureau, New York, and was Officer in Charge of the Naval Recruiting Station, Brooklyn, New York, and for twenty one months thereafter served as Executive Officer of the USS Concord, a light cruiser of the Battle Fleet. On 25 April 1938, he reported for duty as Chief of Staff and Aide to the Commandant, Sixteenth Naval District, headquarters at Cavite, Philippine Islands. On 17 March 1941, he became District Material Officer, Eighth Naval District, headquarters at New Orleans, Louisiana, and was serving in that capacity when the United States entered World War II on 8 December 1941.

In June 1942 he was ordered as Chief of Staff and Aide to the Commandant, Eighth Naval District, New Orleans, Louisiana. Detached from the Eighth Naval District in November 1943, he served for seven months as Commanding Officer of the US Naval Advance Base, New Georgia, and during the remaining months of the war was Chief of Staff and Aide to the Commander Western Carolines Sub Area. "For meritorious service as Commander Naval Bases, New Georgia, during operations against enemy Japanese forces from December 1943, to May 1944," he received the Bronze Star Medal. The citation further states, "During this period of sustained operational activities, Captain Oates worked tirelessly to establish and maintain all bases under his command in excellent operating condition. Stocking sufficient quantities of fuel, ammunition and other military supplies at strategically located points, he supported the forward operations of our Naval forces, thereby contributing materially to the defeat of the Japanese in the Northern Solomon Islands and Bismarck Archipelago Areas..."

He received a Letter of Commendation, with Ribbon, from the Commander in Chief, Pacific Fleet, as follows: "For excellent performance of duty as Chief of Staff to Commander Western Carolines Sub Area from July 27, 1944 to January 30, 1945. During this period he contributed much to the development of bases in this area and to to maintenance and supply of the various components of the Patrol and Escort Unit. His initiative, leadership and administrative ability assisted materially in the war effort..."

For meritorious service as Chief of Staff to the Commander Western Carolines Sub Area from 27 January to 10 August 1945, he received the Gold Star in lieu of the second Bronze Star Medal and was cited as follows: "...by skillfully handling problems incident to the effective functioning of the different services, Captain Oates developed an efficiently operating joint staff. In addition, he aided all elements in preparing for their effective execution of assigned missions..."

In August 1945 he reported to the Naval Receiving Station, San Pedro, California, for duty as President of the General Court Martial Board. He was hospitalized on 27 February 1946, and retired on 1 January 1947, for physical disability.

He was married on 18 September 1935 to Miss Charlotte Rinker of Virginia, in New York City.