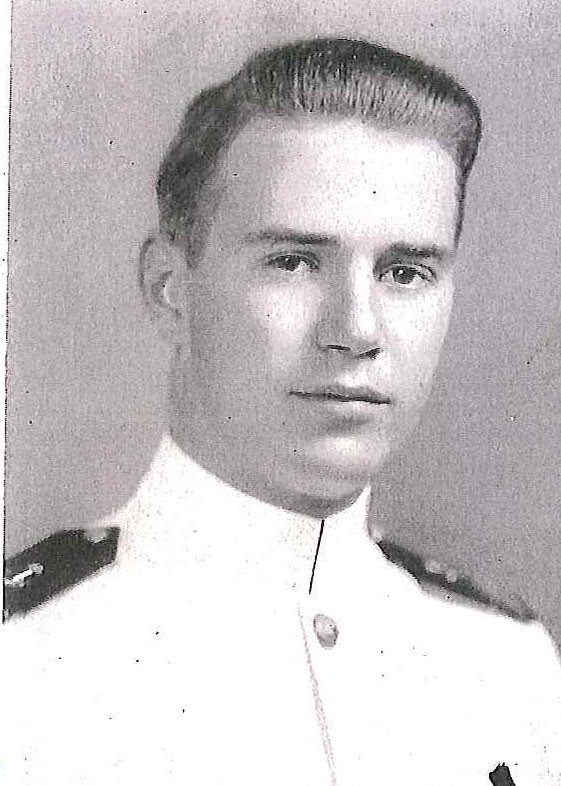 Daniel Jordan Carrison was born in Camden, South Carolina, on January 20, 1917, son of Henry G. Carrison, Jr., and Mrs. (Phyllis Dudley Hickson) Carrison. He attended public schools of Camden and was graduated from Marion Military Institute, Marion Alabama, in 1933. After twice passing entrance examinations to the Naval Academy (as first alternate, when the principal entered each time), he enlisted in the US Navy in order to take further examinations and enter the academy from the Service. During his enlistment he was assigned to USS Colorado, commanded by his uncle, also a native of Camden, Captain William Ancrum, USN (now deceased).

After a year’s service, he was honorably discharge to enter the Naval Academy on July 9, 1935. As a Midshipman he participated in boxing (BNAT), track and tennis, and was a member of the Reception Committee, Quarterdeck Society, and Chess Club. He was graduated and commissioned Ensign on June 1, 1939, and through subsequent promotions attained the rank of captain, his date of rank August 1, 1957.

Upon graduation from the Naval in June 1939 he was ordered to USS Trenton, in which he served for two years as a junior watch and division officer. During his period of service aboard, that cruiser was assigned to European squadron (40-T) from June 1939 to July 1940. Returning to the United States, he was a student at the Navy Supply Corps School, Harvard University, from September 1941 to February 1942, having transferred from the Line of the Navy to the Supply Corps. Thereafter, from March 1942 to June 1943 he served as Assistant Supply Officer at the Naval Air Station, Corpus Christi, Texas.

Transferring back to the Line of the navy in September 1943, he had duty afloat during the remainder of the World War II period, first as Assistant Gunnery officer of USS Biloxi, and as Gunnery Officer, successively, of USS Pittsburgh (CA-72) and USS Yorktown (CV-10). He has the Ribbon for, and a facsimile of, the Presidential Unit Citation awarded the USS Yorktown, and was personally awarded the Bronze Star Medal with Combat “V,” for service aboard that carrier. The citations follow, in part:

PUC-USS Yorktown:  “For extraordinary heroism in action against enemy Japanese forces in the air, at and on shore in the Pacific War Area from August 31, 1943, to August 15, 1945. Spearheading our concentrated carrier-warfare in forward areas, the Yorktown and her air groups struck crushing blows toward annihilating the enemy’s fighting strength; they provided air cover for our amphibious forces; they fiercely countered the enemy’s savage aerial attacks and destroyed his planes; and they inflicted terrific losses on the Japanese in fleet and merchant marine units sunk or damaged…”

Bronze Star Medal:  “For meritorious service as Gunnery Officer of the USS Yorktown, during operations against enemy Japanese forces on the Japanese Mainland from June 23 to August 15, 1945. Maintaining his department at a high peak of efficiency, Lieutenant Commander Carrison skillfully directed his men during combat operations… and… contributed to the success of his ship in carrying out attacks on hostile airfields, shipping and installations…”

Detached from the Yorktown in July 1946, he reported a month later to USS Manchester, for duty as Navigator. After a year’s service in that capacity, he was appointed Navy Secretary of the Research and Development Board, Washington, DC. In June 1949 he completed that assignment and entered Stanford University as a student. He received a Master’s degree in Personnel Administration in June 1950 and the same month joined the Staff of Commander Destroyer Squadron One. When detached from the staff in January 1951, he assumed command, in February, of USS O’Bannon.

“For meritorious service as Commanding Officer of the USS O’ Bannon during operations against enemy aggressor forces in Korea from December 4, 1951 to April 2, 1953…” he was awarded a Gold Star in lieu of the second Bronze Star Medal, with Combat “V”. The citation states that he was “highly successful in directing the operations of his ship during air and surface missions off the east coast of Korea with the Screen Group of Task Force 77 and in conducting troop redeployment operations with Amphibious Force Far East between Inchon, Korea, and Yokohama, Japan… participating in bombardment missions against hostile troops and installations at Wonsan… (and on three occasions dispersing) troop concentrations, thereby inflicting heavy casualties upon the enemy…”

In May 1953 he reported as Assistant Head of the Mobilization Plans Section, Bureau of Naval Personnel, Navy Department, Washington, DC, relieving Commander J.T. Bullen, USN, who as an Ensign aboard the Colorado had coached him for entrance into the Naval Academy. In June 1955 he assumed command of USS Wilkinson and in October 1956 was detached from that destroyer leader to serve as a Staff Member of the Cordiner Pay Committee. He was Commander Detail Officer in the Bureau of Naval Personnel from July 1957 until July 2958, after which he had instruction at the National War College, Washington, DC. He became Commander Destroyer Division Two Hundred Fifty-Three in August 1959 and in June 1960 joined the Staff of the Commander in Chief, US Pacific Fleet.

From June 1962 until December 1963 he was Director, Plans Division, in the Bureau of Naval Personnel, Navy Department, Washington, DC. In January 1964 he assumed command of USS Canberra (CAG-2), and in December of that year reported as Chief of Staff and Aide to Commander Cruiser Destroyer Force, Pacific. He was ordered to duty in the Department of the Navy Program Appraisal Office, Navy Department in August 1965.

He is a member of the Army and Navy Country Club, Arlington, Virginia.