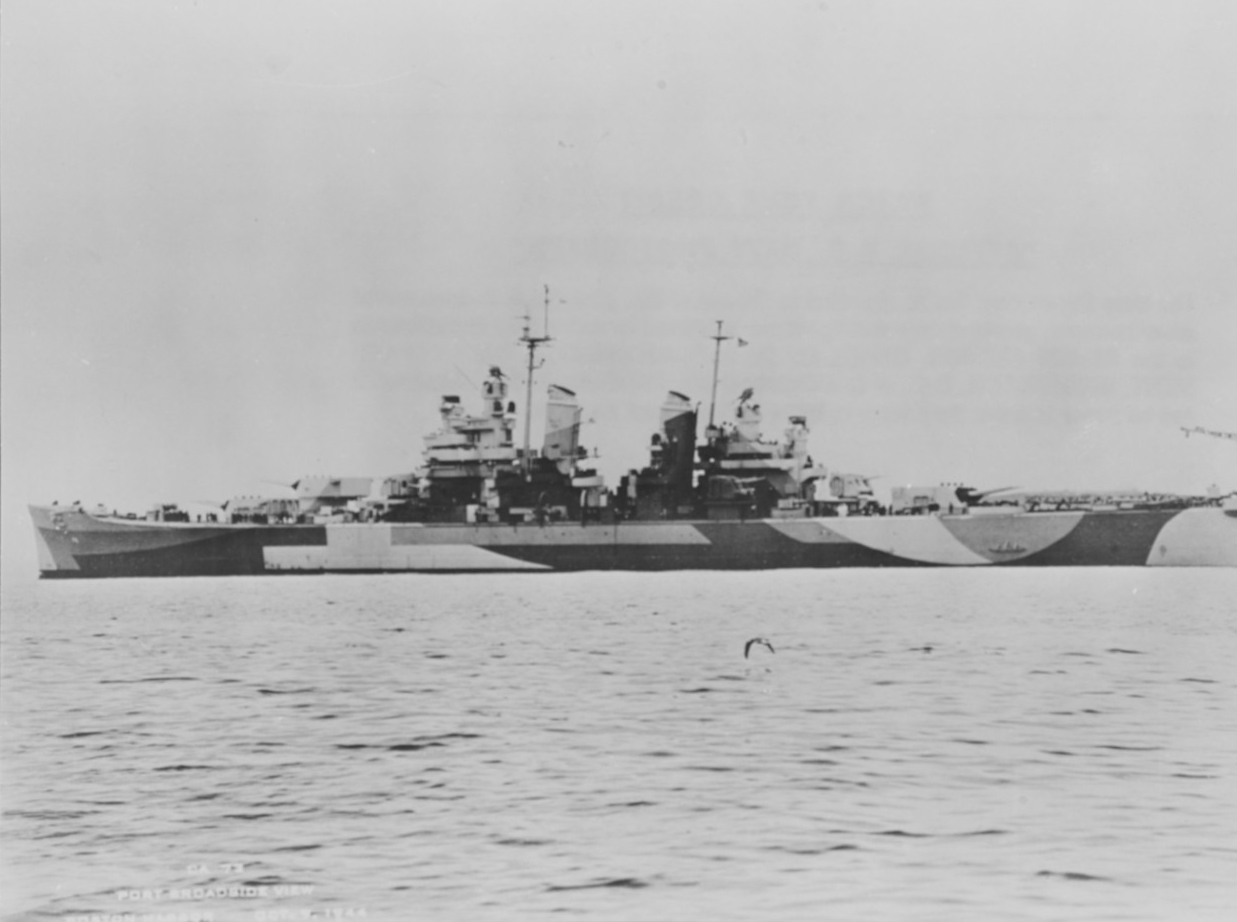 An industrial city of western Pennsylvania.

Pittsburgh trained along the east coast and in the Caribbean until departing Boston 13 January 1945 for duty in the Pacific. After calling in Panama and final gunnery exercises in the Hawaiians, she joined TF 58 at Ulithi 13 February, assigned to TG 58.2 formed around aircraft carrier Lexington (CV-16).

The force sortied 10 February to prepare the way for the assault on Iwo Jima. Carrier air strikes against airfields near Tokyo 16 and 17 February limited Japanese air response to the initial landings 19 February. That day planes from Pittsburgh's group began direct support to Marines fighting to overcome fierce Japanese resistance on the island. Final strikes against Tokyo's environs 25 February and 1 March against the Nansei Shoto completed this operation.

The force sailed from Ulithi 14 March to pound airfields and other military installations on Kyushu 18 March, and again the next day. The Japanese struck back at dawn on the 19th, with an air raid which set Franklin (CV-13) ablaze, her decks titter chaos and power lost. Pittsburgh dashed to the rescue at 30 knots. After saving 34 men from the water, Pittsburgh, with Santa Fe (CL-60), performed an outstanding feat of seamanship in getting a tow line on board the flaming carrier. Pittsburgh than began the agonizingly slow task of pulling the carrier to safety, as the flattop-s crew struggled to restore power. Twice gunning off enemy air attacks attempting to finish Franklin, the cruiser continued her epic effort until at noon 20 March when Franklin was able to cast off the tow and proceed, albeit slowly, under her own power. Capt. Gingrich had remained at the conn for 48 hours during this display of superlative professionalism.

Between 23 March and 27 April, Pittsburgh guarded the carriers as they first prepared for, then covered and supported the invasion of Okinawa. Enemy airfields were interdicted, and the troops given direct aid from the carriers. Pittsburgh repelled enemy air attacks and launched her scout planes to rescue downed carrier pilots. After replenishing at Ulithi, the force sortied once more 8 May to attack the Nansei Shoto and Southern Japan in the continuing fight for Okinawa.

On 4 June, Pittsburgh began to fight a typhoon which by early next day had increased to 70-knot winds and 100-foot waves. Shortly after her starboard scout plane had been lifted off its catapult and dashed onto the deck by the wind, Pittsburgh's second deck buckled, her bow structure thrust upward, and then wrenched free. Miraculously, not a man was lost. Now her crew-s masterful seamanship saved their own ship. Still fighting the storm, and maneuvering to avoid being rammed by the drifting bow-structure, Pittsburgh was held quarter-on to the seas by engine manipulations while the forward bulkhead was shored. After a 7-hour battle, the storm subsided, and Pittsburgh proceeded at 6 knots to Guam arriving 10 June. Her bow, nick-named "McKeesport" (a suburb of Pittsburgh), was later salvaged by Munsee and brought into Guam.

With a false bow, Pittsburgh left Guam 24 June bound for Puget Sound Navy Yard, arriving 16 July. Still under repair at war's end, she was placed in commission in reserve 12 March 1946 and decommissioned 7 March 1947. 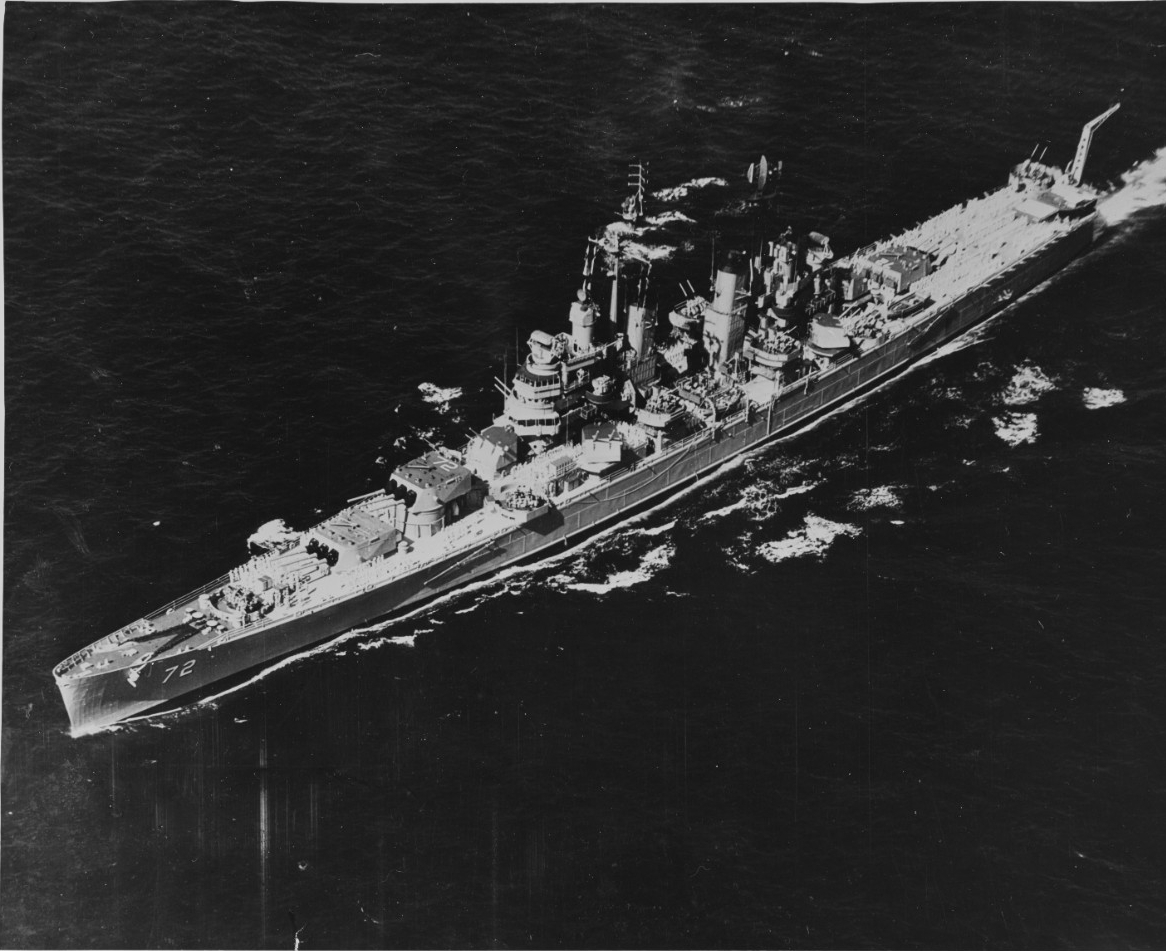 Pittsburgh (CA-72) underway at sea during the middle 1950s after she had been refitted with 3/50 anti-aircraft guns and new radars. U.S. Naval History and Heritage Command photograph, NH 50353.

As the Korean War called for a major restoration of naval strength, Pittsburgh recommissioned 25 September 1951, Capt. Preston V. Mercer in command. She sailed 20 October for the Panama Canal, trained out of Guantanamo Bay, Cuba, and prepared at Norfolk for a tour of duty with the 6th Fleet for which she sailed 11 February 1952. Returning 20 May, she joined in the Atlantic Fleet's schedule of exercises and special operations in the western Atlantic and Caribbean.

During her second Mediterranean cruise, for which she sailed 1 December, she flew the flag of Vice Admiral Jerauld P. Wright, Commander in Chief, Naval Forces Eastern Atlantic and Mediterranean for a good-will cruise to the Indian Ocean in January 1953. She returned to Norfolk in May for a major modernization overhaul, but rejoined the 6th Fleet at Gibraltar 19 January 1954. Once again she carried Admiral Wright to ports of the Indian Ocean during this cruise which ended with her return to Norfolk 26 May. After further operations along the eastern seaboard and in the Caribbean, she passed through the Panama Canal 21 October to join the Pacific Fleet, with Long Beach her home port.

She sailed almost at once for the Far East, calling at Pearl Harbor 13 November and reaching Yokosuka 26 November. She joined the 7th Fleet in exercises and to cover the Chinese Nationalist defense of the Tachen Islands and their evacuation of civilians and non-essential military personnel. Leaving Japan 16 February 1955, she resumed west coast operations until reporting at Puget Sound Naval Shipyard 28 October for inactivation. She went into reserve 28 April 1956, and decommissioned at Bremerton 28 August 1956. There she remains in reserve into 1970.