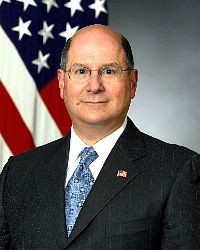 Prior to joining the administration of President George W. Bush, Dr. Winter served as a corporate vice president and president of Northrop Grumman's Mission Systems sector. In that position he oversaw operation of the business and its 18,000 employees, providing information technology systems and services; systems engineering and analysis; systems development and integration; scientific, engineering, and technical services; and enterprise management services. Dr. Winter also served on the company's corporate policy council.

The Secretary of the Navy is responsible for all the affairs of the Department of the Navy, including recruiting, organizing, supplying, equipping, training, mobilizing, and demobilizing. The Secretary also oversees the construction, outfitting, and repair of naval ships, equipment and facilities. The office is also responsible for the formulation and implementation of naval policies and programs that are consistent with the national security policies and objectives established by the President and the Secretary of Defense. The Department of the Navy consists of two uniformed Services: the United States Navy and the United States Marine Corps.