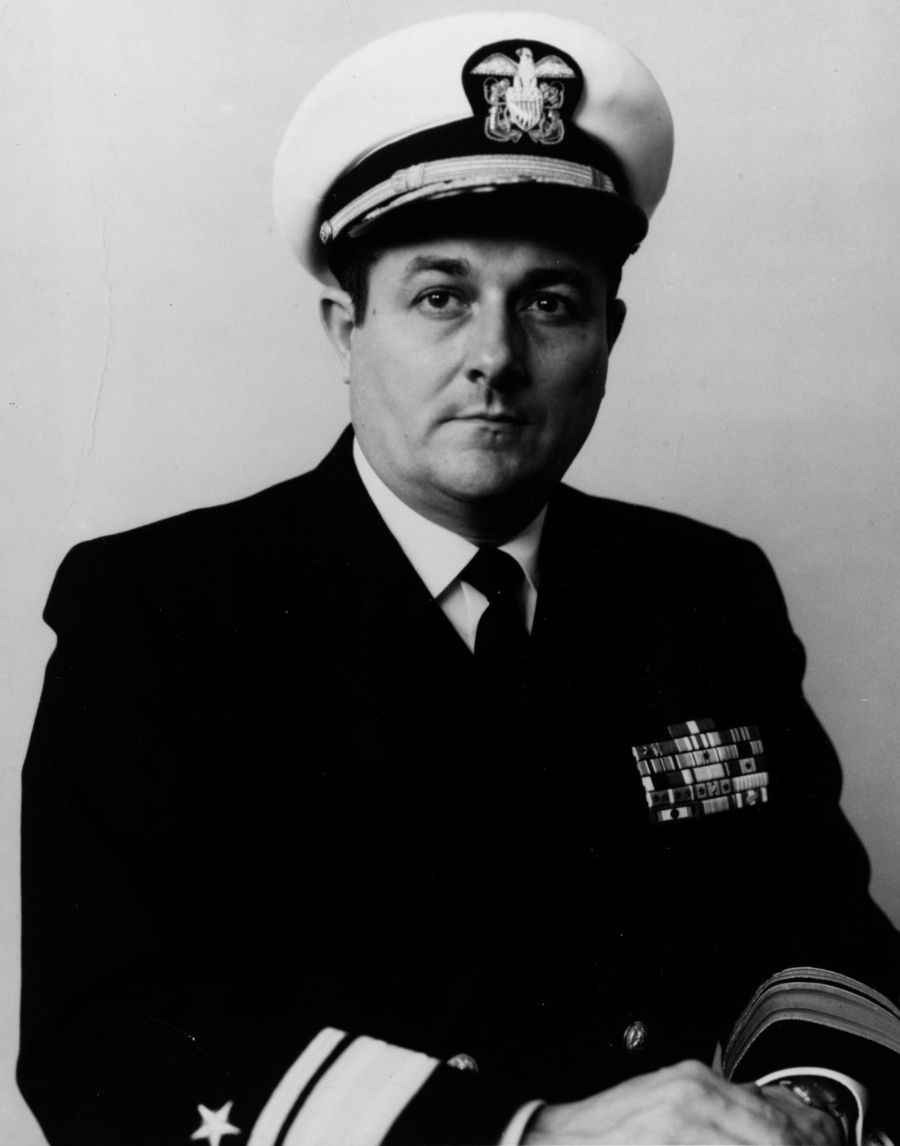 Rembrandt Cecil Robinson was born in Clearfield, Pennsylvania, on 2 October 1924, son of Isaac H. and Helen M. (Bailey) Robinson. He attended Pennsylvania State College at State College, before enlisting in the US Naval Reserve on 5 June 1943. He was appointed Midshipman; attended the Naval Reserve Midshipmen School on board USS Prairie State and was commissioned Ensign, United States Naval Reserve on 26 October 1944. He subsequently advanced in rank to that of Rear Admiral, to date from 1 September 1970, having transferred to the Regular Navy on 24 September 1946.

After receiving his commissioning in 1944, he had two months' duty at the Administrative Command, Amphibious Forces, Pacific Fleet, and in December 1944 joined USS LST-485. From July to September 1946 he was assigned to Headquarters, Twelfth Naval District, San Francisco, California, and for one month was attached to Headquarters, Fourth Naval District, Philadelphia, Pennsylvania. During the period October 1946 through July 1948 he served successively in USS LST-1032, USS LST-601, and USS LST-912, then reported for instruction at the Naval General Line School, Newport, Rhode Island.

In June 1949 he joined USS English as Engineering Officer. "For meritorious service...when the (English) was attacked by enemy shore batteries while at anchor at Wonson..." he was awarded the Bronze Star Medal with Combat "V." He was assigned in March 1952 to the Bureau of Naval Personnel, Navy Department, Washington, DC, and in September 1954, reported for instruction at the Fleet Sonar School, San Diego, California. He served as Executive Officer of USS Walker (DDE-517) from November 1954 to July 1956, when he began a course of instruction at the Armed Forces Staff College, Washington, DC. He became Assistant Head of the Command Policy Section, Strategic Plans Division, Office of the Chief of Naval Operations in January 1957, and between June and August 1959 attended the Fleet Sonar School, Key West, Florida.

He had fitting out duty in USS Charles Berry at the Avondale (Louisiana) Marine Ways, Inc., and assumed command at that destroyer escort upon her commissioning, 25 November 1959. Detached from the Charles Berry in November 1960, he next had a month's duty on the Staff of Commander Cruiser-Destroyer Force, US Pacific Fleet. He assumed command of USS Bradford (DD-545) in December 1960, and in January 1962 returned to the Office of the Chief of Naval Operations, where he served as Objectives Plans Officer in the Strategic Plans Division. While there he received the degree of Bachelor of Arts in Social Sciences from George Washington University in 1964.

During the period August 1964 through August 1968 he was Executive Assistant and Aide to the Commander in Chief, Pacific. "...For providing personal assistance and advice to the Commander in Chief, Pacific in matters ranging from current combat operations to the long-range aspects of national and international strategy and policy..." he was awarded the Distinguished Service Medal. He had one month's instruction at the Fleet Anti-Air Warfare Training Center, San Diego, California, during August and September 1968, then assumed command of Destroyer Squadron THIRIY-ONE. He was awarded a Gold Star in lieu of the Second Bronze Star Medal for "meritorious achievement...as Commander Destroyer Squadron THIRIY-ONE from September 28, 1968 to January 30, 1969 and as Commander Yankee Station Antisubmarine Warfare Training Unit..."

He was also entitled to the Ribbon for, and a facsimile of the Meritorious Unit Commendation awarded Antisubmarine Warfare Group FIVE.

In March 1969 he was assigned to the Chairman's Staff Group, Office of the Joint Chiefs of Staff, Washington, DC "For exceptionally meritorious service...as the personal liaison between the Chairman, Joint Chiefs of Staff and the Assistant to the President for National Security Affairs and as Special Member of the Chairman's Staff Group..." he was awarded a Gold Star in lieu of the Second Distinguished Service Medal. In July 1971 he assumed command of Cruiser Destroyer Flotilla ELEVEN. He was killed on 8 May 1972 in a helicopter crash in the Gulf of Tonkin, during a landing approach to USS Providence (CLG-6), his flagship.