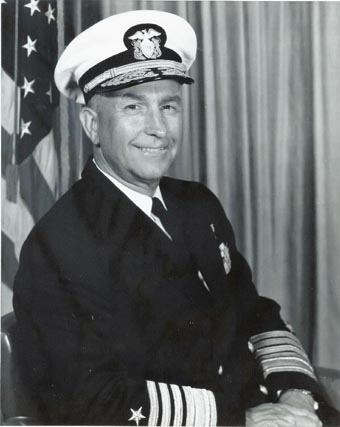 Thomas Hinman Moorer was born in Mount Willing, Alabama, February 9, 1912, son of the late Dr. R. R. Moorer and the late Mrs. (Hulda Hill Hinson) Moorer. He was graduated from Cloverdale High School in Montgomery, Alabama, Valedictorian of the Class of 1927, and on June 10, 1929, entered the U. S. Naval Academy. As a midshipman he played football for three years. He was graduated and commissioned ensign on June 1, 1933, and through subsequent promotions attained the rank of rear admiral to date from August 1, 1958; vice admiral, to date from October 5, 1962 and admiral, to date from June 26, 1964.

After graduation in June 1933, he served six months on board USS Salt Lake City as a junior officer in the gunnery department. He assisted in fitting out USS New Orleans at the Navy Yard, New York, and served in that cruiser's gunnery and engineering departments from her commissioning, February 15, 1934, until detached in June 1935. During the next year he was a student at the Naval Air Station, Pensacola, Florida. After completing flight training in July 1936 he was designated a Naval Aviator.

In August 1936 he was assigned to Fighting Squadron ONE-B, based briefly on the USS Langley and later on the USS Lexington. He was transferred in July 1937 to Fighting Squadron SIX, based on the USS Enterprise, and continued duty with that squadron until August 1939. He then joined Patrol Squadron TWENTY-TWO, a unit of Fleet Air Wing TWO, and later Fleet Air Wing TEN, and was with that squadron at Pearl Harbor, Territory of Hawaii, when the Japanese attacked the Fleet there on December 7, 1941. His squadron was sent to the Southwest Pacific and during the Dutch East Indies Campaign, he was shot down in a PBY on February 19, 1942, north of Darwin, Australia. He was rescued by a ship which was sunk by enemy action the same day.

He was awarded the Purple Heart Medal for wounds received on February 19, 1942, and the Silver Star Medal for "extremely gallant and intrepid conduct as pilot of a patrol plane during and following an attack by enemy Japanese aircraft in the vicinity of Cape Diemen, February19, 1942..." The citation continues: "...Although he and his co-pilot were wounded in the attack, (he) succeeded in landing his badly damaged and blazing plane. His courage and leadership during a subsequent attack upon the rescue ship and while undergoing hardships and dangers of returning the survivors to the Australian mainland were in keeping with the highest traditions of the United States Naval Service."

He is entitled to the Ribbon for, and a facsimile of the Presidential Unit Citation to Patrol Squadron TWENTY-TWO. The citation follows: "For extraordinary heroism in action as a Unit of Patrol Wing TEN attached to Aircraft, U. S. Asiatic Fleet, operating against enemy Japanese forces in the Philippine and Netherlands East Indies Areas from January 1942 to March 3, 1942. Holding fast to their courage as the Japanese ruthlessly hunted them down the pilots of (that squadron) doggedly maintained their patrols in defiance of hostile air and naval supremacy, scouting the enemy and fighting him boldly regardless of overwhelming odds and in spite of the crushing operational inadequacies existing during the first months of the war. . .”

Between March and June 1942, he served with Patrol Squadron ONE HUNDRED ONE and was awarded the Distinguished Flying Cross. The citation follows: "For extraordinary achievement and heroic conduct as commander of a patrol plane on a hazardous round-trip flight from Darwin, Australia to Beco, Island of Timor, on the afternoon and night of May 24, 1942. In an undefended, comparatively slow flying boat, Lieutenant Moorer braved an area dominated by enemy air superiority, effected a precarious landing in the open sea at dusk and took off at night in the midst of threatening swells, with a heavily loaded airplane. His superb skill and courageous determination in organizing and executing this perilous mission resulted in the delivery of urgently needed supplies to a beleaguered garrison and the evacuation of eight seriously wounded men who otherwise might have perished."

After his return to the United States in July 1942, he had temporary duty from August of that year to March of the next in the United Kingdom, as a mining observer for the Commander in Chief, U. S. Fleet. He then fitted out and assumed command of Bombing Squadron ONE HUNDRED THIRTY-TWO, operating in Cuba and Africa from its base at Key West, Florida, Boco Chica Air Base. Detached from that command, he served as gunnery and tactical officer on the staff of Commander Air Force, Atlantic, from March 1944 to July 1945.

He was awarded the Legion of Merit: "For meritorious conduct...as Force Gunnery and Tactical Officer on the staff of Commander Air Force, Atlantic Fleet.,," The citation states that he "planned and supervised the development and practical application of tactics, doctrines and training methods relating to anti-submarine warfare and gunnery; supervised many experimental and developmental projects; and coordinated information on enemy tactics and countermeasures...By his outstanding executive ability, Commander Moorer contributed materially to the combat effectiveness of aircraft in anti-submarine warfare. . ."

From August 1945 until May 1946, he was assigned to the Strategic Bombing Survey - Japan - of the Office of the Chief of Naval Operations, engaged in the interrogation of Japanese Officials. For two years thereafter, he served as executive officer of the Naval Aviation Ordnance Test Station, Chincoteague, Virginia. He next had duty afloat as operations officer of USS Midway (July 1948-November 1949), and as operations officer on the staff of Commander Carrier Division FOUR, Atlantic Fleet (December 1949-Ju1y 1950).

Reporting in August 1950 to Inyokern, California, he served for a year as experimental officer of the Naval Ordnance Test Station. During the year following, he was a student at the Naval War College, Newport, Rhode Island, and in August 1953, again reported for duty on the staff of Commander Air Force, Atlantic Fleet. In May 1955 he was ordered to the Navy Department to serve as aide to the Assistant Secretary of the Navy (Air) and in July 1956 was detached to sea duty as commanding officer of USS Salisbury Sound (AV-13). 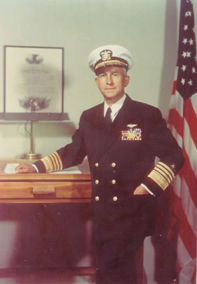 On July 26, 1957 his selection for the rank of Rear Admiral was approved by the President and in October, the same year, he reported as Special Assistant, Strategic Plans Division, Office of the Chief of Naval Operations, Navy Department. From January 1, 1958 until July 1959, he was Assistant Chief of Naval Operations (War Gaming Matters), after which he commanded Carrier Division SIX. He returned to the Office of the Chief of Naval Operations in November 1960 and served as Director of the Long Range Objectives Group until October 1962 when he assumed command of the SEVENTH Fleet. For his service in this assignment he was awarded the Distinguished Service Medal. In June 1964 he became Commander in Chief of the Pacific Fleet. Admiral Moorer assumed command of NATO's Allied Command, Atlantic, the U. S. unified Atlantic Command, and the U. S. Atlantic Fleet on April 30, 1965.

On June 17, 1967, he was awarded a Gold Star in lieu of a second Distinguished Service Medal: "For exceptionally meritorious service as Commander in Chief Atlantic, Commander in Chief U. S. Atlantic Fleet, Commander in Chief Western Atlantic Area, and Supreme Allied Commander Atlantic...” The citation states in part, “During the Dominican Republic Crisis of 1965-66, he directed military operations with utmost professionalism, judgment and diplomacy, resulting in a cease-fire, politico-military stabilization of the situation...and finally the orderly and peaceful withdrawal of U. S. forces...” The citation continues: “As Supreme Allied Commander Atlantic, Admiral Moorer foresaw the need, and initiated a major revision in NATO maritime strategy...his development of the concept of a standing naval force for the Allied Command Atlantic; and his assistance in establishing the Iberian Atlantic Command Headquarters resulted in major contributions to the North Atlantic Treaty Organization. . .”

On January 13, 1969, he was awarded a Gold Star in lieu of a Third Award of the Distinguished Service Medal “For exceptionally meritorious service as Chief of Naval Operations from August 1967 to January 1969.” The citation indicates that “Admiral Moorer provided forceful and aggressive leadership . . . during a period of increasing worldwide commitments and continuous combat operations against enemy forces in Southeast Asia.”

On July 1, 1970, he was awarded a Gold Star in lieu of a Fourth Award of the Distinguished Service Medal "for exceptionally meritorious service to the Government of the United States in a duty of great responsibility as the Chief of Naval Operations from August 1967 to July 1970." The citation reflects his contributions to the modernization of the Navy's ships and aircraft, to the United States future status as a world maritime power, to the security of the United States, and in support of United States foreign power and national strategy. The citation further indicates "As a member of the Joint Chiefs of Staff, Admiral Moorer, through his statesmanship and superb understanding of the factors which influence the formulation of national policy, contributed substantially to the development of important policies during a period of vital and unusual significance to the United States.”

On July 2, 1970, Admiral Moorer assumed the office of Chairman. He was reappointed by President Nixon for a second two-year term as Chairman of the Joint Chiefs of Staff on June 20, 1972. The reappointment was confirmed by the Senate on June 30, 1972. He was awarded a Gold Star in lieu of the Fifth Distinguished Service Medal “for exceptionally meritorious service...” in that capacity. The citation further states in part: “. . . Admiral Moorer rendered sage advice on matters of the highest priority to the President, Secretary of Defense, and the National Security Council...Displaying the utmost in personal tact and diplomacy with government and military leaders of other nations, Admiral Moorer was instrumental in strengthening their respect for the United States which was vital to the perpetuation of international defense. His contributions to the Strategic Arms Limitations Talks were of key importance to the interests of the United States in these vitally important negotiations. . ." 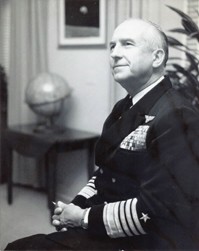