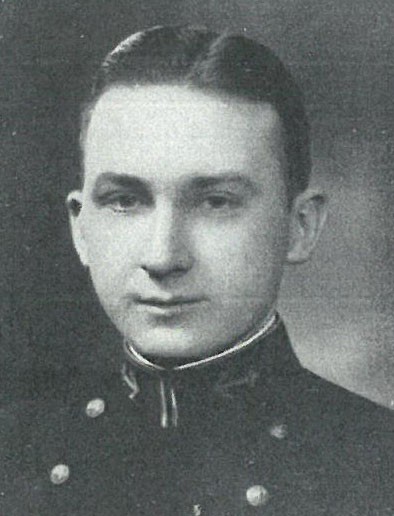 Charles Herbert Andrews was born in New Haven, Connecticut, on 14 May 1908, son of Charles M. and Mary W. (Herbert) Andrews, He was graduated from Hillhouse High  School in New Haven in 1925, and on 15 June 1926 entered the US Naval Academy, Annapolis, Maryland, as a Midshipman from Connecticut. He was graduated and commissioned Ensign in the US Navy on 5 June 1930, and through subsequent promotions attained the rank of Captain, to date from 1 July 1949.

After graduating from the Naval Academy, he had sea duty from July 1930 until November 1932 as a junior officer in the gunnery department of USS Concord. From January to June 1933 he was a student at the Submarine School, New London, Connecticut, and in July joined USS R-10 in which he was Communications Officer until August 1933. He took passage in USS Henderson, and in October of that year reported as Engineering Officer in USS Bonita.  Detached from that Submarine in December 1935, the next month he joined USS R-2, to serve as Executive 0fficer until June 1937.

He attended a course in marine engineering at the Postgraduate School, Annapolis, Maryland; prior to reporting in July 1939 as Executive 0fficer of USS R-13. He had similar duty in USS Tambor for a year, March 1940-March 1941, after which he commanded the USS S-24 for nine months. In December he joined the staff of Commander Submarines, US Atlantic F1eet, as Force Engineer, continuing to serve in that assignment until June 1942. Following fitting out duty in USS Gurnard, he became Commanding Officer of that submarine upon her commisioning, 18 September 1942. For outstanding service while commanding that submarine, he was awarded the  Silver Star Medal, a Gold Star in lieu of a second Silver Star Medal, the Navy Cross, and a Gold Star in lieu of the Second Navy Cross.  He is also entitled to the Ribbon for and a facsimile of the Navy Unit Commendation awarded the USS Gurnard. The citations follow in part:

Silver Star Medal: "For conspicuous gallantry and intrepidity ...during a War Patrol in enemy Japanese-controlled waters. Talking expert advantage of every  opportunity to strike the enemy, Commander Andrews skillfully conducted aggressive, determined attacks and, by his forceful leadership and indomitable fighting spirit  in the face of strong, persistent hostile opposition, enabled his command to destroy an important amount of enemy shipping and inflict severe damage on many thousands  of additional tons..."

Gold Star in lieu of Second Silver Star Medal:  "For conspicaous gallantry and intrepidity...during a War Patrol...in enemy Japanese controlled waters.  After contacting an armed transport with ten destroyer escorts, (he) fearlessly penetrated the formidable screen and launched an aggressive night-surface attack to severely damage this valuable enemy vessel. In two other brilliantly executed assaults against heavily defended convoys, he demolished or extensively damaged three more Japanese ships, for a grand total of more than 28,000 tons. Constantly aggressive in the face of severe countermeasures, (he) accomplished the destruction of vast amounts of critical enemy shipping and supplies, thereby contributing directly to our successful prosecution of the war..."

Navy Cross: "For extraordinary heroism...on patrol in enemy Japanese-controlled waters. Skillfully maneuvering his ship into striking position, Commander Andrews attacked the enemy with aggressive determination and succeeded in sinking over 15,000 tons and in damaging over 43,000 tons of hostile shipping. Despite unusually strong Japanese countermeasures, he evaded the enemy by his prompt and expert evasive tactics, finally bringing his ship safely into port..."

Gold Star in lieu of Second Navy Cross:  "For extrordinary heroism as Commanding 0fficer of the USS Gurnard, during the Fifth War Patrol of that vessel in enemy Japanese-controlled waters, from 16 April to 11 June 1944. Aggressive and relentless in tracking the enemy, (he) launched his attacks daringly in the face of extremely severe hostile countermeasures and unfavorable sea conditions and, fighting the gallant Gurnard boldly a series of brilliantly executed strikes against strongly escorted formations, succeeded in sinking three freightors and a large tanker and in damaging a battleship and another freighter. By his inspiring leadership, outstanding courage and valiant devotion to duty throughout each furious action, (he) contributed to the success of our forces in reducing Japanese Naval strength in the Pacific War Area...

"Navy Unit Commendation:  "For outstanding heroism in action during her Second War Patrol in the Palau Islands, the Third in the South China Sea, the Fourth off the Southeast Coast of Honshu, and the Fifth in the Eastern Celebes Sea. Holding relentlessly to her missions in defiance of watchful aircraft patrols and surface escort vessels, the USS Gurnard daringly pierced the enemy's screen to strike at heavily protected convoys and combatant units in these restricted waters. She boldly closed range and sent her gunfire and torpedoes into one target after another despite continual hostile bombing and depth-charge attacks and sank 11 Japanese ships, including a destroyer for a total of 71,500 tons; she damaged 10 additional vessels, one a 32,700 ton battleship and one a 17,000 ton aircraft carrier to score a total of 107,200 tons..."

"Captain Andrews assumed responsibility for the training and general readiness of the submarines under his command, thereby contributing materially to the outstanding record of damage inflicted by these submarines on the enemy..."

In December 1945 he became Commander Submarine Division TWENTY TWO, and in November 1916 was detached from that command for duty as Administrative Officer at the Portsmouth (New Hampshire) Naval Shipyard. He remained there until June 1948, reporting the next month as Readiness Officer on the staff of Commander Submarines, US Atlantic Fleet. He was Commanding Officer of the Submarine Base, Pearl Harbor, T H, between July 1950 and June 1952, after which he commanded Submarine Squadron FOUR based at Key West, Florida, until July 1953. He next attended a course at the Naval War College, Newport, Rhode Island, and in June 1954 became Chief of Staff to the Commander Submarine Force, US Atlantic Fleet.

In August 1955 he assumed comand of USS Arcadia (AD 23), and under orders of 8 May 1956, became Commander Escort Destroyer Squadron ONE, later Commander Destroyer Squadron 25. In September 1957 he was ordered to duty in the Bureau of Naval Personnel, Navy Department, and on 30 December 1957, was assigned to the Office of the Chief of Naval Operations (Anti-Submarine Warfare Readiness)