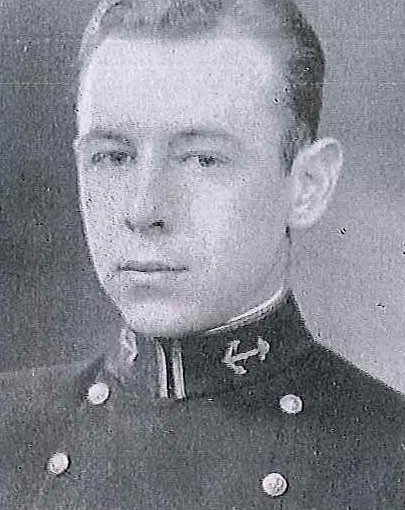 Irvin Lowell Dew was born in Aberbeen, South Dakota, on August 29, 1910, son of Irvin A. and Clara Jordan Dew. He attended Medford, Oregon, High School prior to his appointment to the US Naval Academy, Annapolis, Maryland, in 1929. Upon graduation in June 1933 he returned home (commissions being limited that year, due to previous legislation) and on October 23, 1933, was commissioned Ensign in the US Naval Reserve. On July 12, 1934, he was commissioned Ensign in the US Navy, and subsequently advanced to the rank of Captain, to date from July 1, 1952.

On July 24, 1934, he reported to USS Trenton, and from September of that year until January 1937 served on board USS Richmond as a junior Watch and Division Officer and Signal Officer, and during that period had practical instruction in Engineering. He was a student at the Naval Air Station, Pensacola, Florida, the next year, and on February 11, 1938 was designated Naval Aviator. Detached with orders to USS Colorado, he served as an aviator on that battleship, attached to Observation Squadron 4, and in May 1939 was transferred to USS Saratoga, for duty first with Fighting Squadron 2, and from September 1939 to September 1940 as Gunnery Officer of Scouting Squadron 3.

In October 1940 he reported to the Naval Air Station, Jacksonville, Florida, where he was serving as a flight instructor at the outbreak of World War II in December 1941. He remained there until June 1942, when he was ordered to the Caribbean Area for duty on the Staff (Operations) of the Commander Caribbean Sea Frontier, Headquarters at San Juan, Puerto Rico. He assisted in fitting out Bombing Squadron 27 in June and July 1943, served briefly with Bombing Squadron 28 at Norfolk, Virginia, and from August 1943 until April 1944 commanded Bombing Squadron 15, of the Naval Air Force, Atlantic Fleet.

He attended the Army and Navy War College in the summer of 1944, and from October of that year until December 1945, during the latter period of the war, served on the Staff of the Commander Escort Carrier Force, Pacific Fleet. He is entitled to the Ribbons for the Presidential Unit Citation to USS Natoma Bay and the Navy Unit Commendation to USS Makin Island. He received a Letter of Commendation from the Commander SEVENTH Fleet for his personal service at Luzon, Philippine Islands, and was awarded the Legion of Merit, with the following citation:

“For exceptionally meritorious conduct…as Force Air Operations and Gunnery Officer for the Commander Escort Carrier Force, US Pacific Fleet, during the Okinawa Campaign; and as Force Navigation, Logistics and Gunnery Officer on this staff during the Iwo Jima operations, from January to June 1945. Demonstrating a through knowledge of his numerous and complex duties, Commander Dew capably planned and coordinated the supply and logistics of the many ships of the force, enabling these ships to maintain their fighting efficiency at a high level. During the prolonged and complex action at Okinawa, he was responsible for the organization and control of air support operations and, at all times, maintained an adequate supply of proper ammunition and weapon fuzes…contributing materially to the success of these campaigns…”

After two years’ duty as Chief Staff Officer to Commander Fleet Logistic Air Wing, Atlantic/Continental, he was ordered to the Navy Department, Washington, DC, for duty as Head of the Civil Aviation Liaison Branch of the Flight Services Division. On July 5, 1955, he was ordered detached for duty as Commanding Officer, Air Transport Squadron 3, and two years later was transferred to the Staff of the Supreme Allied Commander, Atlantic. Under orders of August 20, 1958, he later assumed command of USS Boxer (CVS-21) and, after a year at sea had a tour of duty in the Office of the Chief of Naval Operations, Navy Department, Washington, DC.

On September 8, 1961, he was ordered detached and to duty as Chief of Staff and Aide to the Commander, SECOND fleet.