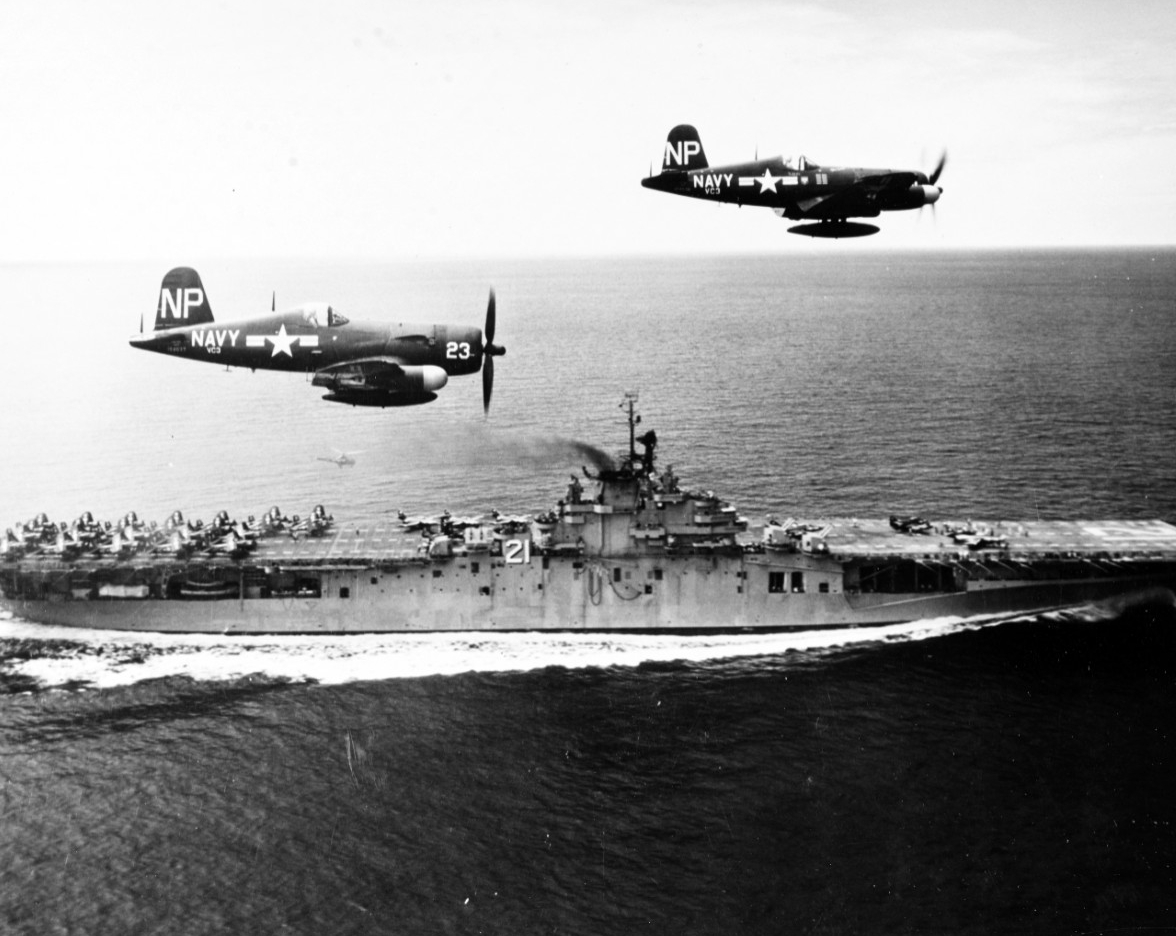 Enterprise, patrolling the New England coast to “protect the coasting trade to the eastward which has been so much interrupted by small cruisers of the enemy,” was searching the bay around Pemaquid Point when she discovered a brig getting underway that appeared to be a vessel of war, and immediately gave chase. Boxer, however, fired several rounds, and stood for the fight. Lt. Burrows, having identified the stranger’s strength and enemy character, ordered Enterprise to stand out to allow room to maneuver. Boxer gave chase, following Enterprise into open waters. At 3:00 that afternoon, Enterprise shortened sail and ran down, intending to draw in her enemy. At twenty minutes past three o’clock that afternoon with the ships within half pistol shot, both ships opened their batteries. The first broadside proved costly to both vessels: Capt. Blyth fell almost immediately when a shot struck nearby. Not long after, Burrows fell mortally wounded by a cannon shot to the chest. The fighting raged for over an hour, with both ships exchanging volleys and suffering great damage. By 4:00 p.m., Boxer was a complete wreck, all of her braces and rigging shot away, her main topmast and topgallant mast hanging over the side, fore and main masts virtually gone, three feet of water in her hold, and no surgeon to tend to her wounded. As Enterprise maneuvered for a raking position, Lt. McCrery, having assumed command, conferred with his officers and decided to hail Enterprise and concede the battle. The ensigns, having been nailed to the masts by Capt. Blyth, could not be hauled down.

The U.S. Navy never put Boxer into service. Sold in Portland, Maine, she sailed from that port for many years as a merchantman.

The fifth Boxer (CV-21) was laid down on 13 September 1943, by Newport News Shipbuilding and Dry Dock Co., Newport News, Va.; launched on 14 December 1944; sponsored by Miss Ruth D. Overton, daughter of the Senator from Louisiana; and commissioned 16 April 1945, Capt. D.F. Smith in command.

Completed too late to take part in World War II, Boxer joined the Pacific Fleet at San Diego, Calif., in August 1945. From September 1945 to 23 August 1946 she operated out of Guam as flagship of Task Force (TF) 77 in the Western Pacific. During this tour she visited Japan, Okinawa, the Philippines, and China. She returned to San Francisco, Calif., on 10 September 1946, and operated off the west coast engaged in normal peacetime duty until departing for the Far East on 11 January 1950. After service with the Seventh Fleet in the Far East during the first half of 1950, she returned to San Diego, arriving on 25 June.

With the outbreak of the Korean conflict she was pressed into service to carry planes to the fighting. During 14–22 July 1950, she made a record crossing of the Pacific in eight a half days, with 150 Air Force and Navy planes, and 1,000 troops. On her return trip (27 July-4 August), she cut the record to 7 days, 10 hours, and 36 minutes. After fast repairs she departed for the Far East on 24 August, this time to join TF 77 in giving air support to the troops. Her planes supported Operation Chromite, the landing at Inchon [Incheon], South Korea, on 15 September 1950, and other ground action until November, when she departed for the west coast and overhaul. 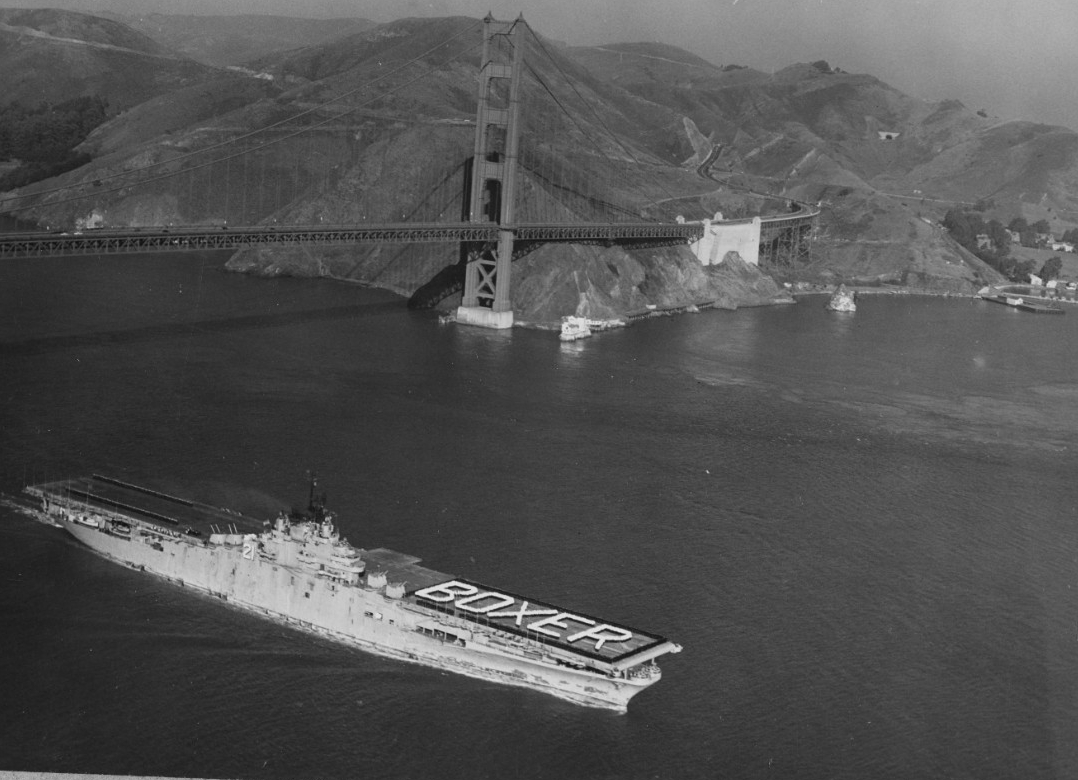 Boxer (CV-21) with her crew spelling out her name on the flight deck, steams past the Golden Gate Bridge into San Francisco Bay as she returned from her first Korean War deployment, November 1950. Official U.S. Navy photograph from the collections of the Naval History and Heritage Command, NH 97282.

Boxer departed San Diego for her second Korean tour on 2 March 1951. Again she operated with TF 77 supporting the ground troops. She returned to San Francisco on 24 October 1951. Sailing on 8 February 1952, for her third tour in Korea, Boxer again served with TF 77. During 23–24 June her planes took part in the heavy strikes against the North Korean hydro-electric complex and on 5 August she had nine men killed and two seriously injured in a fire which swept the hangar deck. After emergency repairs at Yokosuka, Japan (11–23 August), Boxer returned to duty off Korea. She arrived at San Francisco on 25 September and underwent repairs until March 1953.

The carrier departed for the Far East on 30 March 1953 and went into action a month later. She took part in the final actions of the Korean conflict and remained in Asiatic waters until November. Following the end of the Korean fighting, Boxer cruised off the west coast and deployed to the Far East. Boxer was reclassified to an attack aircraft carrier (CVA-21) on 1 on October 1952, and on 15 November 1955, to an antisubmarine warfare support aircraft carrier (CVS-21).

Boxer received eight battle stars for her service off Korea.

Boxer was stricken from the Navy List on 1 December 1969, and also on that date decommissioned.