The Surface Navy is the backbone of America’s Navy and the most capable surface force in the world. Since 13 October 1775, the men, and then later women, of the Surface Navy have deployed around the globe.

Beginning with the six original wooden-hulled, three-masted heavy frigates, of which USS Constitution remains, the surface Navy has utilized a myriad of platforms with propulsion from sails to nuclear power. During the War of 1812, ships of sail, such as frigates, brigs, sloops, and schooners, comprised the U.S. Navy’s first fleet. During the Civil War, the U.S. used primarily sail, but began to experiment with ironclads that were steam propelled. In the 1890s, the “New Navy” transitioned to the building of America’s first cruisers and battleships that used steam as the main source of power. Aircraft carriers took the lead during World War II with battleships used primarily in the bombardment of islands scheduled for amphibious landings. During the 1950s, the development of nuclear-powered ships took prominence. The Vietnam War saw the emergence of the “brown-water navy” that consisted of small gunboats to patrol rivers and waterways. The modern fleet of today consists of nuclear-powered ships and the first electric warships.

Eras of the Surface Navy 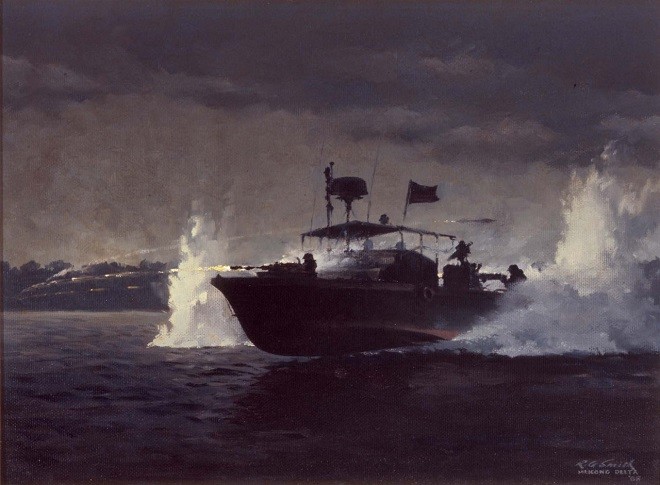 River patrol boats (PBRs) were the backbone of the River Patrol Force. With four man crews, these craft performed most of the inland water patrols in the Mekong Delta. By the end of 1970, when the South Vietnamese navy took over the River Patrol Force, there were almost 300 PBRs in use. Painting, oil on Masonite; by R.G. Smith; 1968; framed dimensions 24H X 30W. Accession #: 88-160-EV.