Mare Island Naval Shipyard in Vallejo, California, was the first Navy base on the West Coast. During World War II, it was to evolve into one of the busiest naval shipyards in the world. In its last 25 years of operation, it was the leading submarine port for the West Coast. More than 500 naval vessels were constructed and thousands more overhauled before the yard closed in 1996.

The island, technically a peninsula, is in the northern San Francisco Bay. On 18 September 1854, it was established to support the naval defense of the new Pacific Coast territories won from Mexico during the Mexican-American War. Commander David Glasgow Farragut oversaw construction of the new naval base and served as its commanding officer from 1854–58. Upon Farragut’s arrival, the yard was virtually uninhabited and consisted of only one house and a few buildings erected by agents of the shipping company that had built the island’s floating dry dock. After five years of operation, the Mare Island yard built its first ship—USS Saginaw. On 3 March 1859, the side-wheel steamer slid down the ways into the Napa River. Saginaw was commissioned on 5 January 1860.

Throughout much of the Civil War, Mare Island’s leadership worried about the safety of the munitions magazine. The magazine was used to supply and store gunpowder and ammunition for the ships of the Pacific Squadron. Captain William H. Gardner, the island’s commanding officer, received word that schemes to blow up the island’s magazine were being circulated by Confederate sympathizers in the area. This led to Washington sending a company of Marines to the island to guard the base, and “the powder,” in the fall of 1862.

During the conflict, Mare Island repaired several of the worn-out Pacific Squadron ships that had been assigned to hunt for Confederate raiders and privateers. Twice a month, one of the squadron’s ships would escort mail steamers laden with gold as they sailed from San Francisco to Panama. After serving in the East India Squadron for two years, Saginaw was one of the vessels that joined the ships of the Pacific Squadron in hunting privateers up and down the California coast, Mexico, and Central America. 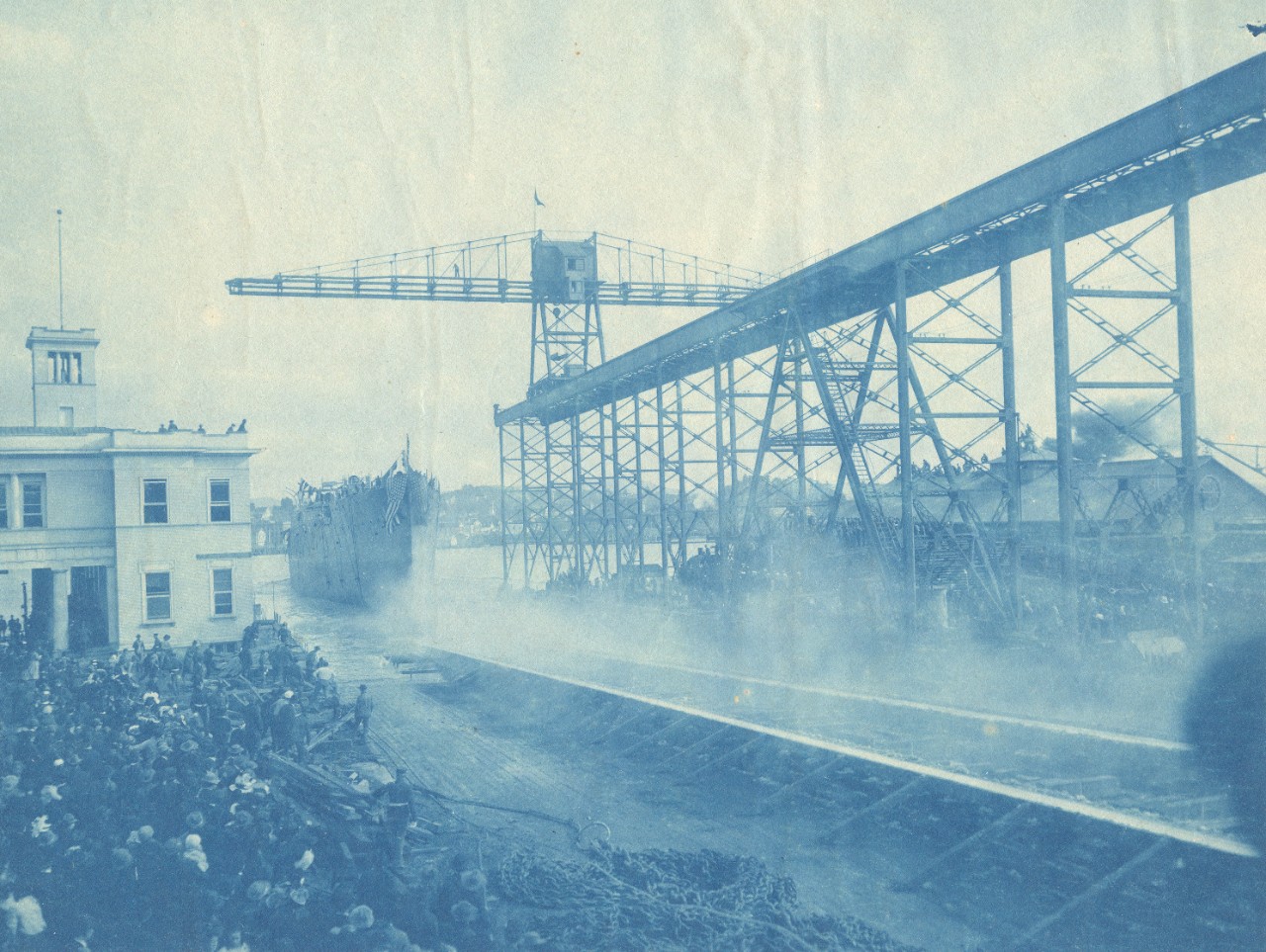 Cyanotype photo of a ship launch in the early 20th century at Mare Island Naval Shipyard in Vallejo, California (UA 557-14).

An Expanding Navy and World War I

The first years of the twentieth century brought new additions to Mare Island. The Naval Appropriation Act of 1900 made $5,000 available for the construction of a chapel. On 13 October 1901, the gothic-inspired building was named St. Peter’s Chapel, the first naval chapel on the West Coast.

Two of the Navy’s first fleet of six submarines, Grampus (SS-4) and Pike (SS-6), were delivered to Mare Island from Union Iron Works in San Francisco in 1903.  The submarine torpedo boats were only 60 feet long, with an 11-foot beam. Over a three-and-a-half-year period, they operated in a training and experimental capacity in the shallow waters of the San Pablo Bay. Underwater trips were usually no more than a couple hours long. Lieutenant Arthur MacArthur Jr., brother of Army General Douglas MacArthur, was skipper of both submarines. The submarines were decommissioned at Mare Island on 28 November 1906, before being recommissioned in June 1908, and assigned to the Pacific Torpedo Flotilla. In 1911, Grampus was renamed A-3. Pike was renamed A-5. Both submarines were reassigned to the Asiatic Fleet in 1915.

In 1904, Mare Island entered the world of technology with the establishment of the first U.S. Navy radio station on the West Coast. This station, commonly referred to as the “Hill Station” was commissioned 27 April 1904. The original site was located on a hill southward of the shipyard proper. The Mare Island location served as a transmitter station to ships at sea as well as to shore commands in the Pacific. In May 1904, the first radio message transmitted to the Pacific was sent from Mare Island to the hospital ship, USS Solace (AH-2), as she steamed through the Golden Gate.

In 1911, Mare Island became one of the first four recruit training depots for the Marines. From 1917 to 1922, Mare Island served as the only boot camp for Marines west of the Mississippi. It was moved to San Diego in August 1923, but the Marine Barracks remained.

Mare Island gained prominence as a shipbuilding facility during World War I and the years immediately following. The yard built its first destroyer, USS Shaw (Destroyer No. 68), which was launched 9 December 1916 and commissioned on 9 April 1917. In 1918, Mare Island broke records by building USS Ward (Destroyer No. 139) in 17.5 days. The yard set another milestone when it built and launched the first super-dreadnought on the West Coast—USS California (Battleship No. 44). The battleship was launched 21 November 1919 and commissioned two years later. 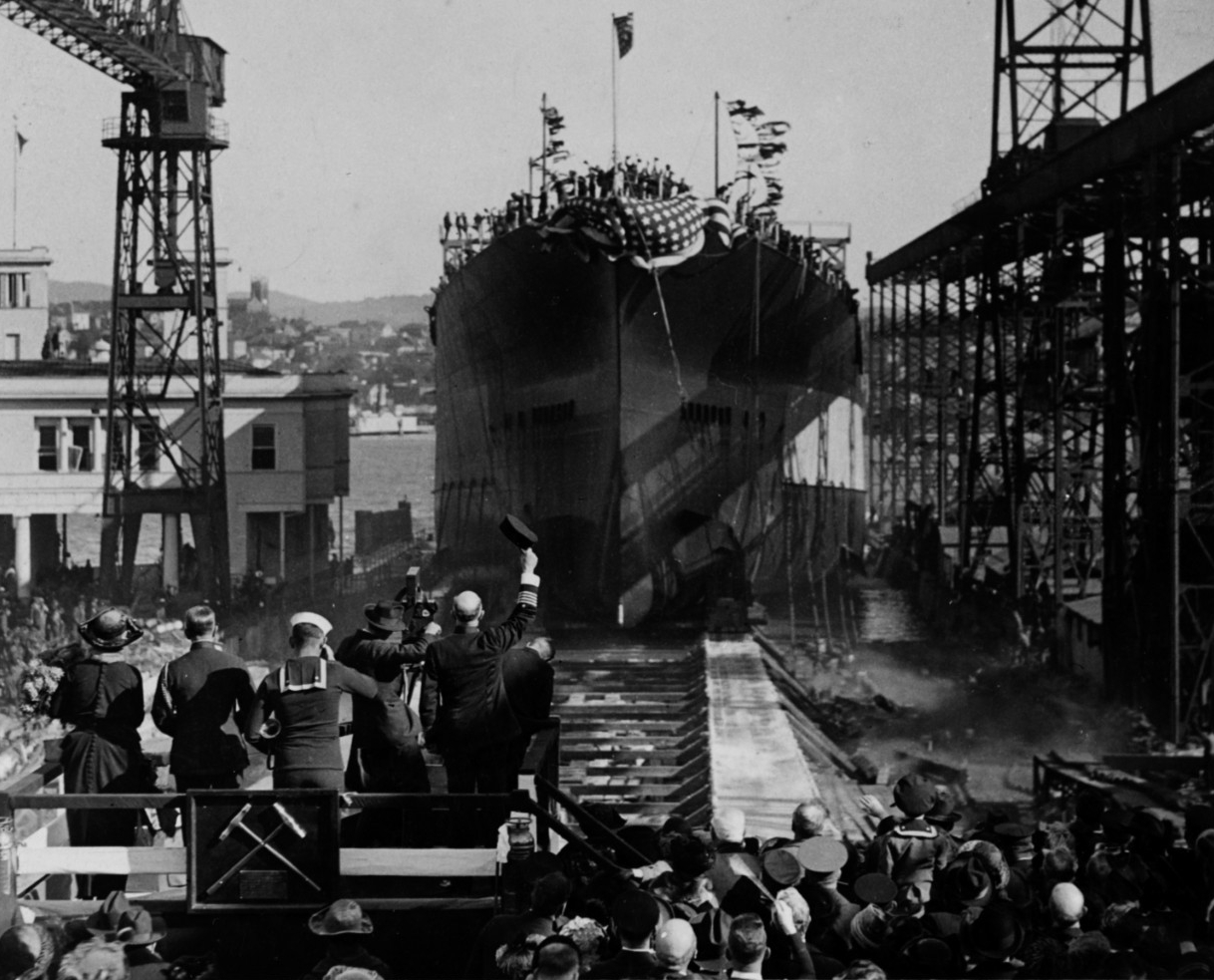 USS California (BB-44) sliding down the building ways during her launching, at the Mare Island Navy Yard, California, 20 November 1919. Note group on the christening stand in the lower right, including the ship's sponsor, Mrs. R. T. Zane (at left), a Navy captain lifting his cover to the ship, a motion picture cameraman, and a Navy bugler (NH 55016).

The base grew into one of the largest naval facilities in the world during World War II. It expanded to 996 buildings, 20 ship berths, four dry docks, and two shipbuilding ways. Yard employees built 391 ships during the war. It repaired and sent back to battle 1,227 ships. More than 39,000 civilians were employed on Mare Island alone and thousands more in uniform. Mare Island also supervised the work of 28 private shipyards with 40,000 Navy contractors in the San Francisco Bay Area. This was in addition to the employees performing ship prefabrication work for Mare Island at shipyards outside of California. In total, more than 100,000 employees were employed on behalf of Mare Island during the war.

This was a busy time for the naval hospital as well. Prior to World War II, the hospital buildings held 600 patients. During the war, they averaged 2,300 patients. Normal staff levels were supplemented by WAVES and Navy nurses. The first enlisted WAVES served as pharmacist’s mates at the hospital.

In August 1943, the Pacific Orthopedic Center was established, charged with fitting all Navy and Marine Corps amputees with prosthetic limbs. The orthopedic department served tens of thousands of disabled military personnel.

On 17 July 1944, a munitions disaster at the Port Chicago annex of the Naval Ammunition Depot resulted in the loss of 320 men and nearly eradicated the small town of Port Chicago. A night crew of mostly African American Sailors were in the process of loading munitions from the pier on to the merchant ship SS E.A. Bryan, when more than 5,000 tons of ammunition blew up—instantly killing all personnel in proximity of the blast. Two ships, most of the pier, and all structures within a 1,000-foot radius disintegrated. A Coast Guard fire barge that had been tied to the pier was blown apart as well, taking its five-man crew with it. More than 250 other personnel at the Port Chicago facility were injured, some seriously. (Read more about the aftermath of this tragedy, the so-called Port Chicago mutiny, here).

After V-J Day, ship production stopped and the work force shrank to pre-war numbers of 12,000 people. The Navy began inactivating ships and sending them to its mothball fleet.

The Shift to Submarines

On 11 May 1965, in an effort to save money and reduce duplication of facilities, the Navy combined Mare Island Naval Shipyard and San Francisco Naval Shipyard (Hunter’s Point) into one command, San Francisco Bay Naval Shipyard. After the eventual realization that the physical distance between the bases was too great, the bases reverted to separate commands in February 1970.

In March 1966, the Navy transferred its riverine training to Mare Island from Naval Amphibious Base Coronado. In 1967, the Navy established the Naval Inshore Operations Training Center (NIOTC) on the island to provide training in river patrol boat operations. With the Napa River on one side and the San Pablo Bay on the other, Mare Island provided access to sloughs and other waterways that were similar to the riverine environment in Vietnam’s Mekong Delta. 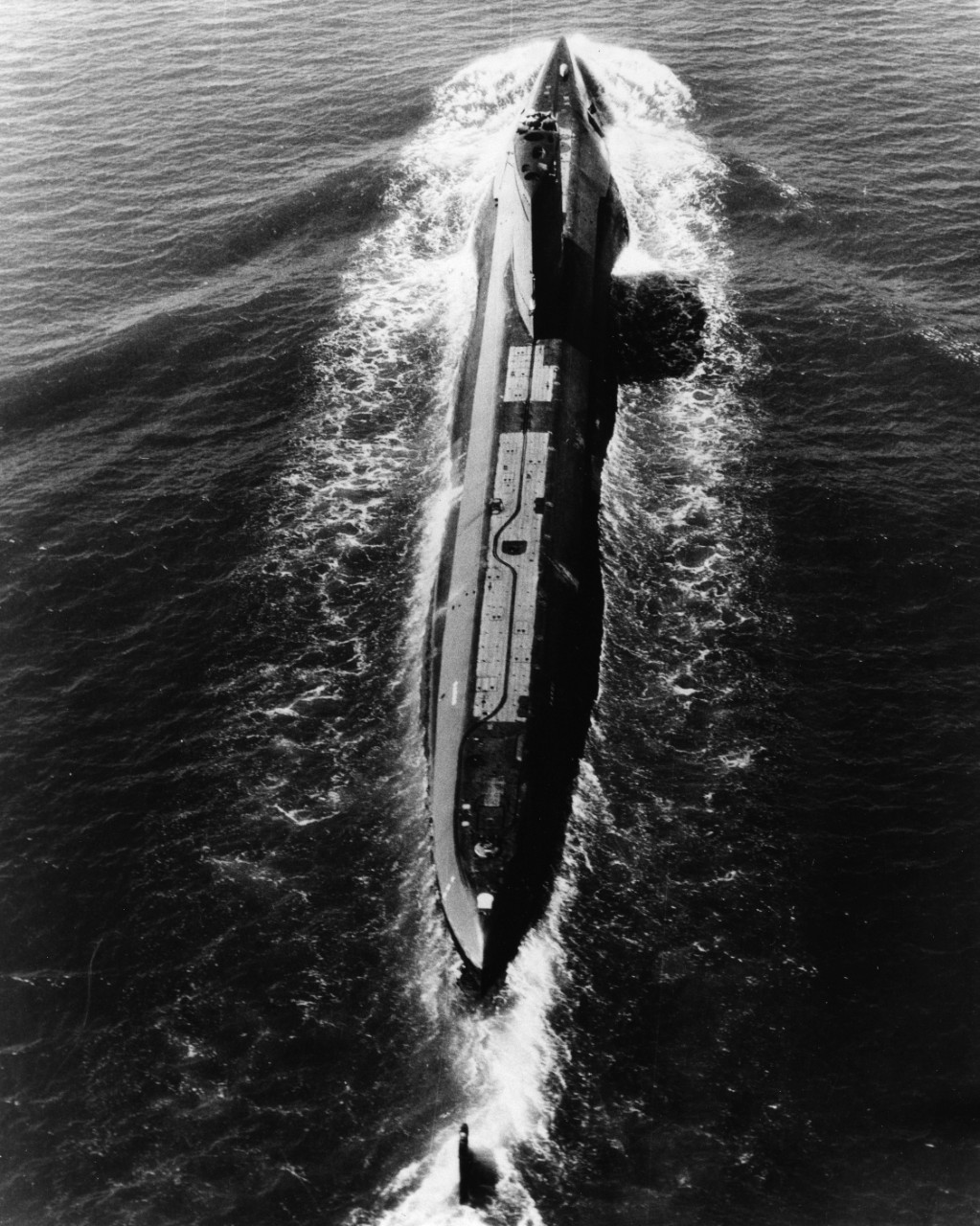 President Clinton and Congress accepted the commission’s recommendations and the base officially closed 31 March 1996. The 5,000-acre island was transferred to the city of Vallejo in 2002 for reuse and redevelopment. The Mare Island Naval Shipyard is now a National Historic Landmark and open to the public. Visitors can view the historic mansions of Officer’s Row, Mare Island Museum, and the chapel. Another historic landmark on base is the Mare Island Naval Cemetery, now under the administration of the U.S. Department of Veterans Affairs. Constructed shortly after the base was established in 1854, it is the oldest military cemetery on the West Coast and the final resting place of 860 veterans, including three Medal of Honor recipients.