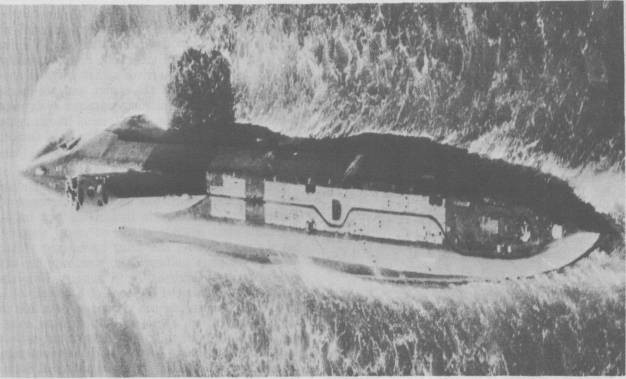 Caption: Sargo (SSN-583) around the time of her commissioning. In general form, she resembles the diesel-electric Tang (SS-563) class; nuclear submarines did not assume their modern fish-like hull form until construction of the Skipjack (SSN-585) class. The narrow line extending along Sargo's deck from bow to stern is a safety track, installed as standard equipment on submarines after seven men were lost from Tusk (SS-426) while rescuing the crew of the sinking Cochino (SS-345) in Arctic waters. When going on deck in heavy weather, crewmen attach a safety line to themselves and clip the other end into the safety track. They can then move freely and still remain safe against mishap.

A food and gamefish of the porgy family, inhabiting coastal waters of the southern United States.

Prior to completion, Sargo was designated for an arctic cruise. She received alterations to strengthen her sail before she left the building yard. Further modifications followed her 19,000-mile Pacific shakedown cruise. And, after her arrival at her home port, Pearl Harbor, on 1 October 1959, scientific instruments were installed to assist her in navigating under the shifting polar ice with its potentially hazardous submerged pressure ridges; in locating open leads and thin ice through which to surface; and in gathering oceanographic and hydrographic data. November and December 1959 brought intensive training programs and the embarkation of scientific specialists; and, on 18 January 1960, Sargo, under the command of Lt. Cmdr. J. H. Nicholson, cleared Pearl Harbor and headed north to make a submerged exploration of the arctic basin.

By the 25th, Sargo had reached the vicinity of St. Matthews Island where she found ice, block and brash, and where, after rendezvousing with the U.S. Coast Guard icebreaker Staten Island, she made her first stationary dive while surrounded by ice. On the 29th, she passed the Diomedes and crossed the Arctic Circle; and, on 9 February, she arrived under the North Pole.

Making her first pass under the pole at 0934, the submarine began a clover leaf search for thin ice and at 1049 she surfaced, according to her log, 25 feet from the pole. Later the same day, the Hawaiian flag was raised at the pole; and, on the morning of the 10th, Sargo submerged and set a course for the Canadian Archipelago and a rendezvous with ice island T-3.

Collecting hydrographic data as she progressed, she reached T-3 on the 17th. Thence, after conducting tests in cooperation with scientists on the ice island, she got underway for the Bering Straits, the Aleutians, and Hawaii. On 3 March 1960, Sargo, having covered over 11,000 miles, 6,003 under ice, returned to Pearl Harbor with new data on arctic ice, arctic waters, and the physiography of the Arctic Basin. The latter included information on Alpha Ridge and on the presence of deep water areas at the western end of the northwest passage.

Repairs took Sargo into April. At the end of that month, she resumed operations in the Hawaiian area with a demonstration cruise for the King of Nepal. On 14 June, an explosion and fire in the stern room, while the submarine was charging her oxygen tanks from the dock, killed one crew member and put her back in the shipyard for the remainder of the summer. From October through December, she again conducted type training exercises.

With 1961, however, Sargo assumed a more regular schedule. On 19 January, she sailed for the Philippines on her first deployment with the 7th Fleet. In the western Pacific into May, she participated in exercises to enhance the antisubmarine warfare readiness of hunter-killer groups and visited Sydney, Australia, for the 19th Annual Coral Sea Celebration. On 25 May, she returned to Pearl Harbor. Upkeep and local operations took her into late July, when she began a two-month training cruise. In November, she moved east, to California, to participate in a demonstration for the Chief of Naval Operations and foreign attaches. She then returned to Pearl Harbor for holiday leave and upkeep. During the late winter and early spring of 1962, Sargo made another extended cruise in the western Pacific.

Local operations and upkeep followed her return to Pearl Harbor; and, in July, she entered the naval shipyard there for an overhaul which lasted through the winter of 1962 and 1963. During the work, she became the first nuclear ship to be refueled at that shipyard. In mid-summer 1963, she commenced an extended cruise to the western Pacific; and, in October, she returned to Hawaii for six months of local operations.

From April to October 1964, Sargo once again deployed to the western Pacific; and, during August, she was called on to support operations resulting from the Gulf of Tonkin incident. After her return to Hawaii, local operations and upkeep took her into the next year. In April 1965, she commenced another cruise in the western Pacific; and, in June, she resumed operations in the eastern Pacific. Five months later, she again moved westward across the Pacific; and, in February 1966, she returned to Hawaii to enter the naval shipyard at Pearl Harbor where she remained for the next two years, undergoing overhaul and refueling.

On 5 April 1968, Sargo left the shipyard. She had been overhauled and her third reactor core had been installed. Refresher training followed; and, in June, she resumed her previous schedule with an extended cruise in the western Pacific. Since that time, into 1974, she has maintained a schedule of eastern and western Pacific cruises and training operations, including joint British, Australian, and American exercises in the South China Sea in January 1969.

Ultimately decommissioned on 26 February 1988, Sargo was stricken from the Naval Vessel Register on 21 April 1988 and classified as disposed of, by submarine recycling, on 5 April 1995.