The Navy at San Pedro 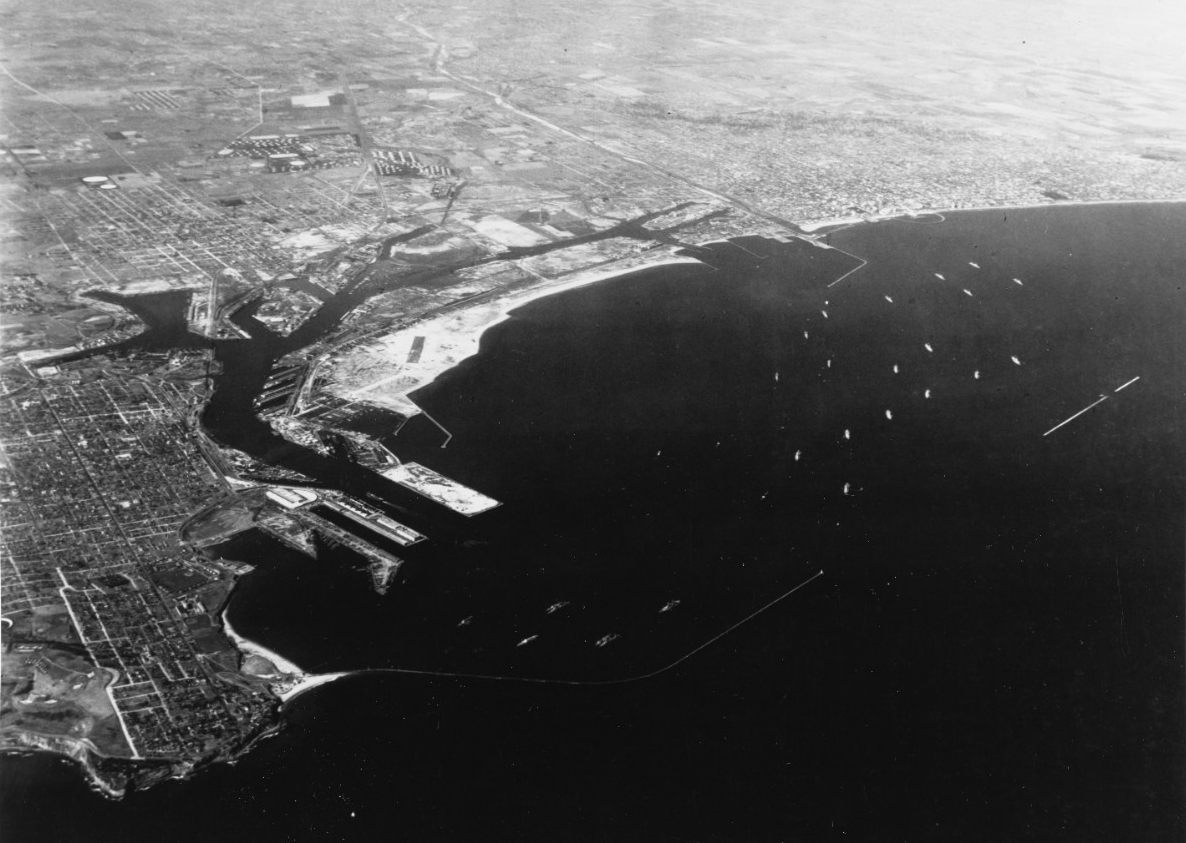 Battleships, cruisers, and auxiliaries of the U.S. fleet moored inside the Los Angeles harbor breakwaters, 24 April 1935, just before the start of Fleet Problem XVI. Coast defense gun positions in lower left are at Fort MacArthur, San Pedro is at left, Wilmington is in upper left center and Long Beach is in upper right center (80-G-416381).

In 1919, amid tensions between the United States and Japan in the Far East, the U.S. Navy reorganized its fleet. The newest battleships were transferred to the U.S. Battle Force in the Pacific while the older battleships became part of the Scouting Force in the Atlantic. Admiral Hugh Rodman, commander-in-chief of the U.S. Pacific fleet, brought his battleships to the port of San Pedro, in the Los Angeles, California, harbor. San Pedro was chosen over San Diego because the San Diego harbor was considered too shallow for the large ships. The San Pedro port had 600–700 acres of anchorage space, some of which was 40 feet deep. The Army Corps of Engineers had dredged the Los Angeles harbor in 1898 and constructed a 2.11-mile-breakwater on the San Pedro side of the bay.

The San Pedro Bay was also the home of the Pacific Torpedo Flotilla, which had been unofficially operating there since 1913. San Pedro Submarine Base was established in 1917 to provide coastal defense during World War I. The submarines of the 1st Submarine Group, Pacific Torpedo Flotilla, were first to arrive there in 1913, along with the submarine tender, USS Cheyenne (Monitor No. 10) and USS Alert (AS-4). The tenders provided temporary berthing and messing for the crews of the submarines. The 2nd Torpedo Flotilla, Pacific Fleet, also operated out of the base. The San Pedro Submarine Base worked closely with the Pacific Fleet battleships, supporting them as necessary, until the base closed in 1923.

Some Navy leaders were not happy about the decision to base the dreadnought-type battleships in the Los Angeles harbor. They preferred the battleships be homeported at a larger operating base in the San Francisco Bay or Puget Sound. Their main objection was that San Pedro’s deep- water anchorages were exposed to the open sea and vulnerable to attack by a hostile fleet. The Chief of Naval Operations, Admiral Robert Coontz, disputed this argument and directed that the fleet remain at San Pedro.

The carriers USS Lexington (CV-2) and USS Saratoga (CV-3) arrived in San Pedro Bay in the late 1920s. In early 1932, heavy cruisers from the Atlantic-based Scouting Force joined the rest of the fleet in the San Pedro Bay and remained there. By 1934, the overcrowded San Pedro Bay included 16 battleships and carriers, 14 cruisers, and 16 support ships.  A total of 31,286 Navy personnel manned these ships. 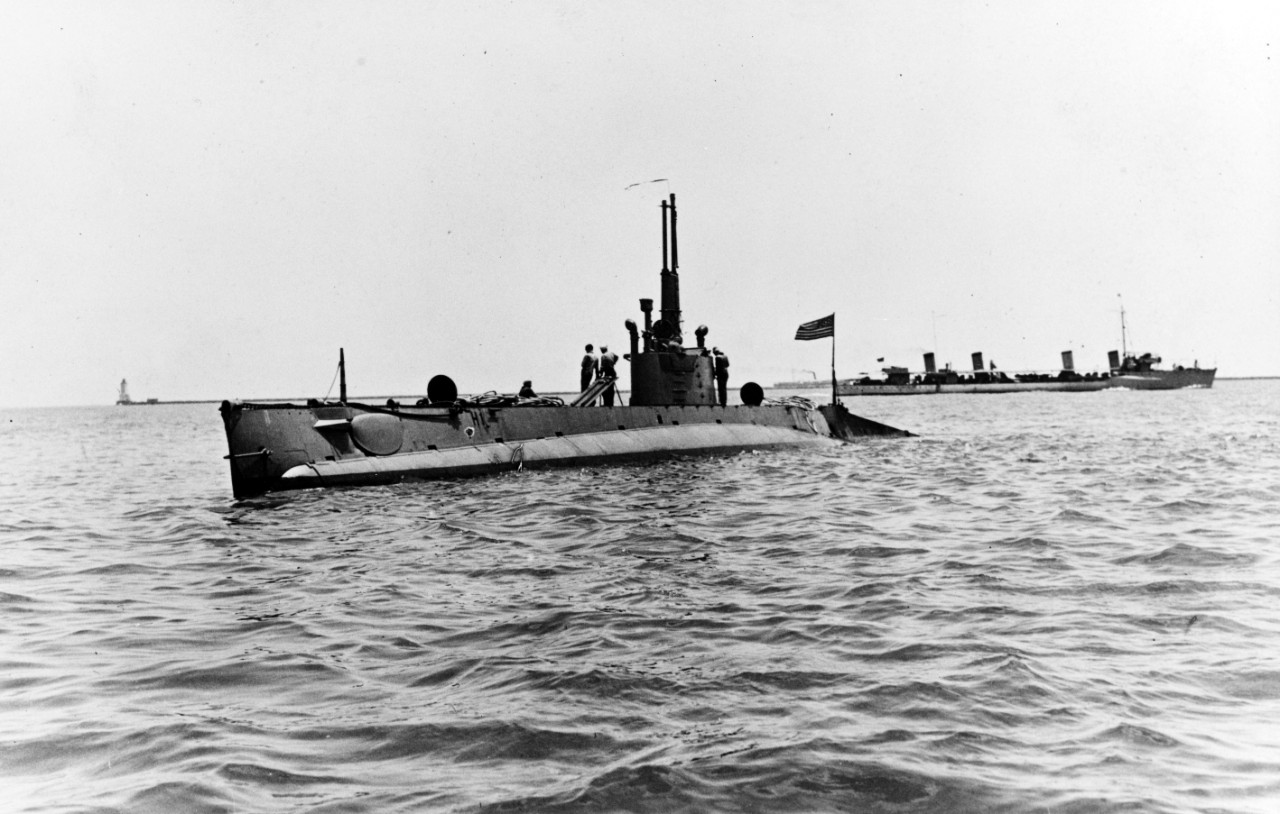 Although San Pedro was the homeport for the battleships of the Pacific Fleet, the area lacked permanent shore facilities to support them. The Battle Force relied on repair ships like the Procyon (AG-11) to render minor repairs, but for larger repairs they had to go to other West Coast shipyards. In 1935, Rep. Charles J. Colden, of San Pedro, in an effort to keep the Pacific Fleet in his district, fought to secure local funds for a harbor improvement project, which included a graving dock, but the city voted it down. When Colden appealed to the House Naval Affairs Committee, he was rebuffed by the Chief of the Bureau of Navigation, Rear Admiral William D. Leahy, who said, “The Navy does not need a navy yard at San Pedro at the present time.”

In 1940, the city of Long Beach ceded 109 acres of land on Terminal Island for Navy use. Construction began on a Navy shipyard and an operating base at Terminal Island. The shipyard was initially named U.S. Naval Dry Docks, but was later renamed Long Beach Naval Shipyard. It included a dry dock and all machinery and facilities needed to perform routine and battle-damage repairs to ships.

On 1 April 1940, the battleships and cruisers in San Pedro left the harbor for training exercises off the Hawaiian islands. Upon arrival, President Theodore Roosevelt ordered the fleet to remain at Pearl Harbor to serve as a deterrent to the Japanese in the Western Pacific. When Pearl Harbor was attacked on 7 December 1941, seven of the battleships formerly homeported in San Pedro Bay weren’t present. Eight Pacific fleet battleships (Arizona, California, Maryland, Nevada, Oklahoma, Tennessee, West Virginia, and Pennsylvania) were at Pearl Harbor and absorbed the brunt of the Japanese attack. Of these eight, three sank, one capsized, and four suffered varying degrees of damage. 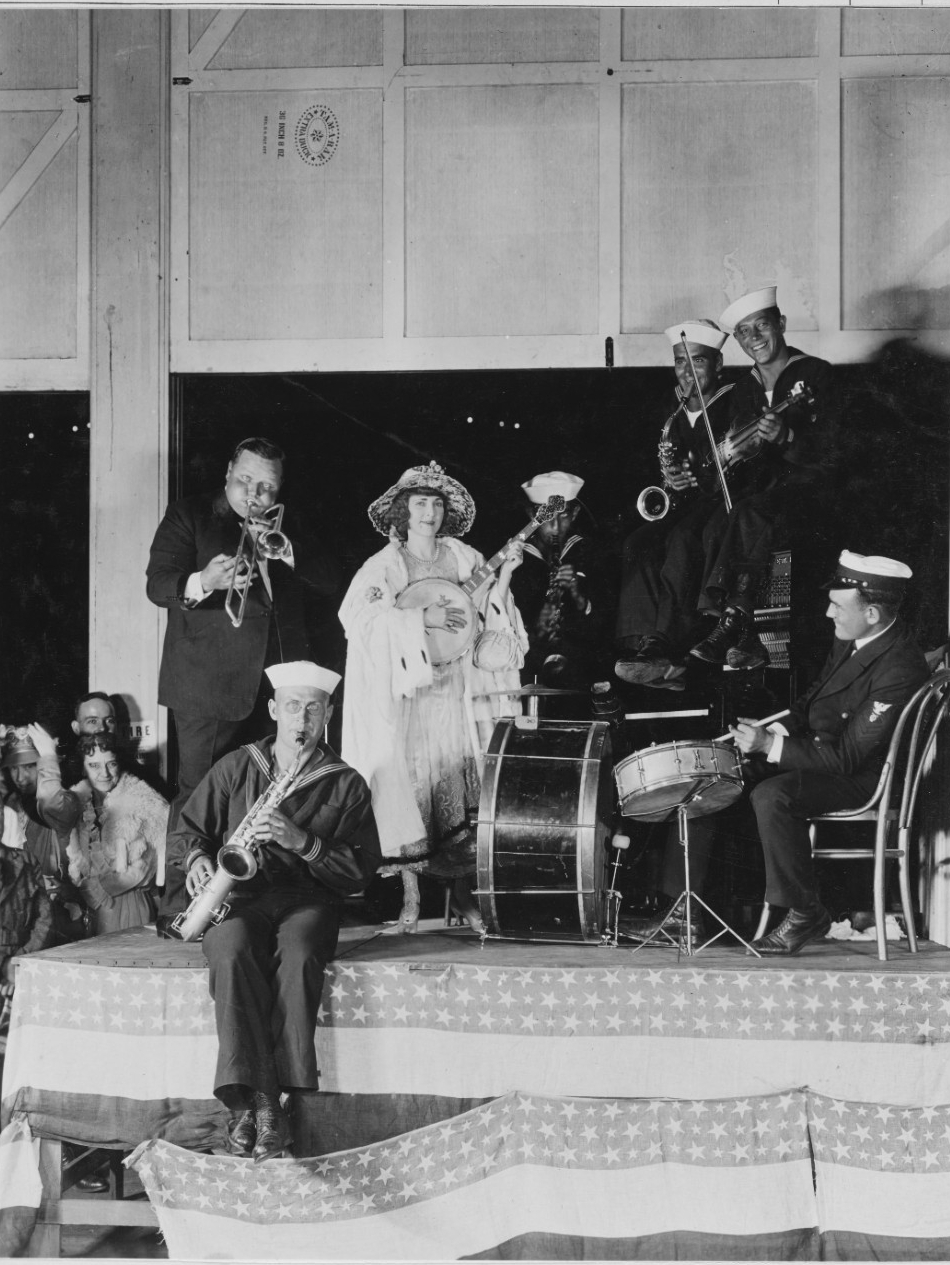 Stage and silent movie stars Fatty Arbuckle and Fanny Ward with Navy musicians at the San Pedro Submarine Base, circa 1920 (NH 122967).

In the late 1920s, the U.S. Naval Reserve began training pilots on Allen Field, a civilian airfield located on Terminal Island. In 1935, the Navy leased Allen Field from the city of Los Angeles and renamed it Reeves Field, after the Commander-in Chief of the U.S. Fleet, Admiral Joseph M. Reeves. In 1936, Reeves Field was renamed Naval Air Base (NAB) San Pedro.

The base included a seaplane ramp and anchorage. The seaplane ramp, and the base’s location on the shorefront, led to it becoming a primary operating base for seaplanes assigned to the Pacific Fleet. The base serviced seaplanes attached to battleships and cruisers as well as land-based planes. In 1939, the station began overhauling all Navy planes associated with Navy ships in the Los Angeles and Long Beach area, while still continuing to serve as a training base for pilots.

In October 1941, months before the United States entered the war, NAB San Pedro began serving as an aircraft delivery depot, where new Navy aircraft produced at nearby plants owned by the Lockheed, Douglas, and Vultee aircraft companies were received. Navy personnel inspected, flight-tested, and equipped the planes with communications gear and armed them for combat. The aircraft were then ferried out to various locations or loaded aboard small aircraft carriers and other ships.

On the day after Pearl Harbor, 8 December 1941, Terminal Island became one of the few places in the continental United States where martial law was declared during World War II. This was due to the sizeable community of Japanese that lived there. More than 3,000 Japanese lived and worked on the island in an area called East San Pedro, or “Fish Island.” Many worked as commercial tuna fishermen for the local canneries. Immediately following the Pearl Harbor attack, the Federal Bureau of Investigation (FBI) began conducting raids in the island’s Japanese community, taking into custody Japanese who they considered “dangerous aliens,” and shipping them to internment camps in North Dakota and Montana. Eventually, all Japanese males on the island were shipped to internment camps. Women and minor children remained behind, but by the end of February 1942, all were forced to evacuate the island by the Navy. Women and children were sent to relocation camps, where they were eventually joined by the men. 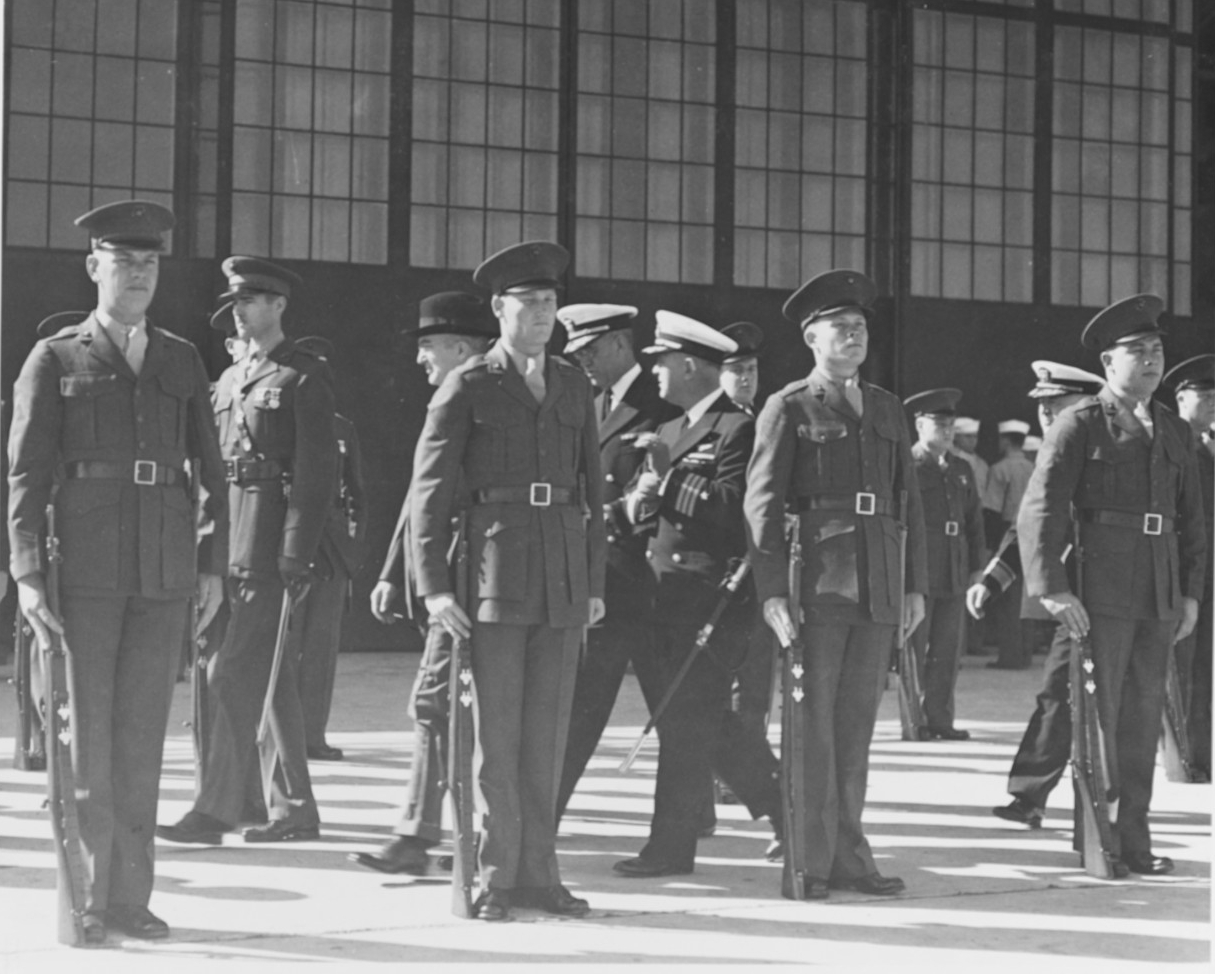 During the war, construction continued on the new Long Beach naval base. In May 1941, the naval complex was designated Roosevelt Base, Terminal Island, California. It was renamed Naval Station Long Beach on 15 November 1946. The base included the shipyard and its facilities, a Marine barracks, fuel storage facilities, a net depot, ammunition depot, hospital, prison, degaussing range, radio station, messing and recreational facilities, schools and barracks for enlisted and officers.

An estimated 200 Women Accepted for Volunteer Emergency Services (WAVES) worked on Terminal Island during World War II. In 1942, Navy Captain Joy Bright Hancock’s efforts in expanding opportunities for females in the Navy opened up aviation careers to women. WAVES served as air traffic controllers, air and radio navigators, and mechanics. Many of them went on to train their male counterparts in aerial navigation. They also played a key role in the Naval Air Transport Service, which began operating on the island in June 1942.

In 1947, NAS Terminal Island was disestablished, although Long Beach Naval Station continued to use Reeves Field as an auxiliary airfield until the late 1990s. The Long Beach facilities were closed on 30 September 1997.