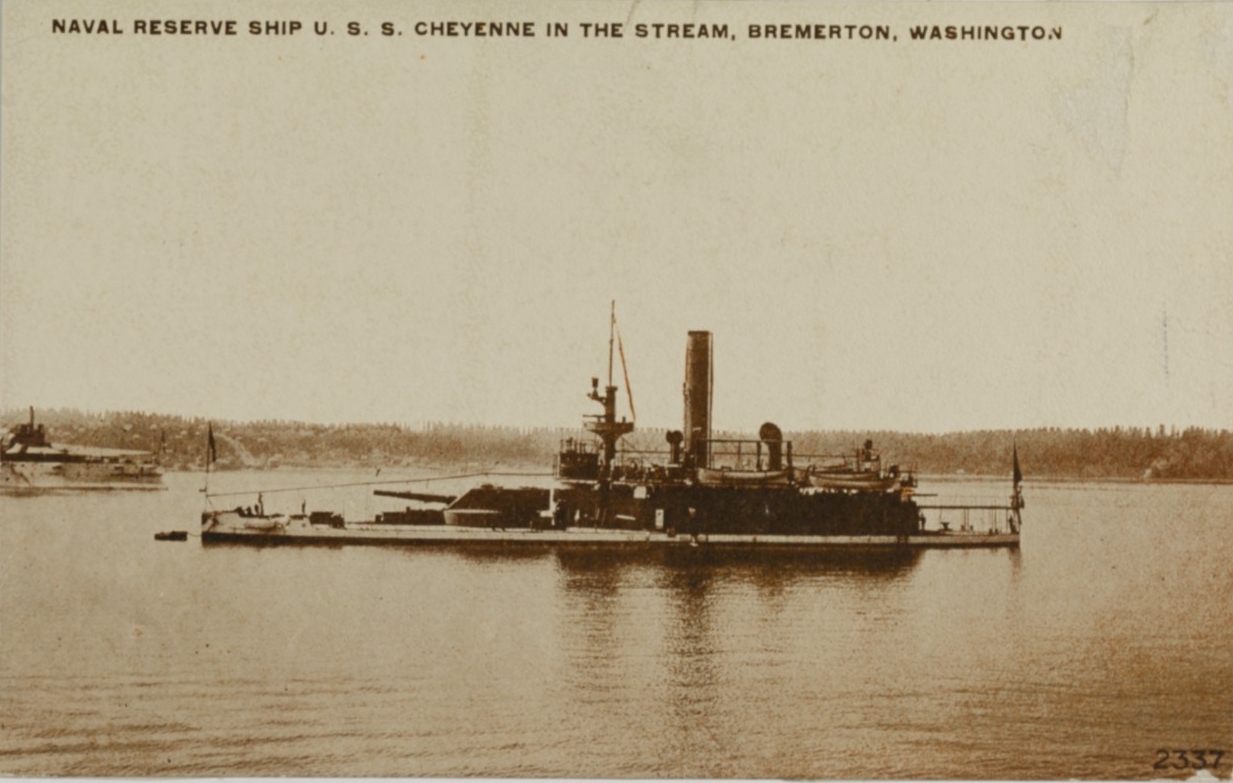 Cheyenne (Monitor No. 10) moored off Bremerton, Washington, while serving as a training ship for the Washington State Naval Militia, circa 1910-1913. The original is a screened sepia-toned image, printed on a contempory postal card. U.S. Naval History and Heritage Command photograph, NH 55116-KN.

The second U.S. Navy ship named for the capital of Wyoming.

The second Cheyenne (Monitor No. 10) was launched as Wyoming on 8 September 1900 by Union Iron Works, San Francisco, Calif.; sponsored by Mrs. H. W. Pershing, daughter of the Senator from Wyoming; and commissioned pn 8 December 1902, Cmdr. V. L. Cottman in command.

Between December 1902 and August 1905 Wyoming cruised along the Pacific coast of the United States, Panama, and Mexico, participating in fleet maneuvers, ceremonies, and exercises. She was out of commission at Mare Island between 29 August 1905 and 8 October 1908.

During her next commissioned service from 8 October 1908 to 13 November 1909, she was renamed Cheyenne (1 January 1909) and engaged in testing the new oil-burning equipment which was making its appearance in the Navy. After another period of inactivity, the monitor was recommissioned 11 July 1910 at Mare Island and steamed to Bremerton, Wash., arriving 26 July, for operations with the Washington State Naval Militia. Between February and August 1913 she was out of commission at Bremeton, undergoing conversion to a submarine tender.

She was recommissioned 20 August 1913 and reported as tender to the 2d Division, Pacific Torpedo Flotilla, with which she remained until 1917. During this time she assisted in the evacuation of refugees from Ensenada and San Quentin, Mexico (24 April-17 May 1914), and tended submarines along the west coast.

On 7 June 1917 she arrived at San Pedro, Calif., and assisted in establishing a submarine base and training camp for submarine personnel. In the fall of 1917 she transited the Panama Canal and reported as flagship and tender to the 3d Division, Submarine Force, Atlantic Fleet. On 17 December 1917 she was detached from the 3d Division and reported to the 1st Division, American Patrol Force. Between 15 January and 9 October 1919 she was stationed off Tampico, Mexico, for the protection of American interests.

Between 23 October 1919 and 22 September 1920 Cheyenne was out of commission at Philadelphia and then reported to Baltimore where she served as station ship for training Naval Reservists. On 21 January 1926 the monitor was towed from Baltimore to Philadelphia where she was decommissioned 1 June 1926 and sold 20 April 1939.

The name Cheyenne was assigned to CL-117, but the contract with Newport News Shipbuilding and Dry Dock Co., Newport News, Va., was canceled 12 August 1945.