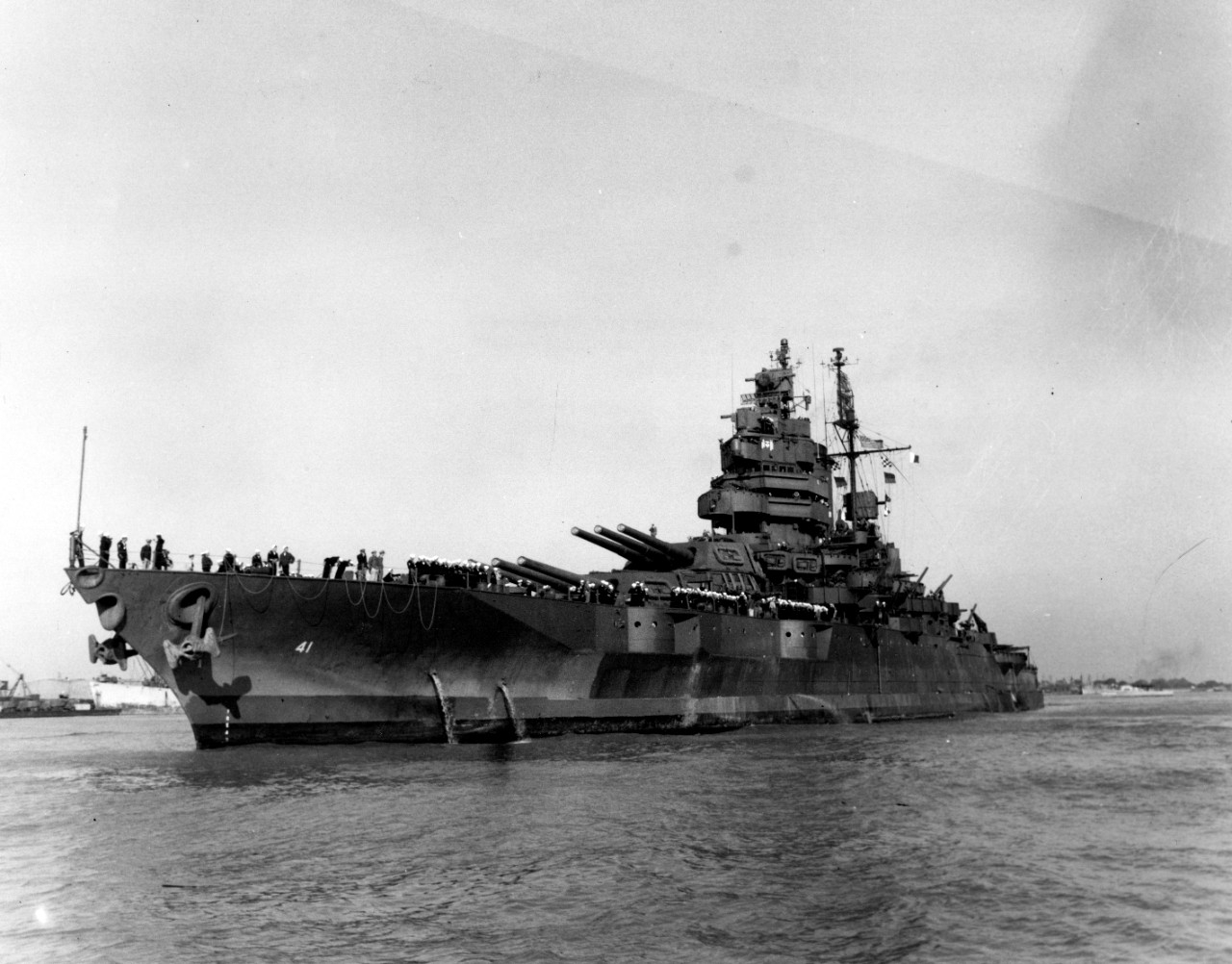 Mississippi (BB-41) in the Mississippi River, en route to take part in Navy Day celebrations at New Orleans, Louisiana, 16 October 1945. Note her anchors suspended below their normal stowed position at the bow. Photograph from the Army Signal Corps Collection in the U.S. National Archives, SC 215864.

The first Mississippi was named for the Mississippi River; succeeding ones for the 20th State, admitted to the Union 10 December 1817.

Following exercises off Virginia, Mississippi steamed 22 March 1918 for training in the Gulf of Guacanayabo, Cuba. One month later she returned to Hampton Roads and cruised between Boston and New York until departing for winter maneuvers in the Caribbean 31 January 1919. On 19 July she left the Atlantic seaboard and sailed for the west coast. Arriving at her new base, San Pedro, she operated along the west coast for the next 4 years, entering the Caribbean during the winter months for training exercises.

During gunnery practice on 12 June 1924 off San Pedro, 48 of her men were asphyxiated as a result of an explosion in her No. 2 main battery turret. On 15 April 1925 she sailed from San Francisco for war games off Hawaii, and then steamed to Australia on a good will tour. She returned to the west coast 26 September, and resumed operations there for the next 6 years. During this period she frequently sailed into Caribbean and Atlantic waters for exercises during the winter months.

Mississippi entered Norfolk Navy Yard 30 March 1931 for a modernization overhaul, departing once again on training exercises in September 1933. Transiting the Panama Canal 24 October 1934, she steamed back to her base at San Pedro. For the next 7 years she operated off the west coast, except for winter Caribbean cruises.

Returning to Norfolk 15 June 1941, she prepared for patrol service in the North Atlantic. Steaming from Newport, R.I., she escorted a convoy to Hvalfjordur, Iceland. She made another trip to Iceland 28 September 1941, and spent the next 2 month there protecting shipping. 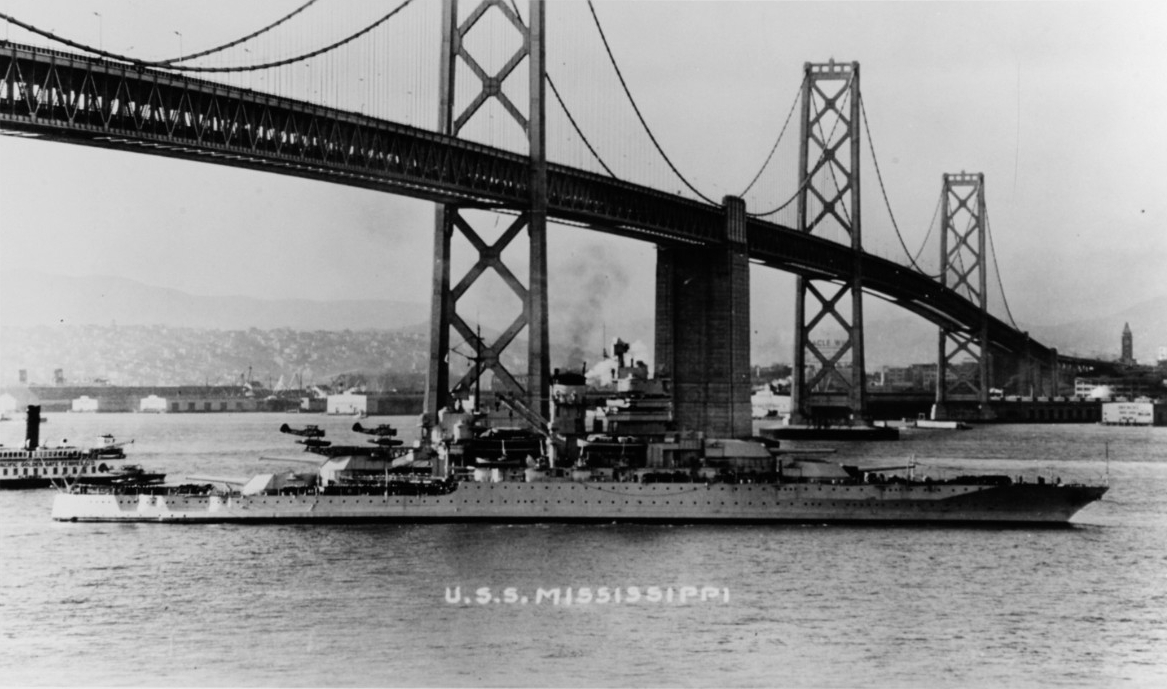 Two days after the treacherous attack on Pearl Harbor, Mississippi left Iceland for the Pacific. Arriving 22 January 1942 at San Francisco, she spent the next 7 months training and escorting convoys along the coast on 6 December, after participating in exercises off Hawaii, she steamed with troop transports to the Fiji Islands, returning to Pearl Harbor 2 March 1943. On 10 May she sailed from Pearl Harbor to participate in a move to restore the Aleutians to their rightful possessors. Kiska Island was shelled 22 July, and a few days later the Japanese withdrew. After overhaul at San Francisco. Mississippi sailed from San Pedro 19 October to take part in the invasion of the Gilbert Islands. While bombarding Makin 20 November, a turret explosion, almost identical to the earlier tragedy, killed 43 men.

On 31 January 1944 she took part in the Marshall Islands campaign, shelling Kwajalein. She bombarded Taroa 20 February, and struck Wotje the next day. On 15 March she pounded Kavieng, New Ireland. Due for an overhaul, she spent the summer months at Puget Sound.

Returning to the war zone, Mississippi supported landings on Peleliu, in the Palau Islands, on 12 September. After a week of continuous operations she steamed to Manus, where she remained until 12 October. Departing Manus, she assisted in the liberation of the Philippines, shelling the east coast of Leyte on 19 October. On the night of the 24th, as part of Admiral Oldendorf's battleline, she helped to destroy a powerful Japanese task force at the Battle of Suriago Strait. As a result of the engagements at Leyte Gulf, the Japanese navy was no longer able to mount any serious offensive threat.

Mississippi continued to support the operations at Leyte Gulf until 16 November, when she steamed to the Admiralty Islands. She then entered San Pedro Bay, Leyte, 28 December, to prepare for the landings on Luzon. On 6 January 1945 she began bombarding in Lingayan Gulf. Despite damages near her waterline received from the crash of a suicide plane, she supported the invasion forces until 10 February. Following repairs at Pearl Harbor, she sailed to Nakagusuku Wan, Okinawa, arriving 6 May to support the landing forces there. Her powerful guns leveled the defenses at Shuri Castle, which had stalled the entire offensive. On 5 June, a kamikaze crashed into her starboard side, but the fighting ship continued to support the troops at Okinawa until 16 June.

After the announced surrender of Japan, Mississippi steamed to Sagami Wan, Honshu, arriving 27 August as part of the support occupation force. She anchored in Tokyo Bay, witnessed the signing of the surrender documents, and steamed for home on 6 September. She arrived 27 November at Norfolk, where she underwent conversion to AG‑128, effective 15 February 1946. As part of the operational development force, she spent the last 10 years of her career carrying out investigations of gunnery problems and testing new weapons, while based at Norfolk. She helped launch the Navy into the age of the guided‑missile warship when she successfully test fired the Terrier missile on 28 January 1953 off Cape Cod. She also assisted in the final evaluation of the Petrel, a radar‑homing missile, in February 1956.

Mississippi decommissioned at Norfolk 17 September 1956, and was sold for scrapping to the Bethlehem Steel Co., on 28 November, the same year.