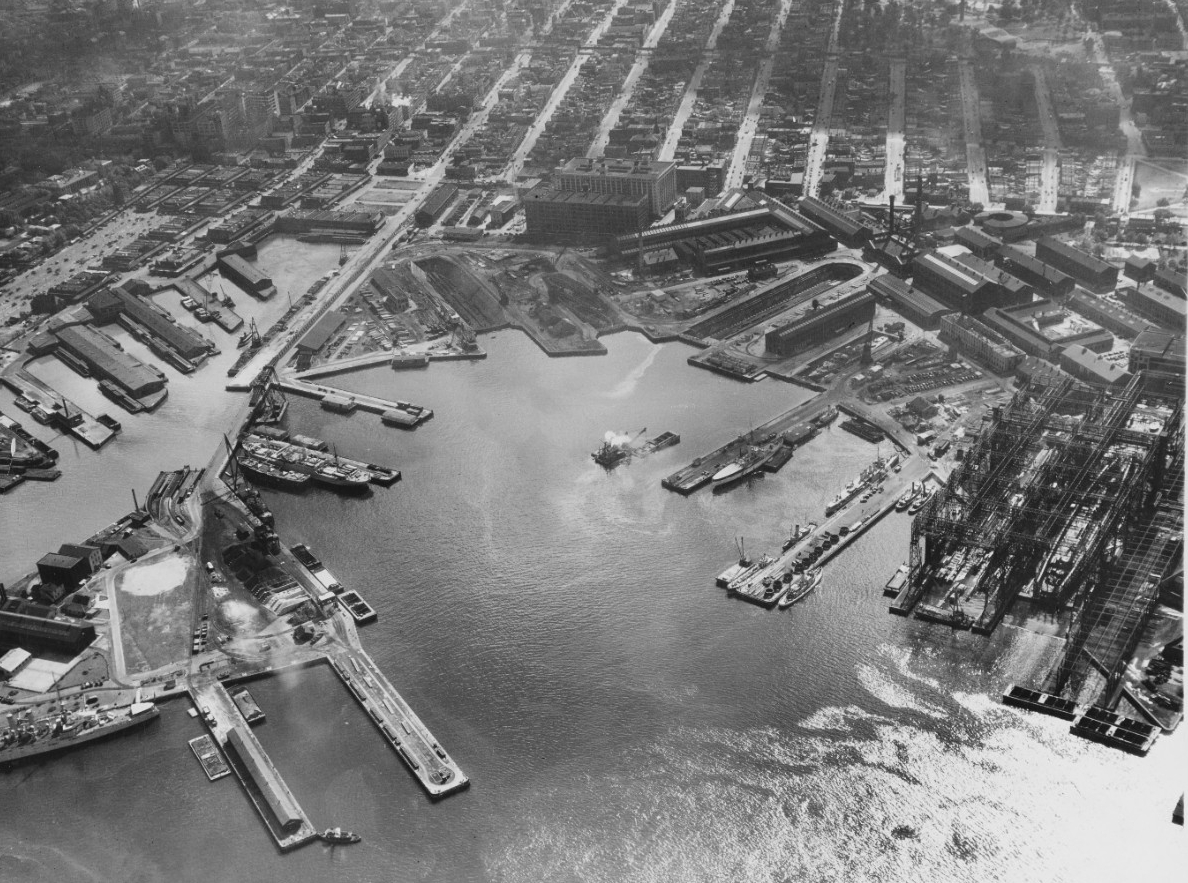 During the American Revolution, British forces occupying New York City moored their prison ships containing American prisoners of war in Wallabout Bay, near the Brooklyn waterfront. Less than 20 years later, on 23 February 1801, the federal government purchased 41.93 acres of waterfront land in this same area of Wallabout Bay for $40,000. It contained an operational private shipyard, with a beach, waterfront, and a channel that was 36 feet deep and 100 yards wide. It was to be the location of a future navy yard, the first of six established by Secretary of the Navy Benjamin Stoddert during the administration of President John Adams.

New York Navy Yard, or Brooklyn Navy Yard, as locals called it, operated for 165 years. The yard built 160 ships, including the Civil War–era ironclad, USS Monitor, and the historic battleships USS Arizona (Battleship No. 39, later BB-30) and USS Missouri (BB-63). It also grew to be New York City’s largest single industrial employer until its closing in 1966.

After President Adams left office, the yard remained inactive for its first four years of existence. In 1805, the first six buildings were built. In 1806, New York Navy Yard received its first commandant, Lieutenant Jonathan Thorn. That same year, the commandant’s house (Quarters A) was completed. The now privately owned building is still standing today and is a National Historic Landmark.

During the War of 1812, the yard saw considerable activity, fitting out more than 100 ships for war.

In 1820, New York Navy Yard built its first ship, USS Ohio. After launching, the ship-of-the-line went into ordinary and decayed badly. In 1838, Ohio was refitted for service and joined the Navy’s Mediterranean Squadron. Serving as a flagship for two years, Ohio protected commerce and conducted anti–slave trade patrols off the coast of West Africa.

In 1833, Commodore Matthew C. Perry and other young naval officers founded the U.S. Naval Lyceum in Building 1 of the New York Navy Yard. The Naval Lyceum was a professional military organization that also served as a center of learning. It was a place of self-directed study that included a library with more than 5,000 volumes, and a museum collection of artifacts and antiquities. The organization published the first U.S. naval publication, the Naval Magazine, in 1836. After the organization was disbanded in 1889, the library books and 254 specimens from the museum were donated to the Naval Academy.

From 1837–50, New York Navy Yard launched four sloops of war, in addition to the steam frigate USS Missouri and the brig USS Somers.

A mutiny occurred on board Somers after she left the New York Navy Yard on 13 September 1842. Somers served as a school ship for the training of teenage naval apprentice volunteers. During a voyage to St. Thomas in the Virgin Islands, officers noticed a “steady worsening of morale,” among the crew. On 26 November 1842, the ship’s commanding officer, Commander Alexander Mackenzie, arrested 19-year-old Midshipman Philip Spencer—son of the Secretary of War John Spencer—for inciting mutiny. Boatswain’s Mate Samuel Cromwell and Seaman Elisha Small were also arrested. An investigation revealed the three were plotting to take over the ship, murder the commander and officers, and then use Somers for piracy. All three of the accused were found guilty of mutiny and hanged.

A naval court of inquiry into the mutiny and execution was conducted upon the ship’s return to New York. Mackenzie was exonerated, but the incident cast doubt on the practice of sending midshipmen to sea without prior education and naval institutional experience. It became a catalyst for the 1845 founding of the U.S. Naval Academy.

In 1851, Dry Dock No. 1 was completed. The project took ten years to finish at a cost of $2,113,173. The granite dry dock has 36-foot-deep walls built on piles driven 40 feet into the earth. It was built using a steam-powered pile driver and 23,000 cubic yards of granite. Five more dry docks were to follow.

During the Civil War, the New York Navy Yard had become a major shipbuilder and outfitter of ships for the conflict. When the war began, there were 1,650 men employed at the shipyard. At the war’s end, nearly 6,000 civilian workers were on the payroll. Workers built 16 new warships and converted 416 commercial ships into warships during the four years of war.

On 19 February 1862, the Union Navy’s first ironclad, USS Monitor, arrived at New York Navy Yard. Although it was built at Continental Iron Works in the Greenpoint neighborhood of Brooklyn, it was completed, outfitted, armed, crewed, and commissioned at the New York Navy Yard. On 9 March 1862, Monitor departed New York for Hampton Roads, Virginia, where the Union Navy had established a blockade. A day before, the Confederate’s iron-sided ram, CSS Virginia, had arrived and attacked the wooden-hulled Union warships that were blockading Norfolk, sinking two of them. In the Battle of Hampton Roads, Monitor faced off against Virginia. After a four-hour duel in which neither caused significant damage to the other, fighting came to a standstill. Virginia retired to Sewell’s Point after failing to break through the Federal blockade. The effect of the battle was far-reaching. Navies worldwide took note and many shipyards began an immediate transition from wood to iron shipbuilding.

In 1890, the shipyard launched the armored second-class battleship USS Maine. It was the first armored battleship built entirely of domestically produced materials in an American shipyard. In January 1898, Maine sailed from Key West, Florida, to Havana, Cuba, to protect American interests during the ongoing Cuban insurrection against Spain. On 15 February, Maine suffered a tremendous explosion while anchored in the Havana harbor. Of the 350 crew members on board that night, 252 were dead or missing. Eight more died in the hospital in the following days. A court of inquiry was convened, but no conclusive evidence was found to determine who, or what, caused the explosion. This incident was to be one of the precipitating factors for the Spanish-American War. 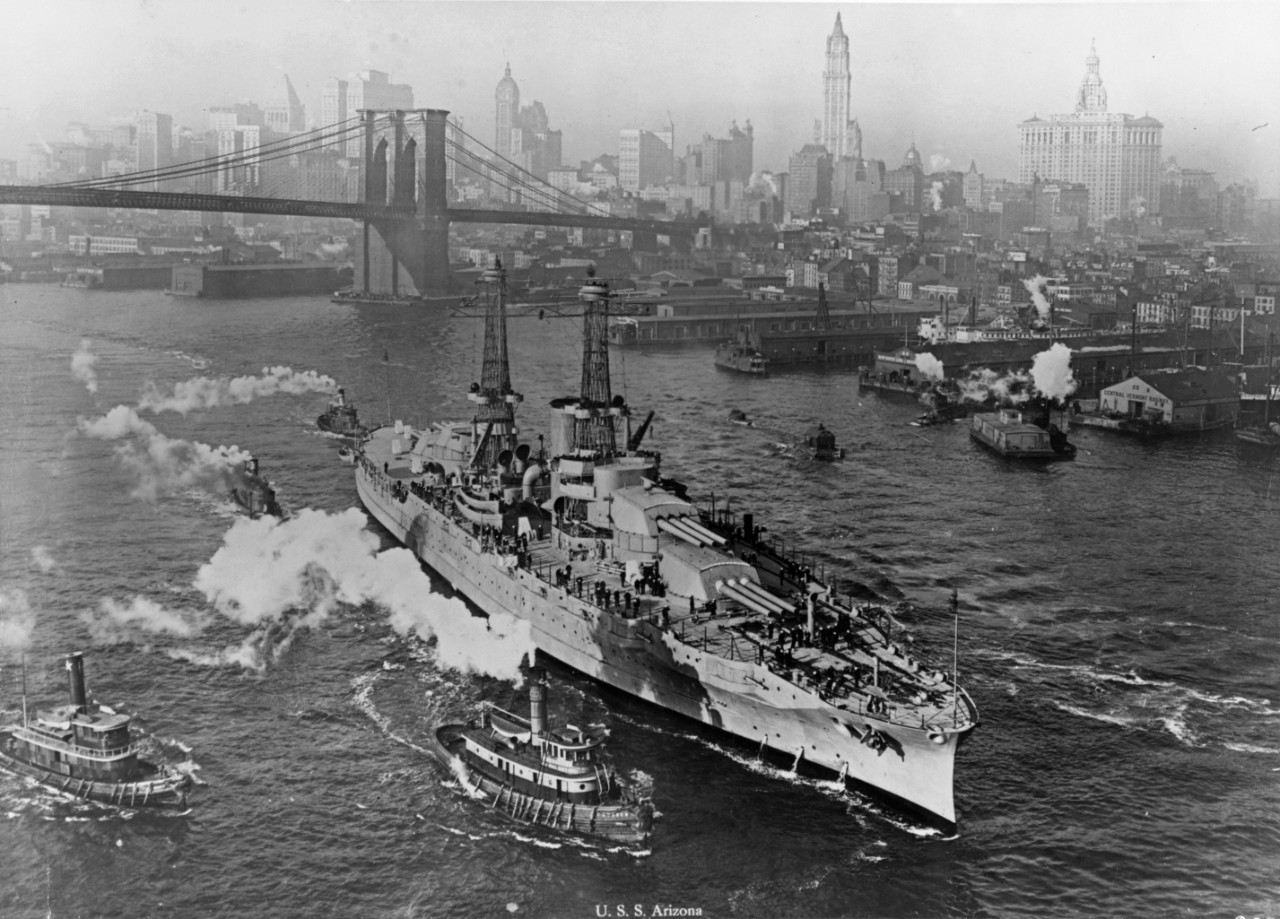 USS Arizona (BB-39) in the East River, New York City, at the time of her sea trials, circa mid-1916. She is accompanied by many tugs, and has small pine trees mounted in her mast tops—an old shipwright’s tradition (NH 94785).

While Tennessee would go on to survive the Pearl Harbor attack and join five other American battleships in confronting  Japanese naval forces in the Battle of Surigao Strait in 1944, Arizona was never to leave Pearl Harbor. On 7 December 1941, Arizona took two direct bomb hits during the Japanese surprise attack. The most disastrous was a 1,760-pound bomb that exploded her magazines and ripped her apart. Her remains were constructed into a memorial at Pearl Harbor, to honor the lives of the 1,177 men aboard who lost their lives on the “Day of Infamy.”

During World War II, the shipyard acquired 49 acres of land that were formerly occupied by Wallabout Market—a produce market where Long Island farmers would sell their products. On this added acreage, the Navy built two more dry docks to facilitate the construction of battleships.

During this era, the Navy Yard was at its busiest ever, earning the nickname “Can-Do Shipyard.” Its primary responsibility during this time was ship repair. It repaired 5,000 battle-damaged ships (both American and Allied) and converted 250 to warship standards. One of its most notable repair jobs during this time was USS Franklin (CV-13). The carrier had been hit by two 550-pound semi-armor-piercing bombs while operating off Japan on 19 March 1945. The initial explosions caused by the bombs were followed by a series of heavier explosions that lasted for five hours. The fires ignited aircraft, fuel, and ammunition. After the crew had contained the fires and evacuated the wounded, the carrier was towed part of the way back to New York until it regained steering control. Once in New York, about 80 percent of the carrier’s superstructure had to be cut away and rebuilt, all her armament replaced, and the entire ship rewired. 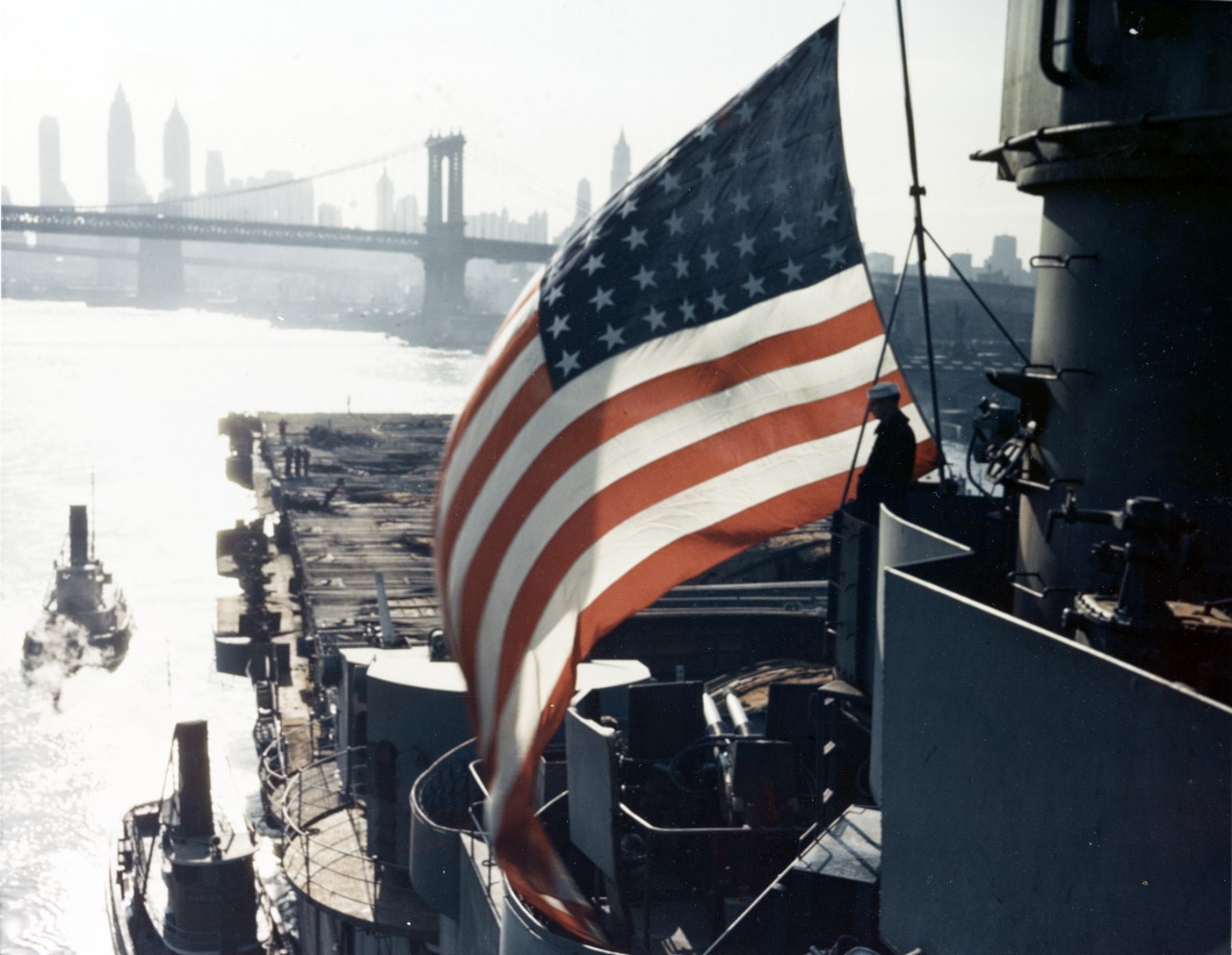 USS Franklin (CV-13) arrives at New York Navy Yard for repair of battle damage, 28 April 1945. She is photographed looking aft, showing her burned-out after-flight deck, with Manhattan beyond. Note oversize battle ensign flying from rear of her island. The New York City skyline and Brooklyn Bridge may be seen in the distance (80-G-K-6065).

To meet the increased wartime operations tempo, employment surged to its highest point ever—71,000 civilian and naval personnel were employed at the yard during the war.

The Navy Yard aggressively hired women as production workers throughout the war. In January 1945, 4,657 women worked at the shipyard in positions formerly held by males, to include pipefitters, electricians, welders, crane operators, truck drivers, and sheet-metal workers. They worked ten-hour shifts and six-day weeks.

On 2 September 1945, representatives from the Japanese Imperial General Headquarters signed the Instrument of Surrender onboard the yard-built USS Missouri, signaling the end of World War II.

In the years following the war, New York Navy Yard became the primary design yard for the conversion and modernization of Essex-class carriers. These alterations were made to enable the World War II–era carriers to accommodate larger, heavier, and faster jet aircraft.

One of these renovated Essex-class carriers, USS Wasp (CV-18), accidentally rammed the destroyer USS Hobson (DD-464) on 26 April 1952 while participating in night-flying operations en route to Gibraltar. The force of the collision tore Hobson in two, and resulted in the loss of 176 members of her crew. Although Wasp sustained no personnel losses, the collision tore a 30-by-50-foot hole in the carrier’s bow. Wasp traveled stern first back to New York, 1,500 miles away. Alerted that the damaged carrier was on its way, the shipyard was ready to make repairs upon her arrival. Her sister ship, USS Hornet (CV-12) was in dry dock at New York Navy Yard for conversion during this time. Wasp’s damaged bow was removed with blow torches at the Bayonne, New Jersey, annex of the yard. Rather than delay Wasp returning to duty while a new bow was constructed, an 80-foot section of Hornet’s bow was cut away, lifted from the dry dock, then floated by barge to where Wasp was being repaired. The section of Hornet’s bow was attached to Wasp and the carrier returned to duty in 10 days.

On 19 December 1960, while Constellation was being outfitted on the yard, a fire broke out and burned for 12 hours. Fifty workers were killed and 150 were injured. Constellation sustained $75 million in damages and her commissioning was delayed by one year.

The last ship built at the yard was USS Duluth (LPD-6). She was launched there on 14 August 1965. The ship transited to Philadelphia Naval Shipyard on 2 February 1966 to complete her fitting out due to the impending closure of New York Naval Shipyard.

New York Naval Shipyard closed 25 June 1966. It was sold to the city of New York in 1967 to build an industrial park. At the time of its closing, the yard was the employer of more than 9,000 workers and the oldest continually active industrial plant in the state of New York. It is home now to more than 450 businesses, including a movie studio and film school.