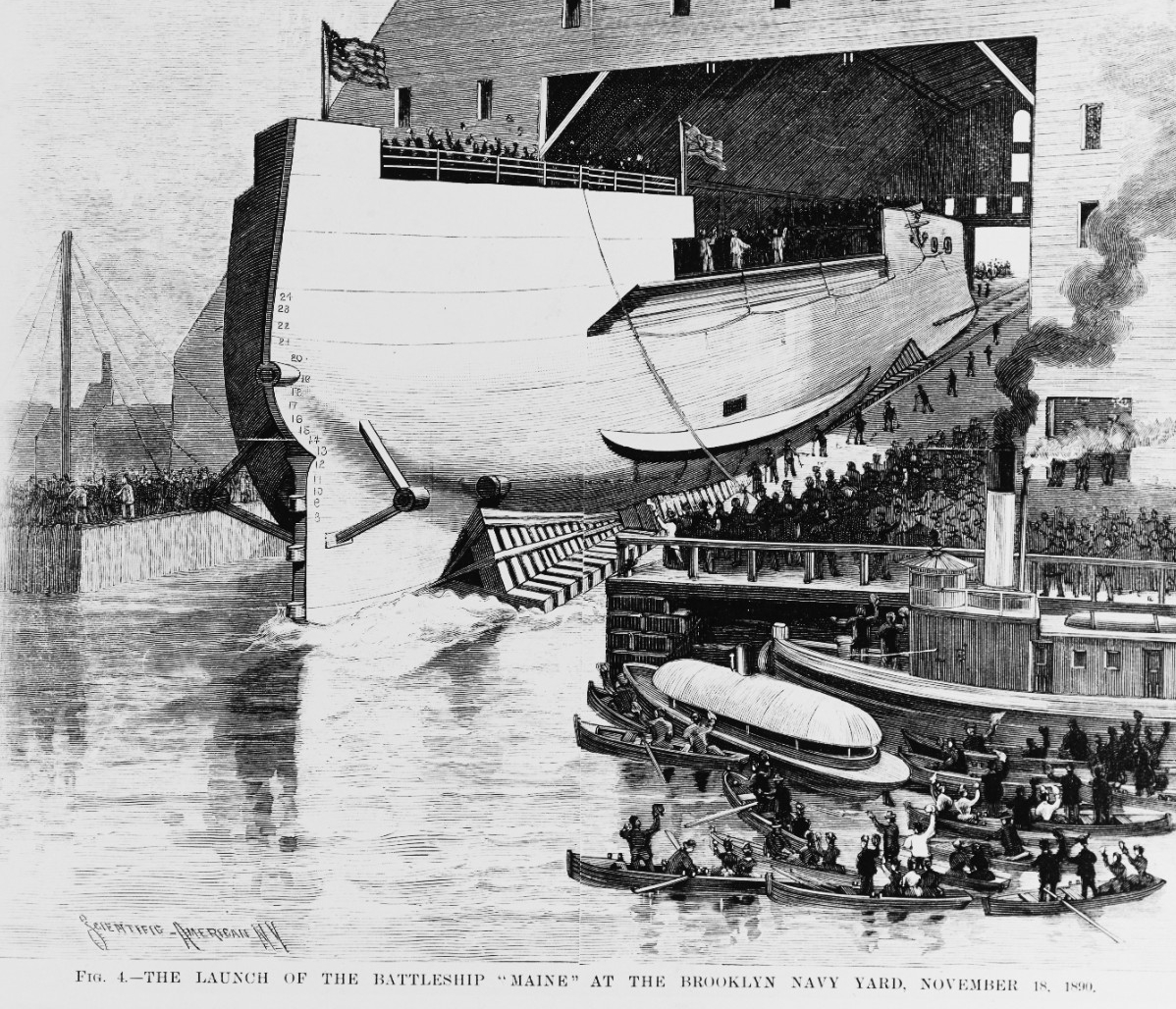 The first Maine, a second‑class armored battleship, was laid down at the New York Navy Yard on 17 October 1888; launched on 18 November 1890; sponsored by Miss Alice Tracy Wilmerding, granddaughter of Secretary of the Navy Benjamin Tracy; and commissioned on 17 September 1895, Capt. Arent S. Crowninshield in command.

Maine departed the New York Navy Yard on 5 November 1895 for Newport, R.I., via Gardiner's Bay, N.Y., to fit out 16 to 23 November, and then proceeded on the 25th to Portland, Maine, to visit her namesake. The ship then put to sea on the 29th on trials and inspection, being assigned to the North Atlantic Squadron on 16 December, and sailing via Newport to Tompkinsville, N.Y., arriving on 23 December. She sailed the next day for Fort Monroe, Va., arriving on Christmas Day. She operated out of that place and Newport News through June 1896 and then on the 4th sailed for Key West on a two‑month training cruise, returning to Norfolk on 3 August. Maine continued extensive east coast operations until late 1897. Then the ship prepared for a voyage to Havana, Cuba, to "show the flag" and to protect American citizens in event of violence in the Spanish struggle with the revolutionary forces in Cuba.

On 11 December 1897, Maine stood out of Hampton Roads bound for Key West, arriving on the 15th. She was joined there by ships of the North Atlantic Squadron on maneuvers, then left Key West on 24 January 1898 for Havana. 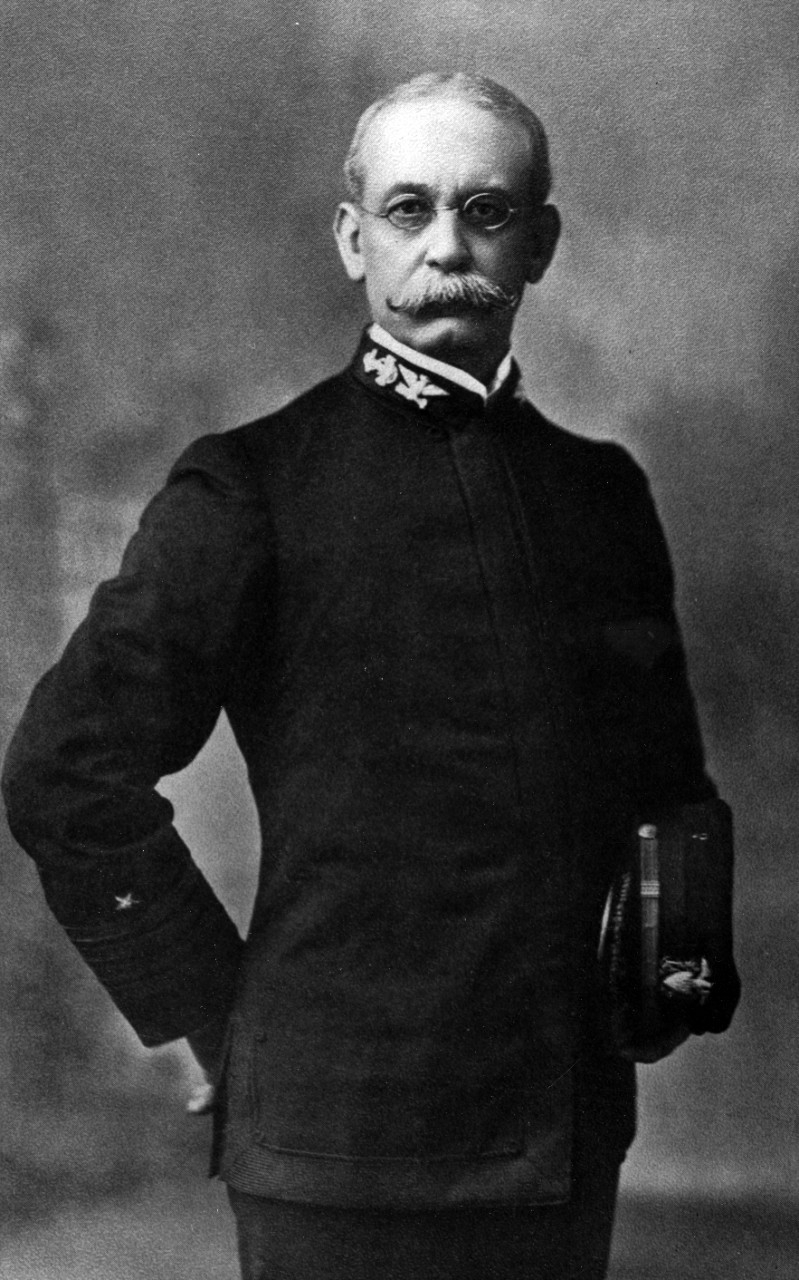 Arriving on 25 January 1898, Maine, Capt. Charles D. Sigsbee, commanding, anchored in the center of the port and remained on vigilant watch. Sigsbee allowed no liberty, and took extra precautions against sabotage. Shortly after 2140 on 15 February, however, a tremendous explosion tore the battleship apart and wrecked the entire forward part of the ship. Out of 350 officers and men on board that night (4 officers were ashore), 252 were dead or missing. Eight more were to die in Havana hospitals during the next few days. The survivors of the disaster were taken on board the Ward Line steamer City of Washington and the Spanish cruiser Alfonso XII.  Spanish officials at Havana showed every attention to the survivors of the disaster and great respect for those killed. The court of inquiry convened in March proved unable to obtain evidence associating the destruction of the battleship with any person or persons, but public opinion in the United States was so inflamed that the Maine disaster led eventually to the declaration of war on Spain on 21 April 1898.

On 5 August 1910, Congress authorized the raising of Maine and directed U.S. Army engineers to supervise the work. Maine's hulk was finally floated on 2 February 1912 and towed out to sea where it was sunk in deep water in the Gulf of Mexico with appropriate ceremony and military honors on 16 March 1912. 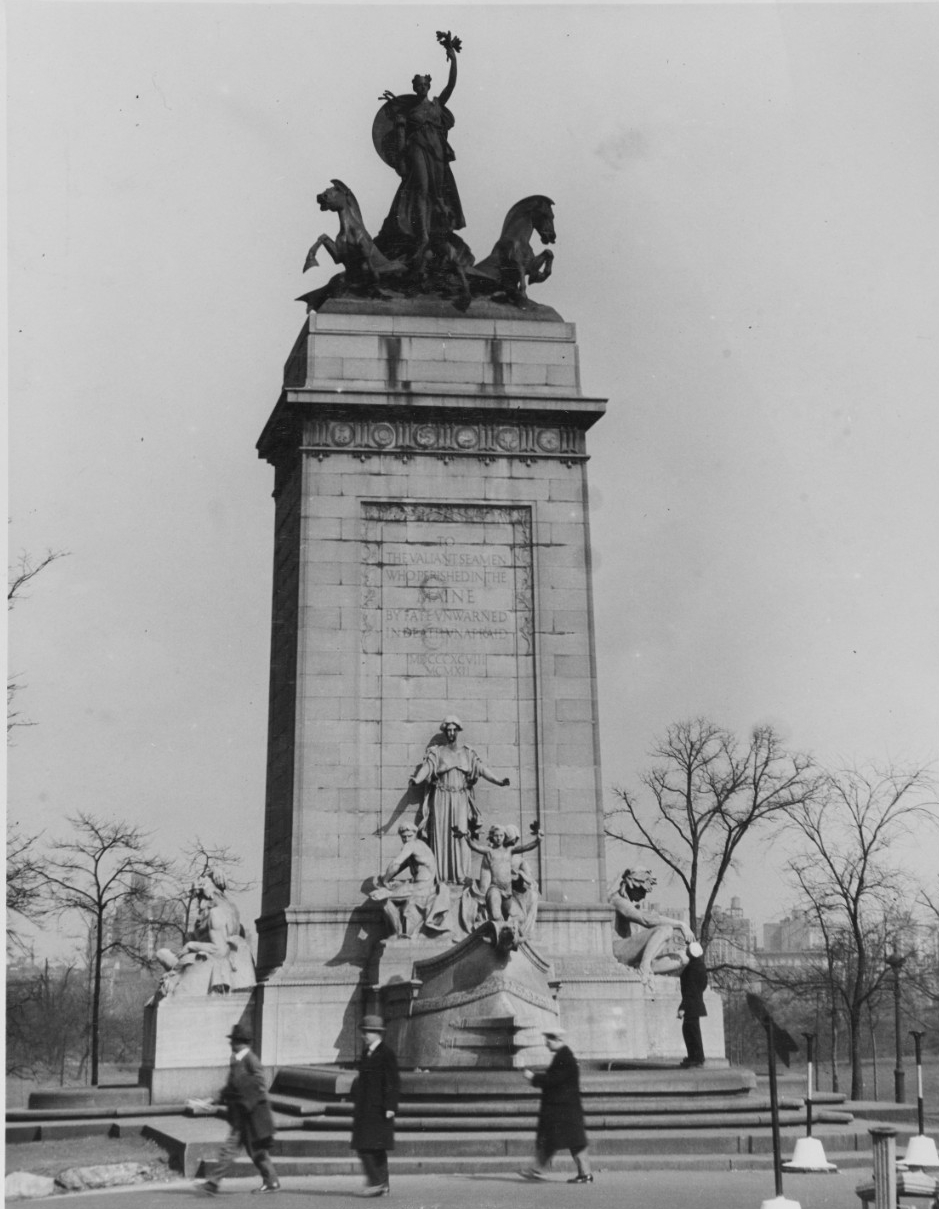 Men near the Maine Memorial "To the valiant seamen who perished in the Maine by fate unwarned, in death unafraid." Copyright Owner: Naval History and Heritage Command. Catalog#: NH 115873.