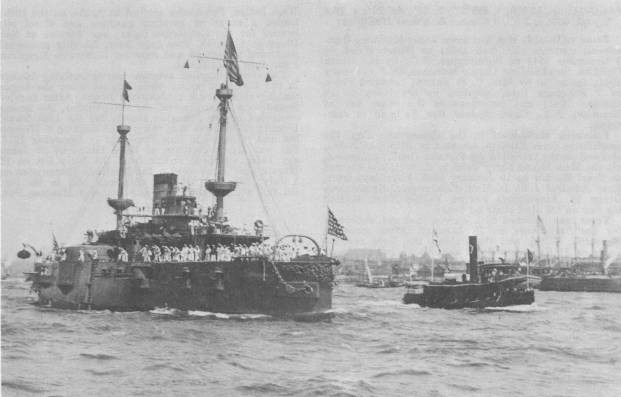 Caption: The first battleship Texas returns to New York in triumph after the battle of Santiago, 1898. (NR&L(0)449)

The first Texas was laid down on 1 June 1889 at Portsmouth, Va., by the Norfolk Navy Yard; launched on 28 June 1892; sponsored by Miss Madge Houston Williams; and commissioned on 15 August 1895, Capt. Henry Glass in command.

Assigned to the North Atlantic Squadron, the warship cruised the eastern seaboard of the United States. In February 1897, she left the Atlantic for a brief cruise to the Gulf coast ports of Galveston and New Orleans. She resumed Atlantic coast duty in March of 1897 and remained so employed until the beginning of 1898. At that time, she visited Key West and the Dry Tortugas en route to Galveston for a return visit which she made in mid-February. Returning to the Atlantic via the Dry Tortugas in March, the warship arrived in Hampton Roads on the 24th and resumed normal duty with the North Atlantic Squadron.

Early in the spring, war between the United States and Spain erupted over conditions in Cuba and the supposed Spanish destruction of the battleship Maine in Havana harbor in February 1898. By 18 May, Texas was at Key West, Fla., readying to prosecute that war.

On the 21st, she arrived off Cienfuegos, Cuba, with the Flying Squadron to blockade the Cuban coast. After a return to Key West for coal, Texas arrived off Santiago de Cuba on the 27th. She patrolled off that port until 11 June on which day she made a reconnaissance mission to Guantanamo Bay. For the next five weeks, she patrolled between Santiago de Cuba and Guantanamo Bay. On 16 June, the warship joined Marblehead for a bombardment of the fort on Cayo del Tore in Guantanamo Bay. The two ships opened fire just after 1400 and ceased fire about an hour and 15 minutes later, having reduced the fort to impotency.

On 3 July, she was steaming off Santiago de Cuba when the Spanish Fleet under Admiral Cervera made a desperation attempt to escape past the American Fleet. Texas immediately took four of the enemy ships under fire. While the battleship's main battery pounded Vizcaya and Colon, her secondary battery joined Iowa and Gloucester in battering two torpedo-boat destroyers. The two Spanish destroyers fell out of the action quickly and beached themselves, heavily damaged. One by one, the larger enemy warships also succumbed to the combined fire of the American Fleet. Each, in turn, sheered off toward shore and beached herself. Thus, Texas and the other ships of the Flying Squadron annihilated the Spanish Fleet.

The defeat of Cervera's Fleet helped to seal the doom of Santiago de Cuba. The city fell to the besieging American forces on the 17th, just two weeks after the great American naval victory. The day after the surrender at Santiago, Spain sought peace through the good offices of the French government. Even before the peace protocol was signed in Washington, D.C., on 12 August, American ships began returning home. Texas arrived in New York on 31 July and remained in nearby waters until late November.

At that time, she moved south to Hampton Roads where she arrived on 2 December. The warship resumed her peacetime routine patrolling the Atlantic coast of the United States. Though her primary field of operations once again centered on the northeastern coast, she also made periodic visits to such places as San Juan, P.R., and Havana, Cuba, where her crew could view some of the results of their own ship's efforts in the recent war.

Texas went out of commission briefly in 1901 for repairs at the Norfolk Navy Yard but was commissioned again on 3 November 1902. She served as flagship for the Coast Squadron until 1905 and remained in that organization after its commander shifted his flag. By 1908, she had become station ship at Charleston, S.C. On 15 February 1911, her name was changed to San Marcos to allow the name Texas to be assigned to Battleship No. 35. On 10 October 1911, her name was struck from the Navy list. She was subsequently sunk as a target in Tangier Sound in Chesapeake Bay.