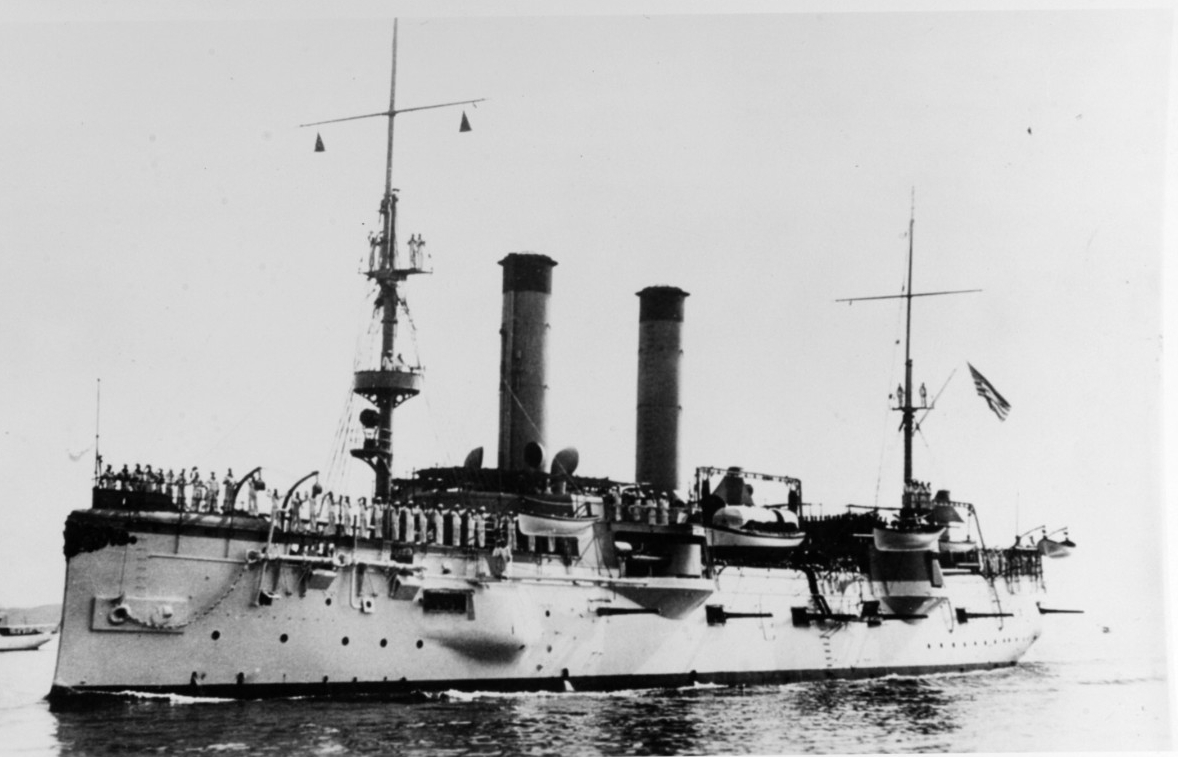 A city in Illinois.

On 7 December 1889 Chicago departed Boston for Lisbon, Portugal, arriving 21 December. The cruiser served in European and Mediterranean waters as the flagship of the Squadron of Evolution until 31 May 1890 when she sailed from Funchal, Madeira, to call at Brazilian and West Indian ports before returning to New York 29 July.

Chicago operated along the east coasts of North and South America and in the Caribbean as flagship of the Squadron of Evolution and, later as flagship of the North Atlantic Squadron, until 1893. After taking part in the International Naval Review in Hampton Roads in April, she left New York 18 June 1893 to cruise in European and Mediterranean waters as flagship of the European station. She returned to New York 20 March 1895 and was placed out of commission there 1 May. Recommissioned 1 December 1898, Chicago made a short cruise in the Caribbean before sailing for the European Station 18 April. She returned to New York 27 September and participated in the naval parade and Dewey celebration of 2 October 1899. Chicago sailed from New York 25 November for an extended cruise, as flagship of the South Atlantic Station until early July 1901, then as flagship of the European Station. With the squadron she cruised in northern European, Mediterranean, and Caribbean waters until 1 August 1903 when she proceeded to Oyster Bay, N.Y., and the Presidential Review.

Between 3 December 1903 and 15 August 1904 Chicago was out of commission at Boston undergoing repairs. After operating along the northeast coast, the cruiser departed Newport News 17 November 1904 for Valparaiso, Chile, arriving 28 December. There, on 1 January 1905 she relieved New York as flagship of the Pacific Station and for 3 years operated off the west coasts of North and South America, in the Caribbean, and to Hawaii.

On 8 January 1908 Chicago departed San Diego for the east coast and in May joined the Naval Academy Practice Squadron for the summer cruise along the northeast coast until 27 August when she went into reserve. Chicago was recommissioned the next summer (14 May-28 August 1909) to operate with the Practice Squadron alone: the east coast, then returned to Annapolis. On 4 January 1910 she left the Academy for Boston, arriving 23 January. She then served in commission in reserve with the Massachusetts Naval Militia until 12 April 1916 and with the Pennsylvania Naval Militia between 26 April 1916 and April 1917.

On 6 April 1917 Chicago was placed in full commission at Philadelphia and reported to Submarine Force, Atlantic, as flagship. On 10 July 1919 she departed New York to join Cruiser Div. 2, as flagship in Pacific. She was reclassified CL-14 in 1921. From Dec. 1919 until Sept. 1923, she served with Submarine Division 14 and as tender at the Submarine Base, Pearl Harbor.

Chicago was decommissioned at Pearl Harbor 30 Sept. 1923; served as a barracks ship until 1935; renamed Alton 16 July 1928 and reclassified IX-5; and sold 15 May 1936. Alton foundered in mid-Pacific in July 1936 while being towed from Honolulu to San Francisco.