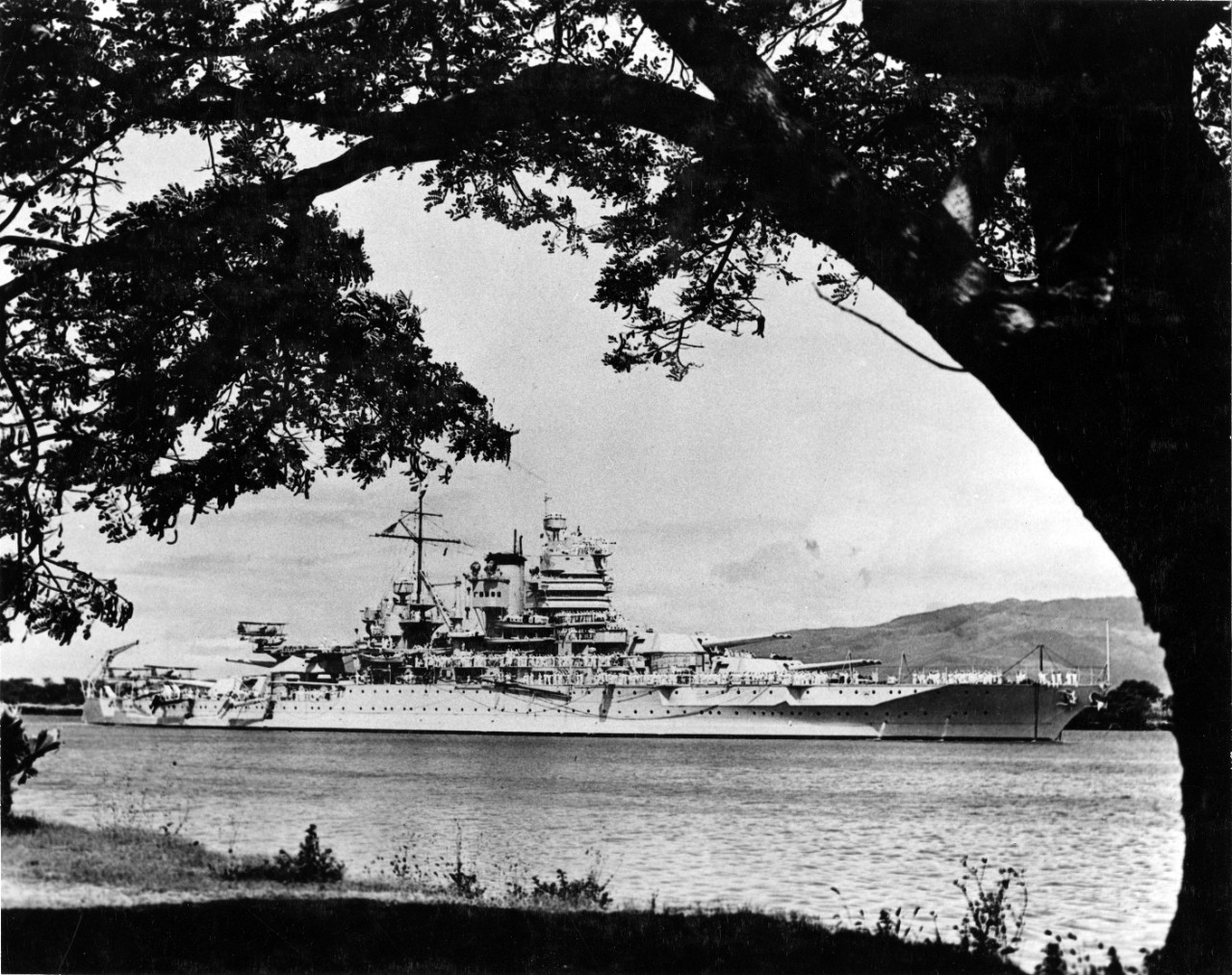 New Mexico, the 47th state, was admitted to the United States in 1912.

New Mexico (Battleship No. 40) was laid down 14 October 1915 by the New York Navy Yard: launched 13 April 1917; sponsored by Miss Margaret C. DeBaca, daughter of the Governor of New Mexico; and commissioned 20 May 1918, Capt. Ashley H. Robertson in command.

After initial training, New Mexico departed New York 15 January 1919 for Brest, France, to escort home transport George Washington carrying President Woodrow Wilson from the Versailles Peace Conference, returning to Hampton Roads 27 February. There on 16 July she became flagship of the newly-organized Pacific Fleet, and three days later sailed for the Panama Canal and San Pedro, Calif., arriving 9 August. The next 12 years were marked by frequent combined maneuvers with the Atlantic Fleet both in the Pacific and Caribbean which included visits to South American ports and a 1925 cruise to Australia and New Zealand.

Modernized and overhauled at Philadelphia between March 1931 and January 1933, New Mexico returned to the Pacific in October 1934 to resume training exercises and tactical development operations. As war threatened, her base was Pearl Harbor from 6 December 1940 until 20 May 1941, when she sailed to join the Atlantic Fleet at Norfolk 16 June for duty on neutrality patrol. When the Japanese attacked Pearl Harbor, she returned to the west coast, and sailed 1 August 1942 from San Francisco to prepare in Hawaii for action. Between 6 December and 22 March 1943, she sailed to escort troop transports to the Fijis, then patrolled the southwest Pacific, returning to Pearl Harbor to prepare for the campaign against the Japanese in the Aleutians. On 17 May she arrived Adak, her base while serving on the blockade of Attu, and on 21 July she joined in the massive bombardment of Kiska that forced its evacuation a week later.

After refitting at Puget Sound Navy Yard, New Mexico returned to Pearl Harbor 25 October to rehearse the assault on the Gilbert Islands. During the invasion, begun 20 November, she pounded Butaritari, guarded transports during their night withdrawals from the islands, and provided antiaircraft cover during unloading operations, as well as screening carriers. She returned to Pearl Harbor 5 December.

Underway with the Marshall Islands assault force 12 January 1944, New Mexico bombarded Kwajalein and Ebeye 31 January and 1 February, then replenished at Majuro. She blasted Wotje 20 February and Kavieng, New Ireland 20, March, then visited Sydney before arriving in the Solomons in May to rehearse the Marianas operation.

New Mexico bombarded Tinian 14 June, Saipan 15 June, and Guam 16 June, and twice helped drive off enemy air attacks 18 June. She protected transports off the Marianas while the carrier task force spelled the doom of Japanese naval aviation in its great victory, the Battle of the Philippine Sea, 19-20 June. New Mexico excorted transports to Eniwetok, then sailed 9 July guarding escort carriers until 12 July, when her guns opened on Guam in preparation for the landings 21 July. Until 30 July she blasted enemy positions and installations on the island.

Overhauled at Bremerton August to October, New Mexico arrived in Leyte Gulf 22 November to cover the movement of reinforcement and supply convoys, firing in the almost daily air attacks over the Gulf, as the Japanese posed desperate resistance to the reconquest of the Philippines. She left Leyte Gulf 2 December for the Palaus, where she joined a force covering the Mindoro-bound assault convoy. Again she sent up antiaircraft fire as invasion troops stormed ashore 15 December, providing cover for two days until sailing for the Palaus.

Her next operation was the invasion of Luzon, fought under a sky full of would-be suicide planes, against whom she was almost continually at general quarters. She fired prelanding bombardment 6 January 1945, and that day took a suicide hit on her bridge which killed her commanding officer, Captain R. W. Fleming, and 29 others of her crew, with 87 injured. Her guns remained in action as she repaired damage, and she was still in action 9 January as troops went ashore. 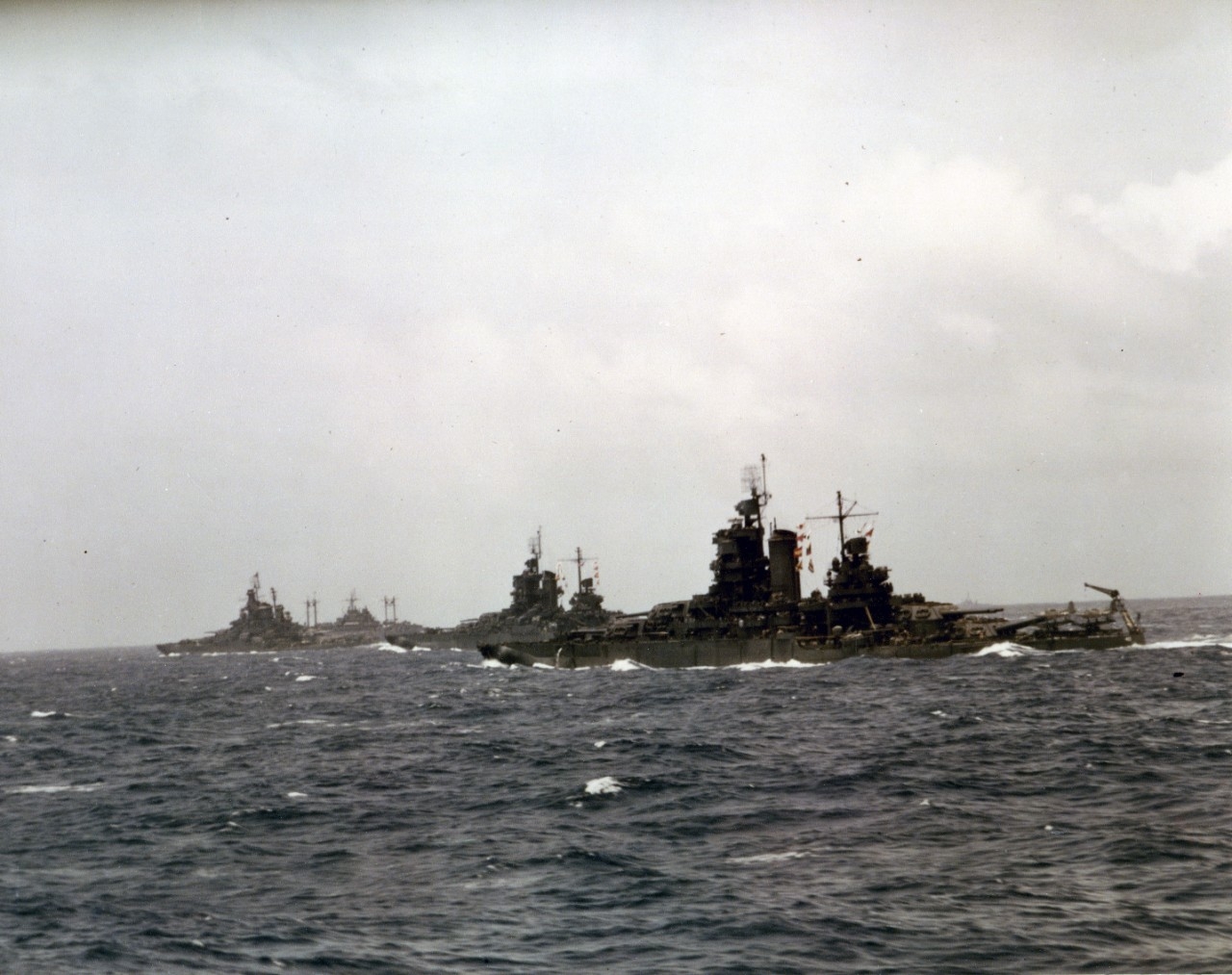 New Mexico (BB-40) at sea with two other battleships and an amphibious force command ship (AGC), probably at the time of the Iwo Jima or Okinawa operations, circa February-April 1945. Battleship in the center background is Idaho (BB-42). The one further to the left is either Tennessee (BB-43) or California (BB-44). Official U.S. Navy photograph now in the collections of the National Archives, 80-G-K-3706.

After repairs at Pearl Harbor, New Mexico arrived at Ulithi to stage for the invasion of Okinawa, sailing 21 March with a heavy fire support group. Her guns opened on Okinawa 26 March, and were not silent until 17 April as she gave every aid to troops engaged ashore. Again on 21 and 29 April she opened fire, and on 11 May she destroyed 8 suicide boats. While approaching her berth in Hagushi anchorage just after sunset 12 May, New Mexico was attacked by two suicides; one plunged into her, the other managed to hit her with his bomb. She was set on fire, and 54 of her men were killed, with 119 wounded. Swift action extinguished the fires within half an hour, and on 28 May she departed for repairs at Leyte, followed by rehearsals for the planned invasion of the Japanese home islands. Word of the war-s end reached her at Saipan 15 August, and next day she sailed for Okinawa to join the occupation force. She entered Sagami Wan 27 August to support the airborne occupation of Atsugi Airfield, then next day passed into Tokyo Bay to witness the surrender 2 September.

New Mexico was homeward bound 6 September, calling at Okinawa, Pearl Harbor, and the Panama Canal before arriving Boston 17 October. There she decommissioned 19 July 1946. She was sold for scrapping 13 October 1947 to Lipsett, Inc., New York City.