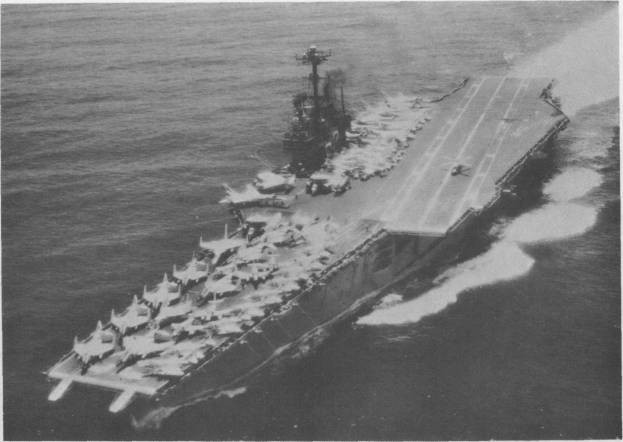 The fifth Independence (CVA-62) was launched by New York Navy Yard 6 June 1958; sponsored by Mrs. Thomas Gates, wife of the Secretary of the Navy; and commissioned 10 January 1959; Captain E. Y. McElroy in command.

One of the newest class of "supercarriers" at the time of her commissioning, Independence conducted shakedown training in the Caribbean and arrived her home port Norfolk, 30 June 1959. She operated off the Virginia Capes for the next year on training maneuvers, and departed 4 August 1960 for her first cruise to the Mediterranean. There she added her great strength to the peace-keeping power of the 6th Fleet in that troubled region, remaining in the eastern Mediterranean until her return to Norfolk 3 March 1961. The remainder of the year was spent in training and readiness operations off the Atlantic Coast.

Independence sailed 19 April 1962 for 6th Fleet Duty in support of President Kennedy's firm stand on Berlin during a reoccurrence of stress in a critical area. She returned to Norfolk 27 August and sailed 11 October for the Caribbean Sea. She arrived off Puerto Rico in response to the Communist defiance in the Cuban Missile Crisis and took part in the quarantine operations which finally forced withdrawal of the Russian missiles. She then returned to Norfolk 25 November for readiness exercises along the eastern seaboard, overhaul in the Norfolk Naval Shipyard, and refresher training out of Guantanamo Bay.

Independence departed Norfolk 6 August 1963 to take part in combined readiness exercises in the Bay of Biscay with sea-air units of the United Kingdom and France; then entered the Mediterranean 21 August for further duty with the 6th Fleet. Cruising throughout the Mediterranean, she gained much valuable experience during combined NATO exercises, including close air support to Turkish paratroops, reconnaissance, communications, and convoy strike support. President Makarios of Cyprus paid her a visit 7 October, after which she joined in bilateral U.S.-Italian exercises in the Adriatic with Italian patrol torpedo boats, and U.S.-French exercises which pitted her aircraft against French interceptors and a surface action with French cruiser Colbert. She returned to Norfolk 4 March 1964.

Following training exercises ranging north to New York and south to Mayport, Fla., Independence departed Norfolk 8 September 1964 for NATO "Teamwork" exercises in the Norwegian Sea and off the coast of France, thence to Gibraltar. She returned to Norfolk 5 November 1964 and entered the Norfolk Naval Shipyard for overhaul.

The first Atlantic Fleet carrier to deploy to the South China Sea in support of Vietnam operations, Independence and her embarked Air Wing 7 received the award of the Navy Unit Commendation for exceptionally meritorious service from 5 June to 21 November 1965. They participated in the first major series of coordinated strikes against vital enemy supply lines north of the Hanoi-Haiphong complex, successfully evading the first massive surface-to-air missile barrage in aviation history while attacking assigned targets, and executing, with daring and precision, the first successful attack on an enemy surface-to-air missile installation. The carrier launched more than 7,000 sorties in sustaining an exceptional pace of day and night strike operations against military and logistic supply facilities in North Vietnam. "The superior team spirit, courage, professional competence, and devotion to duty displayed by the officers and men of Independence and embarked Attack Carrier Air Wing 7 reflect great credit upon themselves and the United States Naval Service."

Independence returned to her homeport, Norfolk, Va., in December, arriving the 31st. During the first half of 1966, she operated off Norfolk, replenishing and training air groups. On 4 May she participated in Operation "STEIKEX." The carrier departed Norfolk 13 June for European operations with the 6th 'Fleet. Independence was involved with unit and NATO exercises from July into December. She then continued her 6th Fleet deployment into 1967.