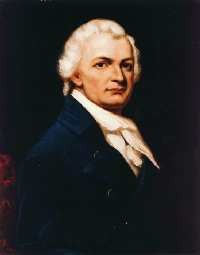 Born in Charles County, Maryland, and educated as a merchant, Benjamin Stoddert served during the American Revolution as a captain in a Pennsylvania regiment, and later as secretary to the Continental Board of War. In 1781 he married Rebecca Lowndes, daughter of a Maryland merchant, and set up in the mercantile business in Georgetown, Maryland. Eight children blessed their union. After George Washington was elected president of the United States, he asked Stoddert to purchase key parcels of land in the area that would become the nation's capital, before the formal decision to establish the federal city on the banks of the Potomac drove up prices there. Stoddert then transferred the parcels to the government. He also helped found the Bank of Columbia to handle purchases of land in the District of Columbia for the federal government. Following his term as Secretary of the Navy, 1798-1801, Stoddert's final years witnessed a decline in his fortunes: as Stoddert lost heavily in land speculation, Georgetown declined as a commercial center, and the Embargo and the War of 1812 brought American overseas trade to a halt.

In 1798 President John Adams appointed Benjamin Stoddert, a loyal Federalist, to oversee the newly established Department of the Navy. As the first Secretary of the Navy, Stoddert soon found himself dealing with an undeclared naval war with France, which would come to be known as the Quasi-War. Stoddert realized that the infant Navy possessed too few warships to protect a far-flung merchant marine by using convoys or by patrolling the North American coast. Rather, he concluded that the best way to defeat the French campaign against American shipping was by offensive operations in the Caribbean, where most of the French cruisers were based. Thus at the very outset of the conflict, the Department of the Navy adopted a policy of going to the source of the enemy's strength. American successes during the conflict resulted from a combination of Stoddert's administrative skill in deploying his limited forces and the initiative of his seagoing officers. Under Stoddert's leadership, the reestablished United States Navy acquitted itself well and achieved its goal of stopping the depredations of French ships against American commerce.

Stoddert concerned himself not only with the Navy's daily administration and operations, but also with the service's future strength. He established the first six navy yards and advocated building twelve ships of the line. Congress initially approved construction of six ships of the line, but following the peace accord with France, changed its mind, eliminating the ships of the line and reducing the officer corps. Stoddert left a legacy of able administration and successful war fighting. Despite subsequent shifting political sentiments, the American people would ever after depend on the Navy to defend their commerce and assert their rights on the high seas.

Stoddert established the Navy Department Library as a result of instructions received from President Adams in a letter dated 31 March 1800.

DeConde, Alexander. The Quasi-War: The Politics and Diplomacy of the Undeclared War with France, 1797-1801. New York: Charles Scribner's Sons, 1966.

ALS dated 7 June 1800, Navy Department. To Stephen Mayhew, Commissioner of Loans, Philadelphia. Regarding regulations for payment of pensions to persons disabled in the Navy Service.