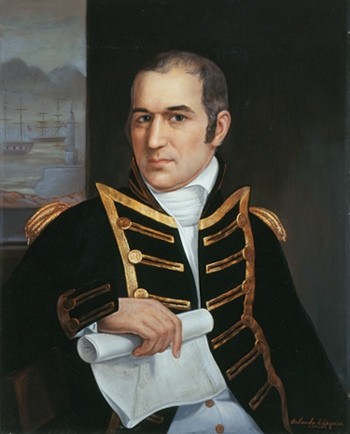 Born at Falmouth, Maine, Edward Preble was the fourth child and third son of General Jedidiah Preble, an officer of the Revolution. His great-grandfather was Abraham Preble, having settled in Scituate, Massachusetts, about 1636. His mother, Mehitable (Bangs) Roberts, was the second wife of General Preble. Edward was educated at Dummer Academy, Newbury, Massachusetts. He married Mary Deering on 17 March 1801, and they had one son.

At the age of sixteen Preble ran away to sea on a privateer of Newburyport, and in 1779 was appointed a midshipman on the frigate Protector of the Massachusetts navy. This ship fought two actions with the British ships Admiral Duff and Thames. In 1781 she was captured and Preble was confined for a time on the prison-ship Jersey. In 1782 he was a lieutenant under Captain George Little on the Massachusetts cruiser Winthrop, which succeeded in taking five prizes. After the Revolution he spent fifteen years in the merchant service and visited many parts of the world, being once captured by pirates.

Upon the opening of hostilities with France in 1798, he was appointed a lieutenant in the navy and was given command of the brig Pickering in the squadron of Commodore John Barry in the West Indies. He received a commission as captain on 15 May 1799 and was ordered to the new frigate Essex. The frigate Congress and the Essex set sail with a convoy of merchant men for the East Indies in January 1800, but six days out the Congress was dismasted in a gale and the Essex proceeded alone. She was the first American warship to show the flag beyond the Cape of Good Hope. After cruising for two months about the Straits of Sunda, rendering important service in protecting American trade from French privateers, the Essex sailed for home with a convoy of fourteen vessels, arriving at New York in November.

The naval war with France was scarcely brought to a close before the war with Tripoli began and in 1803 Preble was put in command of the third squadron to be sent to the Mediterranean. His flagship was the Constitution and the squadron included six other vessels: the frigate Philadelphia, the brigs Siren and (Argus), and the schooners Vixen, Nautilus, and Enterprise. Each vessel sailed when ready and the Constitution was the fourth to get away on 14 August 1803, arriving at Gibraltar on 12 September. After working on a difficulty with Morocco in November, Preble sailed east for the rendezvous with the squadron. Before reaching Syracuse, however, he learned of the capture of the Philadelphia by the Tripolitans and the captivity of Captain William Bainbridge with more than 300 members of the crew. The Philadelphia, lying in the harbor of Tripoli, was later destroyed by a prize ketch called the Intrepid, commanded by Stephen Decatur. Meanwhile, the blockade of Tripoli had been proclaimed by the commodore and was maintained, as well as circumstances permitted, by the squadron. At the same time, the squadron was also employed in cruising and in preparing for an attack upon the town. Preble borrowed two mortar-boats and six gunboats from the king of the Two Sicilies. Aside from these auxiliaries the squadron comprised the six American vessels and two prizes taken into the service, the Intrepid and the brig Scourge. The squadron carried forty-two heavy guns, one on each gunboat and the others on the Constitution, all the other vessels' guns being too light for assaulting the enemy's batteries.

The commodore had under his command 1060 officers and men. Tripoli was defended by strong forts and batteries, many gunboats, several larger vessels, and 25,000 men. After much delay because of bad weather, the first assault on Tripoli was made on 3 August 1804. Most of the fighting was done by the gunboats, which closed with the enemy's gunboats and necessitated many desperate hand-to-hand contests. The squadron bombarded the town, inflicting considerable but not vital damage. The Americans were victorious at sea, three of the enemy's gunboats being captured and three sunk. Four subsequent attacks were made, two of them at night, with great loss to the enemy, but Tripoli was not captured. On the night of 4 September, the Intrepid, with 15,000 pounds of powder on board and commanded by Richard Somers, was sent into the harbor to be exploded in the midst of the Tripolitan fleet, but for some reason never explained, the explosion was pre-mature and all hands perished. Preble's total loss during the summer, including the crew of the Intrepid, was thirty killed and twenty-four wounded.

Soon after this a larger and more powerful squadron appeared under the command of Commodore Samuel Barron and Preble was superseded. Very little was accomplished by Barron's squadron and the next year peace was reached with Tripoli on terms far from satisfactory. After his return home Preble was employed in building gunboats for the navy. His health, which had long been declining, turned for the worse and he died at Portland at the early age of forty-six on 25 August 1807.

The second Preble, a sloop-of-war built by the Portsmouth (N.H.) Navy Yard, was launched 13 June 1839 and commissioned the following year, Comdr. Samuel L. Breese in command.