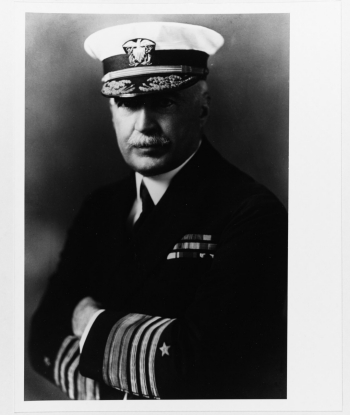 Joseph Strauss was born in Mount Morris, New York, on 16 November 1861, the son of Raphael and Sarah Metzger Strauss. He was appointed Cadet Engineer from Virginia and entered the US Naval Academy, Annapolis, Maryland, on 1 October 1881. He completed the four-year course in June 1885, and served the two years at sea then required by law before commissioning on board USS Omaha and USS Marion. Commissioned Ensign in the US Navy on 1 July 1887, he advanced to the rank of Rear Admiral (temporary) on 21 October 1913, and to Rear Admiral (permanent) to date from 30 June 1919. He held the rank of Admiral while serving as Commander in Chief, US Asiatic Fleet, February 1921 October 1922; was transferred to the Retired List of the Navy in the rank of Rear Admiral, 16 November 1925; and on 21 June 1930 (by Act of Congress of that date) was advanced to the highest rank held on active duty, that of Admiral.

On 1 July 1887, he was ordered to the Coast Survey Steamer Gedney, then engaged in hydrographic surveys of the East and West Coasts and Alaska. He was detached in November 1890, joined USS Concord in January 1891, and served as Watch and Deck Officer of that vessel for two years. From March to June 1893 he was a member of the General Court Martial, Norfolk, Virginia, then reported to the Bureau of Ordnance, Navy Department, Washington, DC, for a tour of duty which was the beginning of his noteworthy career as a specialist in ordnance. While there he designed the first heavy gun mounts to be operated by electricity, a system which soon became standard in the Navy.

On 20 November 1895, he reported as Watch and Deck Officer on board USS Indiana, and on 8 February 1896, was recalled from sea duty to serve at the Navy Yard, Washington, DC. He remained there for ten months, then on 8 December 1896, joined USS Castine. During the Spanish-American War he served as Acting Assistant Paymaster on board USS Castine, USS Cushing and later USS Lancaster, and in the latter vessel participated in the blockade of the Cuban Coast. In October 1899 he  was transferred to USS Amphitrite for brief duty, and a month later was again assigned to the Bureau of Ordnance, Navy  Department.

He established and served as Inspector of Ordnance in Charge of the Naval Proving Ground, Indian Head, Maryland, from January 1900 until December 1902. During that period he served also as a member of the Torpedo Station Board in June 1901. He had six months' duty at sea in the monitor Arkansas, and after his detachment on 29 June 1903, served successively as a member of the Board at the Navy Yard, Washington, DC, and as Judge Advocate of the General Court Martial, Navy Yard, Norfolk, Virginia. Returning to USS Arkansas, served from October 1905 until February 1906 as her Executive Officer and Navigator.

In March 1906 he returned to the Bureau of Ordnance to serve as a member of a Special Board on Naval Ordnance, and on 30 April became Inspector of Ordnance in Charge of the Naval Proving Ground, Indian Head, for the second time. While so assigned he served as a member of the Army and Navy Joint Board on Smokeless Powders in March 1907. On 6 June 1908, he was ordered detached and to USS Montana, and at the commissioning of that vessel on 21 July he became her Executive Officer. He remained at sea until November 1908, and on 3 December again became a member of the General Court Martial, Norfolk.

On 15 April 1909, he assumed command of USS Montgomery, and during the next two years did experimental work in torpedoes. In May 1911 he returned to the Navy Department, where he served as Assistant to the Aid for Material until September 1912. He commanded USS Ohio from 3 October that year, during divisional target practice in October 1913, and on 21 October 1913, was commissioned Chief of the Bureau of Ordnance, Navy Department, with rank of Rear Admiral for a term of four years. Before the end of the term, however, he resigned as Chief of the Bureau of Ordnance, his resignation approved by the President of the United States, effective 22 December 1916.

On 30 December 1916, he assumed command of USS Nevada, and was serving as the second Commanding Officer of that battleship when the United States declared war on Germany on 6 April 1917. Detached from that command in February 1918, he had temporary duty in the Office of the Chief of Naval Operations, and in March became Commander Mine Force, Atlantic Fleet. In this command he was responsible for laying the North Sea mine barrage, one of the major operations of the war, which contributed to the failure of the German submarine campaign and the breakdown in the morale of the German people. The laying of the mine fields and their removal were arduous and dangerous tasks and the manner of their performance reflected great credit on Admiral Strauss and the officers and men under his command. He was awarded the Distinguished Service Medal and cited as follows:

"For exceptionally meritorious service in a duty of great responsibility as Commander of the Mine Force, Atlantic Fleet, engaged in laying a mine barrage in the North Sea, and later in sweeping up these mines and making navigation safe in that locality."

He was also decorated by the King of England, on the quarter-deck of the flagship of the British Commander in Chief, presented with the Knight Commander of St Michael and St George, awarded by the Government of Great Britain and Ireland. In addition he was awarded the Second Order of the Sacred Treasury by the Japanese Government and the Croix de Commander de la Legion d'Honneur by the French Government, and the Order of Yun Hui by the Chinese Government.

Admiral Strauss remained in command of the Mine Force, Atlantic Fleet, until October 1919, at which time he returned to the Navy Department to serve as a member of the General Board. In March 1921 he was commissioned Commander in Chief, Asiatic Fleet, and served in that command in the rank of Admiral until October 1922, when he resumed duty with the General Board. In July 1923 he was assigned additional duty as Representative of the Navy in matters concerning the Budget, coordinating all work of the Budget with Congress in connection with appropriations. He served in that capacity until transferred to the Retired List upon reaching the statutory retirement age of sixty-four years on 16 November 1925, and was relieved of all active duty.

At the request of Assistant Secretary of the Navy Charles Edison, on 8 October 1937, Admiral Strauss was appointed a member of the Advisory Board on Battleship Plans (BBs 55 and 56). He was again relieved of all active duty on 8 February 1938.

In addition to the Distinguished Service Medal and his foreign decorations, Admiral Strauss had the Sampson Medal; the Spanish Campaign Medal; and the World War I Victory Medal, with Mine-Laying Clasp.

Admiral Strauss died at the Naval Hospital, Bethesda, Maryland, on 30 December 1948. On 3 January 1949, he was buried in Arlington National Cemetery.

Admiral Strauss contributed much to the field of ordnance. He designed the first spring recoil gun mount used in the Navy and the first disappearing mount for deck guns of submarines. He developed the 12-inch gun which became fore-runner of the big gun main batteries, and was a pioneer in the field of smokeless powder development. He received a special letter of appreciation from the Secretary of the Navy (Charles F. Adams) in 1929 for his work in connection with safety devices of submarines and the salvaging of sunken submarines. Secretary of the Navy Josephus Daniels commended him for sweeping the North Sea barrage of American mines, as follows:

"It is with the greatest of pleasure that the Secretary of the Navy congratulates the officers and men of the North Sea Mine Detachment on having so creditably completed the stupendous task of clearing the North Sea of the mines planted by our Navy during the War. This most arduous and dangerous work, one of the greatest and most hazardous tasks undertaken by the Navy and which has been carried on with cheerfulness and integrity, will go down in the annals of Naval History as one of the Navy's greatest achievements. Every loyal citizen of the United States and every officer and men of the Navy must look with pride upon these men who have once again fulfilled the glorious traditions of the service which they represent."